Posted on August 7, 2020 by LBcruiseshipblogger

People might not expect to see colonial Russian architecture in China, but Dalian – a modern port city on the Liaodong Peninsula, at the southern tip of China’s Liaoning Province – was founded by the Russians in 1898. Russian style buildings (not surprisingly) can be found along Russian Street. Zhongshan Square also sports colonial buildings in Renaissance and other styles. It’s the second largest city in the province and the largest seaport in northern China.

Xinghai Square is the largest city square in the world. The name means Sea of Stars.

view from the open book monument of a former Russian castle, now the most expensive hotel in town

Dalian is a popular tourist destination, more so for travelers within China than with visitors from overseas. The city proper is less industrial than neighboring cities, keeping most manufacturing to the industrial zone. It has parks, gardens, beaches and some hotels and coffee houses marketed to non-Chinese tourists. Locals mainly speak Mandarin and are not likely to know English, though there are enough who do that English-speaking tour guides are available for cruise ship excursions.

a bus passes a street cleaner

Public transportation is available in the form of busses, trains and taxis. Taxi drivers may not speak English so have your destination in writing. Watch out for illegal taxis which tend to overcharge. The best taxis have blue or white lights on top. Make sure the driver uses the meter to avoid overcharges. Avoid taxis with yellow lights on top as they are the lowest ranked.

Things to do or see in Dalian include a zoo, aquariums, museums, scenic and historical sites, mountains, and parks. Spring and fall are the best times to visit as summers are warm and wet and may experience monsoons. Winters are windy and cold. Dalian has many parklike squares, often with historical connections.

view of Dalian from the Westerdam

Dalian is the biggest cruise ship port in China. It’s within walking distance of town if you don’t mind a bit of a hike. The port provided our ship with a free shuttle to the Friendship Store. Taxis are readily available and can take passengers on tour to places of interest. A guide book or map with both English and Chinese characters for each location is quite helpful for communicating with taxi drivers on what you would like to see. Currency is the yuan. One US dollar is currently worth nearly 7 yuan. Money exchange is available at banks and ATMs, or you can exchange money on the ship, but it is easiest to get money from your bank before leaving home. Your bank isn’t likely to have Chinese money on hand so ask at least a week in advance of the departure date for your trip. Most of the ports we visited had money exchange at the terminal, but occasionally they weren’t open so it’s best to come prepared. 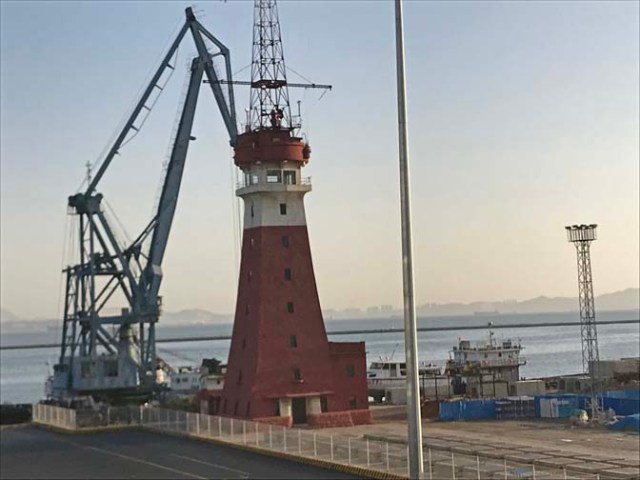 lighthouse at the end of the cruise ship dock

Restrooms in the port have squat toilets rather than the western style sit on toilets most cruise ship passengers are accustomed to. There also is no toilet paper in the stalls and the holder at the restroom entrance was empty when we were there so be sure to bring your own tissue as you may not find it available in other public restrooms either. The squat toilets are recessed into the floor and you squat over them, similar to going out in the woods if you’ve ever gone hiking, camping, or trail riding far from public facilities. Mainly you just have to make sure your shoes and clothing are out of the way and aim for the bowl. From the looks of the floor surrounding it not everyone was successful in that endeavor. Perhaps they have not previously found a need to squat in the woods. This style toilet is likely to be found in public areas in China.

While there is a lot to see in Dalian, the best things are not in walking distance of the port. 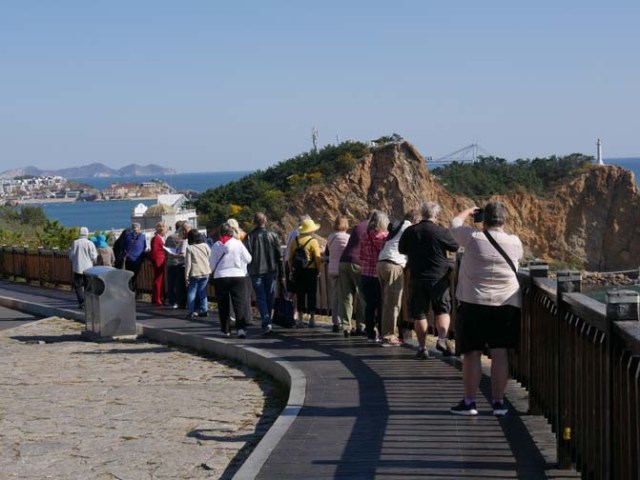 Our ship had just 4 excursions offered in Dalian. Favorites: visited a family’s home, a nursery school, an aquarium, People’s Square, and had lunch. Highlights: also visited a nursery school and People’s Square as well as Beida Bridge and Labour Park. Tram Tour: started with a walk through Russian Street and then took a tram tour through eastern Dalian with lunch and a stop at Sea & Star Square. Panoramic Dalian: had scenic drives through town and along the seashore, with a couple viewpoint photo stops, a walk through Xinghai Square, and a walk across Beida bridge.

MyCruiseStories blog tells stories about adventures in cruising on ships big and small. Things to do onboard and in port. Anything connected to cruising. Also food, travel, recipes, towel animals, and the occasional random blog.
View all posts by LBcruiseshipblogger →
This entry was posted in China, Holland America, Ports of Call, Westerdam and tagged #dalianchina, China, cruise, Dalian, Dalian China cruise ship port, photos, travel. Bookmark the permalink.