Posted on November 15, 2019 by LBcruiseshipblogger

We started our port stop from Holland America Westerdam in Beppu, Japan with a visit to Takasakiyama Monkey Park. This park sits at the base of Mt. Takasaki, and is populated by wild macaque monkeys. A sign at the entrance says Welcome to Mt. Takasaki National Wildlife Park (Macaque Reserve) in several different languages including English. Monkeys live on the mountain and are fed at the park to keep them from venturing out into populated areas. Two different troops of monkeys living on the mountain use the feeding area. One comes down to the park in the morning and the other in the afternoon.

The park opened in 1953 as a tourist attraction, though feeding the monkeys started in 1952 as a means of keeping them out of crops and populated areas. Opening the monkey park turned them from hunted pests pillaging nearby farms to a money-making tourist attraction. Mt. Takasaki is a natural habitat for these monkeys, who have lived there for centuries.

The main viewing area is at the Manjuji branch temple grounds. There are old temple buildings around the level area where the monkeys gather for feedings.

At the entrance to the monkey park you have the option of buying an entrance ticket and walking up to where the monkeys hang out or for an additional fee adding on a monorail ride to the monkey area. The monorail track looks something like a single train track and the cars resemble in appearance a funicular with double cars more than the average monorail, though they do not function like a funicular.

mother monkey with a baby on her back

Unless someone in your party has mobility issues it is actually faster to walk up, but rides in any form are always fun. If you take the monorail up you can still walk down or even down and back up if you want to. However you get up the hill, once there monkeys are everywhere. We saw far more mothers with babies and half grown youngsters than mature males at the time we were there. Some mothers had a small baby riding on their back or under their belly and an older youngster scampering along beside them. 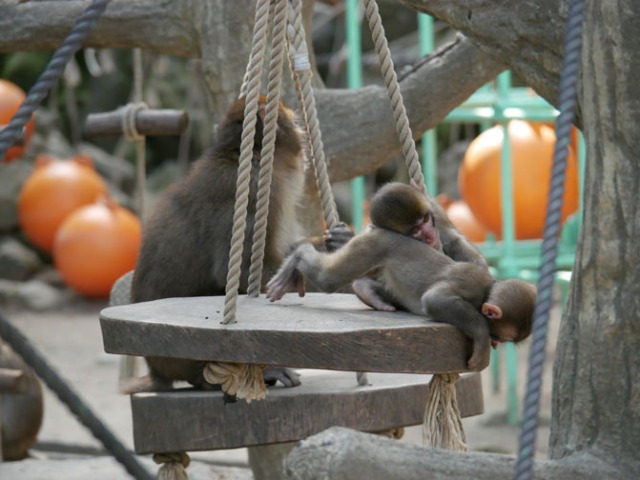 Just like mothers taking their children to the neighborhood park, the monkey moms turned their babies loose to play on the playground there. The monkey park has a playground for little monkeys. They dart around and zip from one place to another, stopping to play on the swing for awhile, then the slide, and maybe even spending a bit of time on the monkey bars, which they navigate much faster than human children in spite of being a lot smaller.

They also had some sort of ropes and rings along a rock wall that resembled something out of a ninja warrior competition except that even the baby monkeys are better at it than people competing on the show. Of course the monkeys could scramble right up the rock wall without the ropes and rings, even the mothers with a baby riding on their back.

These monkeys are quite used to people and pay no attention when someone gets right up next to them to take a monkey-and-me selfie. People aren’t supposed to touch them, but they do get very close and the monkeys don’t seem to mind. They also made no effort to steal anything from anyone like you hear about monkeys doing in some other places. One little baby monkey sat briefly on my foot and looked up at me like it was hoping to find its mother. I thought for a moment it might run right up my leg, but instead it took off before I had a chance to get my camera out. 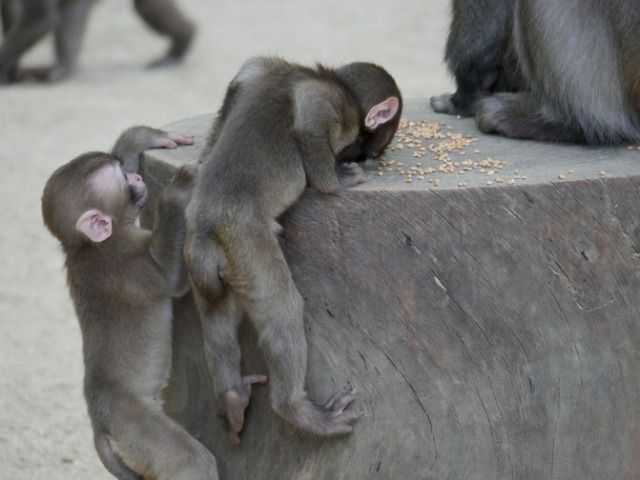 monkeys of all ages scramble for scattered wheat at feeding time

At feeding time the park worker scattered handfuls of wheat which the monkeys picked out of the dirt. They all seemed to know when that was about to happen as all of the ones hanging out in other areas headed right to the feeding grounds just before feeding time started. They are fed wheat frequently, about every half hour throughout the day. Twice daily they have a main feeding with sweet potatoes and other food. 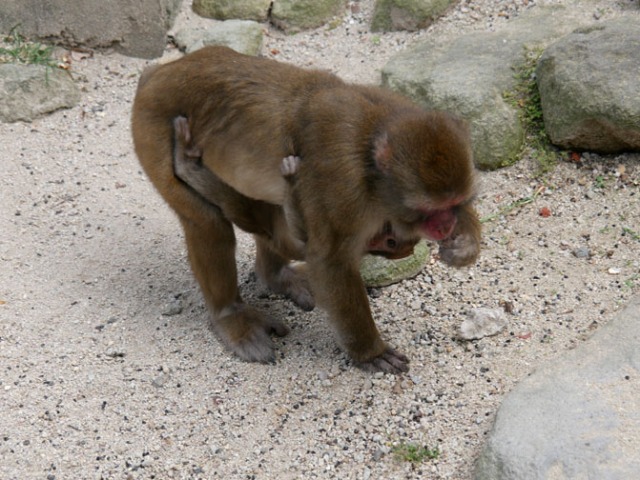 bellyrider in the feeding area

Most of the little babies ride on their mother’s back, though sometimes a mother runs by with the baby hanging under her belly instead. 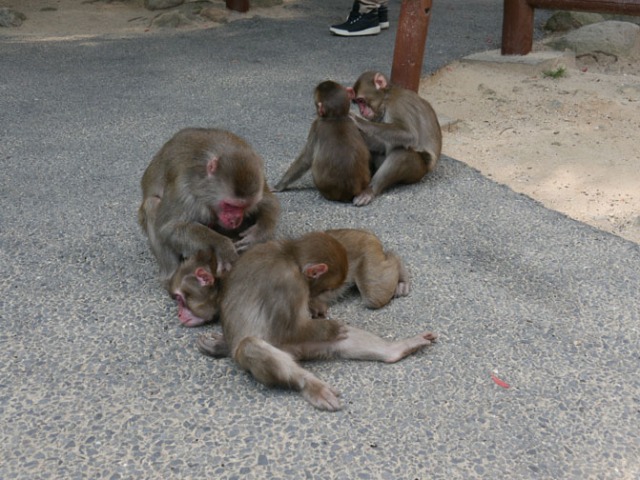 The monkeys constantly groomed each other or even themselves whenever they stopped anywhere. They run their fingers through their fur and sometimes pull something off the other monkey (or themselves) and put it in their mouth. It hardly seems like they would have a chance to get infested with anything considering the constant grooming, but since they do sometimes find something lice or fleas must somehow survive. 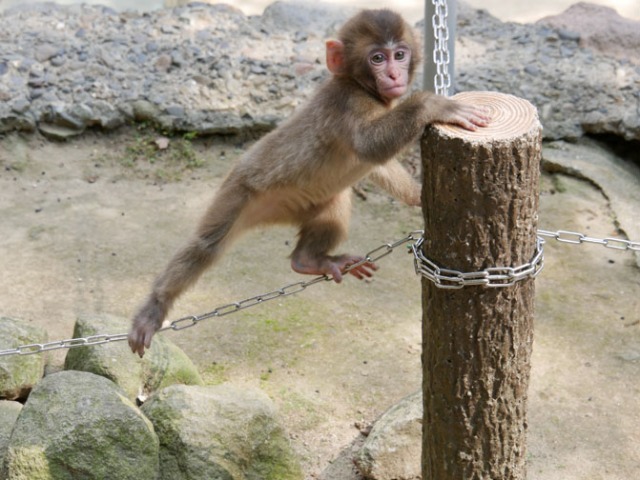 If you’re ever in Beppu, Japan hanging out with a band of tame wild monkeys is a fun thing to do. The monkey park is right across the street from Umitamago Aquarium so a combo visit to both places is an option and there are Marine Monkey tickets available at Beppu station, or you can pay separate entries at each attraction. The street between them is a very busy highway, but it has an overpass for people to walk across so there’s no need to cross the road. The aquarium has a taxi stand so it’s easy to find a ride back to the ship or elsewhere if there is something else you want to see. We had just gone to an aquarium in Osaka so we just walked over there to get the taxi since there is no taxi stand at the monkey park. We had it drop us off at the top one of the thermal pools called the 7 Hells (or Jigoku), and worked our way down the hill to see all the others on the way back to the ship.

The park is a ways from the port. I could not find the actual distance. The only site that mentioned distance at all just said several kilometers. It may be somewhere near 10K, but that is just a guess. There is a seaside trail running along Beppu Bay next to route 10, but it could be a long walk. The port provided a free shuttle bus from the cruise dock to JR Beppu Station. From there people can catch a bus or taxi if they want transportation to the park. Though the tracks run right past the park, the nearest train station is not nearby so taking a train is not recommended. We took the shuttle to the train station and a taxi from there to the park. Taxis are available at the port, but we were told the station was closer so took the shuttle to reduce taxi distance and therefore taxi price because taxis in Japan are expensive. The bus is of course far cheaper than a taxi, but not as convenient and requires adhering to their schedule rather than your own. There are more frequent bus options if you walk to the bus station instead of taking the shuttle to the train station, though it is still on their schedule rather than your own.

You can take any bus from Beppu that’s heading to Oita. The numbers are A60, A61 and A71. You can get more details from the travel information counter at Beppu station. They usually have at least one English-speaking person on duty. It takes about 15 minutes to get there by bus from Beppu station. Get off at the Takasakiyama stop.

WALKING: take the trail adjacent to Route 10 heading toward Oita until you reach the blue and yellow bridge. Umitamago Aquarium is on the sea side of the bridge and Takasakiyama Monkey Park on the mountain side.

baby monkey at the playground