The Seven Hells of Beppu

Posted on November 29, 2019 by LBcruiseshipblogger

Beppu, Japan, known as the city that steams, is home to numerous hot springs and other geothermal features. Steam rises from thermal pools, steam vents, and sometimes even storm drains. There are steam baths called Onsens (thermal spas) all throughout the city. Some of the thermal pools are far too hot to touch. These are known as the hells of Beppu or Jigoku in Japanese. Most of them sit very near each other high on a hill above the dock. The other 2 sit lower on the hill and down the coast a bit, roughly 3k away from the larger grouping.

Holland America Westerdam docked in Beppu with more than the average amount of port time, giving us a chance to see more than one thing. We started off with a visit to Takasakiyama Monkey Park. Afterword we took a taxi from there with a drop-off point at the highest of the hells on the hill – the farthest one from the port. We figured we’d start at the top and work our way downhill to the ship and see all the hells along the way. 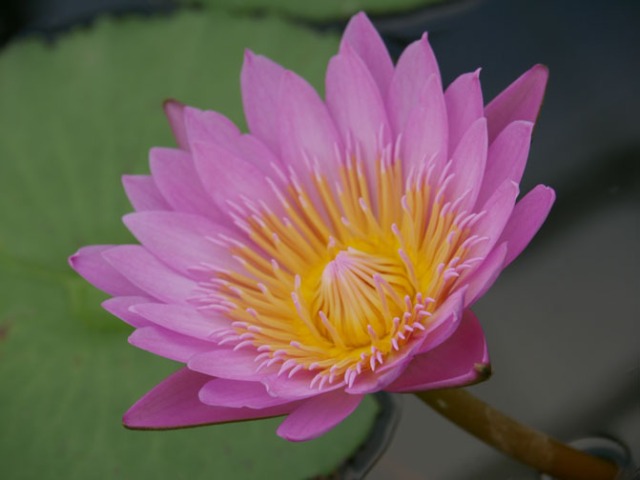 Both the monkey park and the hot springs have a fee to get in. The hot springs can be toured individually, or you can get a booklet of tickets to see 7 for the same price it would cost to see just 5 if you paid for them one by one at each place. We decided to get the 7-hotspring pass.

We started at Umi Jigoku. Although there are trails all around, none of them lead directly to the steaming blue pool, known as the sea hell because it has the aqua color of some tropical seas. You have to walk through the gift shop to get to the main pool. Most of the Jigokus or hells have something to see besides the main pool, giving someone who went to just the one something more to do than just look at one pool and leave.

Umi had several smaller hot pools, some of them red. It had a foot-soaking area in a much less hot pool with clear water. Most of the hells on the tour had small shrines or pagodas of some sort and this one was no exception. It also has gardens, a greenhouse, and a clear water pond with lotus flowers.

Oniishi Bouzu Jigoku is pretty much in the same complex as Umi, though it has a separate entrance and ticket to get in to the pool. This one is a series of bubbling mud pools. The name means shaven head hell because it spouts giant round mud bubbles that are said to resemble the shaved head of a monk. We were told the mud pools had a strong sulfur smell, but it really wasn’t bad at all, at least not on the day we were there. Like some of the other hells, it also had a foot-soaking area in a not so hot it burns you pool. 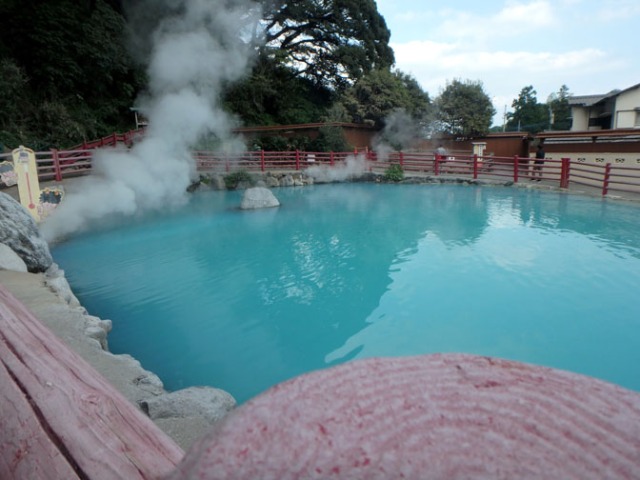 Kamodo Jigoku is another steamy blue pool. This one is known as the cooking pot hell. It has the hot spring kitchen, a food shack selling an assortment of foods cooked in nature’s steam.

They had foot-soaking pools near their tables and some vents where people who want to can inhale steam or steam their skin. The steam vents and soaking pools are free, but if you want to try hot spring cooked food you have to pay for it. This hell also had some steaming red lesser pools and a bubbly mud pond.

On the road between hells where we had to cross a street we passed by a couple food stalls that also had hot-spring steamed foods including eggs, corn, and sweet potatoes. Prices were slightly better than those at the hot spring.

Oniyama Jigoku had a very steamy pool and lots of small pens with crocodiles of various sizes.  The water in this pool was full of waves and quite rough in appearance compared to the others. A sign said their high pressure steam had the strength to pull one and a half train cars and its temperature made ideal conditions for crocodile breeding. 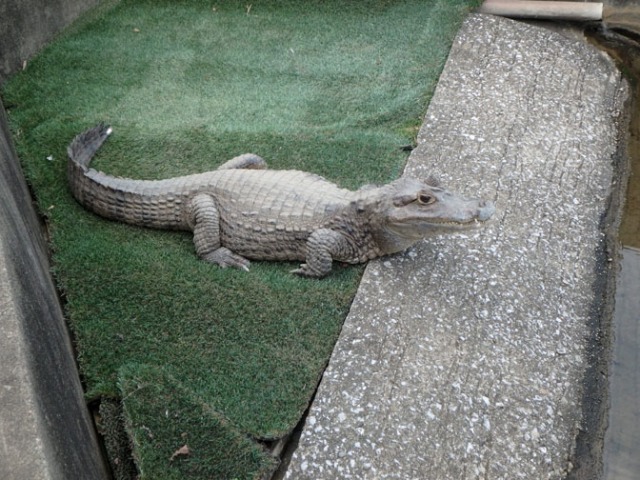 It did not say whether or not they eat any of those crocodiles or what they do with all the crocodiles they breed if they don’t. There’s a building with a stuffed (as in taxidermy, not toy) crocodile named Ichiro that was the first crocodile bred there and the biggest and longest lived of any they’ve had.

greetings near the entry at Kamodo Jigoku

There is a bit of signage between some of the hells, but you can find your way from one to another by just looking for the next giant steam plume. Some of them have their own hellish signs near the entry, but you’ve already found your way in by the time you see those.

Shiraike Jigoku is known as the white pool or white pond hell, though it looked more pale blue than white the day we saw it. They have a little aquarium that consists of a few tanks with different fish each in a small building near the pool. While they add a little something extra to see on a hot spring tour, if it is an aquarium you’re interested in Umitamago Aquarium out by Takasakiyama Monkey Park is the place to go.

It’s about 3k from there to the lower hells. A bus stop conveniently located nearby provides transportation for anyone who would rather not walk, but we went onward on foot. The bus station also had maps and people who could help direct anyone who wants to walk to the right road. Sidewalks aren’t necessarily their thing, with sometimes not much more than the grates over a drainage ditch providing somewhere to walk out of the road. One corner didn’t even have that, but did have a bit of a shoulder where brush had been mowed down to walk on when we crossed the road to get to it. Some parts of the walk had actual sidewalks, or at least a wide enough paved area that wasn’t part of the road to work as one. In one spot we found a viewpoint overlooking the steaming town. 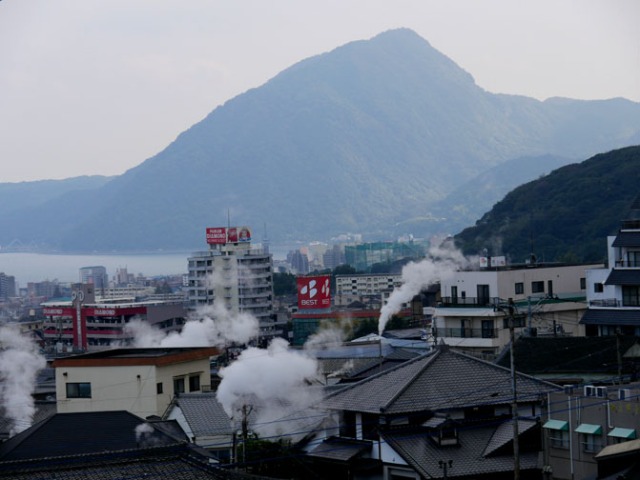 Most people opt for the bus and several busses did pass by us along the way . We came across one couple from the ship walking up the hill. They had started with the hell at the bottom and were working their way up. While the more direct road to the upper 5 hells comes up from the dock area, this one winds over and down to the point where it probably comes out a mile or two from the ship by the time you get back to the waterfront. We walked to the ship from there, but the map does show a nearby train station in the opposite direction from the ship, and the next one just a short walk away from the pier.

After going through a tunnel it’s not too much farther to Chinoike Jigoku, the red pool or blood pond hell. Direct translation is bloody hell pond. Iron oxide and other minerals give it the red color. It’s the oldest of the hells and ancient Buddhists believed the pool resembled a nightmarish underworld. Past uses of the pond are as garish as the name. This pool was previously used to torture people and boil them to death. Quite a difference from its current use. Besides being a tourist attraction, soothing skin products are now made from the mud of the pool.

fish live in a stream near the red pool of Chinoike

This one also has a foot bath, and a pathway up above one side of the pool for photos from a different angle. There’s a creek with fish and it has a large souvenir shop too. 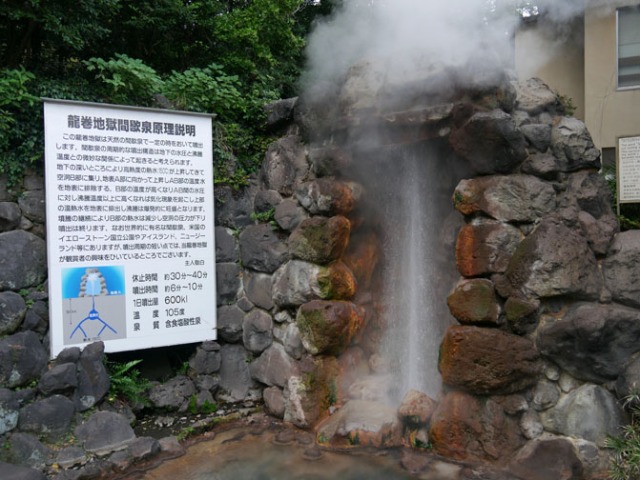 The last one we saw, Tatsumaki Jigoka would just be a small unimpressive pool except for the fact that it’s a geyser. It blows with regular frequency, somebody said about every 20 minutes. Mostly there people just gather on the benches or on what looks like a large stone stairway, but may really be intended for use as bleachers to wait for the geyser to erupt. At the top of that stairway there is a trail through a forested garden, but I didn’t have time to hike around or investigate it.

The geyser took awhile to get going, but once it did it kept it up for quite awhile. It erupts into a little cave made of stone, which the sign next to it says was built to keep it from going too high. Which made me wonder what someone was thinking when they built something to make their attraction less impressive. Apparently they wanted to put a building closer to the geyser than otherwise would have been safe. There’s a little sweet shop you walk through to get to the geyser, and the people there know when it is due for the next eruption.

Waking back to the ship, it’s a ways yet from the last hell to the railroad tracks that parallel the road running closest to the sea, and once you get there it’s still about 2 miles back to the ship. Our whole walk starting from the first hell down including walking around each of the hells was somewhere along the lines of 8k. I’d estimate walking the full loop rather than starting from the top would add another 5K when taking the more direct route from the port to the hells at the top of the hill.

These hot springs are one of the main attractions of Beppu and though they are all done up in touristy fashion rather than left in their natural state it’s still interesting to see them. It’s not necessary to walk there, taxis are available at the port and busses can get you there too. From JR Beppu Station take bus 5 ,7, or 9 and get off at Kannawa bus terminal for the hells at the top of the hill. Bus 16/16A goes from Kannawa to Shibaseki for the two lower hells and bus 26/26A returns from Shibaseki back to Kannawa. 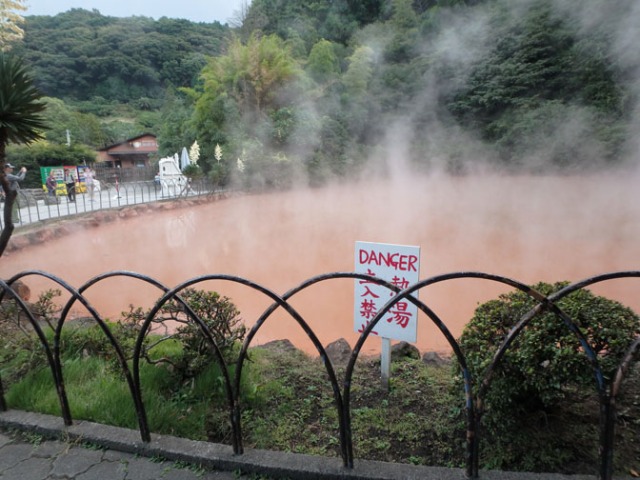 There is an 8th hell called Yama Jigoku which is not included on the 7-hells ticket, but is located in the same general area as the group of 5 of the hells that are included. This hell has orange and green waters with great plumes of steam, and a zoo with animals like monkeys, mini horses, peacocks, flamingos, and hippos. We just did the 7-hells tour and did not look for that one. Beppu was my favorite of the Japanese ports we visited because there was so much to do and we got a lot of exercise doing the 7 hells tour.

6 Responses to The Seven Hells of Beppu