Posted on November 22, 2019 by LBcruiseshipblogger

table ready for guests in a dining room on Royal Princess

Cruise ships have come a long way from the time people had to arrange for every gluten free item they might eat on a voyage in advance of the cruise. Now gluten free selections are often available to anyone at the buffet as well as in the dining room. Of course there are a lot of other dietary concerns besides gluten so it is still a good idea to make the cruise line aware of your needs before setting sail. Many have a section in the online registration where those needs can be indicated, but if your dietary restrictions are severe it’s a good idea to call and make sure your needs can be met before booking.

The first cruise I took with my sisters we booked anytime dining, but ended up going to the same waiter at the same time each night due to both of them needing to pre-order the night before so their dishes could be made gluten free. We learned on that one that anytime dining doesn’t really work for special diets. On our recent cruise on the Royal Princess we booked early dining from the start so we’d always have the same table and wait staff each night. I have some food issues now too with gluten and dairy limitations so this time it was all of us, though my problems are minor enough so far that when I’m not with the sisters I just choose my food carefully from the regular menu without preordering.

Royal Princess has several dining rooms. The one we were in had a little alcove with just a few tables in it that was walled off enough from the rest of the dining room to be a separate room, which is where our assigned table was. Only one other table in that room ever had anyone there so we had pretty quiet dinners. One side of the room was an exterior wall full of windows so even though our table wasn’t right next to the window we still had a nice view.

There’s usually something gluten free available on the standard menu at least on the first night. After that the waitstaff brings the next night’s menus to the table so your choices can be altered as necessary to fit your diet. This works fine for people with sensitivities to particular foods. If your restrictions are severe such as celiac disease or life-threatening peanut allergies, you would definitely want to make arrangements in advance of the cruise and meet with the maître d’ before dinner time on boarding day.

Some dietary concerns such as kosher meals may be pre-packaged and brought on board ready made since it is not just the food itself, but the circumstances of preparation that are of concern there. Cruise ship galleys do have separate areas to prepare different sorts of foods to avoid cross-contamination, but are not set up according to religious guidelines. If you ever take a galley tour you see a section of giant soup pots, a bakery, an area for vegetable prep, a place for meats, another separate area for fish, and of course a dessert section. There are also things like giant dishwashers and lots of dishes. 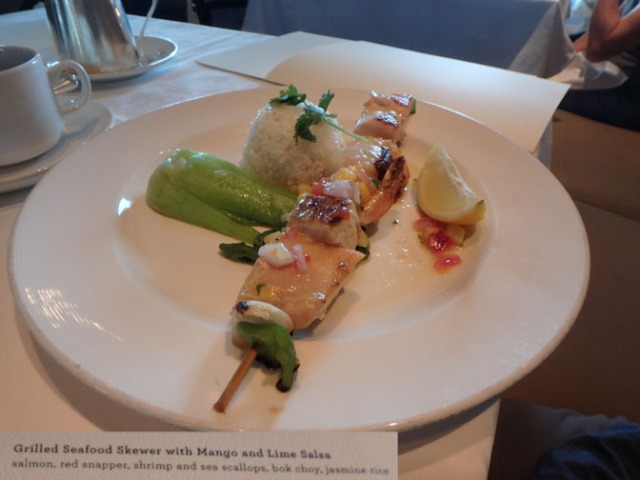 On the Royal Princess we generally had breakfast and lunch at the buffet, and dinner in the dining room. We could always find things on the buffet without gluten or dairy. There wasn’t a section specifically marked as gluten free, but when I asked at breakfast one day the person working that counter pointed out a different one where they had gluten free muffins available if you asked the counter person for them, and also would make gluten free toast or pancakes on request. None of it was sitting out ready to go and there was no signage so you had to know who to ask. We had breakfast in the dining room one day and they also had gluten free toast or pancakes for the asking, but not on the menu. 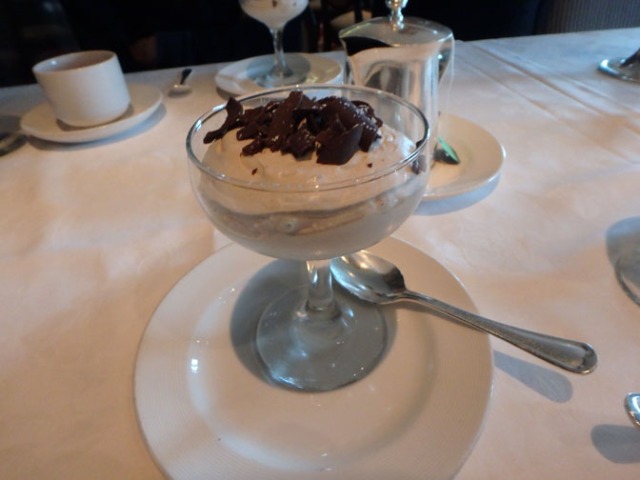 Dinners we could always find something among the selections offered for appetizer and main that either was gluten and dairy free or could be made so with a bit of alteration – which was the point of ordering the previous day, in case something needed to be changed. Desserts weren’t always so readily available, but when there was nothing suitable on the menu they always made up something special for us that wasn’t on the menu.

sometimes the regular desserts had a gluten free choice

Royal Princess also had a little café on the promenade deck that always had at least one gluten free dessert among their daily selections. Specialty coffee and tea cost extra at the café, but the food was free. 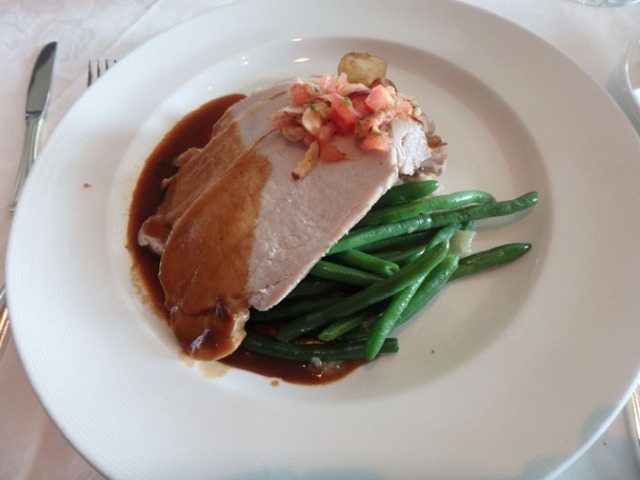 Overall cruises can cater to special diets, you just have to do your part in making them aware of your needs for the dining room or hunting down suitable items elsewhere. Gluten free is probably the easiest of special diets to manage while cruising since the cruise lines are making an effort to have those products readily available now, but they can adjust to other diets as well.

MyCruiseStories blog tells stories about adventures in cruising on ships big and small. Things to do onboard and in port. Anything connected to cruising. Also food, travel, recipes, towel animals, and the occasional random blog.
View all posts by LBcruiseshipblogger →
This entry was posted in Cruise Food, Princess, Royal Princess, Shipboard Life and tagged #cruisinggultenfree, cruise, cruise food, cruising gluten free, cruising on a special diet, photos, special diets, travel. Bookmark the permalink.