Posted on August 2, 2019 by LBcruiseshipblogger

Westerdam in Shimizu – photo taken from the giant wheel

The port of Shimizu is located between Tokyo and Osaka. With Mount Fuji looming large in the background, views from the port are spectacular on clear days. Fuji is a registered UNESCO World Heritage Site. A nearby pine tree grove called Miho-no-Matsubara is a World Heritage constituent property. People go there for views of the mountain as well as to see the trees. 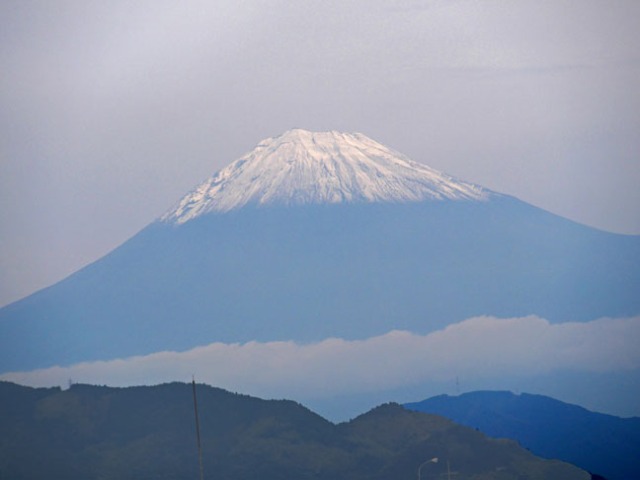 The main reason ships come to Shimizu is for the views of Mount Fuji, which is visible from the ship on clear days. On foggy days it may not be visible at all. We were there on a sort of in-between day when it was clear enough to see the mountain, but not clear enough for it to shine in all its spectacular glory.

There are several temples and shrines within a few miles of the port, one accessible by a ropeway tram. The area has a number of museums as well as some parks, a ferris wheel, small mall, a ferry, and a zoo.

We found a yellow temple and red shrine that were on the map we got at the port’s info booth as well as showing up on google maps, and a brown temple complex or shrine with multiple small buildings that was bigger than either of the others and not on either the paper or electronic map.

view of Shimizu from the ship

Shimizu is Japan’s number one tuna fishing port and fresh seafood is a favorite with tourists and locals alike. Besides tuna and other seafood local restaurants may serve sakura shrimp, a small crunchy variety found only in the area. Most local shops, restaurants, and attractions within walking distance of the cruise pier did not open before 10am during our visit. 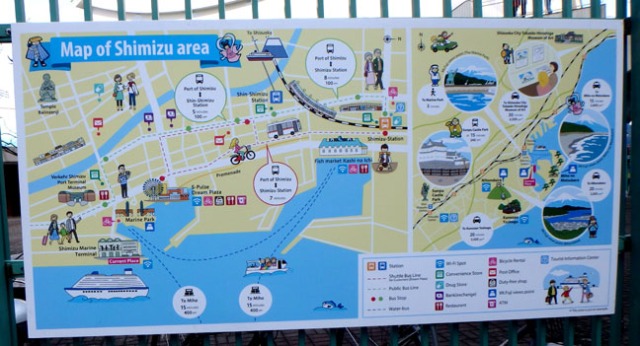 map hanging on the fence at the port

The ship docks right in town, but there is a free shuttle to a train station for those who want to venture farther from the port or go to other towns. There are also some local shrines near the train station. 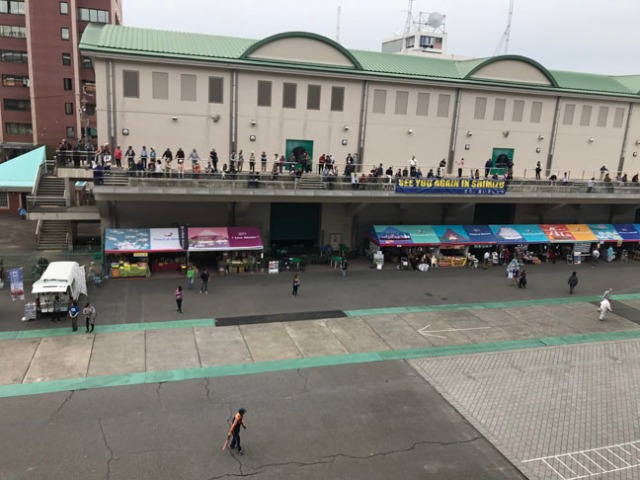 cruise terminal in Shimizu with outside booths

There were a number of little canvas booths at the port selling things, and an information booth where people venturing out on their own could get maps, directions, and information on nearby sights. The paper maps from the information booth are somewhat useful, as they did show temples, shrines, and other things of interest within easy walking distance of the port. They are not always perfectly clear though. The one we were given showed very few landmarks or road names to assist in finding the sites. The nearby shrines are much easier to find using google maps or a mapping app such as maps.me. There were cell phone sim cards available for rent at the port. We happened across a temple that was not shown on either the paper map or google maps before finding any that were.

a bit of the trail seen from the wheel

A paved walking and bike trail runs near the shoreline quite close to the dock. It leads to the pine grove for anyone who would like to take an 8k walk to that site, which would make it 16K round trip (10 miles). The trail is easily accessible from the ship and easy to find as you just walk to the ferris wheel which you can see from the ship and pick up the trail there. By the wheel the trail is a boardwalk along the sea, but further down it is inland a bit and paved. It’s a nice place for a walk even if you just want to go for a short distance and not all the way to the pine grove.

We saw several groups of small children out walking with their day care groups, with a few of the smallest ones riding in wagons. One little girl who couldn’t have been more than a year and a half old looked up from the wagon as we walked by and said hi in English, obviously pleased when we waved and said hi back. Kids in daycare groups often wore matching hats making them easier for caregivers to keep track of.

The seaside ferris wheel at this port sits next to a shopping plaza with lots of restaurants and food shops. Small rides for very small children surround the ferris wheel, and tickets for the wheel are available at the top of the stairs leading to the entrance of the ride.

city view from the wheel

Excursions offered from Holland America Westerdam included various bigger and more distant shrines than the ones near the port, an art museum and the pine grove, and a castle park. Most of the excursions included a stop at a viewpoint for Mount Fuji – with a weather permitting warning as it could be obscured if the day is cloudy.

performance on the dock

As the ship was preparing to leave kids from a local high school put on a Japanese drum performance on the dock, which drew crowds from both passengers on the ship and onlookers shoreside. 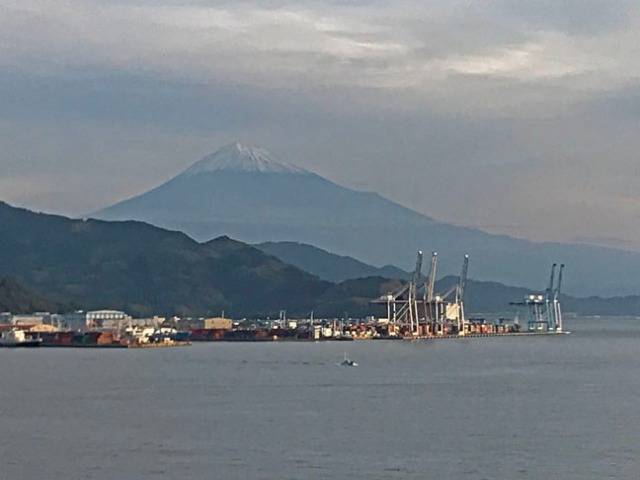 view of Mount Fuji from the ship