Posted on July 5, 2019 by LBcruiseshipblogger

view of the ship and port area from the ferris wheel

In a port stop at Yokohama, Japan’s Osanbashi Pier passengers don’t have far to go to find tourist attractions. In fact the pier itself is an attraction with trails and green space on top of the port buildings. From our ship, the Holland America Westerdam, we saw locals running by having their morning exercise on top of the pier.

The waterfront trails run beyond the pier to Yamashita Park, which is near to the Yokohama Marine Tower and Chinatown. The area is dotted with various little museums, including one in an old ship at the park and another in an old sailing ship near an amusement park in the Minato Mirai Shinko district area out the opposite direction from the pier. 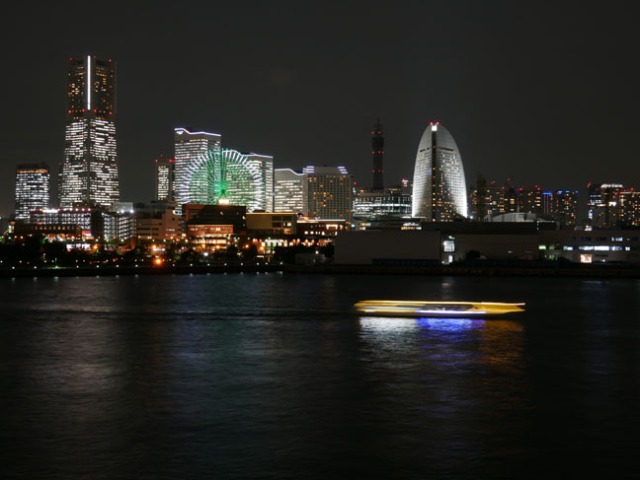 night view from the ship

The walking trail along the waterfront extends in either direction from the end of the pier. From the ship you can see a large ferris wheel and heading toward it takes you into the Minato Mirai Shinko district past the Yokohama Red Brick Warehouse and World Porters shops. Though only the ferris wheel is visible from the ship, once you get there the amusement park called Cosmoworld has many more rides and attractions. There are roller coasters and both indoor and outdoor arcades near the ferris wheel, and other rides and a children’s ride area across a bridge near the sailing ship museum. Just across the street from the ferris wheel sits the Cup Noodles museum. For anybody who swears the name of this product is Cup O’Noodles – the name I remember it by – it was called Cup O’Noodles in the USA until 1993. 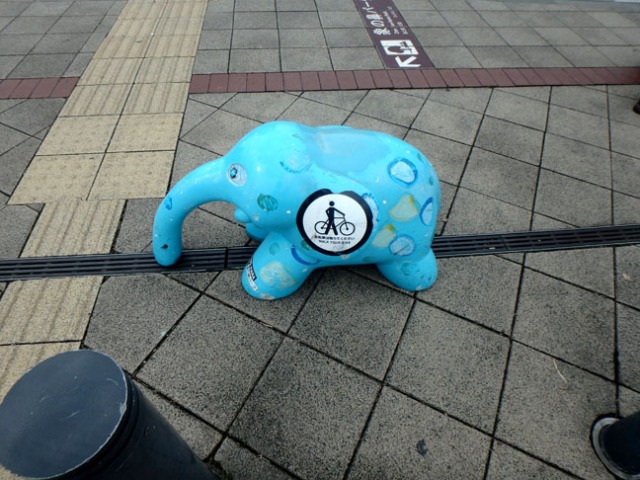 Funny little blue elephants dot the sidewalk by a seaside park. The yellow stripe with raised bumps and strips is for the blind to feel with their canes so they can find their way.

On the way to the Cup Noodle Museum and Cosmoworld we walked through a waterfront park area across the water from the ship. It had funny little elephant statues along the walkway and great views of the ship and the pier. Locals gathered there at lunchtime as well as passing through for their daily exercise running or walking their dogs. Like vehicles, dogs in Japan tended to be small. Our blue heeler is a medium sized dog at home, but would have seemed huge there. 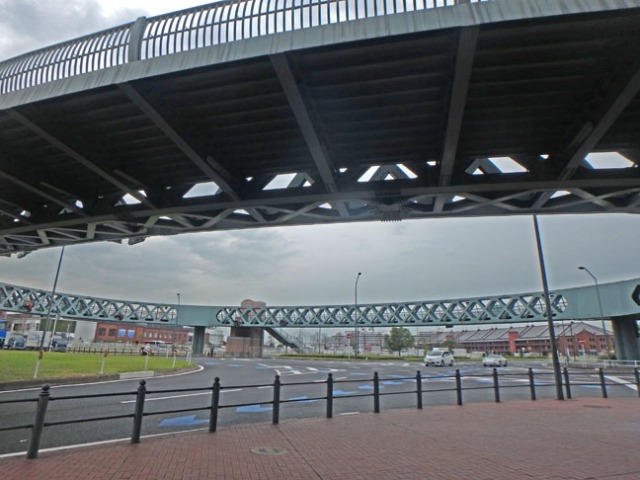 Farther along the way to the Ferris Wheel and Cup Noodles Museum we came to a busy road. They made crossing it easy with a circular walkway above the road where people could enter or leave at any corner. The raised walkway offered some great views of the surrounding area and a semi-distant bridge.

Like many things in Japan, Cosmoworld didn’t open until 10am so we went to the Cup Noodles Museum first since it opened earlier. Inside there are a variety of displays about instant ramen and cup noodles, all invented by one down-on-his-luck Japanese man named Momofuku Ando. Well down on his luck before his inventions anyway. His fortune turned around after that. 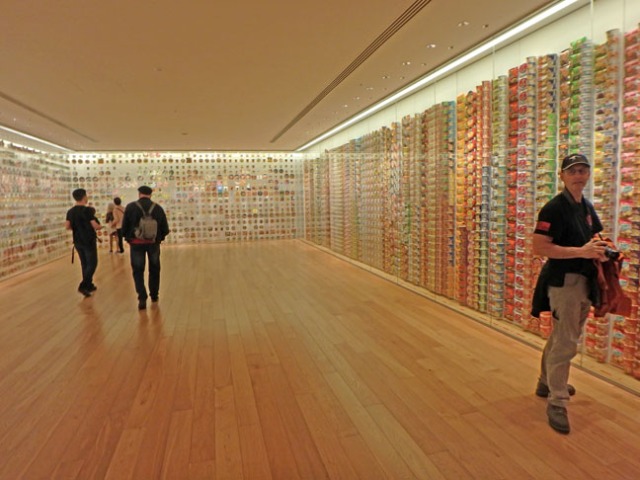 He first invented the instant sort of chicken ramen with its fried noodles and soup packet that most people are familiar with in 1958 when he was in his forties. Japanese people ate ramen noodles long before that, but they were not the instant type.

Later came cup noodles in 1971 when he was in his sixties. The biggest dilemma with these was how to get the cluster of noodles into the cup nice and straight with a bit of air space underneath. After trial and error they finally discovered putting the cup down onto the noodles worked better than trying to put the chunk of noodles into the cup. His final invention was Space Ram, which he invented in his nineties. This space-friendly version of ramen noodles was actually used and eaten by astronauts in space. 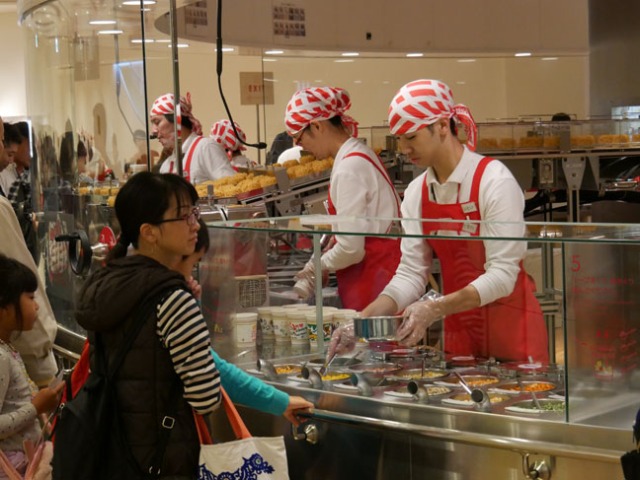 Besides displays on ramen and cup noodles the museum also has (for an extra charge) a make-it-yourself chicken ramen factory where kids make their own ramen noodles from scratch and a cupnoodles factory where people start with a cup they can design to their liking and then fill with noodles and their choice of soup and toppings. That cup can then be sealed to take home.

at the top of the ferris wheel

Prices at Cosmoworld amusement park are per ride. The giant ferris wheel moves continuously at a slow enough rate that people can get in and out of the gondolas without stopping the wheel. You just get once around, but it goes up quite high and the views are fantastic. From up there you can see all the other rides which include a flume ride surrounded by water and a diving coaster roller coaster that disappears into a hole in the ground surrounded by a fountain that sprays up as the coaster enters giving the appearance of it splashing into the water.

To ride either the ferris wheel or diving coaster you start by walking up a stairway – blue for the wheel and pink like the track for the coaster. At the coaster you leave any loose items like phones, cameras, purses, or backpacks in a locker before the ride starts and pick them up when it ends. It looks like a lot of pink track snaking through the amusement park, but the coaster travels pretty fast so it doesn’t take it long to get all the way around. When the coaster dives into the hole it travels a short distance underground surrounded by neon lights before resurfacing back above ground. At night the wheel lights up like a laser light show.

Red Brick Warehouse shops seem to be a common thing in Japan as we saw them in some other ports as well. This one had a lot of shops featuring fake food. While the fake food makes sense as display menus for restaurants like we saw in Hakodate, the things here appeared to be for personal use. They even had fake toast light switch plate covers with or without jelly. At least plastic jelly only looks sticky.

Besides the usual assortment of snacks unidentifiable to anyone who doesn’t read Japanese, we also saw some edibles that looked downright frightening. Even worse than the usual sort of gelatinous blobs of unknown substances in plastic wrap that are probably some sort of seafood, but possibly sweets. Although with these new treats it was more the name we shied away from than the actual appearance of the product.

on the pedestrian bridge

There is more to see or do in Yokohama within walking distance of the ship than there is time to see it all during the average cruise ship port stop, but for those who want to venture farther a shuttle is available to a nearby train station which can also be reached from a walking path. There are parks, gardens, a museum, and a zoo near the train station, and people can catch a train to Tokyo from there. 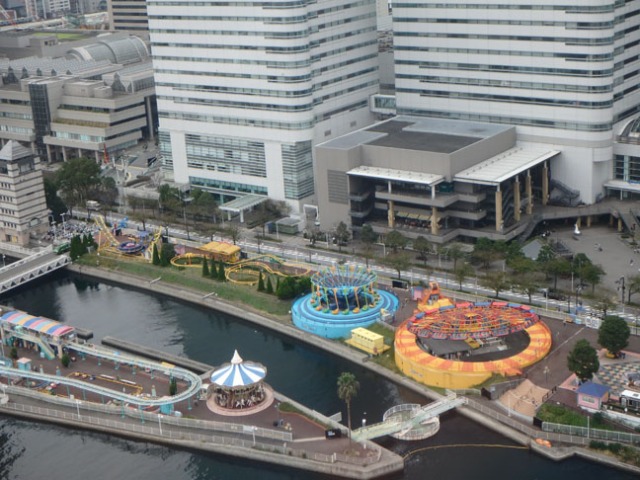 view of amusement park rides from the ferris wheel