Hits and Misses on Carnival Vista

Posted on August 9, 2019 by LBcruiseshipblogger 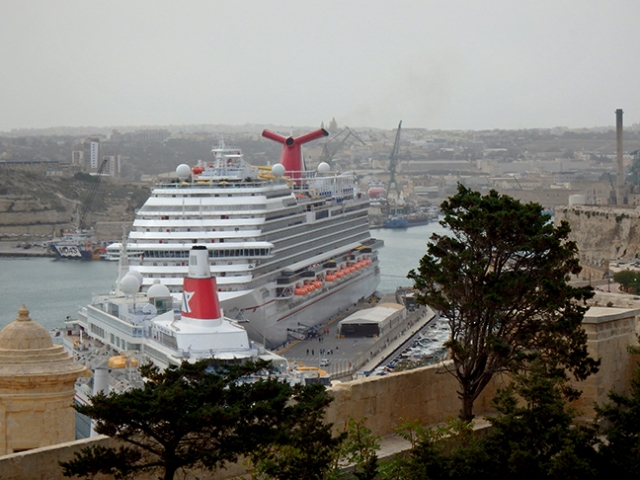 When Carnival’s ship called Vista first launched, it was not just a new ship, but the first ship of a whole new class – the Vista class of course. Vista is full of firsts. Some firsts for Carnival, some firsts at sea. Some invoke a wow, others more of a what were they thinking. Hits and misses in this blog are totally my opinion. Other people are free to feel differently. 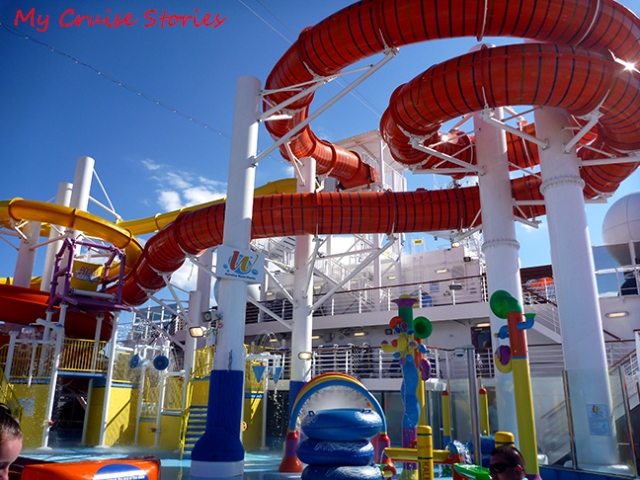 Waterslides and splash park. The orange one is the new tube slide.

Carnival Vista had its share of things to like, starting with the tube slide up on top of the ship. Carnival’s other ships all have waterslides, but this is the first one for Carnival where you slide down on tubes. 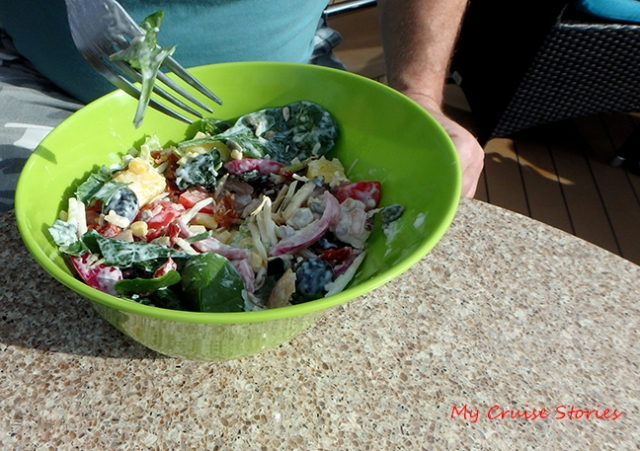 Carnival’s ships all have an adults only Serenity deck. While Serenity decks on other ships come equipped with a bar serving alcoholic beverages, Vista was the first with a salad bar. This salad bar is nothing like what you find at the serve yourself Lido buffet. It has giant salad bowls and all sorts of good things to choose from for the guy behind the counter to put in them. I say guy and not person because every time I went there it was always one or two guys working there. The bad thing about this salad bar is that it is only open at lunchtime on sea days. 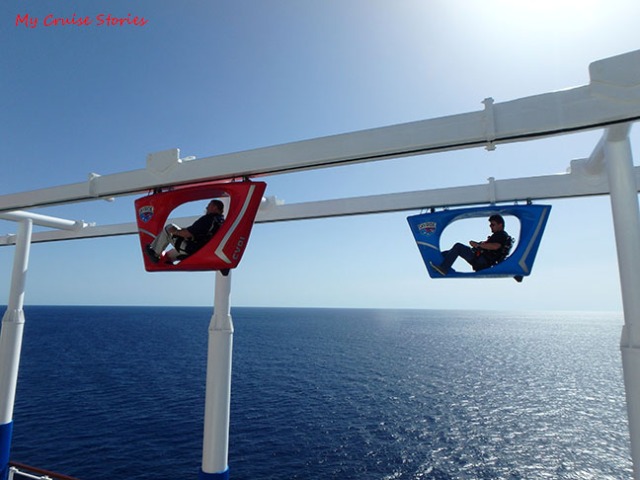 One of Vista’s firsts at sea is found in the outside area at the top of the ship above sports square in the form of a peddle it yourself skyride. Although I have a bum knee that prevents me from riding a bike, I had to give the skyride a try, knowing it could be difficult for me. The view from up there is excellent and even though it wasn’t a personal favorite (mostly due to the knee) I could see why other people enjoy it. I was a bit bummed they didn’t allow cameras, but the crew people working there said people had dropped them sometimes so they had to quit allowing them on the ride. The mini golf in sports square is always a hit too. 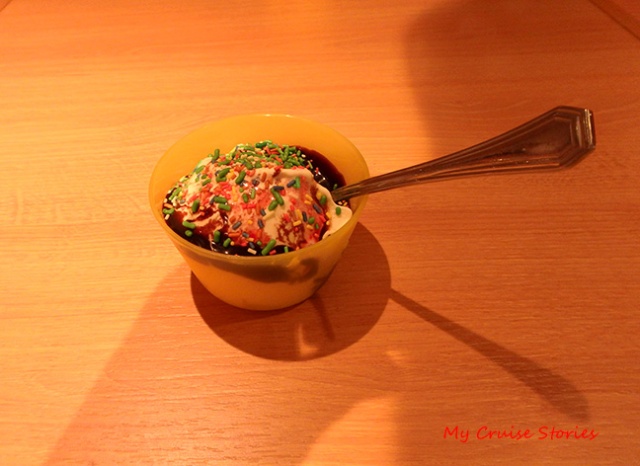 free homemade ice cream at lunchtime in the Lido buffet

Lunchtime in the Lido buffet brought about another first for Carnival – homemade ice cream, made while you wait. Waiting was the bad thing because the ice cream was such a hit they often ran out. There were sometimes more people in line than the amount of ice cream churned out could serve and it would be awhile before the next batch finished. For anyone lucky enough to get a bowl there was also a tray of sauces and toppings to dress it up with. They served 2 flavors each day which varied from day to day. Timing it right by getting there early or at less popular times made acquiring a bowl of ice cream easier. This ice cream is far superior to what comes out of their always available swirls machines. 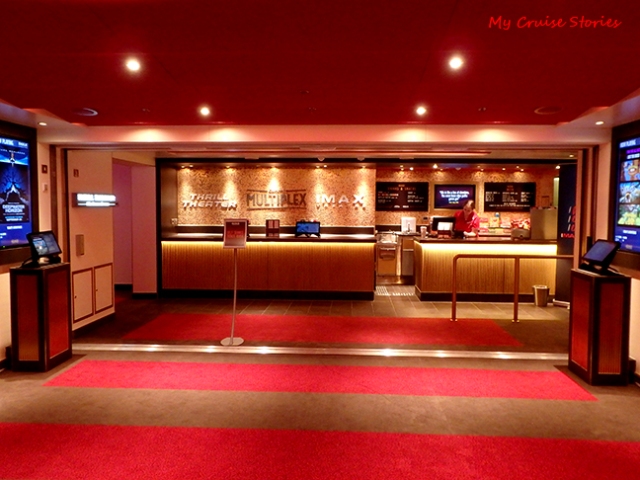 Inside the ship had new things as well. Their IMAX theater is the first at sea and there’s not a bad seat in the house. They had several IMAX movies and a couple full length features. These did cost extra and there wasn’t any special deals for going to more than one movie. 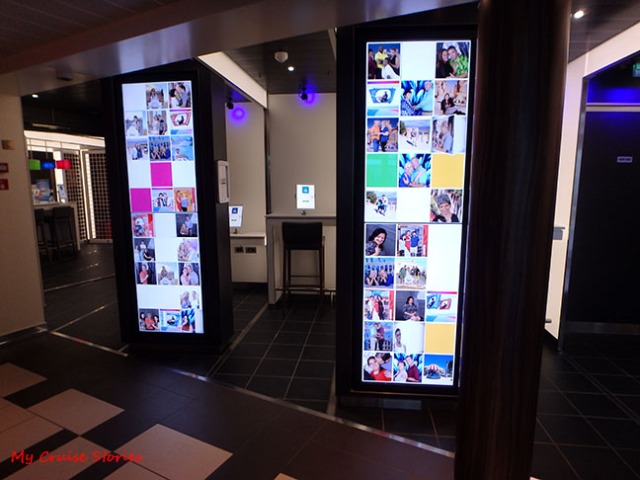 Instead of putting out actual photos that get thrown away at the end of the cruise if nobody buys them, Vista had a digital photo display. They also sold the photos digitally. They did not have a printed photo option for anyone who might want that though. 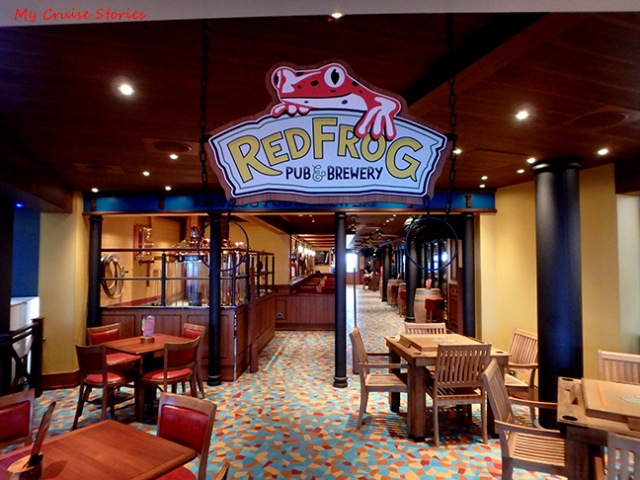 Vista’s Red Frog Pub has another first at sea – an actual brewery, brewing up special beers to serve onboard. 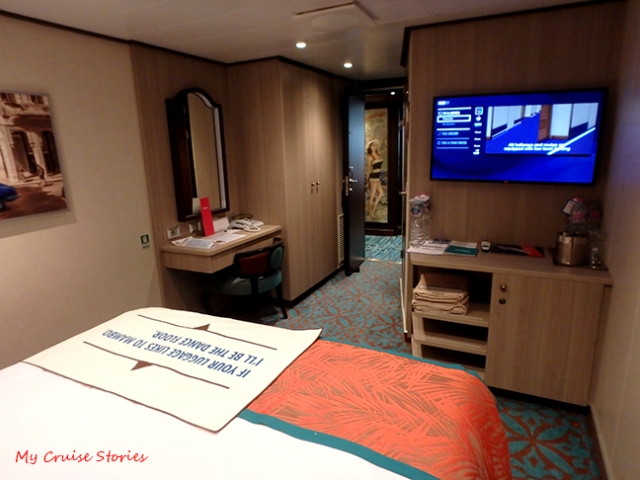 People might think Vista’s lack of closet space in the cabins is a miss, but the reason is because some of what would be closet space is taken up by individual heating and cooling units for each cabin. With individual control for your own room instead of a central system it’s a lot easier to keep it at just the temperature you want. 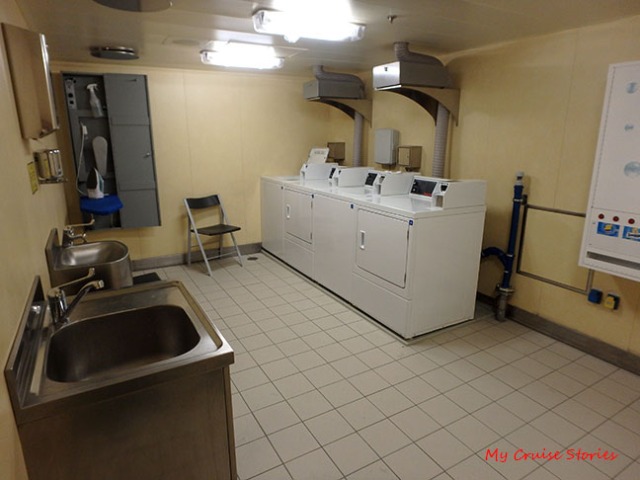 launderette on the Vista

Like all Carnival’s ships, the Vista has self-serve passenger laundries, which is always a hit with me. 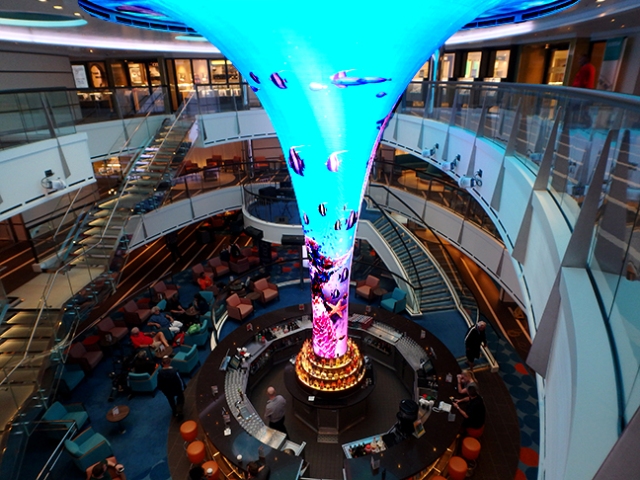 Because of the IMAX needing the space, Vista’s atrium was just 3 stories high. While this is nowhere near as impressive as the many decks high atriums of past ships, it did have a central pole with ever-changing designs. So depending on a person’s point of view the atrium could be either a hit or a miss.

Probably the biggest miss on the Vista is the main show theater, called the Liquid Lounge. In one of those what were they thinking moves, somebody had the not-so-brilliant idea of making the theater double as a night club. Which makes for a theater with barely a good seat anywhere in the house other than the very front row. We talked to somebody who went there when it was in night club mode who said it didn’t function very well as a nightclub either. Going to a show there did not mean seeing the show, mostly just hearing it while looking at the back of somebody else’s head. Even balcony seats were hard to see from. The front row had a blue plexiglass barrier obscuring the view. The rest of the rows looked at the backs of heads except in one small section where the seats actually were set high enough to see above the person in front of you – as long as you didn’t go too high in that section because the upper seats had a view of all the lighting equipment hanging from the ceiling. 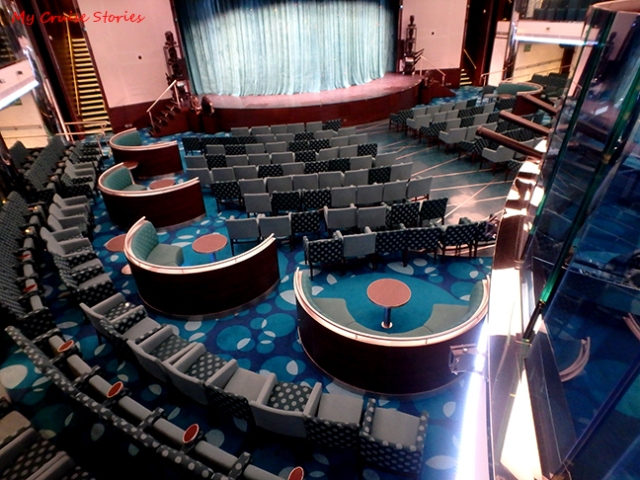 Liquid Lounge – the blue bit on the right side is the plexiglass barrier. Photo taken standing at the edge of the balcony with the camera beyond the plexiglass. The seats did not have this nice of a view.

Vista had the Thrill Theater like the Breeze has, which shows short films with moving seats and other effects. This ought to be in the hits category rather than the misses, but it was missing the all-cruise pass they had for the Thrill Theater on the Breeze that made it affordable to go as many times as you want and see all the different shows. On Vista they only had the per show price, which made it too expensive for most people to see more than one or two. This definitely showed in the audience. While the Thrill Theater on the Breeze was nearly always full, the one on Vista didn’t get much use. Sadly the crew person selling tickets said they were planning to discontinue the all-cruise pass on the Breeze as well. Kind of renders those theaters pointless if they make it too expensive for people to enjoy them. 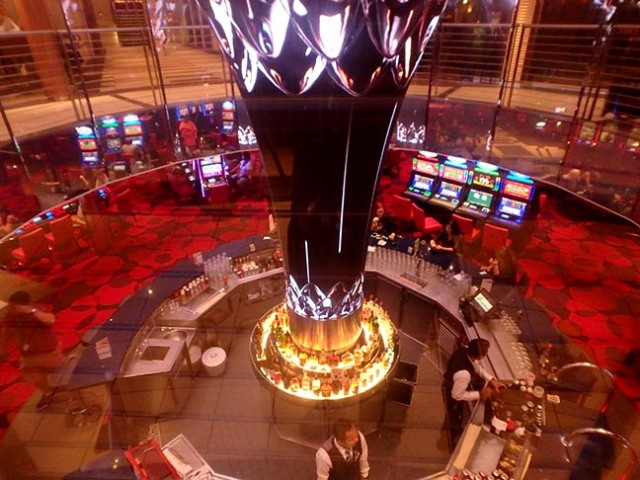 Like Carnival’s other ships (except the ones sailing in Australia), the casino on the Vista doubles as a smoking lounge. It is not fully enclosed so smoke escapes to other areas of the ship, and it sits in the middle of a public deck with no way around it other than going to another deck to avoid walking through the smoke. The casino has a video pole like the one in the atrium, which extends to the deck above. They at least had the sense to put plexiglass over the opening to keep the casino’s smoke off that deck. 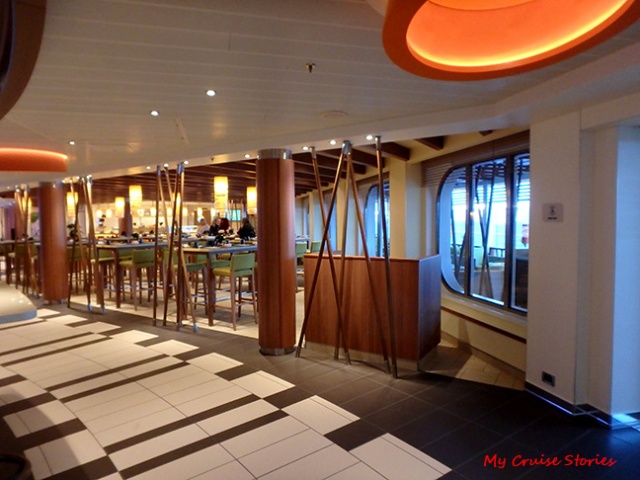 decor on the Vista is minimal

Some ships have wild décor, some way over the top décor, and some more subtle décor. Other than the video poles the Vista pretty much had no décor, especially through the main hallways in public areas of the ship. It also had somewhat of an awkward layout with access to important places like the front desk and shore excursion desk limited to only one of the ship’s three stairways/sets of elevators on a deck that did not go through to the other two stairways and elevator bays.

Another thing that seemed to me like a bad idea was making anyone below platinum in Carnival loyalty status with your time dining check in for dinner at a café halfway across the ship from the dining room. I’ve never seen that on any of their other ships. If I were a new cruiser and had to go through that every night to get to the dining room I might just eat at the Lido buffet and not bother. Which a lot of them may have done because the your time dining room was the emptiest we’ve ever seen with more unoccupied tables than occupied ones every night throughout our cruise. They also had no pedestals in the dining room so it seemed pretty pointless for the waiters to perform their dance routines when nobody other than whoever was right next to them could see anything. Kind of a theme with that ship, shows nobody can see. 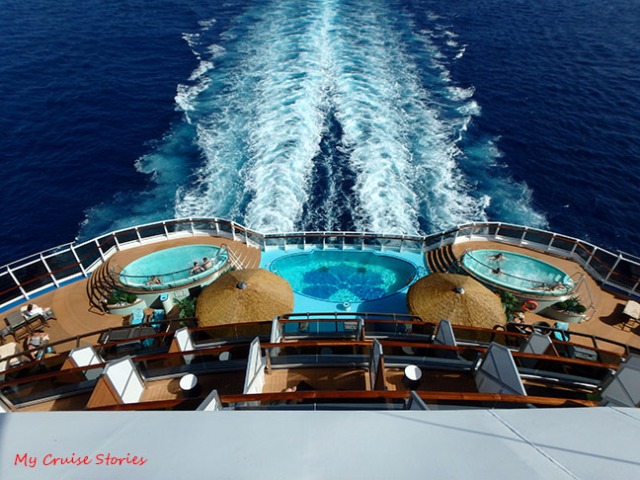 One thing we always liked about Carnival was that unlike some other lines that have exclusive areas available only to certain guests, Carnival’s public spaces were always available to anyone whether they booked the cheapest inside cabin or most expensive suite. Not on the Vista though. It has exclusive areas for people in both the Havana and Family Harbor cabins. The Family Harbor lounge is just in an inside area of a lower deck, but the Havana area includes a good portion of the outside area of the promenade deck. For the benefit of the few, the many who enjoy walking or jogging around the promenade deck get cut off halfway around. Our balcony looked down on the Havana cabanas and we rarely ever saw anyone out there or in their private section of the promenade deck next to the cabanas. 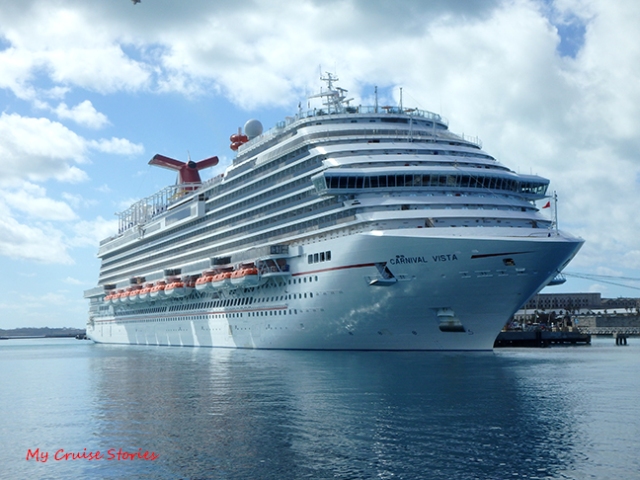 We used to sail Carnival more than any other line because they often have the best price and they have fun stuff like waterslides. On most ships the hits outweigh the misses, but on this one the misses were pretty overpowering. All else being equal, we would pick a Dream, Spirit, or Conquest class ship over Vista class if we sailed Carnival again. We mostly sail other lines now though because many of the other lines either keep the smoking outside in limited areas or keep it contained in a fully enclosed space.

MyCruiseStories blog tells stories about adventures in cruising on ships big and small. Things to do onboard and in port. Anything connected to cruising. Also food, travel, recipes, towel animals, and the occasional random blog.
View all posts by LBcruiseshipblogger →
This entry was posted in Carnival, Vista and tagged #carnivalvista, bad things about Vista, Carnival, cruise, cruise ship, firsts at sea, good things about Vista, new things in cruising, ship, travel, Vista. Bookmark the permalink.

18 Responses to Hits and Misses on Carnival Vista