Posted on July 26, 2019 by LBcruiseshipblogger 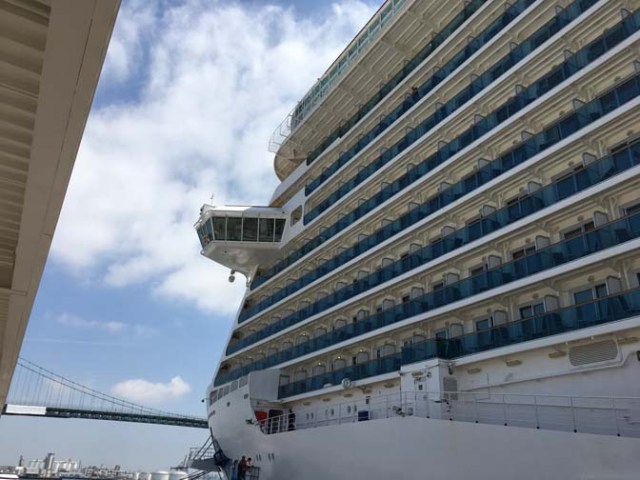 Princess did a couple things prior to our cruise that made me think if there are other lines offering the itinerary I want I’d sail with somebody else next time. We booked this cruise over a year in advance and it showed a boarding time of 1pm all along. Suddenly a couple weeks before the cruise, when pretty much everyone will have already made their travel arrangements, they sent out an email saying they have staggered boarding times by deck.

Royal Princess Piazza is a hub of activity during the cruise

Normally higher decks are given priority in everything with any cruise line because the higher you go generally the more the rooms cost. Of course the one time we’re near the top, this one starts at the bottom and goes up, so according to their staggered boarding schedule we’re last on the boat at 2:30, giving us only a half hour window between our assigned boarding time and the 3:00 all-aboard time. Which of course means no time to do much of anything but get on the boat and go to the muster drill. Not to mention the possibility of ending up hanging around the port for hours on end before getting let in because we had already booked flights that would get us into LAX early enough to get to the port before 1pm even if the flight had a bit of a delay and the traffic from there to the port in San Pedro was horrible – which traffic in Los Angeles is definitely known for.

Of course anyone flying in the night before would also want to board as early as they could since check-out time in hotels is generally 11am so we were not likely the only people upset by this sudden announcement of assigned staggered boarding times on a ship where boarding was already scheduled to start later than usual.

When we sailed on Carnival Legend out of Sydney Australia they had staggered boarding times, but instead of springing an unwanted time on people just before the cruise they had the times listed as part of the online registration process that people complete before sailing. So there at least people got their choice of boarding times, especially if they registered early before all the good ones were gone. Even those who registered late and had to wait for a later time to get on knew that in advance. A much better solution and one that leads to a lot more happy passengers rather than angering or upsetting people unnecessarily just before their cruise. Some ports are short on waiting space and staggered boarding times are implemented in an attempt to reduce overcrowding. In Sydney they did not let people into the port building before their scheduled boarding time.

Royal Princess at the dock in LA

Not that trying to keep people away from the port is likely to work when the first available time listing of 1pm is already quite late. Many people not local to the area are likely to already be there long before that since most have nowhere else to go. So rather than keeping people away until later in the day, odds are the result of those assigned times is a whole bunch of unhappy people on a day they should be excited about starting a long anticipated vacation.

This Princess cruise had just a 2 hour scheduled boarding window. They were apparently hoping the majority of passengers use their ocean medallion app to sign in online ahead of time and bypass the lines at the pier. Which sounds good until you see the part about scanning your passport with your phone and sending it to them, thusly putting that info online for identity thieves to find. Something we were not comfortable doing so we just waited to check in at the pier the old fashioned way. The ocean medallion is something Princess is implementing on some of their ships. You have a medallion instead of a keycard. It performs all the functions of a keycard and a lot more. Besides unlocking your cabin door and payment of any onboard purchases, it can also interact with screens near the elevators to do things like find your way around the ship, search for your shipmates (which is both useful and creepy), or play games on those same screens. It’s also waterproof, which would definitely be a bonus on an itinerary with beaches or snorkeling.

3 sisters on formal night on the Royal Princess

The other thing that also happened about 2 weeks before sailing was finding a refund notice from PayPal for a shore excursion I had booked for the 3 of us as a Christmas gift to my sisters. No word from Princess about that at all. The excursion’s absence from our online account indicated that it had indeed been canceled, but it certainly would have been nice if Princess had sent at the very least an auto-generated email with an explanation of the cancellation. I called to ask about it and the person there said that sort of thing happens frequently with them as they list all excursions the port has to offer whether they are actually available on that particular sailing or not. Which if true does not seem like a good business practice to me because making people unhappy just before they get on the ship is not a good way to get repeat business. If it’s not actually true then there’s at least one customer service representative who needs some training in how not to make the company look stupid. She did say you could tell which excursions were real because they would list a start time for the event, but since ours did give a start time that is apparently no guarantee the excursion will actually happen. By that time I felt that Princess was going to have to seriously redeem themselves on the voyage to avoid becoming my last choice of lines for any future cruises. They did eventually send my sisters notice of the tour cancellation, but never did send me anything so I wondered if the notification was only sent to them because when I called I mentioned they should routinely notify people if they cancel a booked excursion when the representative said they generally did not. 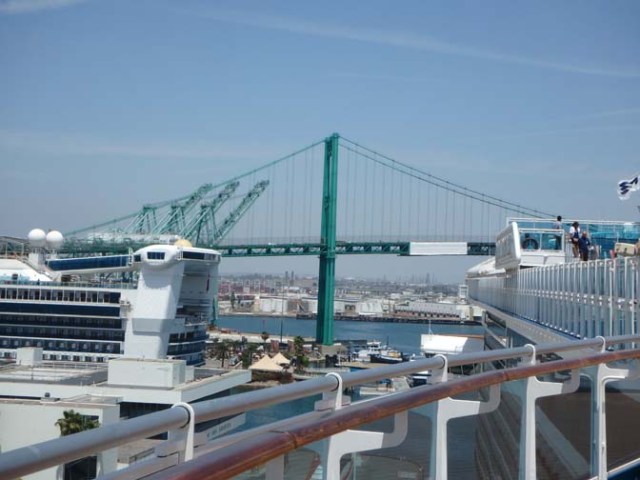 I flew to California with one of my sisters. The other sister came from a different state on a slightly earlier flight so she was waiting for us in baggage claim when we got there. Our plane landed on time and we got an Uber within minutes of ordering one after we picked up our luggage. We didn’t hit any traffic snarls at all between the airport and the cruise dock. After all that stressing us out pre-cruise and hoping at the very least we could check in our luggage and find something to do until boarding time, we got to the port around 10:30am. There were already porters outside collecting luggage. We got that taken care of right away and then were able to go straight into the port building. They had separate lines for ocean ready or not. The line was quite short for the not. We checked in easily and were given a card with boarding group number 5. They went by first come first served. Nobody said a word about the dreaded assigned staggered boarding time. We didn’t wait for long before they started calling elite, premium, and platinum groups, which they went through fairly quickly before getting to plain old number 1, followed in quick succession by 2,3,4, and then 5. We were on the ship by 11:30, well before the original 1 pm boarding time and long before the 2;30 time we were scheduled for at the last minute so they stressed us out for the last two weeks pre-cruise and made us question ever booking with Princess again for nothing.

view of LA from the ship

I don’t know how quickly the ocean ready crowd got on, but the hype was that they’d pass straight through once boarding began. I’m sure it sped up the process considerably for the rest of us just by not having all those people in the same check-in line.

city view from the walkway between the terminal and the ship

Once our number was called we went to the ship. To get there we left the port building and walked down a long covered outside walkway to get to the gangway. Mostly the view from the walkway was buildings on one side and the ship on the other, but here and there we had a peek-a-boo view of the city. 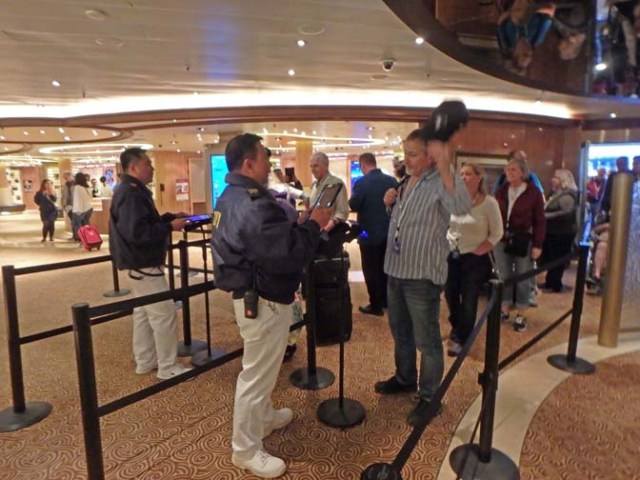 There was a bit of a line to scan in as people boarded, and they took our ship ID photos there since they had not taken them at check in. They had about 5 stations to process people so the line went quite quickly, especially since anyone ocean ready had already sent their photo for ship ID and didn’t have to stop for one there. 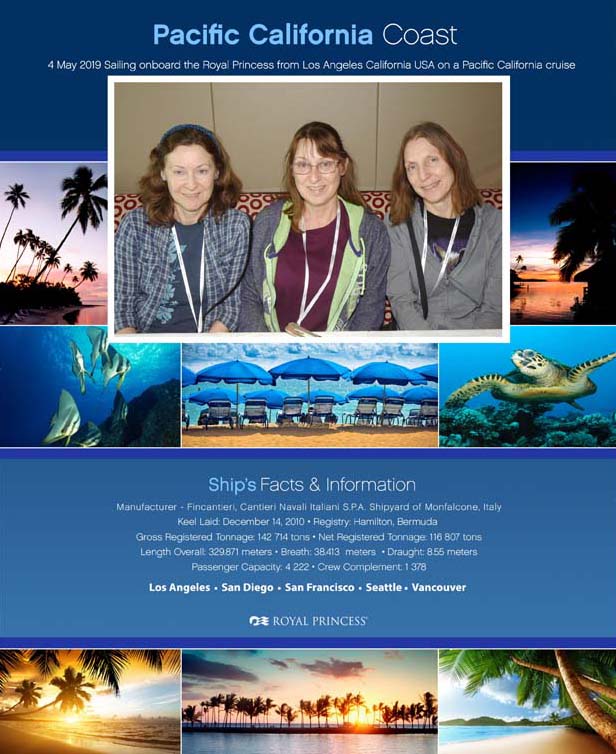 The email about the staggered boarding times did warn that the room wouldn’t be ready before the assigned time, but the steward let us drop off our backpacks which was really the only thing we needed the room for at that time anyway. 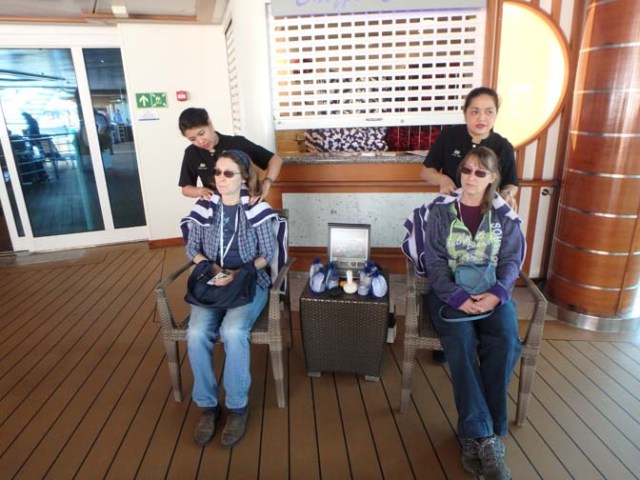 my sisters having a sample massage at the spa tour

Having gotten on the ship so early we had plenty of time to go to the lunch buffet, take the spa tour (and sign up for the thermal suite), and explore the ship a bit before the muster drill. A much better way to spend the day than the dreaded sitting around the waiting area, or worse yet hanging around outside waiting for our assigned time to even get let in the door as is the case sometimes with staggered boarding. Perhaps that is chalked up to the ocean medallions and all the ocean ready people registering pre-cruise making the boarding process quick and easy. Of course if that is the case Princess should know that and not send out unnecessary upsetting emails to people booked on ocean medallion ships.

Golden Princess sailing out of LA

view from our cabin balcony in the LA cruise port

We had a great cruise and Princess did redeem themselves both onboard and with the smooth and easy boarding process that was so much quicker than their pre-cruise email indicated it would be. It would have been nice to have spent those last two pre-cruise weeks with joyful anticipation of an upcoming cruise instead of worrying over not being able to get on the ship until practically time to set sail though.

MyCruiseStories blog tells stories about adventures in cruising on ships big and small. Things to do onboard and in port. Anything connected to cruising. Also food, travel, recipes, towel animals, and the occasional random blog.
View all posts by LBcruiseshipblogger →
This entry was posted in Port Cities, Princess, Royal Princess, USA and tagged boarding, boarding in LA, cruise, photos, Princess, Royal Princess, travel. Bookmark the permalink.

9 Responses to Boarding the Royal Princess