Hits and Misses on Carnival Magic

Posted on May 17, 2019 by LBcruiseshipblogger

Hits and misses are the things I liked and didn’t like about the ship. It doesn’t mean everyone who ever sails on it agrees, it’s just my opinion. We really liked Carnival Magic. The décor of the ship gives off a vibe of fun from the moment you step onboard. True to its name, the décor has magic in its theme. The atrium area is mainly decorated with lights, which constantly change colors. Some of the pictures hanging about the ship depict magical scenes, and in some places even the walls sparkle.

During our voyage the ship had a great crew, friendly and helpful in all areas of the ship. One of our favorites was the tableside magician in the dining room who entertained the grandkids with different tricks every night. They don’t always go to the same table every day, but the kids liked him so much he made a point of coming to ours.

We took this cruise with a large family group, 3 cabins between us all. It started out with my husband and I and our daughter and her two kids so we all booked a 5-person cabin, which we were quite happy to find on this ship as not all ships have them. The Magic’s 5-person cabins are all deluxe ocean view. They have the usual two beds that can either be twins or put together for one bed, two drop down bunks, and a couch that can be a bed. There is a curtain that can divide the room with 2 beds on one side of the curtain and 3 on the other if people want a little separation at night.

The room also has an extra partial bathroom with a sink and tub. With 5 people in a cabin this is a great feature. Most of the ocean view rooms on the ship are the deluxe ones. Just a small number of them hold 5 people. Others hold anywhere from 2-4 depending on the cabin. While that extra bathroom is a great feature when you have extra people in the room and definitely belongs in the hits for 4 or 5 person rooms, since more cabins have 2 people in them than any other amount it seems like there ought to be a larger percentage of the regular ocean view cabins. When sailing with just 2 people having the space taken up by the second bathroom as extra floorspace in the main cabin area as well as the lower price of not being a deluxe room is preferable so I would put having considerably more deluxe than regular ocean view rooms in the miss category.

The younger kids loved Camp Ocean. Other hits for this trip included the water slides and dive-in movies on the Lido deck in the evenings. Some of our group had a spa cabin which comes with use of the thermal suite so that was definitely a hit for them.

The biggest miss on the Magic is the same on any Carnival ship and that is the smoky casino. The Magic’s casino sits in the center of a public deck with other public spaces on both ends of that deck and no way to get from one end to the other without either going outside, to another deck, or gagging your way through the smoke-filled casino. The casino is not fully enclosed which also means smoke escapes into other areas on both ends including a stairway. Smoking there is not limited to active players so it gets a lot of use just as a smoking lounge, which greatly increases the amount of smoke permeating other public areas of the ship. Carnival used to be our go-to line, but we rarely sail with them anymore due to their smoking policy as many other lines are now smoke-free inside. 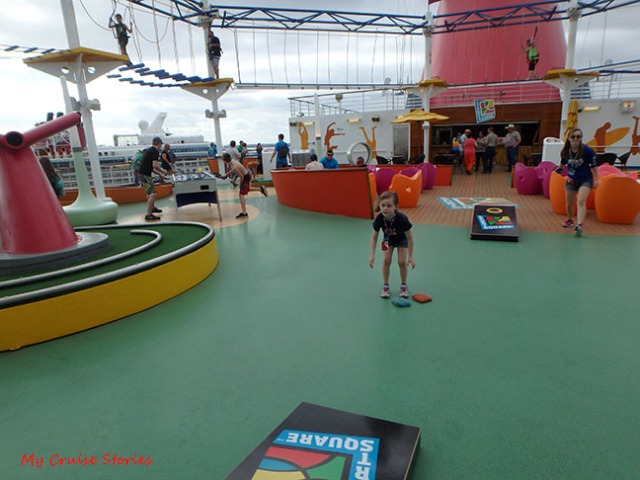 Also a miss is promoting the ropes course as fun for all. What they really mean is fun for those who are at least as tall as their 48 inch minimum height limit, but there is no mention of it having a height limit until you get on board unless you happen to find it buried several clicks deep in the website’s obscure FAQ section – something I only know exists because of a comment by a facebook troll in reply to my daughter’s post about her daughter’s sad experience. We had a very disappointed little girl who has done ropes courses in other places and greatly looked forward to the one on the ship. She left the sky course area in tears after finding out she couldn’t use it so it was definitely not fun for her.

Carnival has a fairly new HUB app that should be a hit, but so far has been a miss – for us anyway. The free part of this app has the Fun Times daily newsletter which is also delivered as a paper copy to each stateroom. This lists all the daily activities for the ship. For $5 per person you can also add messaging. This would be a great way to keep in contact with the people you are sailing with if it worked. Therein lies the problem – it rarely ever works. Out of the 9 people we sailed with some phones worked better than others. On the worst one not even the free part worked and messages were almost never delivered or received. Even the best of them didn’t always send or receive messages, and some messages did not go through until hours later or even the next day. This was the third cruise where we tried this app and it did not fully work on any of them, though it did work somewhat better on other ships. Great concept though if they work the bugs out of the system so it actually does what it is supposed to.

Disembarkation was a miss on this ship mainly due to crew people standing at an elevator letting everyone getting off the elevator cut into a long line of people who had waited for ages to get to that point. Before the crew people came new arrivals proceeded to the end of the line in an orderly fashion so that miss is totally on the two crew members messing up the line.

Overall we liked the Magic and had an enjoyable cruise. We also learned by accident due to the amount of luggage my daughter had that using a porter speeds you through the customs line. With a porter you bypass the regular line and go straight to the booth reserved for wheelchairs and porters. There was not much of a line there, while the regular one snaked through dividers for quite a distance and was packed with people. Port Canaveral is not the most efficient port. They had about twice as many customs agents for the fairly short non-Americans line as they did for the extremely long Americans only line so we were quite happy to bypass it as it moved very slowly. Of course Carnival has no control over the port authorities so that is a miss on the port itself, not the cruise line.

MyCruiseStories blog tells stories about adventures in cruising on ships big and small. Things to do onboard and in port. Anything connected to cruising. Also food, travel, recipes, towel animals, and the occasional random blog.
View all posts by LBcruiseshipblogger →
This entry was posted in Carnival, Magic and tagged #carnivalmagic, bad things, Carnival, cruise ship, good things, Magic. Bookmark the permalink.

3 Responses to Hits and Misses on Carnival Magic