Posted on March 2, 2018 by LBcruiseshipblogger

Down on deck 1, Carnival Magic has a short row of Deluxe Ocean View cabins near the stern on both sides of the ship that each hold 5 people in one room. Other than suites and a few odd shaped or accessible cabins, Ocean View cabins are often the biggest staterooms on a cruise ship. Many of them occupy the same space as a balcony cabin, except that the space taken up by a balcony becomes indoor space.

The Magic’s 5-person cabins have 2 bunk beds in line rather than across the room from each other. Also two regular twin beds plus a couch that makes into a bed. When the room is set up for five one side has all the bunks and the other one lone bed. That was my bed. The grandkids wanted the bunks so this was my first cruise in a cabin with bunks where I wasn’t the one in the bunk. I like bunks so I don’t mind sleeping there. Bunks are just as comfortable as the regular beds. It’s Carnival’s couch beds that are not so comfortable.

towel curtain around the lower bunk

There’s a curtain between the bunks which can be pulled across for more privacy at night or when changing. This just divides the area between the 3 beds on the window end and the other bunk over the couch bed. For more privacy or to block out some light those on the lower bunks can make a curtain around their bed by tucking beach towels under the edge of the mattress of the bed above so they hang down around the lower bed. My daughter did that around the couch-bed, which is where she slept. Being the youngest of the adults she took the least comfortable bed to spare our old backs. Or maybe we picked first and she got stuck with it. I can’t remember which. 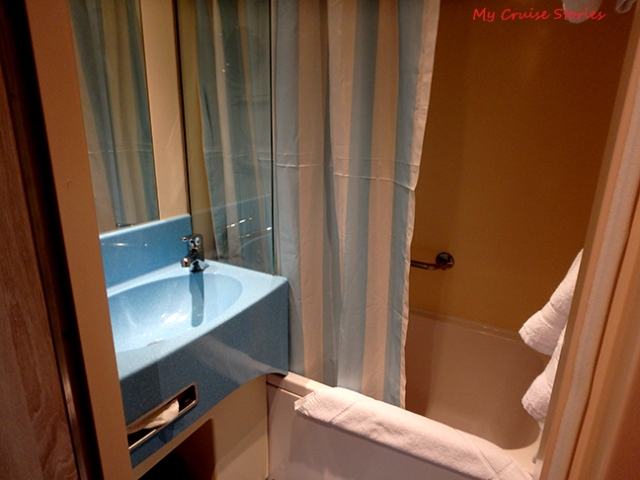 extra bathroom with sink and tub – and another clothes line

Carnival’s deluxe ocean view rooms have 2 bathrooms. One is a regular cruise ship bathroom with sink, toilet, and shower. The other has a sink and a short, but deep tub that also has a shower. It also has a clothesline, which is a big help because the one in the other bathroom would not hold swimming suits for 5 people. When you have 5 people in a room this extra bathroom is a great feature. Also helpful with 4 and maybe even 3, but all the deluxe ocean view rooms have the extra partial bathroom, even the ones designated for just two guests. 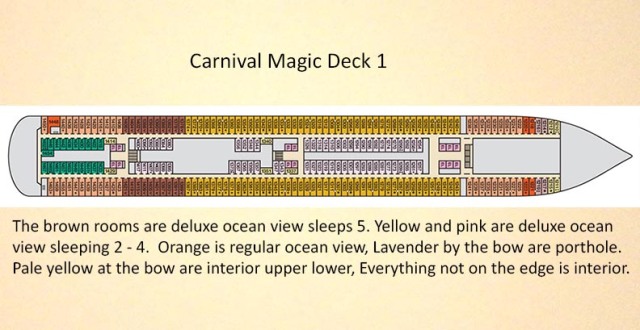 There are very few ocean view rooms on the Magic that aren’t deluxe. With just 2 people I’d prefer the extra floorspace and lower price that would come with a regular ocean view room, and since a view with a price lower than balcony rooms is probably the main reason most people book ocean view it seems like they should have more regular and less deluxe ocean view cabins on this and similar ships since the majority of cabins are occupied by just two people. 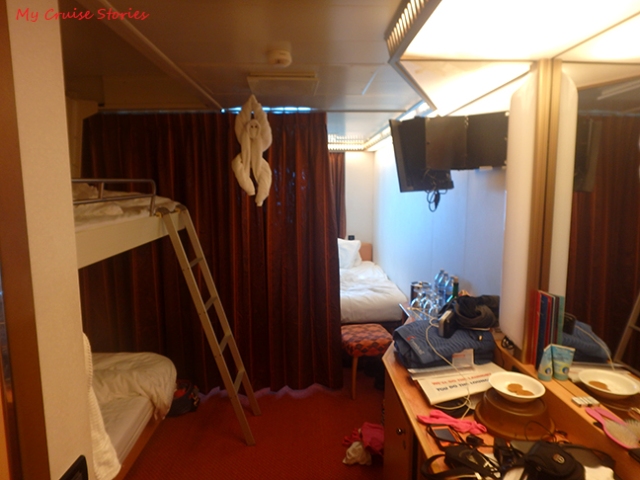 When staying in a cruise ship cabin with 5 people in it, things will get messy. We made sure to pick up everything off the floor twice a day before leaving the room when it was near time for the steward to clean. Mostly toys and kid’s clothes. Every flat surface was always covered in stuff, but then again if there’s a flat surface anywhere at home it doesn’t take my husband long to pile stuff on it there either. The room had 4 closets, one with shelves and 3 with hanging space of which two were normal and one had the bar hanging so that clothes are in front or behind each other rather than in the normal line where you can see them all from the side. It also had several drawers and the nightstands open up into little cupboards. Because two of the people in the room were small kids with tiny little clothes we had room for everything, but 5 adults or people with bigger kids in one of these rooms might need to pack light so it’s a good thing Carnival ships all have self-serve launderettes. We did ask the steward for some extra hangers and that definitely helped. 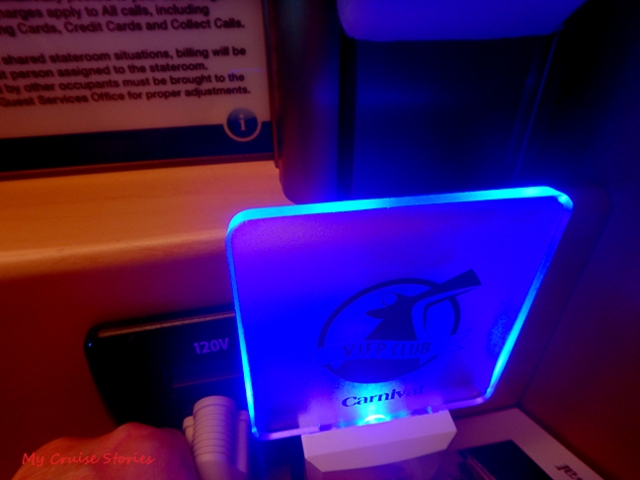 We had some space under the beds to put suitcases, but part of the space under one of them was taken up by what would be the back of the couch if it wasn’t getting used for a bed. The kids’ little suitcases full of toys just stayed between beds. There were some pretty big drawers under the couch bed, but one of ours didn’t open and the other was occupied by spare bedding so those were unusable for us. This room had 2 outlets, which is double what ships often have. We plugged a nightlight for the kids into one of them and a power bar in the other. 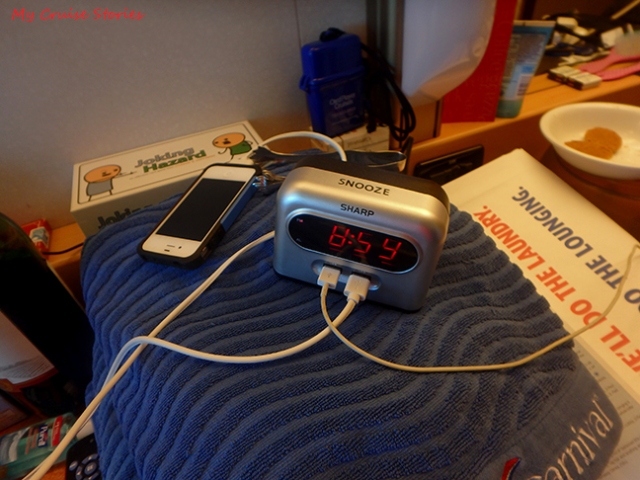 I have a digital clock with two USB ports so for the space of the one plug-in that the clock took we could charge two electronic devices and know the time. We had to set the clock so both Hannah in the bed over the couch and me in the lone one could see the clock at night because that’s the way we roll and nobody else cared. Other spaces on the power strip were used to charge other devices or camera batteries, whatever was needed at the time. Even with two people powerbars are often a necessity on most ships if you bring things like phones, computers, and cameras. 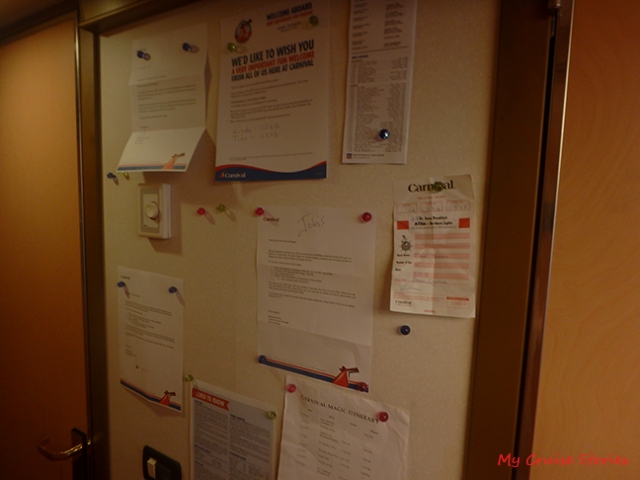 I always bring magnets on cruises to keep paperwork organized on the wall since most ships have magnetic walls in the cabins. Even on older ships where the walls aren’t magnetic the doors usually are so occasionally I’ve had to hang things there. With so many people the magnets were invaluable in being able to find things like shore excursion tickets, the itinerary, and even the daily Fun Times since the countertop was often strewn with various people’s items as well as piled with the electronic devices of 5 people, cruise line beach towels, and the ice bucket and water bottles left in there by the crew. We had the steward remove the water bottles you have to pay for first thing, but since everyone red and above gets a free bottle of water we still had 5 since even the kids had sailed with Carnival before. (For those who don’t sail Carnival, red is the color of your ship’s card from your second sailing until you accumulate enough points for gold. After enough cruises the card becomes platinum and finally diamond with each level of the loyalty program getting more perks.)

When cruising with 5 people in the same room you have to take each other’s habits into account. Some need more sleep than others, particularly when a couple of them are young children. It helps if you know how to open doors quietly, though no matter whether you hold the knob so nothing bangs or clicks it isn’t quiet if the door squeaks. On boarding day our bathroom door squeaked quite loudly, but maintenance came and oiled it soon after we asked the steward if they could. That helped a lot since somebody is bound to need a bathroom while others are sleeping with that many people.

the Magic had nice art in the hallways between guest cabins

The room had enough space that we never really felt crowded, though it would have been nice if the tub room had more storage space so people wouldn’t have all their things in the only bathroom with a toilet and have to either move them to the other one for use or be in the one someone would invariably need. That’s a minor inconvenience though considering how much money we saved over having two separate cabins. There was a public bathroom a few decks up the nearest stairway which came in handy sometimes. Having an extra place to shower or bathe a kid definitely helped when everyone came back from waterslides or the beach to get ready for dinner around the same time.

there’s a desktop under there somewhere

5 people in a cabin makes a lot more work for the steward, but ours was always cheerful and helpful. He even kept a smile the day he had to change the sheets on two beds because the kids left brown streaks. Sheri insisted the ones on my bed were chocolate from sticky little fingers, but her bed got brown spots when Daniel sat on it naked just after using the bathroom. We left the steward a good tip.

the window built up a collection of animals

We enjoyed our cruise in the 5-person room. There were 4 more people cruising with us staying in other rooms. At times we had all 9 in our room since it was the biggest. With the 3 lower beds as well as a stool everyone found somewhere to sit.

Other cabins on Carnival Magic