Posted on May 10, 2019 by LBcruiseshipblogger

Vista in New York – photo taken on the Intrepid

We definitely made the right choice upgrading to a balcony on the port side for our Carnival Vista Europe and Transatlantic cruise. We had originally booked an inside room on deck 1, but a couple months before sailing the upgrade fairy called with a sale on balcony rooms. They wanted to put us in a starboard side cabin, but since the promenade deck outside public smoking area is on the starboard side I insisted on port if we were to make the move. 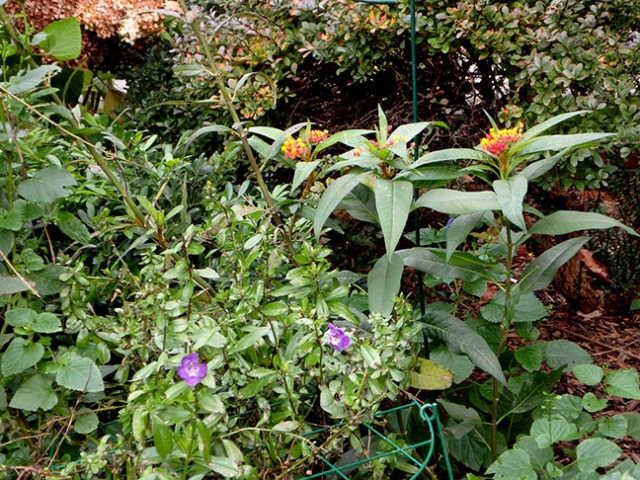 We had a starboard side balcony on the Breeze transatlantic and could never use it due to the smoke from people’s cigars on the public deck. The starboard one would have been near the center of the ship and the upgrade fairy seemed to think the only port side one available for both the Europe and Transatlantic cruises would not be as good, but what is the point of a balcony if you can’t use it? Anyway bow or stern are fine to us. We are rarely near the middle because those cabins usually cost more.

As it turned out, besides the sun being on the port side for most of the crossing, we also passed by the Statue of Liberty on that side at around 3:30am coming in to New York at the end of the cruise so we were able to see it from our own balcony rather than trying to find a view from a public deck in the middle of the night. Someone we ran into who had a starboard side balcony said theirs was cold and windy most of the cruise and they rarely used it whereas we used ours quite a lot. Shady deck chairs with a view are hard to come by in the public areas and never available because some selfish person will stake them out all day whether they are actually using them or not. 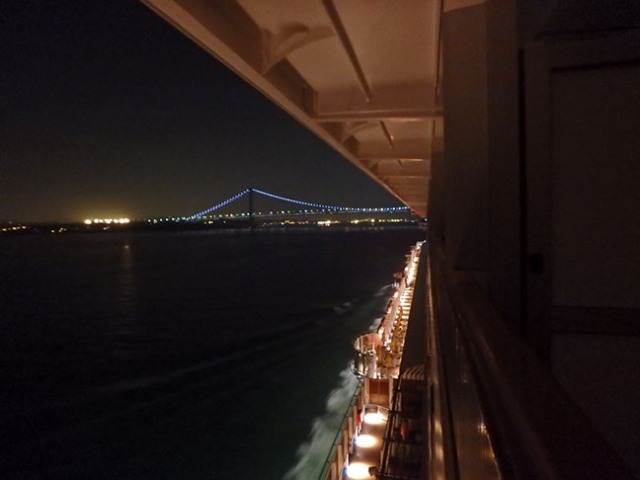 We were on deck 9 and deck 10 overhangs a bit so we always had shade to sit in as well as shelter when it rained. The room wasn’t perfect though. We were under the seating area to the 24-hour pizza place so people tended to scrape chairs overhead during the night and someone somewhere in the vicinity – we think the cabin below us – often smoked in their room even though it is a fire hazard and against the rules, which often made our cabin smell like an ashtray.

helicopter buzzing around at night

A helicopter buzzed around the ship while it cruised into New York. My husband figured Carnival probably hired it to film the Vista arriving. At one point it hovered in the sky and then appeared to fly backwards. I suppose it was probably an optical illusion, but it certainly looked as if it were flying backward for a few minutes, then it went forward again.

Our cruise started in Athens, Greece and ended in New York. Not having ever been to New York before, we booked a hotel for a couple nights so we could see a few things prior to flying home. Our hotel was out in Queens, which is more affordable than Manhattan and closer to the airport. We had a subway station nearby. It was far enough from the heart of the city that the trains were above ground rather than below. As in way above on raised platforms.

The taxi ride out of town through the traffic took a lot longer than the subway ride back in. Cost a lot more too. The taxi line was the worst I’ve ever seen at any port. It was on a public street rather than at the port itself. People and taxis were lined up all the way down the block, but the guy running the show at the head of the line did not want to let anyone in anything but the one taxi at the very front of the line. Loading just one car at a time meant the people and taxis all had a very long wait. Especially since even though it would take that taxi several minutes to get out of line and into the traffic he would make everyone wait until it left and the next one moved up rather than moving on down the line and loading the next car while that one waited to leave.

New York from the water taxi

Eventually one of the drivers got tired of sitting there wasting time. He got out, opened the door, and let the people next to his car in. The rest of the line followed suit so we got the car that happened to be next to us at the time. There were plenty more taxis lined up on the next block waiting their turn so that whole line was full again in minutes for anyone who did not get a car. It did not increase the wait time one bit for whoever had finally made it to the front of the line, but it did slightly shorten the line of people waiting, and definitely shortened the wait considerably for those of us lucky enough to get a car. 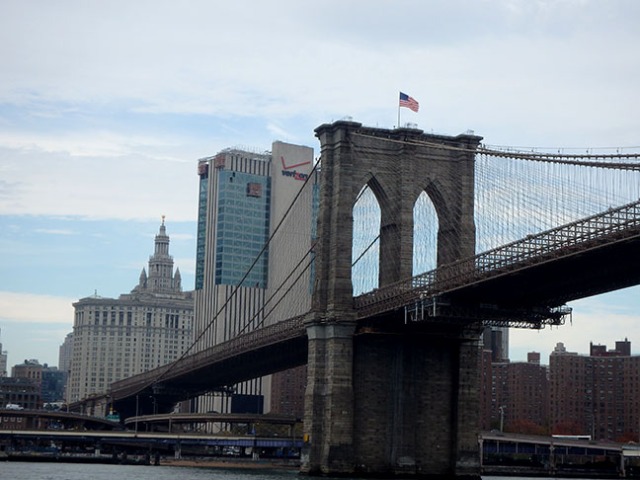 If we ever disembark in New York again I’d call an uber. Subways are cheaper, but besides being a bit too crowded for luggage they also don’t take you to the door of the hotel which would require finding it yourself. After checking in and getting settled though subways are great. We rode them all around town like real New Yorkers and never took a cab again until time to go to the airport. 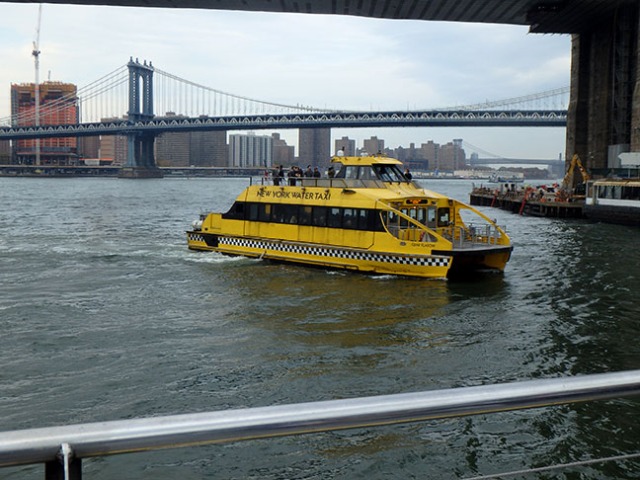 water taxi by the Brooklyn Bridge

We’d always heard New Yorkers were unfriendly, but did not find that to be so. If we pulled out the subway map anyone nearby was always ready to offer up advice. People on the subway were friendly too, no matter how packed in we all were. Even when we were just looking in the window of a shop one day a local passing by said there was a similar store a couple blocks down that had better stuff cheaper. There were of course people trying to sell expensive tours to anyone they pegged as a tourist, but they moved on when told no.

closer view of the Statue of Liberty

We’ve done hop on hop off busses in other places, but they wanted a lot of money for them in New York. The water taxi was sort of like a hop on hop off bus only on the water – and a lot less money than what they wanted for the hop on hop off bus (which must also have boats because we saw some painted up just like the busses). We also saw another brand of double decker tour bus, but don’t know if the price is any better. Riding the water taxi also meant we could ride their shuttles, which are busses that take people from a ferry dock where the water taxis stop out to the places where tourists like to go and where locals commuting by ferry need to go. The ferry dock isn’t just for the water taxis. There were also a lot of walk-on ferries to New Jersey, mostly for locals commuting to and from work.

We got off at the ferry dock so we could go to Central Park. This involved riding a shuttle bus out to a stop a couple blocks from the park and then walking the rest of the way there. The busses say ferries and stop at public bus stops along their route. People who are headed to or from the public ferries ride them too. They are supposed to come every 20 minutes, but we waited 35 when we were ready to return. There was another ferry bus just behind ours so they must get off their schedule at times.

Central Park was not what I expected. I guess I just imagined a big woods with dirt trails, but it has paved paths, a zoo, lots of grassy areas, gardens with flowers, a pond with RC sailboats, and more. It is 2 miles long and just 3 blocks wide.

The water taxi people said at one stop it would be an hour for the next boat, but at the one we got off they said every 20 minutes. They lied. They also said the boats ran until 9:30pm, but the one we caught at 5:30pm was the last one of the night so we are lucky we did not try to catch a later one.

On our second day in New York we took the subway into Manhattan again, this time to visit Times Square. Of course taking the subway in itself is a very New York thing to do – and a cheap and efficient means of travel. I expected something more than a little paved space between buildings covered in neon signs for something as famous as Times Square. It didn’t seem big enough for the sort of crowds it attracts at times like New Year’s Eve.

The most interesting thing we saw there was some acrobatic street performers whose show was pretty good until they started hustling people for more money than they wanted to donate. After checking out Times Square we walked down to the waterfront and saw the Intrepid Museum. The Intrepid is an aircraft carrier from World War 2 and the Vietnam War that has been converted into a museum. It was docked right next to the Vista, which stayed in New York a couple days after our cruise and photobomed all our photos of planes on the flight deck of the aircraft carrier. 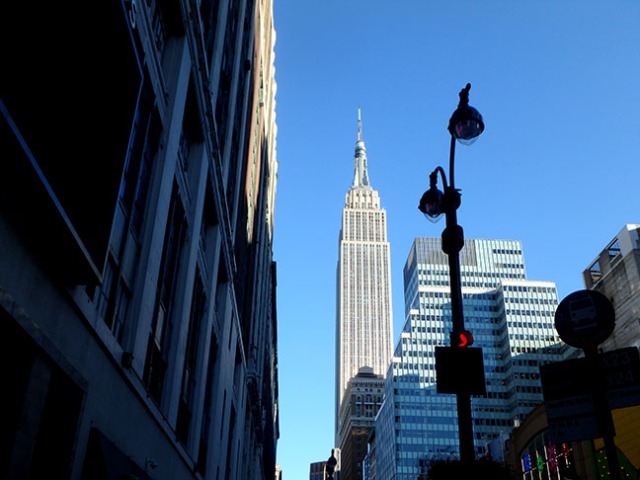 We finished our tour of New York with a visit to the outside of the Empire State Building (which is better viewed from enough distance to see the top if you aren’t going inside.) We had dinner in the Korean section and took a walk through Penn Station to catch the subway back to the hotel. Unlike most of the subway stops, Penn Station is huge. It’s got a whole shopping center inside and platforms for regular trains as well as subway trains.