Food on Explorer of the Seas

Posted on April 19, 2019 by LBcruiseshipblogger

Royal Caribbean Explorer of the Seas

Royal Caribbean has lots of food options on their ships, and Explorer of the Seas is no exception. With a preference for eating at places that are included in the cost of the cruise rather than those that charge extra, we had most of our meals at either the dining room or the buffet. Free food could also be found at the 24-hour café on the Royal Promenade and at lunchtime in a little stand along the walkway near the café.

roulade of chicken at the Captain’s table

We were fortunate enough to be invited to the captain’s table on the first formal night. It’s in the dining room, but with a special menu just for that table. The food there was delicious, our best meal of the entire cruise.

Food in the dining room mostly good but not impressive. Like all ships we’ve sailed on some days had far better menus than others with formal nights generally having the best food. Sometimes you have to decide among several things that sound really good. Other days it’s a struggle to find anything appealing. Luckily there are some every day options for those times when there’s nothing interesting on the daily menu. Some items were very good and some not so much. Maybe the entire meal, or sometimes one thing on the plate would be excellent, accompanied by things we’d rather do without. Or substitute for other things, which is also an option when ordering. The other people at our table had all sailed with Royal Caribbean before and said the food on this ship was not up to their usual standards. Perhaps because as a long cruise with very few ports there weren’t many options for restocking fresh food items. The menu has well-marked gluten free, dairy free, vegetarian, and low-calorie choices. 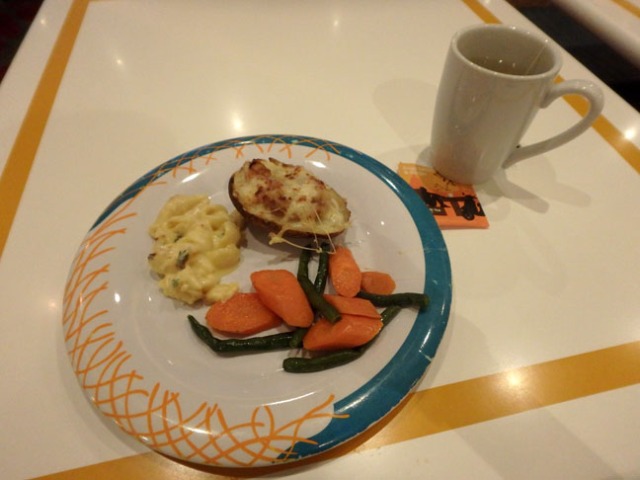 dinner at the buffet

While we often have breakfast or lunch on cruise ship buffets, we rarely ever eat dinner there. On the Explorer I tried it on the first night. Dinner there was actually quite nice. There was no sign of the usual buffet crowds present at breakfast or lunch so it was easy to find a seat and pretty quiet and peaceful. The food was good and they even had an ice cream station that is not there at lunchtime.

The buffet has a lot of different stations. There is a lot of repetition from one station to another for some items so when lines are long there is often somewhere else to get the same thing with a shorter line. Some stations do serve unique items not found anywhere else on the buffet though. Near the back there’s a gluten free corner. It has a pretty good selection of different gluten free items, but it also seems to have mostly the same things every day so over time on a long cruise it’s not that much choice. At least it’s there though, and there are some items in the regular part of the buffet that are also gluten free like fruit and most things on the salad bar as well as vegetables and some proteins.

We did try a couple of the pay-extra eateries. Johnny Rockets was fun to do once for the experience, but the food was not worth the extra money. There was nothing on a bun other than beef. The French fries were the same as what the buffet served. Milkshakes are an additional charge above the price of eating there, though sundaes are included in the meal. 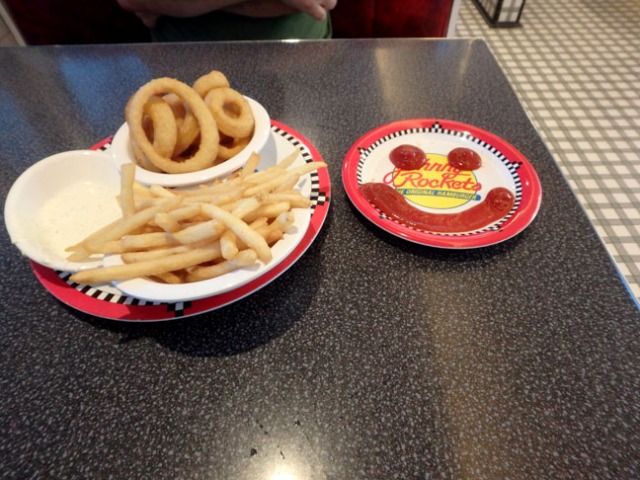 Some of our tablemates tried Chops Grill, the ship’s steak house and premier eatery. They quite enjoyed it with one couple going back several times. The ship also had a Japanese place called Izumi but we did not talk to anyone who had tried it so I have no idea whether or not people like it. I’m not a fan of sushi so it wouldn’t be my thing.

Giovanni’s restaurant on Explorer of the Seas

Giovanni’s Italian food was very good. Though you can have more than one appetizer, they are huge. The meal also includes an entrée and dessert. These items are not available elsewhere on the ship. The dessert cart held several tempting treats. Tiramisu is the most recommended, but I don’t like coffee or anything with coffee in it and had chocolate cake instead.

café on the Royal Promenade

The 24 hour café on the promenade had pastries and muffins at breakfast, sandwiches, pizza, and sweets for lunch and dinner, and sandwiches and things overnight. Only the Ben & Jerry’s ice cream and specialty coffee cost extra. The rest of the things at the café are free. They also had regular fresh-brewed serve yourself coffee, hot water and an assortment of teas at no charge as well as iced tea and cold water.

lamingtons from the Royal Promenade café on Explorer of the Seas

Some afternoons the café had lamingtons. At first they were available all afternoon, but as the cruise progressed they vanished quickly once all the non-Australian passengers figured out what they were and how delicious they are. That was one of the best desserts on the entire ship. Our table mates didn’t know what they were when I mentioned them and never managed to get to the café early enough when they had some so one day I got a whole plate full and brought them to dinner to share. They thought these chocolate dipped coconut topped cakes were awesome too.

Overall the ship had plenty of food and lots of choices so there’s not much likelihood of going hungry. Anyone who is not extremely picky or restricted by severe dietary limitations could always find something they liked. (And those with dietary restrictions can make arrangements in advance so there is food available for them too.)

MyCruiseStories blog tells stories about adventures in cruising on ships big and small. Things to do onboard and in port. Anything connected to cruising. Also food, travel, recipes, towel animals, and the occasional random blog.
View all posts by LBcruiseshipblogger →
This entry was posted in Cruise Food, Explorer of the Seas, Royal Caribbean and tagged #cruisefood, cruise, cruise food, Explorer of the Seas, photos, Royal Caribbean, travel. Bookmark the permalink.