Posted on April 12, 2019 by LBcruiseshipblogger

Cocoa Beach – internet photo, but this is how it looked – nearly deserted

After visiting Kennedy Space Center the day we disembarked from Carnival Magic in Port Canaveral, Florida, we expected to spend the next day in Cocoa Beach at the beach and in the pool at the vacation house we rented for a couple nights. Sheri and I had stayed in Cocoa Beach once before years ago and kept ourselves amused all day with cheap Styrofoam boogie boards and ocean waves. The house we stayed at just happened to have boogie boards among their generous collection of beach toys, but mother nature had other ideas. 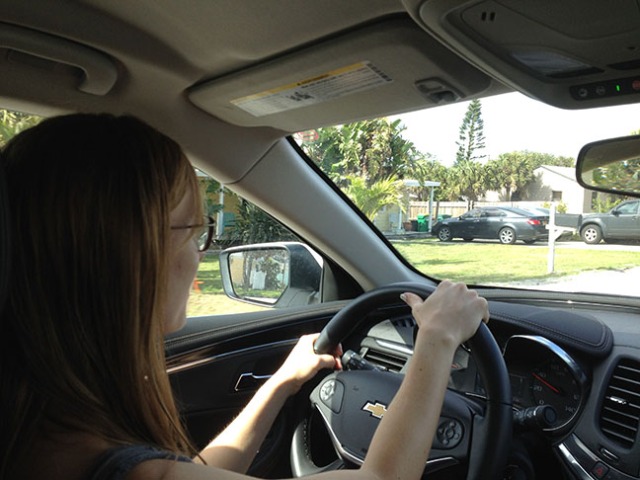 There’s no Waffle House where any of us live and we remembered eating there and liking it before so we went to the closest one for breakfast. For a tiny place with more employees than they had room for it was a bit surprising that none of them seemed too anxious to take our money after we finished eating, but the food was good. The waitress said the weather report for the day was likely to include tornados in the evening, something quite uncommon for that area.

Our vacation house sat on the edge of a river, with the ocean beach across a street about a block away. When the river has whitecaps and even the pool has waves it’s not a safe day for small children to play in the ocean. They’d been promised a beach day though and the tornados weren’t expected until evening. We walked to the beach and stayed just long enough for the kids to make a couple sand castles in the wind. Nobody remembered to bring a camera or even a phone so we didn’t get any photos. Not too many people braved the beach on such a windy day, but we did see a couple people walking dogs and a couple others in the ocean braving the cold water for big waves. Maybe a good boogie boarding day for them, but definitely not safe for small children to go anywhere near the water.

pool by the river at the vacation rental house

Back at the house the kids played in the pool for awhile in spite of wind and cold water. Meanwhile a chair blew off the picnic area near the river and into the water. Sheri rescued it, but it got broken hitting rocks on the way in. The wind kicked up higher so we sent the kids inside and moved all the other yard furniture and a couple kayaks farther from the river into more sheltered areas of the yard. A couple staying in the upper floor of the house came out and helped us tie the kayaks down. Meanwhile part of the fence blew down. 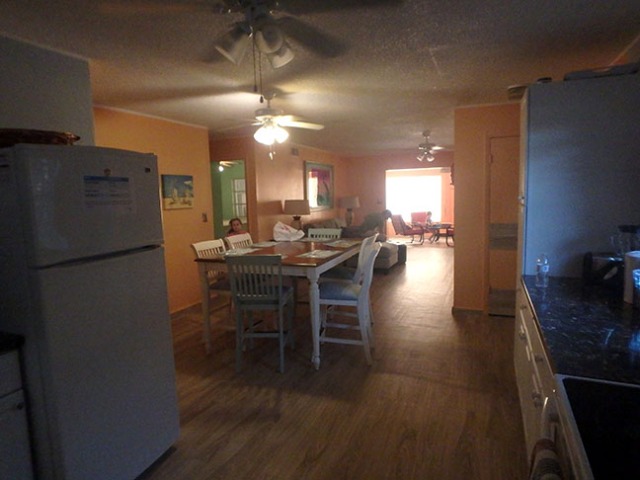 inside the vacation rental house

We cooked dinner at lunchtime and figured on sandwiches for dinner, just in case the power went out. It didn’t, but we did lose internet and TV when the storm fully kicked in that evening while we were watching the tornado warnings on TV. Our cell phones let out the alert signal, only instead of the usual amber alert following that awful noise they said the area was under tornado warning and to seek shelter. Our phones all did that a couple times. Luckily we were on the ground floor of a house with very thick walls and the recommended place to seek shelter was the interior of the ground floor of sturdy buildings away from windows. The house had hurricane shutters, but they only worked in one of the two rooms on the side facing the storm. 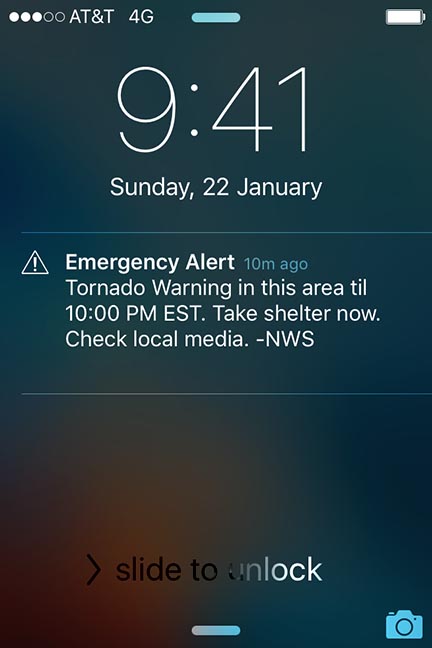 Lightning flashes started in the distance and soon approached close enough where the sound and light came simultaneously. Although it was dark outside, the lightning lit up both the pool and river light as day. Trees bent in the wind, but remained standing. Eventually pouring rain pounded the roof. Even if Sheri’s kids hadn’t been scared enough to want her to sleep with them they would all have ended up in the king-sized bed in the kid’s room since the roof in Sheri’s room leaked in the torrential rain. It was on the river end of the house in an area with that bedroom and a sunroom that appeared to be an addition to the original house or perhaps a former porch closed in to make more rooms. When we went in to close the hurricane shutters we found a big puddle in the middle of the floor as well as water dripping over the bed. Quickly we moved her luggage out, though some things had already gotten wet. There were a couple buckets in a kitchen cupboard so I put one under each leak. The owners of the house live in Germany and had it managed by a local company so it’s likely they didn’t know about the leaks even though water stains on the ceiling showed it was not the first time it had happened. Sheri sent them an email after the storm passed to alert them of all the damage – and to let them know the cause.

Neighboring states like Georgia got hit hard with tornadoes, but none actually formed where we were. Before we lost TV reception the newscaster was saying something about swirling winds though so it may have come pretty close to forming some. A lot of planes got diverted to other airports, but by morning when we were all flying out they got the schedule pretty well back on track so we managed to leave more or less on time. We saw a lot of branches on the roads around the airport, and the clean-up crew picking them up. We had some turbulence at take-off since there was still some wind, but not so much to interfere with planes flying.

The fence just starting to blow down. The palapa roof over the picnic table blew off too.

Things may not have gone as planned at Cocoa Beach, but we definitely had a memorable visit.

MyCruiseStories blog tells stories about adventures in cruising on ships big and small. Things to do onboard and in port. Anything connected to cruising. Also food, travel, recipes, towel animals, and the occasional random blog.
View all posts by LBcruiseshipblogger →
This entry was posted in Port Cities, Port City Side Trips, USA and tagged beach house, Cocoa Beach, storm, tornado warning, tornado watch, travel, vacation, vacation rental. Bookmark the permalink.