Posted on March 22, 2019 by LBcruiseshipblogger 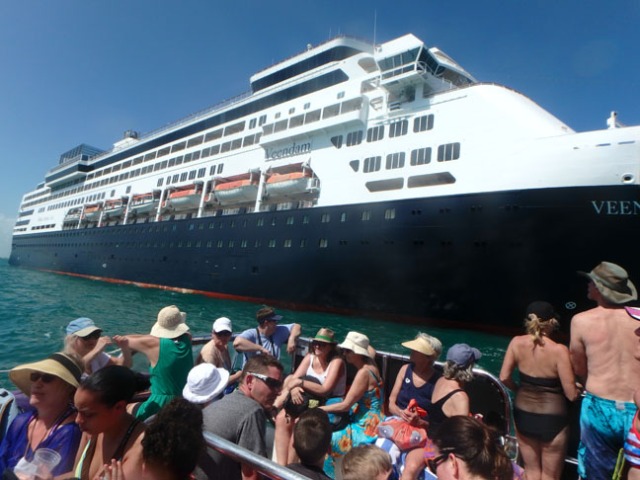 snorkel boat returning to the Veendam in Belize

It’s a long tender ride from ship to shore in Belize. Tenders are used when there is no cruise ship dock and the ship waits offshore while smaller boats bring passengers to land. These are sometimes the taller lifeboats off the ship and sometimes somewhat bigger boats that come out from shore to bring people in. We did see someone offering snorkel tours at the dock last time we were there, but that was a few years ago. Not knowing if that would be available this time, and not wanting to drag snorkel gear around if it wasn’t or have to go back for it if it was, we booked an excursion through our ship, the Holland America Veendam. (Yes the excursions always provide snorkel gear, we’d just rather use our own.) The other advantage of booking water-based excursions through the ship in Belize is that unlike other ports where the tendering distance is not so far, in Belize excursion boats pick you up right at the ship. At least that was our past experience from other cruises. 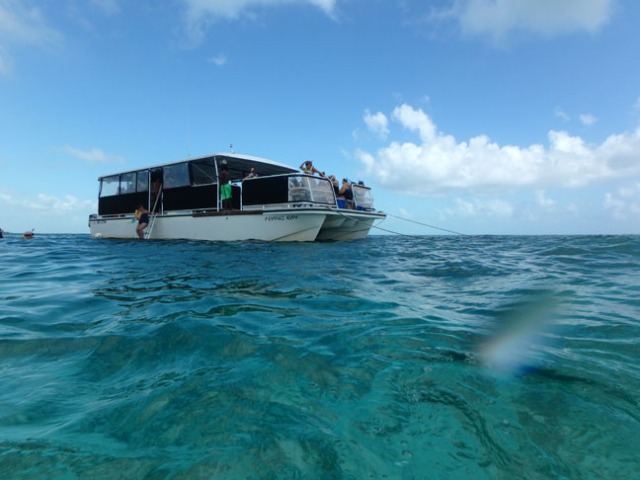 I didn’t do any ship’s excursions last time I sailed on the Veendam (out of Boston) so I’m not sure if it is this ship in general or just the crew on our Cuba trip, but out of all the cruises we’ve ever done on ships of varying sizes, this one had the absolute worst organization when it came to shore excursions and getting people off the ship. Granted it’s a small ship, but it still holds 1350 passengers so lines can get out of control. Often ships will have different excursions meet in different places around the ship (or sometimes on shore when the ship is docked). The Veendam had everyone come to the theater. Then they set their table up in front of the stage where there are multiple ways to get to it rather than outside one of the doors where there is just one way to get to the table like most other ships. The tickets said starboard side, but while most people lined up there, a few came in the other side, walked right past the line and went straight to the table. They should have been sent to the end of the line from there, but were not. Meanwhile the line went out of the theater, down the hall, and wound around near the stairs and elevators where newcomers had no idea where the end was and ended up joining in wherever happened to be handy. The tickets specified what time to be there for each excursion, but people tend to ignore that coming very early to last minute depending on their individual habits. 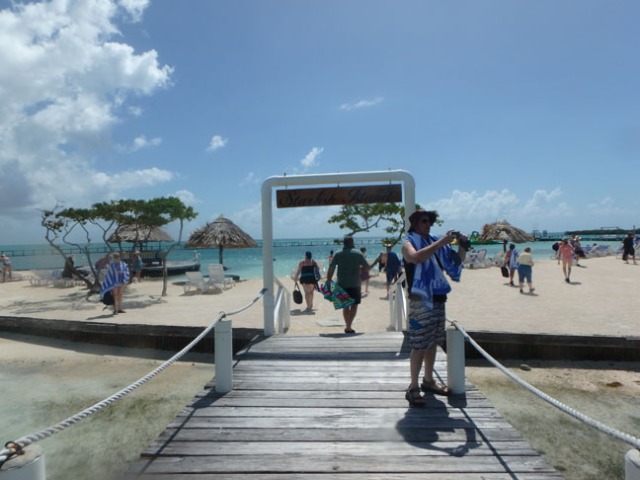 They did not even separate bus or boat tours other than by the numbered stickers given, nor did individual tours have anywhere specific to sit and wait for that tour to be called, unlike other ships we’ve been on that often seat everyone on the same tour together. Ships nearly always have everyone on a specific tour follow a guide out of the meeting area in a group, where on the Veendam it was everyone for themselves meaning people leaving the theater sometimes got mixed in with those on different tours. More people than they had room for crowded the lower theater level. Though they suggested some wait upstairs not many actually did. We went up there and even though it’s one more floor down to the tender portal there was no crowd to fight our way through on the way to the door so we got a faster start. They kept announcing that everyone had to wait for the shore tenders so it would take awhile to get all tours to shore. They got up to number 4 and we had number 8. Shortly after a brief announcement saying some groups might be taken out of order they called number 8 saying that we were special enough to have a private tender. Which probably ticked off all the clueless people still waiting thinking we got priority on one of the shore tenders. Only it wasn’t a tender, it was the excursion boat. Instead of leaving groups 5-7 fuming they could have just been honest and said it was a sea based excursion leaving on the tour boat. 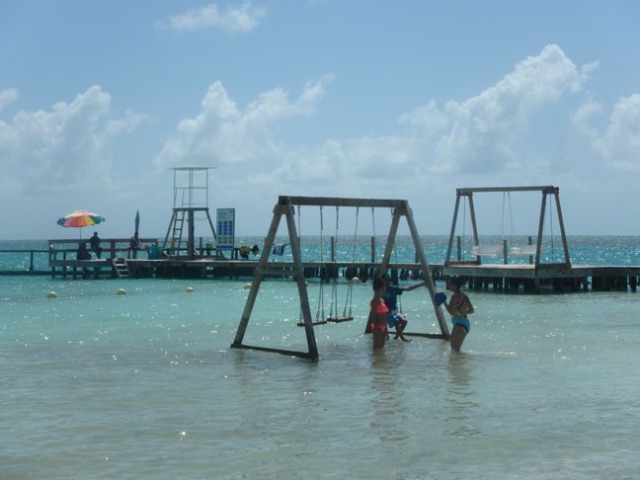 swings in the water and on the dock at Starfish Island

Our excursion was called Starfish Snorkel and Island Getaway. The name comes from Starfish Island. The boat comes from there and they ran the tour. It was quite large for a snorkel excursion boat. Kind of resembled a barge with seats and a roof over most of it. Part of it also had canvas sides. It did have one head (bathroom) and a small bar area at the back. On the way to the reef they served water. Once we finished snorkeling they had rum punch for those who wanted it. 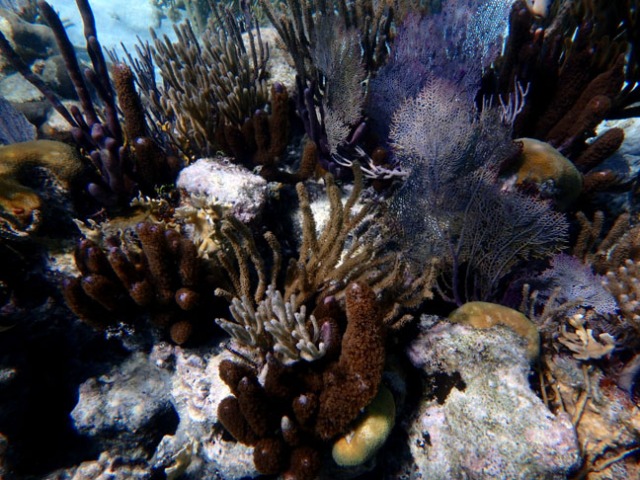 Belize is on the Mesoamerican barrier reef,  the second largest coral reef in the world stretching over 600 miles from Mexico’s Yucatan Peninsula to Honduras. The snorkeling where we went was pretty good by Caribbean standards, but didn’t measure up to what you find in Australia’s Great Barrier Reef or around the Loyalty Islands of New Caledonia. When we took the independent (not through a cruise ship) Trilogy excursion in Hawaii I was happy to see that they provided reef safe sunscreen for people to use as well as educating everyone onboard about the need for using it. Considering the number of people cruise ships bring to coral reefs each week you would think they would all jump onboard with educating and promoting any way to save the reefs that they can, but none of them ever do. 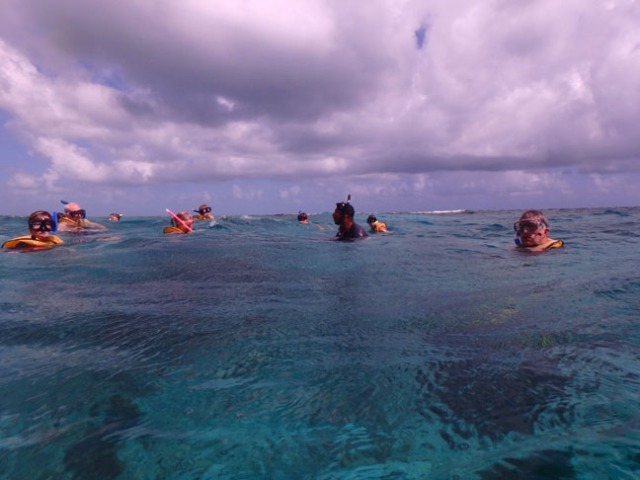 Coral in the Caribbean is at an 80% loss. The chemicals in ordinary sunscreens kill coral and the oils smother it. One drop in the amount of water held by an Olympic swimming pool is all it takes to cause damage so having hundreds of people slathered in it daily is a serious problem and most of the passengers have no idea they are doing any harm. Ships rarely sell reef safe sunscreen in their onboard shops, and I’ve even seen one cruise line on facebook advising people to use bugspray on all their excursions. Bugspray kills coral larvae, and in all the cruises we’ve done around the world I’ve never once seen a mosquito anywhere near coral reefs or beaches. Mosquitos breed in stagnant swampy water, not salt water. Even natural herbal based bug products can be toxic to coral. If it kills a bug it kills the coral too. If you think you need protection from mosquitos near a tropical beach, put a dryer sheet in the pocket of clothes you wear on land to keep them at bay. 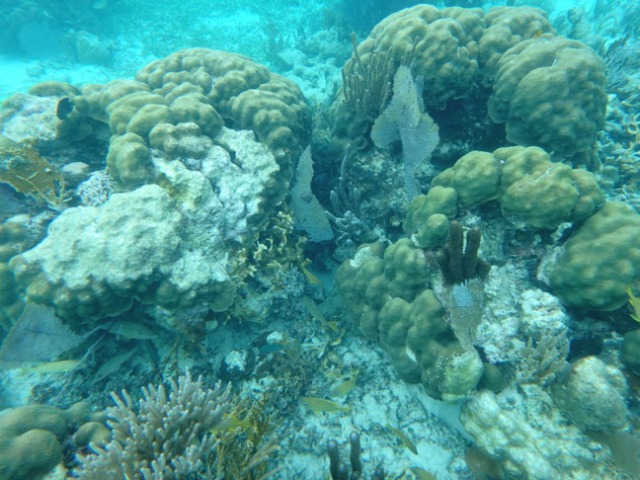 Without offering anyone reef-safe sunscreen or even once mentioning the dangers ordinary sunscreen poses to coral, the excursion boat anchored up in a sandy area. Passengers could choose to go in the first timer, intermediate, or advanced snorkel groups. Each one had a different guide so it kept things from being quite as crowded as if it was all one group, though there were still quite a lot of people. They did not let anyone swim out on their own. Everyone had to pick one of their groups and stay with them. 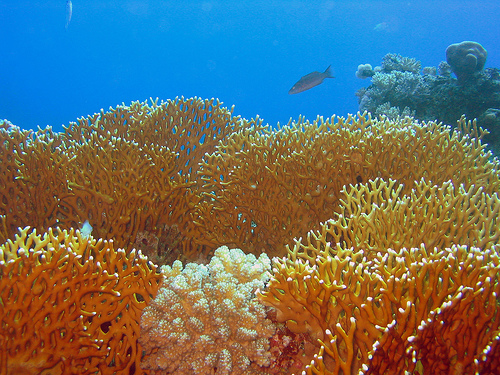 The water had deeper and shallower places. Out in the farthest area we went from the ship the tips of some coral rose above the water in an area we could see, but did not go to. The guide called that fire coral and said it would sting if you touched it as well as likely getting cut on it. Fire coral is not a true coral, but rather a similarly structured colony building organism disguising itself as coral that is actually more closely related to other stinging sea creatures like jellyfish and sea anemones. It can resemble several different types of coral and is sometimes mistaken for seaweed. It grows well in strong currents. The patch we saw was sticking out of the roughest water in the area. It was a windy day with some waves that got bigger the farther out that way we went. The guide said there was a drop-off a bit farther on, but it was not safe to go that far that day due to the waves and a strong undertow. Too bad, there may have been some interesting things to see near the drop-off. 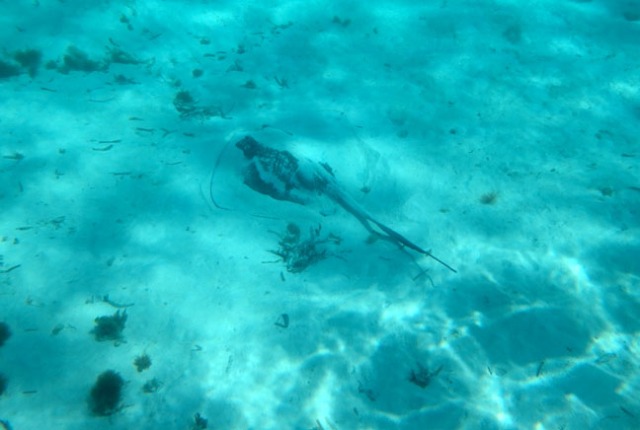 stingray partly buried in the sand

We snorkeled over some areas where the coral was just far enough under the surface to float over, some where it was quite a ways down, and some where the bottom had sand or sea grass. One of the sandy areas had a couple barracudas swimming around. Another had a large stingray sitting on the bottom. I saw a couple sand-colored little flat fish scooting along the sand in one place, but I don’t know what sort of fish they were. 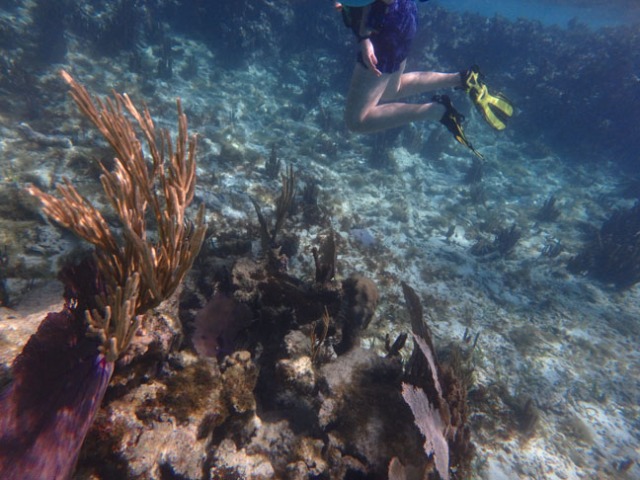 There were lots of different types of coral. Some fan coral and brain coral as well as soft coral and many other types. Caribbean coral often doesn’t have much color to it, usually being shades of brown or yellow, but this place had several types in purple. 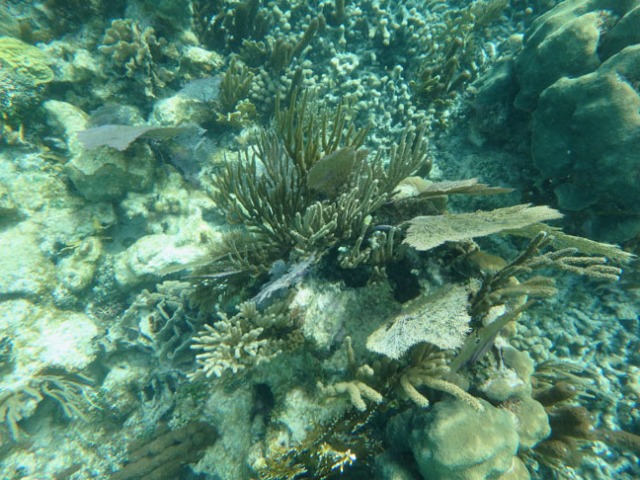 Where there’s coral there’s fish and this was no exception. Fish large and small, some bright and colorful and others not, swam about the coral and in and out of it’s branches, overhangs, and hiding places. There were also conch shells with living conch inside, sea urchins, and spiny lobsters. There’s lots of life under the sea. 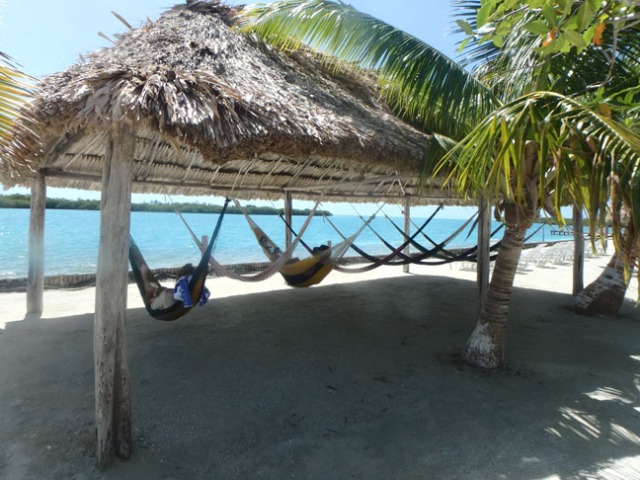 After an hour of snorkeling we got back on the boat for a short trip to Starfish Island. This small sand island in the mangroves had a swimming area, small playground, lots of beach chairs, some hammocks, swings in the water and on a dock, and a volleyball court. For an extra charge they had food, a bar, a gift shop, and water toy rentals for kayaks and things. 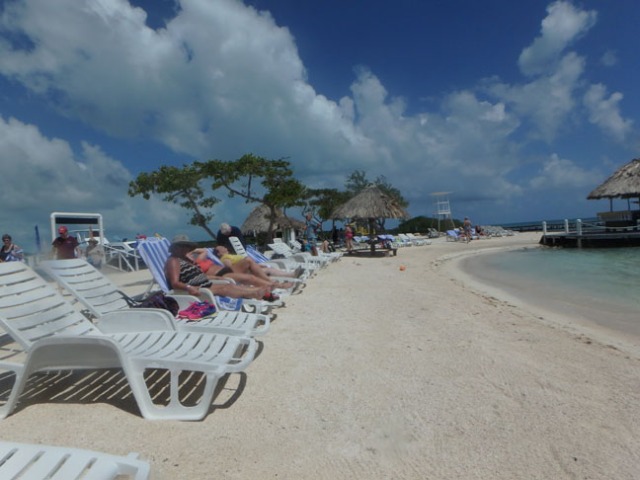 The island had a lot more beach chairs than people. Other than our excursion, there was just one other group there on a different excursion from our ship that went straight from the ship to the island on a smaller boat than ours. Which meant that even though the island was small enough to walk from one end to the other in under 5 minutes it was not crowded at all. Most of the chairs were in the sun, but some had shade from trees or nearby palapas – or the chair could be moved to the shade of a palapa. The palapas had small tables with picnic bench type seating around them. The two sets of hammocks also had shade being strung in a row under a palapa roof. 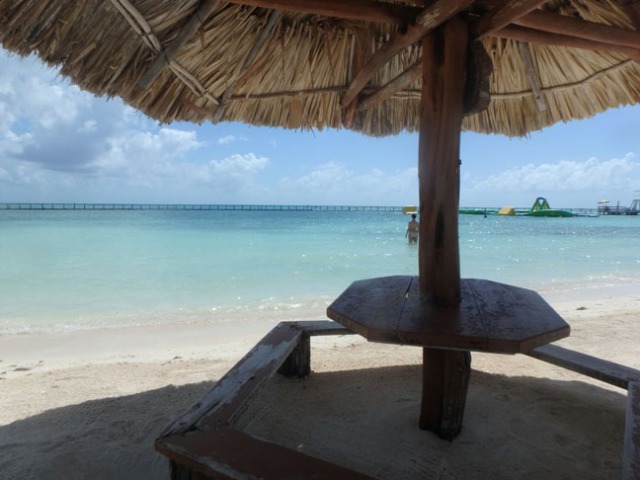 After a couple hours on the island the snorkel boat brought us back to the ship. People had time to catch a tender to port if they wanted to go to the mainland. We might have done that just to see what’s there if we had never been to Belize, but since we’ve been there before we didn’t.