Posted on January 4, 2019 by LBcruiseshipblogger

Alaska’s capital, Juneau, located along the Gastineau Channel of Alaska’s panhandle, is accessible only by boat or plane. Although there are no roads connecting Juneau to the rest of the state, cars can come and go by ferry on Alaska’s Marine Highway system which has ferry service all the way from Bellingham, Washington, along Alaska’s mainland coast, and on to Alaska’s Aleutian Islands.

last minute tour booths on the dock in Juneau

Juneau is a very popular cruise ship port with dock space for 4 ships and sometimes more anchored offshore and tendering passengers in. Holland America ships dock right in the heart of the tourist area of town at the base of Mount Roberts near the lower tram station. Princess has a dock a short walk away on a waterfront boardwalk, and the other dock just outside of town provides shuttle service bringing passengers who don’t wish to walk into town straight to the area near the tram station where they can find transportation to Mendenhall Glacier as well as a number of other things to do at all the little booths set up there when cruise ships come to town. Options often include things like whale watching and kayaking.

Juneau gets its name from early settler Joe Juneau, a gold prospector from Quebec who was the first prospector to find gold there along with his partner Richard Harris under the guidance of Chief Kowee in 1880. The settlement was first called Rockwell, then Harrisburg before finally settling on the name Juneau.

The first known European recorded in the area is Joseph Whidbey during George Vancouver’s explorations in 1794. After viewing the Gastineau Channel from the west and the south in August he proclaimed it too full of ice for ships. The channel looks quite different now without the ice and has plenty of traffic from cruise ships that would dwarf their sailboats.

Original occupants of the area came from the Auke and Taku tribes, ancestors of the modern-day Tlingit found there today. Although Russia had settlements in Alaska from 1784 to 1867, they never settled in the Juneau area. People of European descent came after the discovery of gold. Their mining village becoming the first American settlement after the USA purchased Alaska from Russia. Though the Russians hadn’t settled there and Russia no longer owned Alaska, the Russian Orthodox Church came at the request of the Tlingits who had converted to that religion in other regions of Alaska during the time of Russian occupation.

making fudge in the Alaska Fudge store in Juneau

Juneau became the capital in 1906 when the decline of the fur trade made the former capital of Sitka less important. Juneau was the largest city in Alaska for a time, but Anchorage is the biggest now. 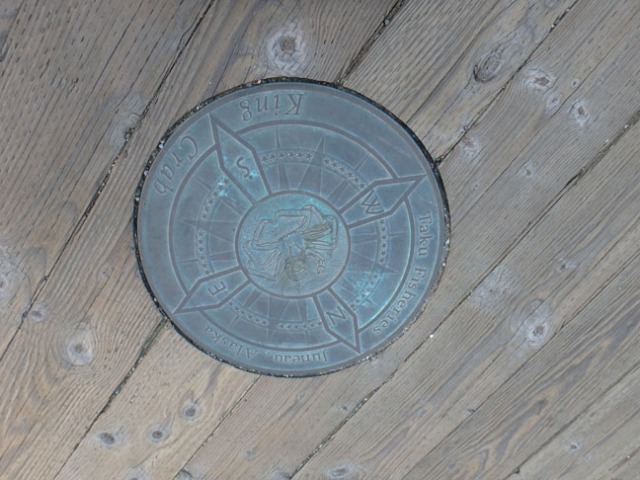 decoration in the boardwalk

Juneau’s climate is mild by Alaskan standards with average lows of 23 °F (−5 °C) in January and highs of 65 °F (18.3 °C) in July. It’s quite wet with the precipitation averaging rain or snow on 230 days a year. Snowfall comes mainly from September to March. Spring is the driest time of year and September and October the wettest. The government is Juneau’s biggest employer, but tourism and fishing also contribute a large portion of the economy.

The most popular things to do on port stops in Juneau are visit Mendenhall Glacier and take the tram to the top of Mount Roberts, but there are numerous other options whether booking excursions through the ship or finding a last minute tour in one of the booths at the port.

Passengers who just want to walk about town can get maps at the visitor’s center or print one out in advance so they know where to find the main attractions in town. There’s a boardwalk along the shore that runs from the Princess dock to well beyond the Holland America dock. Shops near the docks cater to cruise ship passengers selling mainly souvenirs, jewelry, and t-shirts. There’s plenty of pubs and eateries as well. It’s not too far of a stroll to find a drugstore for anyone in need of a few sundries at a better price than what they can find on the ship.

The last ships of the season won’t find as many options for things to do at the booths. Only 3 were open when we came in early October. Where the late season ships get the advantage is in the shops that close once the cruise season is over. They all have some heavily discounted merchandise with some of it available at less than half the original price. 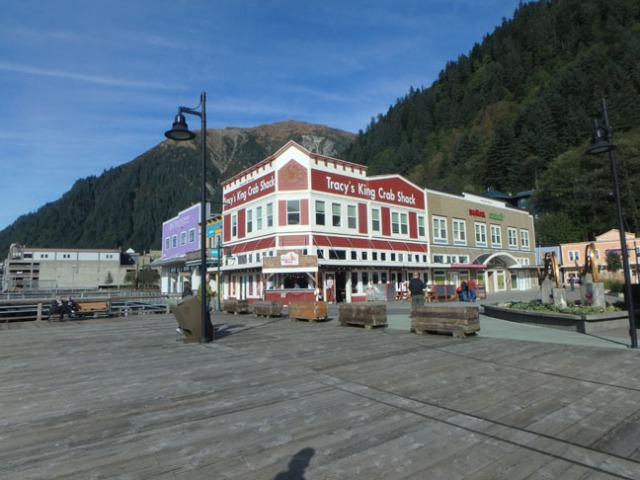 There’s a crab shack on the dock right near the ship and it’s only a block or so to walk to the ever popular Red Dog Saloon where their house drink is called a duck fart. The saloon has old-time seaside décor and a sawdust floor. It also has a gift shop.

Whether strolling through town or visiting nature there’s enough to see in Juneau that repeat visitors could do something different each time or go back to their favorite places.

MyCruiseStories blog tells stories about adventures in cruising on ships big and small. Things to do onboard and in port. Anything connected to cruising. Also food, travel, recipes, towel animals, and the occasional random blog.
View all posts by LBcruiseshipblogger →
This entry was posted in Alaska, Holland America, Port Cities, Ports of Call, USA, Westerdam and tagged Alaska, cruise ship port stops, Juneau, Juneau cruise port, photos. Bookmark the permalink.