Posted on February 16, 2018 by LBcruiseshipblogger 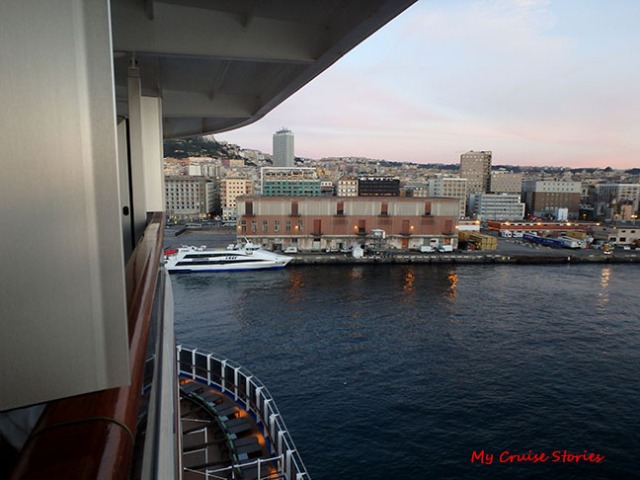 Naples view from the Vista

Pretty much everyone has heard of Pompeii, which was destroyed in an eruption of Mt. Vesuvius in 79 AD. Not so many know about the nearby town of Herculaneum. 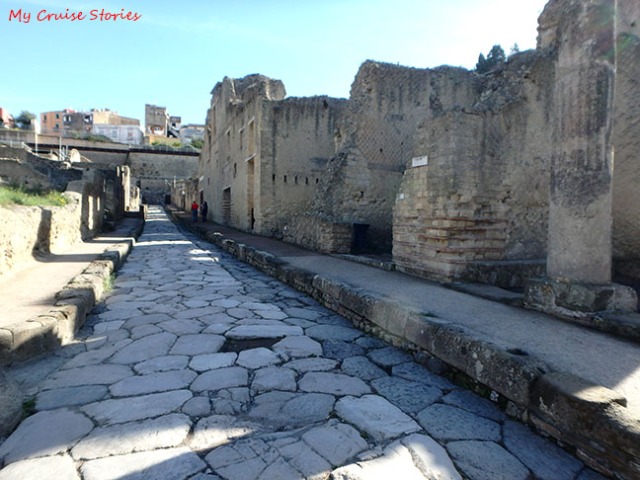 street and buildings in Herculaneum

At our port stop in Naples on Carnival Vista we took a ship’s excursion to Herculaneum. We would have liked to see Pompeii too, but the ship had no excursions to both and we didn’t want to venture out on our own having never used European trains before this trip. Plus we don’t speak Italian and did not know if there would be any signs in English. It is possible to see both places if you go by train on your own, but first you have to make it to the train station and then catch the correct trains. You would also have to fit it all in during the time the ship is in port. After our train experience at the previous port of Messina it was a relief to just sit back on the bus and let someone else get us there. 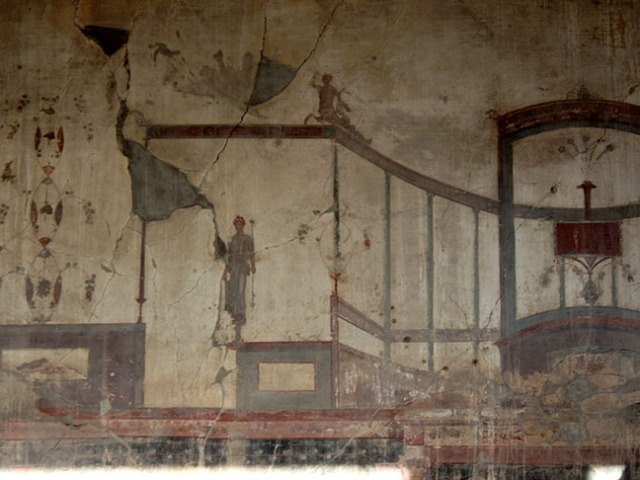 Our friend with a month of experience on European public transportation said it wouldn’t have been all that hard – so long as there were no strikes, unexpected train cancellations, or other work stoppages. Which are apparently common on European trains. The train that runs from Naples to Sorrento stops at both Pompeii and Herculaneum, but the Naples station is far enough from the cruise dock to need a bus or taxi to get there and I don’t know if either archaeological site is within walking distance of the train. We did not see any trains or train stations while we were at Herculaneum. 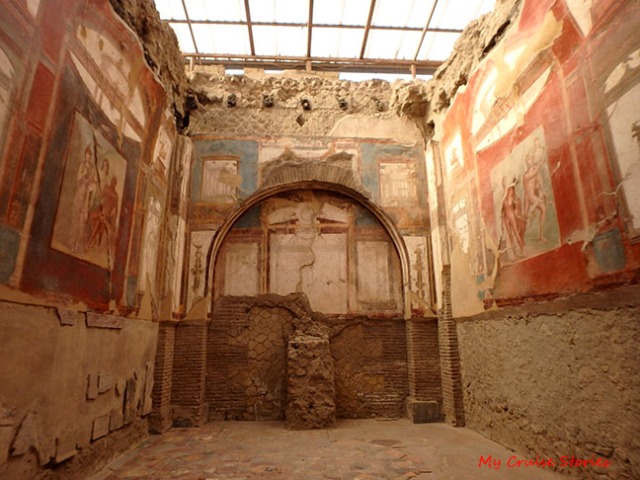 Herculaneum was buried in boiling mud in the same volcanic eruption of Mt. Vesuvius that destroyed the more famous Pompeii. I’d always heard the buildings in Herculaneum were intact and even the ship’s blurb about the shore excursion said they had found wood and fabrics preserved there. From what I had heard we rather expected to see a town frozen in time looking much like it did before that fateful blast of the volcano.

After waiting for our guide to buy tickets for the group (while wondering why that hadn’t been done in advance) we went through the entrance and got our first glimpse of Herculaneum over a railing. 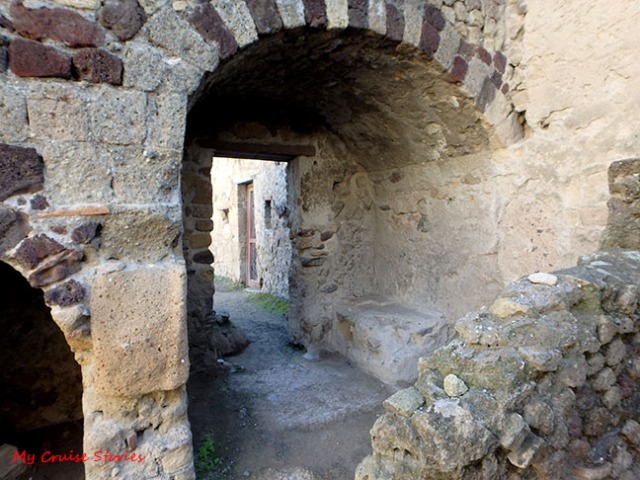 It wasn’t what I expected as it is definitely ruins and not a town looking as it did when people lived there. In fact some buildings were damaged before the volcano, having not been repaired from an earthquake 16 years earlier. It’s down in a hole because the entire village was buried in mud 10 to 20 meters thick in the initial blast. Another eruption in 1631 buried it further. 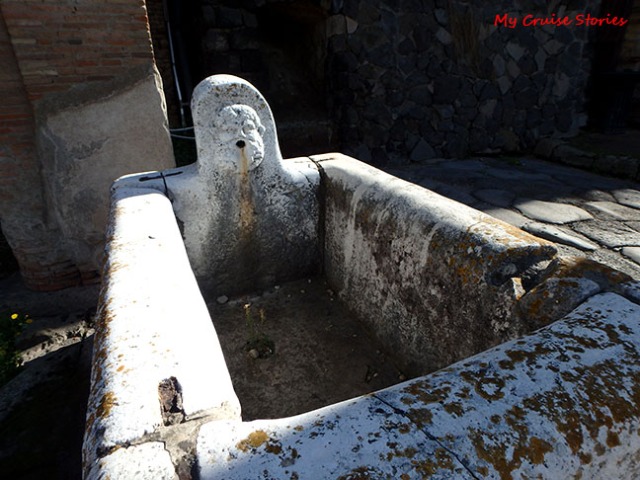 these tub-like fixtures along the streets could have been horse troughs or where people got their water.

Though not entirely forgotten having been mentioned in writings of 1504, Herculaneum remained undiscovered until 1709 when an Austrian prince found a portion of the theater while digging a well. (Odds are it was not the prince himself doing the digging.) For nearly a decade marble and statues were stripped from the theater. Later excavations tunneled through portions of the city, but it wasn’t until the 1920’s that open air excavations began. Some of the town remains underground with buildings in the current city of Resina built on top of it. The theater remains buried and is not in the part of town that tourists see.

there were a lot of basins like this around the town

Although Herculaneum was a Roman town at the time it was buried, it was initially Greek and in between was ruled by first the Samnites and then the Campanians (neither of which most people have likely ever heard of.) While Pompeii was a bustling city, Herculaneum was mainly a high-class resort area full of residences for the wealthy. It was about a third of the size of Pompeii. 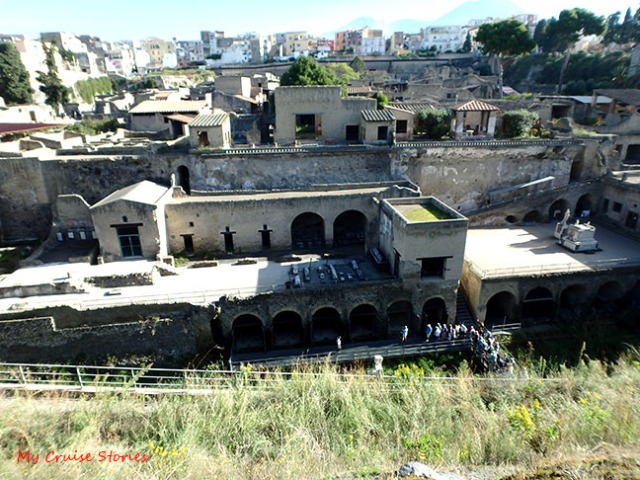 looking down on Herculaneum

The guide gathered our group at the railing overlooking partial buildings, cobblestone streets, and chambers of bones on a level lower than the street level of the houses. He droned on and on using up the limited time we had to spend there while we watched other people walking around through the ruins. As soon as he said we weren’t going down there I bailed from the group and went down on my own. John followed. We had terrible luck with the fairly useless guides we ended up with on ship’s excursions in Europe, though some other groups on the same excursions lucked out with good ones. 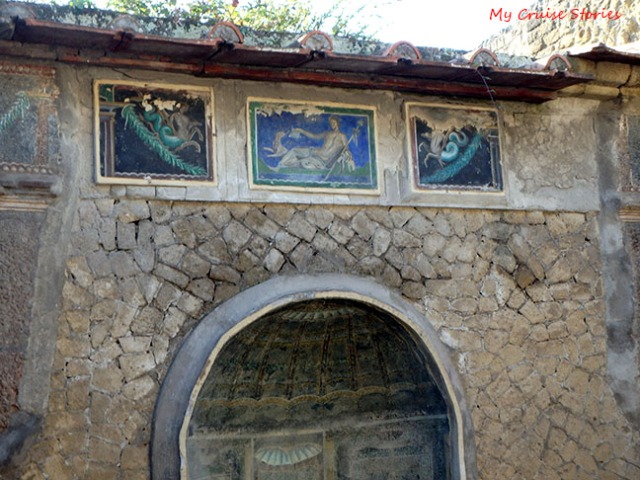 some buildings have art built into their walls

There was no way I was going to spend the whole time looking at Herculaneum from above and never venturing inside while all the other tour groups and individual visitors wandered freely through the remains of the city. Shortly after we bailed others followed and eventually the rest of the people that stayed with the guide came down too so either he meant he wasn’t taking us down as far as the bones or else he figured after half the group bailed he should take the rest in while he still had anyone left. 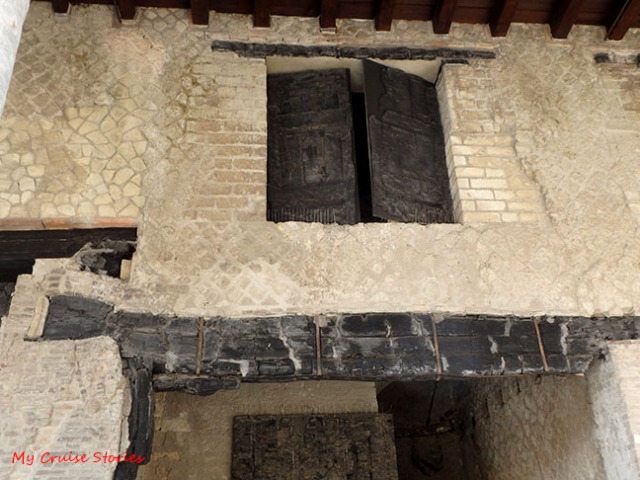 Some buildings still have a second story and there is wood preserved in parts of some structures. A few places have mosaic tile floors or paintings or carvings on the walls. All the furnishings, statues, tapestries, and other artifacts have been removed to a display at a museum in Naples so only the buildings remain other than a few very large clay pots, bread ovens, and something that looks like bathtubs. 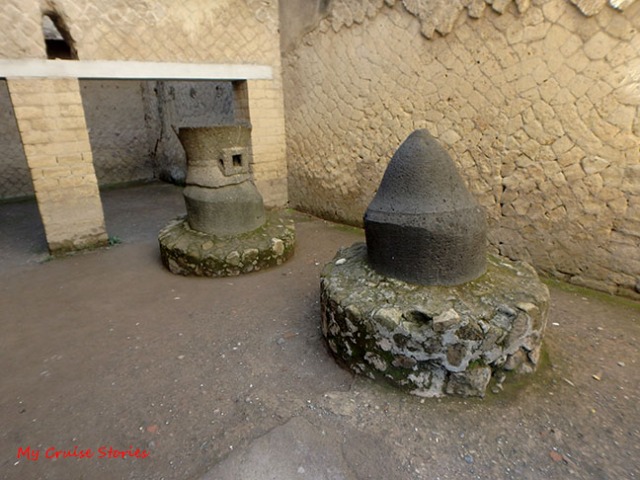 remnants of a bakery

Some buildings are in better shape than others, but none are in livable condition. Besides the residences, buildings within the area where tourists walk through include a bakery, college, gymnasium, and public baths. 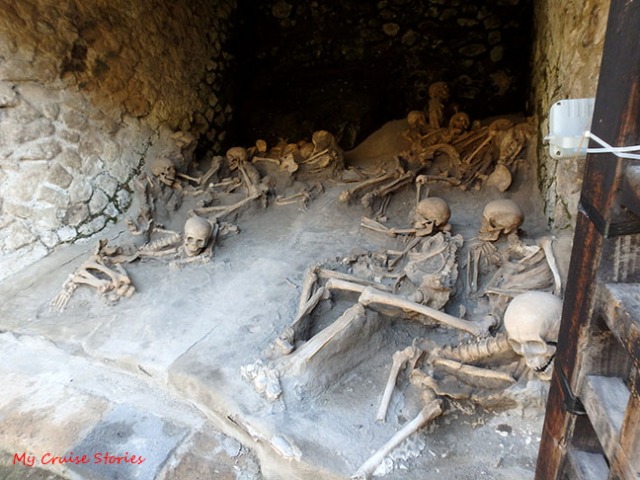 each grotto holds many skeletons

The grottos on the lower level seen from the railing above contain skeletons preserved in long-dried mud, presumably bones of people who did not make it out of town before the mudslide cascading down the mountain arrived burying everything in its path. Unlike Pompeii, some people from Herculaneum had time enough to escape to the sea, but they fared no better than those who didn’t make it out of town. A violent tsunami tossed the fleeing ships back to crash at the shore before they could reach the open sea. Remains of these boats and the people who occupied them have been found along the coast. 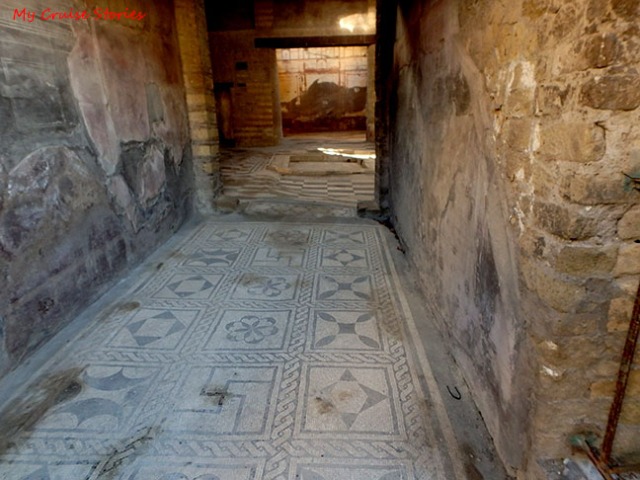 Although Herculaneum wasn’t a walk through living history, it was still an interesting place to see. It would have been nice if they had left some of the furnishings, statues, and things where they were rather than removing all of them and leaving nothing but the buildings themselves. Even one furnished house would give a better insight into the lives of people lost so long ago. 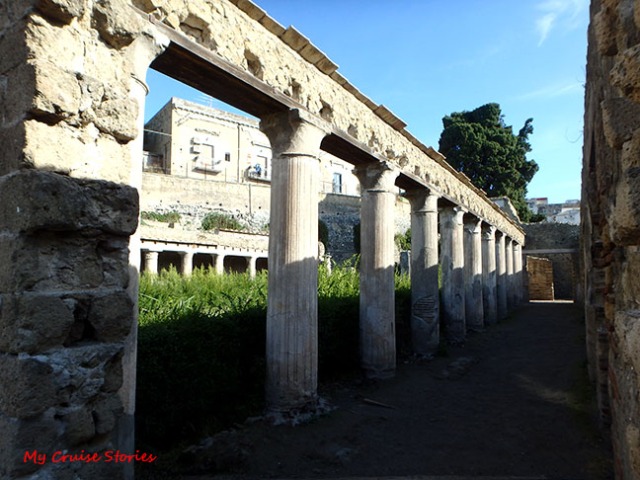 MyCruiseStories blog tells stories about adventures in cruising on ships big and small. Things to do onboard and in port. Anything connected to cruising. Also food, travel, recipes, towel animals, and the occasional random blog.
View all posts by LBcruiseshipblogger →
This entry was posted in Carnival, Europe, Ports of Call, Shore Excursions, Vista and tagged buried city, Herculaneum, history, Italy, Mount Vesuvius, Naples, photos, volcanic eruption, volcano. Bookmark the permalink.