Posted on June 30, 2017 by LBcruiseshipblogger 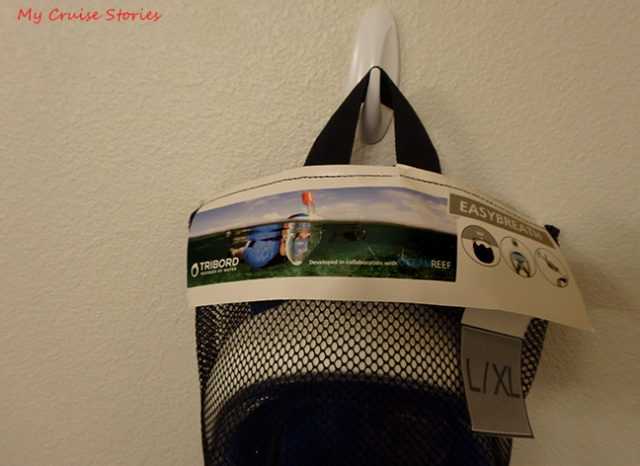 Anyone who reads my blog very often would know I’m an avid snorkeler. I snorkel any chance I get, which basically means when cruising to warm places. On snorkel excursions I’m always one of the last to come in. When shore snorkeling on my own if time is not a factor than the threat of sunburn is what eventually brings me back to shore. My husband though not so much. He always tended to stay in the water for about 5 minutes and then he’d be back on the boat or back to shore. Taking pictures of everyone else in the water used to be his excuse, but even when he didn’t bring a land only camera he never stayed out long. The real reason – he never liked traditional snorkel masks. He found them hard to breathe in and uncomfortable on his jaw.

Then suddenly things changed. Looking online for a new snorkel mask one day I came across the Tribord easy breathe full-face snorkel mask. Now there are a number of other brands, but Tribord is the original. They did all the research and invented the technology. There weren’t as many choices when I found his, and all the reviews I read then said stick with the original. It works great. The knock-offs leak, fog up, have issues with the stopper in the dry snorkel, or generally just don’t work well. So for a Christmas gift I got him the original Tribord. 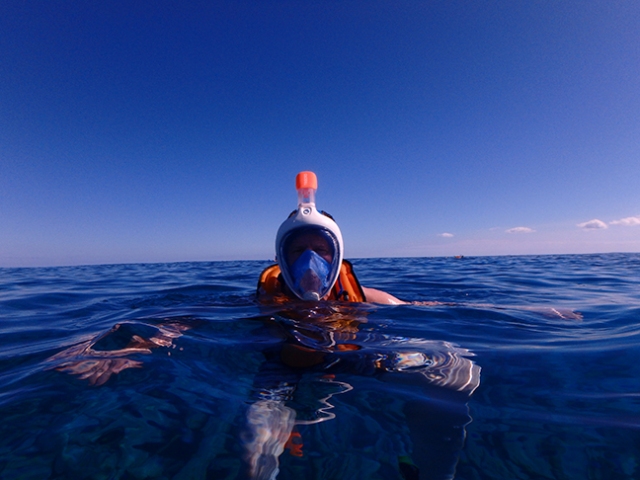 snorkeling in Bermuda, trying out the Tribord

When we finally took a cruise to a place where he could try it out he absolutely loved it. For the first time he stayed out in the water as long as I did. It worked great, fit great, and never fogged or leaked. He thinks everyone should use one, but for those of us who are fine with the regular sort that one seems a bit bulky.

Tribord above the surface

With the Tribord your whole face stays dry and there’s nothing in your mouth. You can breath through either your mouth or nose just as you do on land. It is equipped with a dry snorkel which automatically cuts off the air flow if you go under water so it stays dry and there’s no choking on seawater since none comes down the tube. It’s also a big buoyant bubble on your face so it’s harder to actually get under the surface if you like to free dive. A bonus though for staying on the surface. Then again a regular dry snorkel is also more buoyant than the old open tube style snorkel and also harder to get under the surface with, though easier to dive with if you can get there since the whole point of a dry snorkel is keeping seawater out of the snorkel tube so there’s no need to blow it out when you come up.

Tribord below the surface

On the next cruise the grandkids came along. The two boys did just fine with regular snorkel equipment, but our granddaughter had issues keeping the tube in her mouth. She spent more time stopping and trying to adjust it than she did snorkeling so she’s a good candidate for a full-face mask. Tribord does come in more sizes than the other brands, including an extra-small size for kids. Unfortunately while the other sizes all have a size range with minimum and maximum measurements from bridge of nose to chin, the extra small just says if it measures less than 10 cm (3.9″) and doesn’t give the minimum. We would have got her one for her birthday or Christmas anyway, but they cost about twice the price of the bigger ones and even those aren’t cheap.

Tribord vs a traditional snorkel mask in Grand Turk

Current reviews on the internet mention several other brands which depending on who is doing the reviewing some may work as well as the Tribord or close to it, but they all warn of poor performance from cheap knock-offs. Some reviews say that some of the better knock-offs cost more than the original without being any better so why bother with them. There are also some brands out there now with slightly different technology, which again the reviews tend to not think are any better than the Triborg other than some having a go-pro mount. One reviewer said that was great and rated Seaview higher than Triborg because of it. Another said the camera mount was up too high and put the camera out of the water unless you dive under, which the person who liked the camera mount was doing. Both said Seaview would be more likely to fog under heavy breathing. 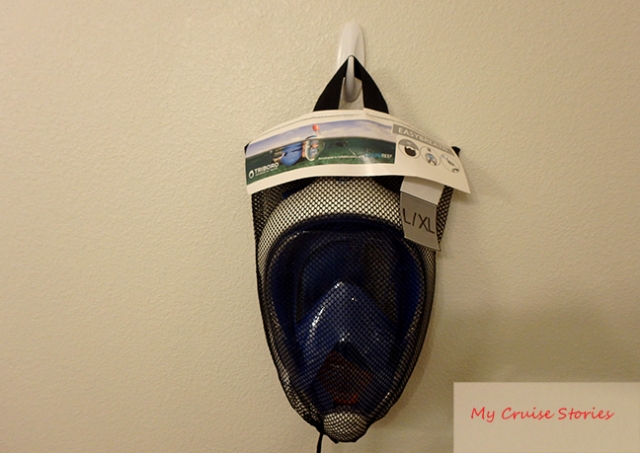 I can’t say one way or the other about other brands not having seen anything other than the Tribord anywhere other than online. I just know that having a good full-face mask that stays clear and dry opens up the world of snorkeling to anyone who has difficulty with traditional snorkel gear.