Posted on January 13, 2017 by LBcruiseshipblogger

Find a window seat when sailing into or out of Cartagena, Columbia because the ship sails past some fantastic scenery including ancient forts. Celebrity Infinity visited Cartagena as the last port on a 17 day Panama Canal cruise. The ship docks in an industrial area of container ports. At first glance it looks as if there’s not much there, but following the path along the water’s edge toward the exit brings passengers into a jungle area where pink flamingos greet their arrival. Wooden walkways wind through the jungle, which holds all sorts of delightful things awaiting discovery. There is a shop and restaurant there, and a sign that says they have wifi, though it was not working on the day of our visit.

Along the paths little monkeys run playfully through the trees and bigger howler monkeys sometimes emit quite a racket. Macaws and parrots perch in plain sight and a little animal resembling a tiny deer or antelope ran around licking the salt off people’s sweaty legs. 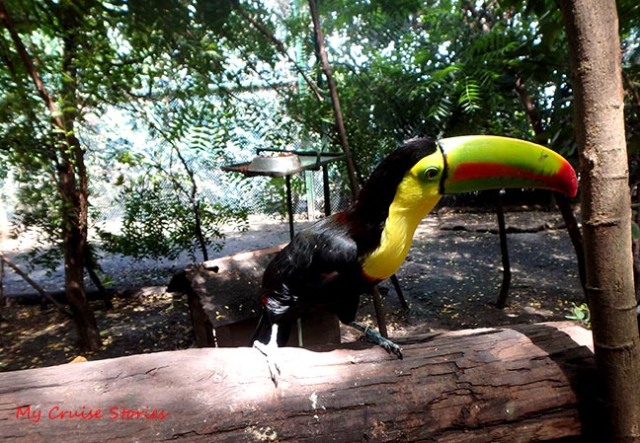 toucan in the aviary at Cartagena

A walk-through aviary held a very colorful vulture as well as toucans and other birds. One cage held a small monkey who occasionally came out of its little monkey house to run around. Anyone who didn’t want to go anywhere at this port could stay quite entertained wandering through the jungle looking at the birds and animals.

Looking from the old part of Cartagena to the new

Somewhere in the jungle maze signs point to the exit as well as the way back to the ship.  At the exit locals gather passengers without prior plans for van tours at $20 per person, and a taxi stand provides a way into town for those who want to explore on their own. Cartagena has an old part of town, a walled city from ancient times with a fort and lots of beautiful old buildings. It also has a new part of town filled with tall skyscrapers and modern buildings. A taxi ride into old town costs $20 for the cab regardless of the amount of passengers, and private taxi tours for two are available for $60 per person.

parrot in the aviary at the port in Cartagena

We went with the $20 van tour. They had about 3 people waiting and initially said they needed two more after us, but when they got the 2 more they said they still needed 3. When three more joined and they still weren’t ready to leave people got restless and ready to abandon their tour so they said they would go, but really just loaded everyone into a van and then disappeared for quite some time and came back with a couple that spoke only Spanish. Everyone else in the van spoke English other than the driver who spoke only Spanish and the bilingual tour guide.

Finally the van left for old town. The tour guide now had to repeat everything she said in English again in Spanish for the last guests. Our first stop was in front of the old fort for a photo op of the outside. People can go inside the fort for $10, something those who took a cab to town on their own might choose to do. 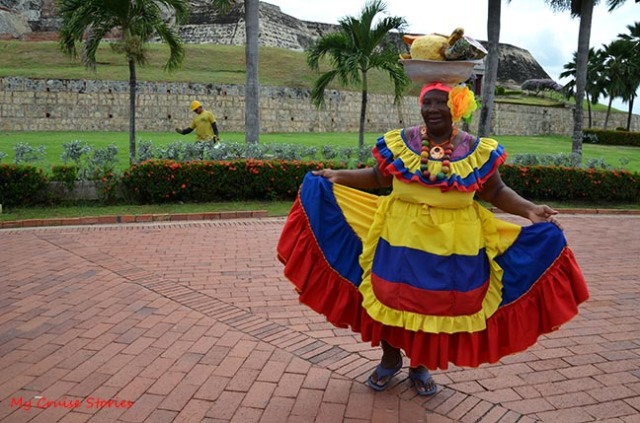 As soon as we got out of the van we were mobbed by peddlers selling all manner of things including hats, jewelry, and t-shirts. They did not like to take no for an answer. Even after people got back in the van peddlers would walk around it banging on the windows trying to get people to buy something. Women dressed in bright colors with real fruit hats posed for pictures for $1. At some stops what initially appeared to be statues turned out to be live people, who also wanted a dollar from anyone who took their photo.

We stopped at a place that during the course of history had been used as everything from a barracks for soldiers to a dungeon for prisoners, but now housed little shops selling trinkets to tourists. Outside the shops people set up little stands to sell more things. A step above street peddlers, but selling the same sort of stuff. At least these could not follow us too far as they didn’t want to leave their wares unattended.

this city square had a row of metal sculptures

At one stop we got out of the van and took a 45-minute walk through the narrow streets of the old city. Many of the buildings had beautiful old Spanish style architecture. Our tour guide pointed out things like the building where the inquisitions took place in a dark time of their history. The Spanish lady had a habit of getting in front of everyone and did her best not to let anyone get around her for long enough to get even one picture without her in it so getting decent photos was a bit of a challenge. Her husband took several photos of human statues and refused to pay them even though our guide had made it clear at the start of the journey that payment was expected for photographing the buskers. 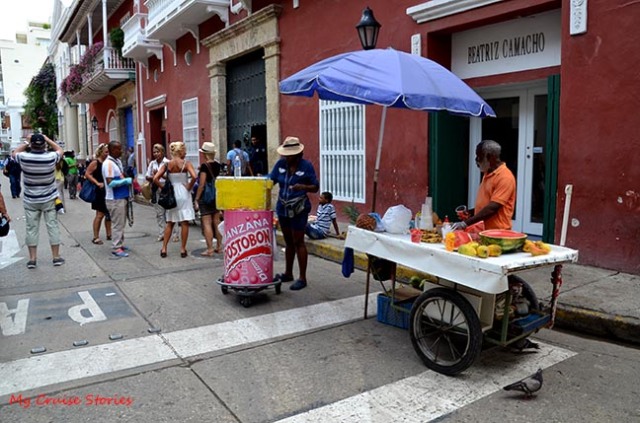 Peddlers pushed food carts up and down the streets selling fruit, drinks, or even cooked food. One parked his cart in front of us at a corner and whatever he had cooking smelled very good, but we had warning from the ship to be careful what if anything we might eat in town to avoid getting sick. The ever-present peddlers selling their wares now included people with cigars, which from the smell walking through town it was apparent some people bought. Columbia must not have any anti-public smoking laws. The smoke from all those cigars permeated the air enough to make me feel ill before we finished our walk through town so in spite of the beauty of the area I would never want to spend much time there.

Sweaty people happily returned to the air-conditioned van after the walk through town in the heat. The van was parked in a lot on a busy road where the exhaust fumes aggravated my pounding headache, chest constriction, and breathing issues brought on by cigar smoke and a tobacco allergy so I was quite happy when the van moved on to cleaner air at the next stop. 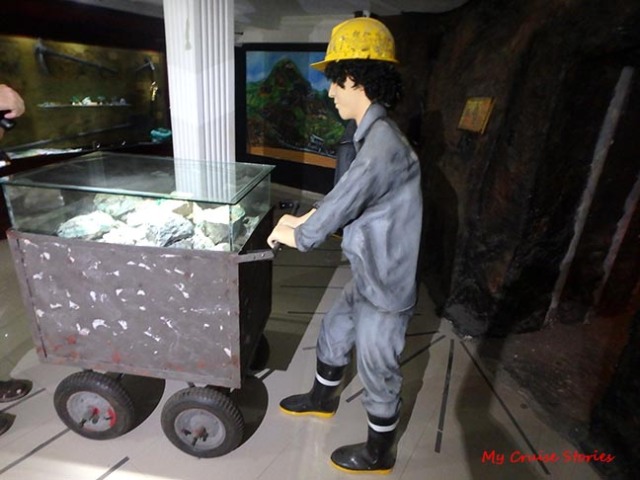 fake miner outside the fake mine

Columbia’s claim to fame is the quality of the emeralds mined there. Our last stop was at an emerald museum/jewelry store. The first room we entered in had several men at work crafting metal into settings for fine jewelry. All Columbian they said, for silver and gold are also mined there. The museum part had quite a few displays of raw emeralds and some jewelry from ancient times. It also had a walk-through model of a portion of an emerald mine. 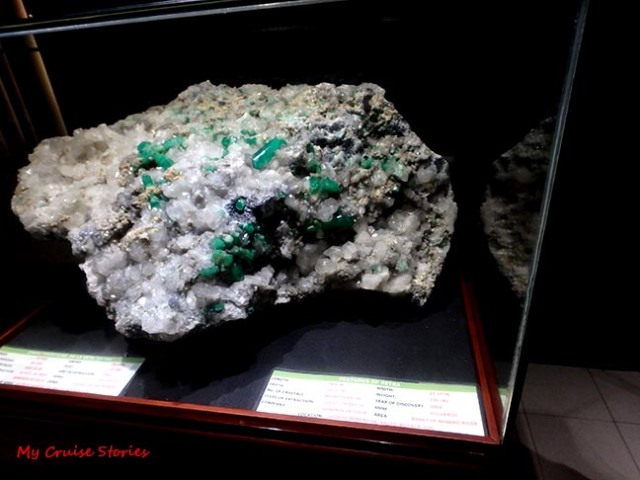 emeralds in the mine exhibit

The museum part was pretty interesting, after which of course we were sent into the store area. They did have some pretty things, but also pretty expensive. People looked around a bit and then made their way back to the van, all except the Spanish lady who stayed in the shop until nearly the time they had said the tour would return to port before the guide finally wrangled her out of there so we could leave. After all that time she did not even come out of the store carrying a bag, though one of the other ladies managed to purchase something and still get back to the van on time. Meanwhile street peddlers walked around the van banging on the windows trying to get people inside to buy stuff, but nobody did.

We made it back about half an hour after they had said we would, but still with enough time to wander through the jungle paths and look at the animals a bit before going back to the ship.