Food on the Ruby Princess

Posted on January 6, 2017 by LBcruiseshipblogger

Like all the big cruise ships, Ruby Princess has food in abundance and a variety of places to get it, with the two main places in the dining rooms or buffet. Ruby Princess has 3 dining rooms. Bottticelli serves first and second seating at dinner, Michealangelo is open throughout the dinner hours for anytime dining, and Da Vinci serves breakfast, lunch, afternoon tea, first dinner seating, and then is open for anytime dining during the later dinner hours.

one night’s menu from the dining room

The main buffet on the Lido deck is called Horizon Court and is open for all meals. It has identical stations on the port and starboard sides of the ship. Both are open during the busiest hours and just one during slower times. There is a third station at the stern called Cafe Caribe which is sometimes open during the same time as the others and sometimes at different times. When it is open at the same time it has different food. Cafe Caribe occasionally has specialty items like crab shack or chocolate buffet.

Salty Dog Gastropub, one of the premium restaurants

Passengers can also find food out by one of the pools with places that serve pizza, ice cream, and burgers. Premium restaurants include Salty Dog Gastropub, Crown Grill which serves steak and seafood, SHARE by Curtis Stone, and Vines wine and seafood bar. There’s also a 24 hour cafe where the food is free, but the drinks cost extra. Room service is available as well.

There’s something for everyone, including people on restricted diets. People with food issues such as gluten free order their next night’s dinner a day ahead so the food can be altered to suit their needs. For that reason it is best to choose a set dining time rather than anytime dining so that you have the same waiter each day. We had not thought of that since I normally cruise with my husband rather than my gluten free sisters and chose anytime dining so the headwaiter at Da Vinci made special arrangements for us with the same dining time and waiter every day.

We didn’t try any of the premium restaurants, but the food in the dining room was excellent. While my sisters got to choose their dinner courses, their dessert was whatever the waiter brought them each night. The Lido buffet always had a gluten free dessert option so they enjoyed having that as a late night snack since they got to try an extra thing each day and said the gluten free desserts up there were very good.

At afternoon tea they serve little sandwiches, cakes, cookies, and scones. We went there one day with my sisters thinking they would just pick the fillings out of the sandwiches, but the head waiter saw them and sent down to the kitchen for something gluten free. Even on the fly with no warning they had gluten free scones and macaroons. 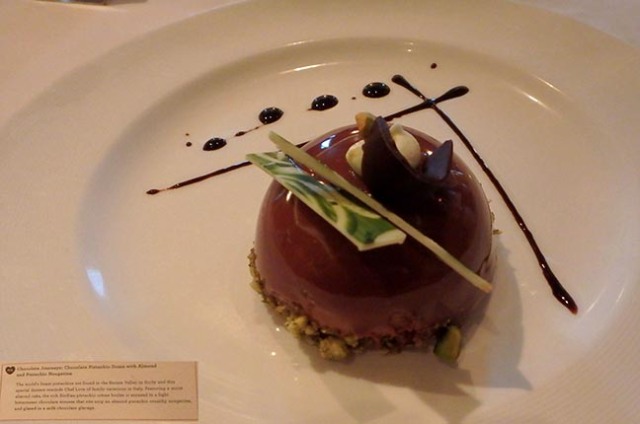 Ruby Princess had special chocolate desserts each night and sometimes chocolate treats at other events as part of their Chocolate Journeys program.

MyCruiseStories blog tells stories about adventures in cruising on ships big and small. Things to do onboard and in port. Anything connected to cruising. Also food, travel, recipes, towel animals, and the occasional random blog.
View all posts by LBcruiseshipblogger →
This entry was posted in Cruise Food, Princess, Ruby Princess and tagged cruise food, cruise ship food, photos, Princess cruise, Princess menu, travel. Bookmark the permalink.