Posted on January 15, 2016 by LBcruiseshipblogger

Before our Australian cruise on the Carnival Legend our daughter, Sheri, asked other Australians what is good to do in Melbourne with kids. She got a lot of recommendations for Science Works. On the map it didn’t look too far from the cruise ship port. Getting off the boat we stopped by the information desk. They had brochures with suggestions for places to go that passengers could get to on their own, none of which included Science Works. The map showed a free tram loop in the city. The free zone did not extend all the way to the port. The kind lady there showed us where to go on the maps to find Science Works and recommended buying the myki pass, which covers busses, trains and trams. After looking at the line inside the port building, which probably had over 100 people in it, she said we could avoid the que by walking to the end of the dock and out to the tram station where we would find a nearby store that sold the public transportation passes. 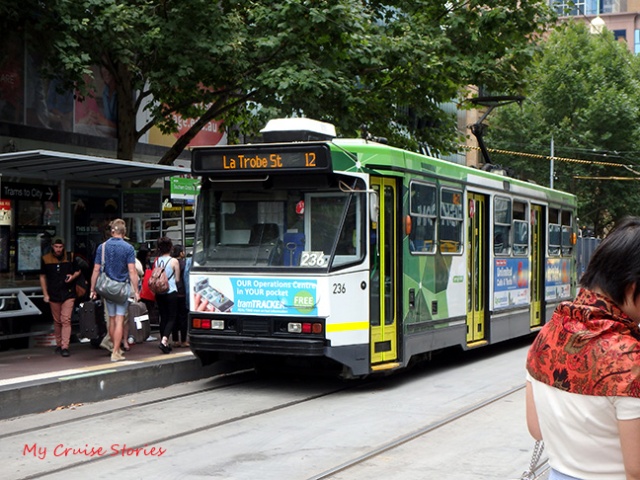 That bit of advice saved us a lot of time as there were only a few people in line at the store. With passes in hand we walked to the platform just in time to watch the waiting tram pull away. Another one quickly took its place at the end-of-the-line stop at the port. We boarded the empty tram along with a few other passengers that had not gotten steered onto busses while walking down the dock. 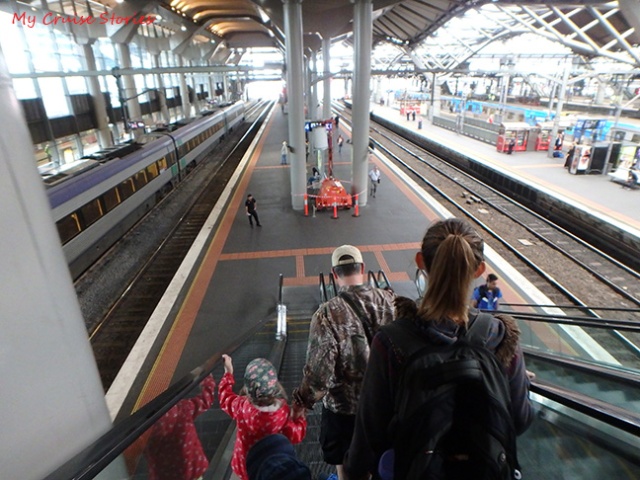 A few other people got on at stops here and there, but the tram did not get overly full as we rode it to a stop near Southern Cross Station.  From that large busy urban station we caught a train to Spotswood. Exiting the train at the tiny suburban station far from the touristy area of town, we walked through an industrial area following the signs to Science Works. 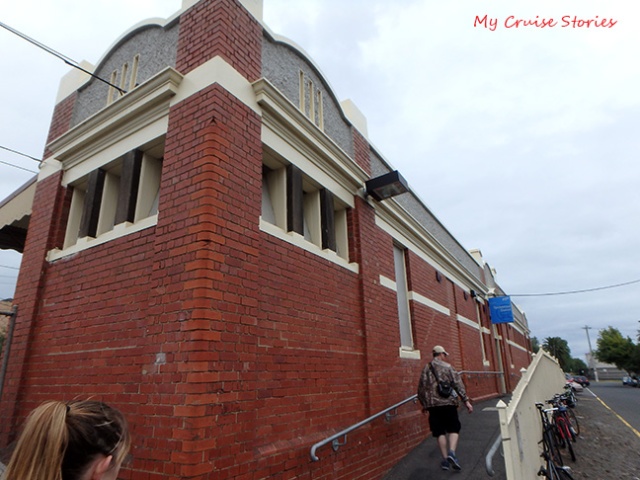 We guessed that Science Works probably wasn’t on the tourist maps because people unfamiliar with public transportation could easily get lost trying to get there. Some might feel scared or uncomfortable in the deserted train station or walking through the somewhat rundown industrial area. Other than a few people standing outside a factory on their break we did not see anyone along the way. 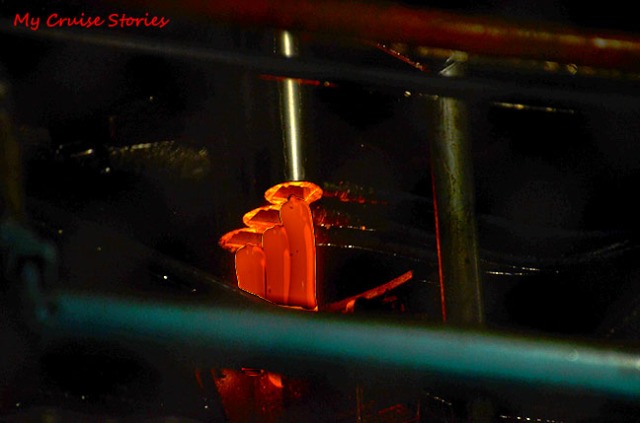 Hot molten glass bottles whizzing by on some sort of conveyer

Passing by a factory that made new bottles from recycled glass we caught a glimpse through some open window slats of orange glowing molten bottles whizzing down a chute. It looked pretty interesting so we stopped to watch for a few minutes.

The end of that street came to a crossroad with a sign pointing the way to science works. Looking in the direction the arrow pointed we saw the building itself. The base fee to get in was $12, with several extra exhibits for additional fees. We just did the regular one, which had more than enough things to entertain the grandkids until they were ready to go back to the ship for lunch. Exhibits included things like ideas for a greener planet, past and future transportation, health and fitness, and space. Many of the exhibits were interactive. The kids had quite a good time. 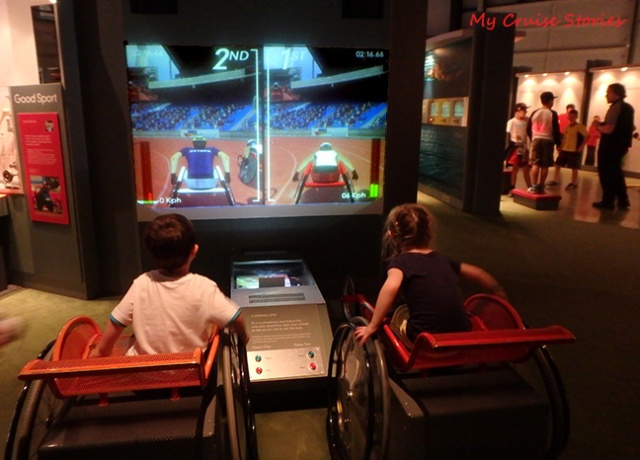 In this interactive wheelchair race exhibit the kids spin the wheels to move their onscreen racer.

Hannah tried new sports like snowboarding and rock climbing.  They also had exhibits for the mind, some about health, and some about the environment.  Some had futuristic possibilities and others items from the past whether real or imagined. 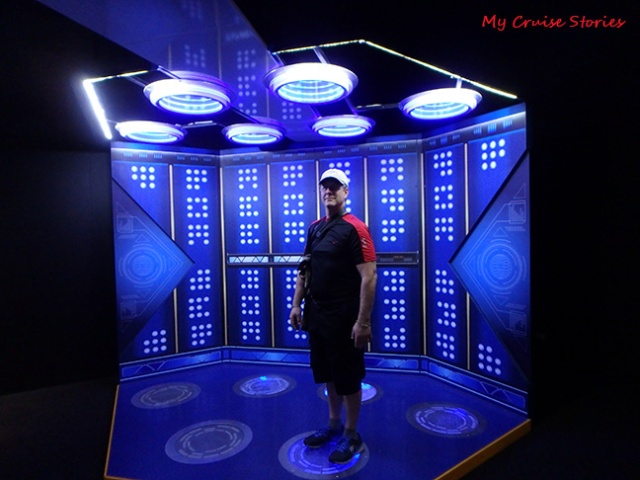 beam me up Scotty

On the walk back to the train station we wondered if the factory across the street from the glass works was abandoned or not. The building looked old and run down. It had no cars in the car park (parking lot). However industrial type noises seemed to emit from one end of the very large building, and a new looking big square green metal box that could have housed a generator or other sort of working equipment sat just outside that end of the building. Perhaps a much smaller enterprise had moved into one end of an otherwise empty building once occupied by a larger company.

We got seats on the train easily enough, but the tram back to the ship had standing room only and not much of that. A few people exited and entered at stops along the way, but the majority stayed on all the way to the port, going either to the Legend like us or to Celebrity Solstice, which someone said had come from New Zealand.

After returning to the ship we had lunch and the kids went to Camp Carnival. We went back out to explore the area near the ship. A trail for walking, jogging, or biking paralleled the beach for quite a distance. Warning signs said the beach had strong currents and uneven ground.  We saw a few people on the sand, but nobody in the water.

Not far from the ship we came across a row of bikes next to the path. For just $2.90, people can rent a bike to ride around the city. No more money accrues for half an hour. If the rider stops and returns the bike at other stations within that time they can keep checking out other bikes at no additional charge as long as each segment of the journey takes less then half an hour, with a minimum 5 minute stop before picking up the next bike. Apparently they want to make it easy for tourists to use the bikes to visit shops or the cafés Melborne is famous for.

John tries out the rental bike

The pathway, beach, and a nearby pier offered a number of places to photograph the ship.  Sheri went off for a jog, John rented a bike, and I walked out to the end of the pier.  There were two cruise ships within site and no crowd.  People passed by on the trail now and then, but not constantly.  A lady had her dog out for a walk on the beach and a few people were fishing from the pier. A one-legged seagull sat on the railing about halfway to the end of the pier.

one legged seagull on the fishing pier

Ship’s excursions are always an option in any port, but in Melbourne getting around on your own is pretty easy. I don’t think any other passengers went to Science Works like we did though.

MyCruiseStories blog tells stories about adventures in cruising on ships big and small. Things to do onboard and in port. Anything connected to cruising. Also food, travel, recipes, towel animals, and the occasional random blog.
View all posts by LBcruiseshipblogger →
This entry was posted in Australia, Carnival, Legend, Ports of Call and tagged Australia, cruising with kids, fun, kids, light rail, Melbourne, on your own in port, photos, public transportation, Science Works, trains, travel. Bookmark the permalink.

12 Responses to The Melbourne Adventure