Posted on October 30, 2015 by LBcruiseshipblogger

I first heard about Carnival’s new American Table menus on Carnival spokesman John Heald’s Facebook page, where people constantly complain about it. While taking away the white tablecloths in the cruise ship dining room and calling the menu American Table sounded more like roadside diner anywhere USA than cruise ship elegance to me, I decided to reserve judgment until after experiencing it for myself. 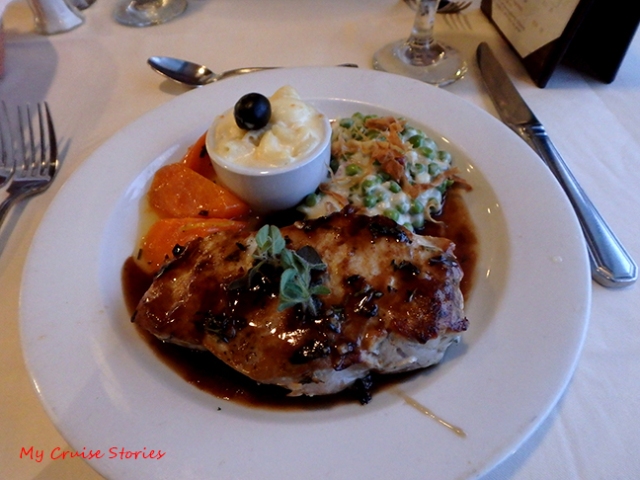 Since we had a cruise booked on the Ecstasy with the old menu followed immediately by back-to-back cruises on the Breeze featuring the new menu I had a great opportunity to compare the two.

I thought I would miss the tablecloths, but the table décor looked like upscale bistro and fit in well with the Caribbean casual décor on the Breeze.  It might not fit in so well with the over the top décor on a ship like the Splendor, but then again the way they had it set up seemed almost more elegant without the tablecloths so it might. Each table had fancy little bread plates, wine bottles with a stone on a rope around them with the table number, and a water carafe. The bread plates have different scenes on them and one day we had one with the space needle and Seattle’s Pike Place Market. They should probably add coasters under the glasses because they leave water drops on the bare tables.  Other than the wet spots we liked the new set up and it is more environmentally friendly since they just wipe the table rather than having to wash all those tablecloths every day.

On Elegant Night the Breeze has tablecloths, but no fancy folded napkins

On Elegant nights they brought out the tablecloths and had silver colored table decorations and all white dishes with the feast menu.  Changing the table decor made it stand out more as a special night since everything looked different from casual dining evenings. 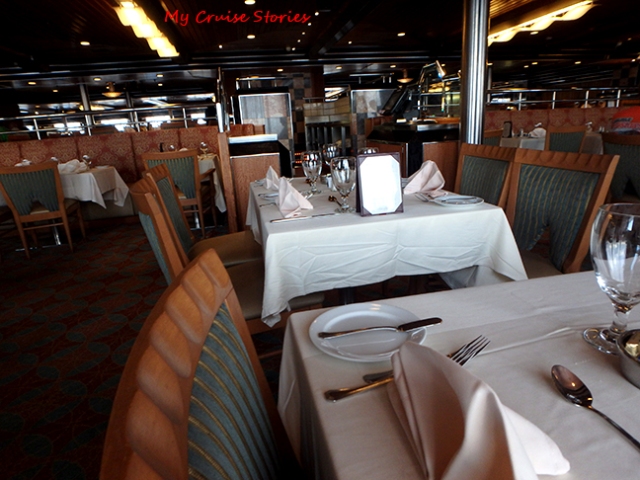 I’m not really sure why the American Table menu gets so many complaints and not much else on facebook. The biggest differences were the lack of tablecloths and the menu presentation more than the food itself, which contained some items from the original menu and a similar variety of other choices.  Overall it seemed like it had more items to choose from.  We have noticed the food quality will vary from ship to ship, but that may have more to do with the chef, galley staff, and galley equipment than it does with the menu as this went on long before any menu changes came into effect.  On this trip we liked the food on the Breeze better than what the Ecstasy served. 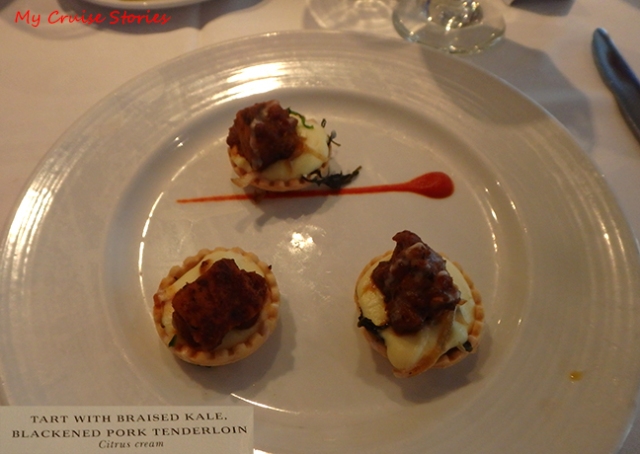 The new American Table food on the Breeze  was prepared better than what the Ecstasy with the traditional menu served even when it was the exact same menu item.  The American Table menu still has items like frog legs from the “Didja” (as in didja ever try) section, but the new menu calls it rare finds.  I’ve never ordered those items off either menu, but those who liked them might feel happy to find them still there.

Today side of traditional menu on Ecstasy

The traditional menu had two pages. One side had the every day offerings which had a list of standard American food items for appetizers and mains and the other had a different selection of both each day. The American Table menu has 3 pages, the first two with the appetizers including some that vary and some offered daily as well as mains that change daily and off the grill items that remain constant. It also has a third page with port inspired selections that change daily. Both menus contain steakhouse offerings for an extra charge. 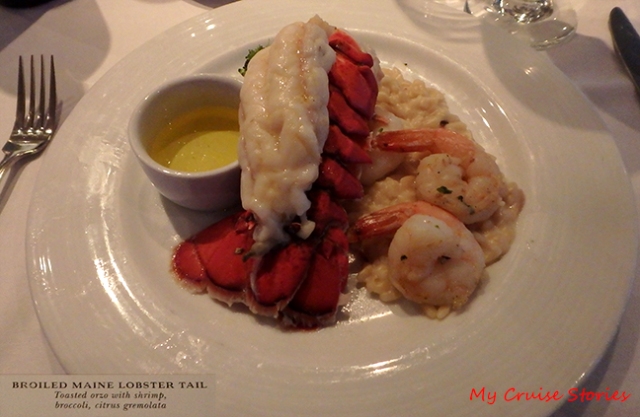 On elegant nights ships with American Table have a “feast” menu which contains items similar to what they have on elegant nights on the other ships including lobster tails on sailings over 5 days in length. 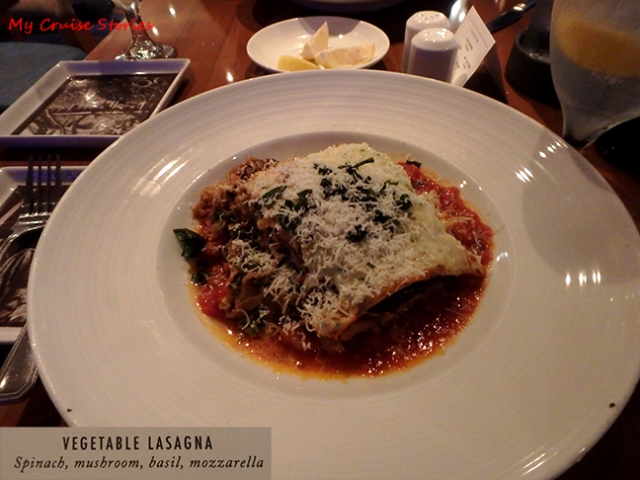 Vegetable Lasagna from the Breeze

While the items offered on the new American Table menu include some of the same things from the old menu, it also has some things new and different like the vegetable lasagna, which was one of our favorite meals of the cruise. We liked it so much we both ordered it again on the second leg of our back to back cruise.

This Eggplant and Zucchini Parmesana from the Ecstasy was good, but not as tasty as the vegetable lasagna on the Breeze

With the off the grill and port of call menus it had more total things to choose from than the old menu.  The American Table menu also had additional sides that people could order along with their regular meal if they wanted extra things. The meats still come with side dishes so it isn’t necessary to order the additional sides to make a complete meal. They are available for people who want extra or maybe who don’t like what comes with the meal. Or it could be that they are there for people who buy the steakhouse selections which I heard don’t come with sides. Having never ordered anything from the pay-extra menu I have no idea if that is true. Side dishes include potatoes, vegetables, and macaroni & cheese so someone could just order several sides and make a meal of it if they wanted to. 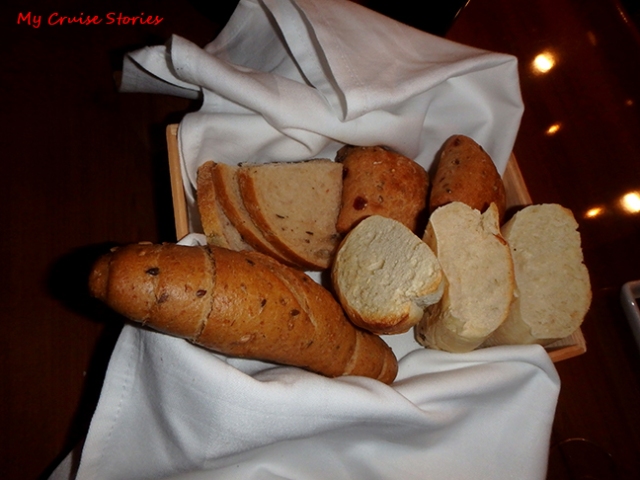 Both ships had a bread basket for each table. On the Ecstasy they just had white bread, but the Breeze had a couple other choices with a darker bread roll and some seed bread.  Seems like just offering people to choose a piece or two rather than leaving the whole basket would be a lot less wasteful. 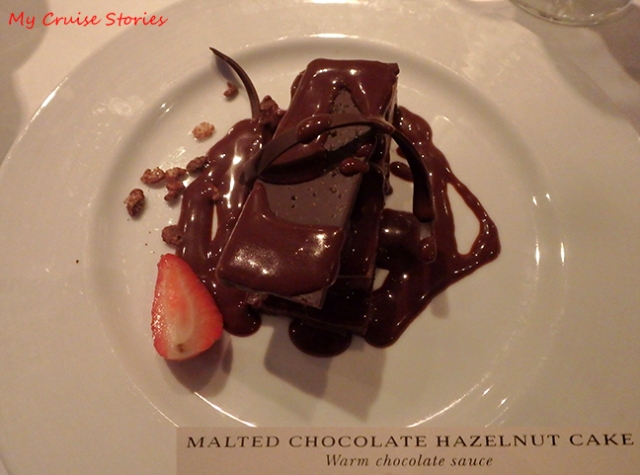 While the addition of a pie offering each night actually increased the dessert options it seemed like we had less choices of desserts we thought we would like on the American Table.  Probably because all the good things came out on the same night while other nights had nothing much that we thought sounded good. On a typical cruise we usually have the chocolate melting cake about once when nothing else sounds that appealing.  This time we both had it more than once in the same week. The melting cake is still available every night on the new menu  which also still includes the cheese plate, fruit, ice cream, and a sugar-free option.

the new menu had the old favorite Bitter & Blanc

Overall we were quite happy with the new menu and don’t know what all the fuss is about.  Perhaps they could have named it better since it does include items that are not traditionally American food like the port of call selections and a nightly Indian vegetarian dish.  A fancier title that sounds more like something served on a cruise ship and less like roadside diner fare might give people a better perception of their new menu. 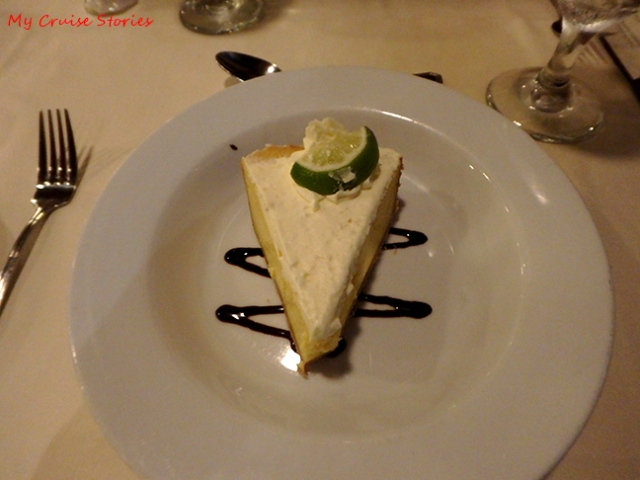 Key Lime Pie from the Ecstasy

The Ecstasy served Key Lime Pie one night as one of their regular dessert choices.  They did not have a daily pie option as an extra dessert choice like the American Table menu does.  The ship visits Key West where Key Lime Pie is a big thing so that is probably why they served it.  We liked it almost as much as the Key Lime Pie we bought at a little cafe in Key West.

MyCruiseStories blog tells stories about adventures in cruising on ships big and small. Things to do onboard and in port. Anything connected to cruising. Also food, travel, recipes, towel animals, and the occasional random blog.
View all posts by LBcruiseshipblogger →
This entry was posted in Breeze, Carnival, Cruise Food, Ecstasy and tagged American Table, Carnival, cruise food, dining room, menu change, menus. Bookmark the permalink.

4 Responses to Carnival’s New American Table vs. the Traditional Menu