Posted on March 23, 2013 by LBcruiseshipblogger 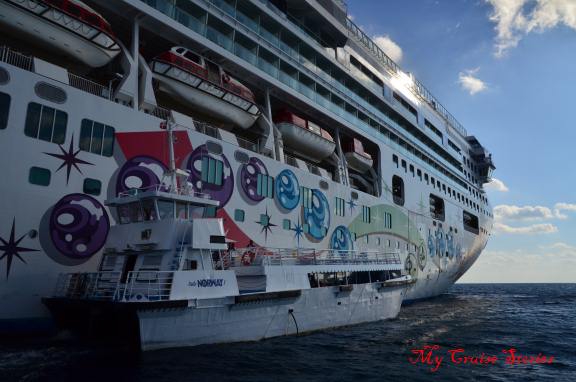 Our Caribbean cruise on the Norwegian Pearl made its first port stop at Norwegian’s private island, Great Stirrup Cay.  Shortly after breakfast, we caught a tender from the Pearl to the island.  Both from the tender on the channel in, and walking about the area we noticed that the island had a look about it of a place in transition.  Plants all appeared dead or new, and areas without them often had a newly worked on look about them. 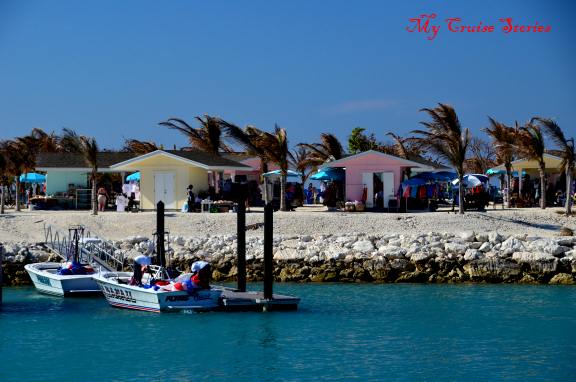 As we disembarked the tender, we headed toward the Straw Market, an area where locals from nearby islands sell their brightly colored crafts.  All the bright colors contrasted with the small pastel buildings and lack of color in the surrounding area.

Not finding anything we wanted to buy, we moved on to the beach where rows of blue beach chairs sat in the sand amidst signs proclaiming all snorkelers must wear safety vests (which, of course, they have for rent.)   We have our own snorkel gear, but vests are not among it so we had to rent them at the snorkel gear rental shack.

Warm salt water provides quite a bit of buoyancy.  I’ve always found  it harder to dive under than to stay on top even without a life vest and much prefer vest-free snorkeling even when in deep water.  At least we were not required to put air in them. 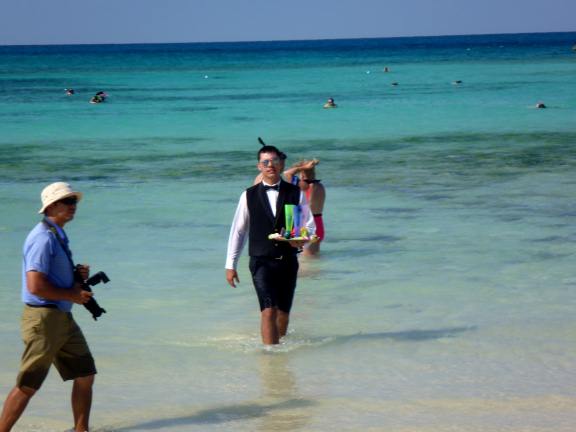 You don’t have to leave the water to order from this waiter.

Near the shore, people swam about and small children splashed and played.  Some people floated around on inflatable rafts.  We even saw a water waiter bringing drinks to people in the sea.  One group of people attempted to make a massive sand castle, but it collapsed before they finished.  Perhaps they could use some pointers from the people we saw in Barcelona.

fish in a rowboat

The area near the beach had quite a few rocky spots, but clear passage over sand to deeper water ran through the rocks in a few places.  We swam out a ways to snorkel, and as usual  John turned back long before I had any intention of it.  He always prefers taking photos of other people snorkeling to doing so himself.  I bring the underwater camera and take photos while snorkeling.

on the snorkel trail

The snorkel gear rental shack had maps of a trail of sunken objects to follow.  Not everything on the map was there though.  We stopped at that island shortly after hurricane Sandy, which had taken all the sand from the beach along with things like the stingray pen and the hippo slide.  Buoys throughout the lagoon marked the trail of things to see, quite a few of which still remained.

Whether, rocks shipwrecks, or intentionally sunken artifacts like these, any sort of structure underwater attracts fish.  This area had some pretty good sized ones, and I even saw a one of the stingrays that lived in the stingray pen before Hurricane Sandy destroyed it.

Hurricane Sandy definitely left her mark on the island.  Trees of that region can survive storms, and though at first glance they all look dead, a closer look shows new green foliage starting to emerge.  The rest of the island needed a bit more help to recover from the hurricane.  We saw all sorts of excavating equipment and one of the life guards told us that on boat-free days the island’s employees worked on restoring the island to its former glory.  They had replaced the sand on the beach when we visited, but had not yet had time to get all the boulders out of the lagoon, fix the stingray pen, or get a new slide. 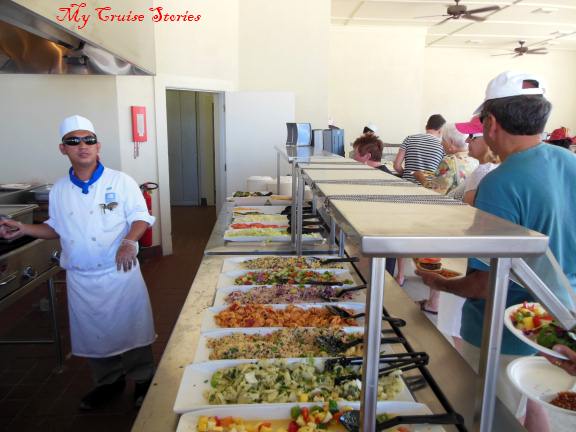 The buildings on the island survived the storm better than the beach did.  The barbeque shed was quite intact and serving up all sorts of good things for lunch.  We found too many tasty-looking items to try them all.  The other buildings seemed fine too.  The restrooms were clean and the bars open for business.

If the parasail boats had gone close enough to the ship for photos we probably would have gone parasailing as they were up and running, but since they stayed in a different area we didn’t.

Things to do on Great Stirrup Cay include a wave runner tour, a kayak tour, cabana rentals, the hippo slide, and stand-up paddle boards.  People with enough ambition can hike to a lighthouse built in 1863.  In the past people manned the lighthouse, but it is automatic now.

Other remnants of Great Stirrup Cay’s past people might come across hiking around the island include concrete blocks from the island’s time as a military outpost, or old buildings from a plantation once there.  Pirates used the island for a hideout during the Caribbean’s pirate era.  Norwegian acquired the North end of the island in 1977 from the Belcher Oil Company.  It became the very first private island for cruise ship stops.

MyCruiseStories blog tells stories about adventures in cruising on ships big and small. Things to do onboard and in port. Anything connected to cruising. Also food, travel, recipes, towel animals, and the occasional random blog.
View all posts by LBcruiseshipblogger →
This entry was posted in Caribbean, Norwegian, Pearl, Ports of Call and tagged Carribean, cruise, island, Norwefian, Pearl, pictures, snorkel, travel. Bookmark the permalink.