A Saddle Goes to Sea

Posted on June 4, 2011 by LBcruiseshipblogger 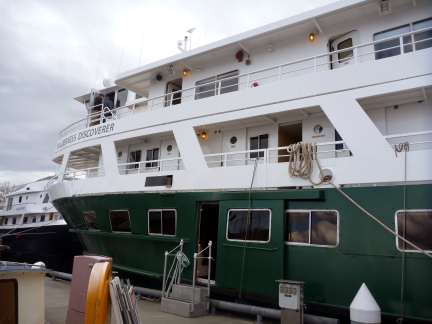 “You can have one if you pay for it yourself.”

So my mother said many years ago when asked if I could have a horse.  Much later I found out that really meant no, as she thought that would never happen.  Never underestimate the determination of teens or tweens. 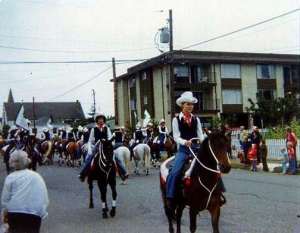 Tabu wears the saddle in 4th of July parade

I saved almost everything I got from babysitting, a paper route, allowance and gifts.  I even tried to get a real job, but nobody would hire anyone under 16.  Finally I saved up enough money to buy a horse.  Not knowing anything about them, my parents allowed me to buy a 6-year-old unbroke gelding named Tabu who had been a stallion up to age 5.  I chose him because I thought he was pretty.

I soon found out you can’t ride pretty.  With the determination and blind luck of a child, lots of time and patience, and some outside advice good and bad, eventually Tabu became rideable.  Mostly in those days I rode bareback.  Once in awhile though, I took him to a 4-H show, and for that I really needed a saddle.  Part Arab and part Welsh, at 13.2 hands, by today’s standards he would definitely be a pony.  Back then though, at least where I lived, most of the horses were around 14 hands.   A 15-hand horse, considered a small one now, looked quite tall then.

Horse saddles seemed too big and pony saddles too small.  Nothing really seemed 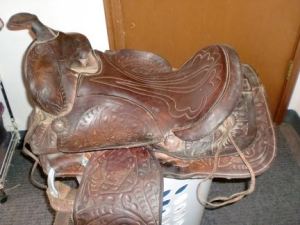 Time passed, we grew up and moved on with our lives and lost contact with one another.  She had never asked for the saddle back, or had any reason to want it before we graduated and moved on.  I have since lent out a saddle and a pony cart, which also became perma-borrowed.  After a time I no longer even had any ponies that would fit them and never really wanted them back. I haven’t asked and they haven’t offered, so from the other side of things I can understand that odds are Anne never really wanted her saddle back either.

I got married, moved to the country, and bought a stallion named Gems Midnight Oil.  In spite of his chestnut color, he had always been called Midnight, the time of day he was born.  I got him as an unbroke 2-year-old.  He was so gentle we had a cat that used to jump from the stall wall onto his back and ride him around before any people ever rode him.  Cats do some strange things.

Once trained, he was gentle enough that I could put the good old western saddle on him and ride double with my small children.  After my son started kindergarten, I would ride to the pre-school a couple miles down the road with my daughter, and drop her off there.  I could take a ride on the trail a short distance away, then pick her up on the way back home.

The down side to a stallion is the need to promote him to get customers for breeding.  Before owning him I had only gone to horse shows occasionally for fun.  After showing him nearly every weekend during show season for several years, I never wanted to see the inside of a show ring again, and haven’t shown a horse since unless you count the just-for-fun parent/leader classes at the fair, which I did some during my years as a 4-H horse club leader while my kids grew up. 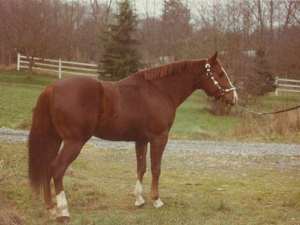 Midnight’s best moment in a show came in a class where he didn’t even get a ribbon.  A mare in heat stopped right in front of him, lifted her tail and did what mares do.  Unable to go around because of another horse and rider in the way, I had to stop too.  By the time the judge looked over, the mare had got going and he saw only me stopped for no apparent reason.  But the fact that no impromptu breeding happened in the middle of that show ring was worth more to me than any blue ribbon ever could be.

Another time, we got lost on the way to a show at an arena where we had never gone before.  We got there just in time to unload, saddle up, and ride straight into my first class.  No warm-up time at all after quite a long trailer ride.  Midnight and I won first place in that class.

Eventually his foals began to mature enough to realize they were nothing special.  With quarter horse stallions pretty much a dime a dozen in our area, there really didn’t seem to be a whole lot of reason to raise a bunch of mediocre horses.  So we decided to get him gelded.  Normally horses will calm down and become much easier to handle after gelding them.  Since Midnight was already calm and easy to handle, we didn’t really expect it to change him.

A horse who had never bucked as a stallion suddenly became a bucking bronco after getting gelded.  They need exercise when freshly gelded to keep drainage moving and swelling down.  Normally the horses are younger and this is done on a lunge line, but as he was older and already rideable he could go under saddle.  One day I had just started off on a ride for his daily exercise.  We had just gone around the corner when he decided to throw a major bucking fit in the middle of the road.  So far he had not managed to throw me, but when he bucked so hard the saddle cracked we parted company.  Considering this happened on a paved road, I felt quite lucky to land on my feet, reins in hand.

I couldn’t ride in that saddle any more, but just didn’t feel right about throwing it out since I never officially owned it.  Not that I could have found Anne to give it back, or her me to ask for it since so many years had passed since we last had contact with one another.  Not likely she would want a broken saddle anyway.  For lack of anything better to do with it, it ended up in the hay loft.  There it sat for over 20 years gathering dust and cobwebs.  Amazingly enough it never molded, which must say something about the quality of leather used back when people took pride in their work and made things to last.  Newer things mold when ignored in the tack room for a few months. 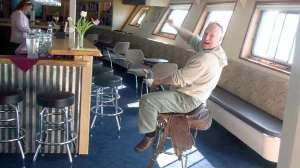 group of media people bound for Alaska to test the new InnerSea Discoveries itinerary.  As we toured through the ship, Captain Dan Blanchard enthusiastically told us of his renovation plans.  When we got to the bar area he mentioned a desire to decorate it in early forest service lodge mode.  Then he said if anyone had any old outdoorsy items they would like to donate he’d be happy to accept.  No doubt he meant things like antlers or old fishing lures.  But my mind drifted to that dusty old saddle sitting up there in my hay loft.

At some point in the tour I got the chance to ask if he would like the saddle.  He said yes, mentioning that he might possibly turn it into a lamp.  Several months later I checked to see if he still wanted it and to make arrangements for delivery.  Given time to consider it, only his prospective use for it had changed.  He had decided to turn it into a bar stool.  I dragged it down from the hay loft and gave it a good cleaning before bringing it to the InnerSea Discoveries/American Safari Cruises office in Seattle.

The next spring I went to the ship’s christening ceremony.  I had hoped to get some pictures of the saddle-turned-barstool while I was there, but they had not figured out how to mount the saddle to the stool yet at that time.  Shortly after they got it done, but as the ship had set sail for Alaska, I did not get a chance to take any photos.

That is how a broken old saddle got rescued from years of uselessness and gained a new life as a bar stool on the Wilderness Discoverer.  Now it rides the waves instead of the trails.  If it could talk it would probably say how happy it felt to be the center of attention after decades of nothing but spiders caring whether it existed or not. 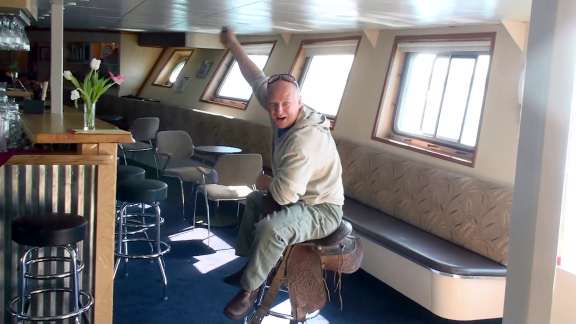 6 Responses to A Saddle Goes to Sea