Posted on April 28, 2011 by LBcruiseshipblogger 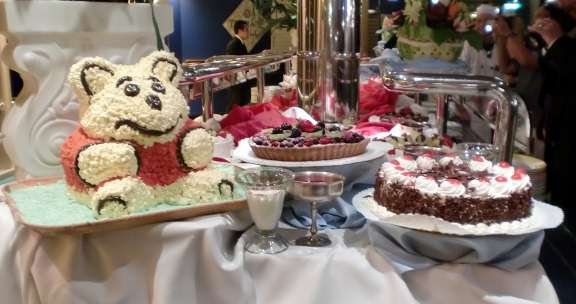 All the major cruise lines I’ve sailed with have a late-night buffet.  What they serve, or how many people attend most nights, I have no clue.  One night out of each cruise though, they always have a dessert buffet.  That one multitudes of people attend.  Why wouldn’t they? Rows and rows of tables covered in cakes, pies, cookies, and all manner of tasty sweet treats.  All those pounds people put on on a cruise?  Yeah, this one event alone could probably double it.  Well for people who don’t exercise control at any rate.

On the Holland America Westerdam, they opened the doors to the buffet a bit early for photography.  A far smaller crowd than the one soon to descend on the food like a flock of hungry vultures burst through the door armed with as many different kinds of cameras as there were people.  All with just one goal in mind, that perfect picture representing the wonderfully tasty and beautifully displayed bounty of deliciousness.

What to photograph first?  The flowing milk fountain, numerous ice sculptures, or

the creative arrays of the desserts themselves?  I found a deserted place to start snapping shots of the goodies and worked my way around the room from there.  I’m not an assertive photographer, so I work much better away from the crowd.

When photography time ended and the crew released hungry hordes upon the waiting treats, we found ourselves in the perfect position to slide right into the front of the line.  First crack at all that wonderful stuff.  What to eat?  Decisions, decisions, it all looked so good.  We didn’t make it past the first table before we had more dessert than we needed on our plates and went to find a place to sit down and eat it.

all you can eat and then some

read it or eat it?