Posted on April 22, 2011 by LBcruiseshipblogger

Parasailing at Half Moon Cay

We reported at the assigned meeting place for our parasailing adventure on Holland America‘s private island, Half Moon Cay, at the scheduled time.  Just the two of us and one other guy.  We waited in the sun for a bit, sometimes seeking shade in a nearby planter.  Finally someone from the boat crew showed up.  We walked down to the dock, and there, attached to the back of the boat, sat the pale yellow and white sail.

“They guaranteed us the bright yellow and red sail at this time slot,” John said.  “I scheduled this excursion for the pictures I can take, that one just won’t do.”

Turned out the boat with the red sail was already out with other people.  Luckily the other guy was very patient.  He didn’t care what color sail we had, he just wanted to parasail.  And he wasn’t in too big of a hurry to mind them catering to our whims.

The boat crew were all fantastic.  The rest of the island workers should take lessons on customer relations from them.  They decided to take us out on that boat, and meet the other one on its way back so we could transfer to the one we wanted.  It made it to shore before that happened so we turned back and changed boats at the dock.  All the while the crew smiled.  Whatever they may have actually felt, they acted like they wanted nothing more than to make us happy.

We had the last parasail excursion for the day, so the crew had no need to hurry 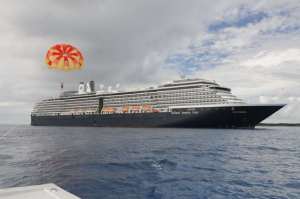 landing on the ship?

back for another group.  They asked who wanted to go first.  We both looked at the other guy and he happily strapped on the parasail gear.  We watched him have his go, and snapped a few photos.

Next John went up.  I had my camera, he had his.  He took aerial shots, I took shots of the parasail, the crew operating it, whatever looked photo-worthy.

Then my turn came.  I had parasailed once before, in Cabo San Lucus on a poker cruise to Mexico.  They also had the boats like the ones at Half Moon Cay where the crew sends you up and winches you down from the back of the boat.  You never have to get wet or try and land on the water like the old style boats some other places have.

Half Moon Cay from above

I brought my trusty lumix underwater/shock proof camera up and had a great time getting a variety of aerial shots.  Sometimes I even remembered to put the camera down and just enjoy the ride for a few minutes.  John said he never did that on his turn.  But his idea of fun on any excursion is more to take pictures of other people enjoying themselves than to have any fun of his own.

Meanwhile, unbeknownst to me, the boat crew worked willingly with John, placing me where he wanted for his photos.  I got some great close-ups of the Westerdam while he had them making it look as if I would land on it for his photos.  They brought me down to where my feet nearly touched the water behind the boat, and then sent me back up again.  Something not normally included in that ride, but again 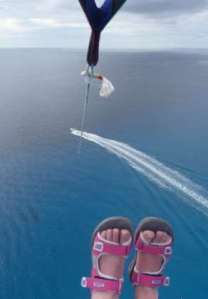 they worked with him on whatever he wanted for a picture.  No objections from me, I got an extra long ride!

We loved the parasailing.  It saved the day for us at Half Moon Cay.  None of our other plans there had worked out the way we wanted.  After the parasail adventure, we left with a good feeling about the island instead of the letdown we felt after the horses didn’t swim and the snorkel gear rental didn’t go well either.  I would definitely recommend parasailing for anyone who visits Half Moon Cay, unless they are afraid of heights.

When our parasail trip ended, we caught the next tender back to the Westerdam.  We joined the never-leave-the-ship folks for some uncrowded time on board.  Having skipped lunch, we enjoyed some veggie burgers for “linner” at the Lido Grill.  It stays open at odd hours when most other restaurants on board close.

MyCruiseStories blog tells stories about adventures in cruising on ships big and small. Things to do onboard and in port. Anything connected to cruising. Also food, travel, recipes, towel animals, and the occasional random blog.
View all posts by LBcruiseshipblogger →
This entry was posted in Caribbean, Holland America, Shore Excursions, Westerdam and tagged adventure, Caribbean cruise, fun, Half Moon Cay, Holland America, parasail, travel. Bookmark the permalink.

3 Responses to Parasailing Saves the Day