Posted on September 23, 2022 by LBcruiseshipblogger 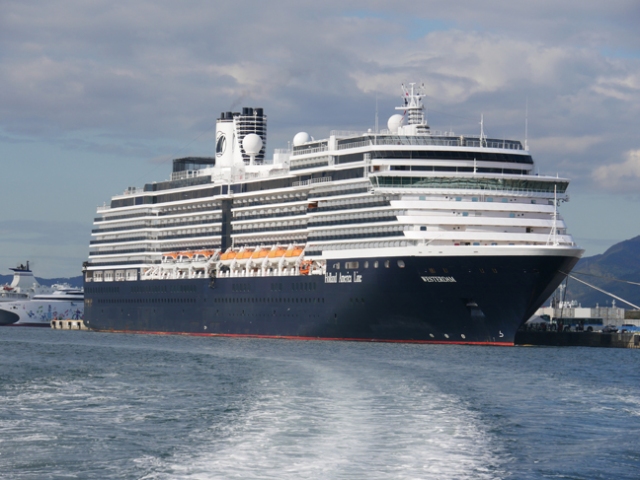 Every cruise and every ship has its high points and low points. There are always some things you really love and some things you could do without. Of course which things are hits and which are misses depend entirely on each person’s individual tastes. One person’s absolute favorite thing may be the thing someone else hates most. So it’s a good thing cruise ships have all sorts of options. These are entirely my opinions of the things I liked and didn’t particularly care for on our Vancouver to Shanghai cruise on Holland America Westerdam. 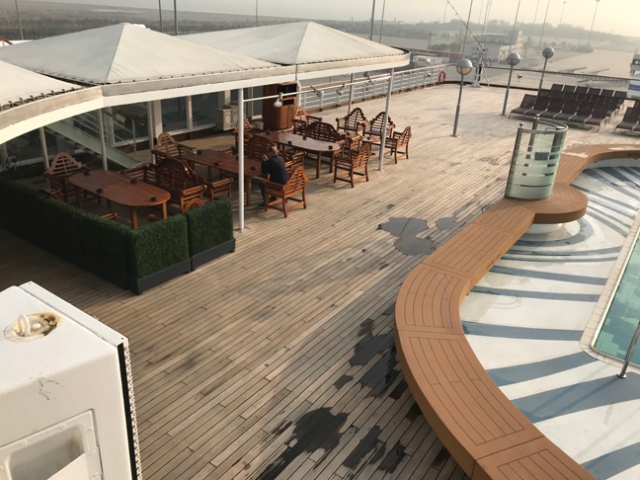 smoking shelter on the back deck

One of my absolute favorite things about the Westerdam was their new smoking rules. On previous trips they had a smoking side on the promenade deck, which is not good for anyone trying to get some exercise walking or jogging around it. I was quite happy to see that the Westerdam has joined her sister ship, the Oosterdam, in having the only smoking area onboard outside at the back of the lido deck. It’s not where you have to walk through it to get anywhere else, and being at the back the ship sails out of the smoke when in motion. It is next to a pool, but the ship has another pool so that area can be avoided completely by anyone not wanting to breathe in tobacco smoke. There is a shelter there for people to sit under. 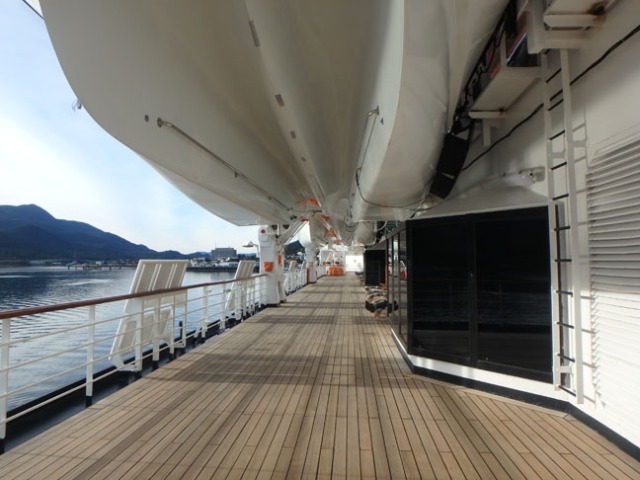 Without smoking the outside area of the promenade deck is a great place for exercising. The Westerdam has the awesome sort of promenade deck that circles around the entire ship. It’s a very popular place for passengers to walk and jog. Most of it is shaded by lifeboats or higher decks so there is a bit of shelter from sun or rain, which is much nicer than the top deck jogging tracks some ships have. The Westerdam even has several drinking fountains spaced around the promenade deck for the people who walk or run there.

Holland America’s Navigator app puts the daily schedule literally at your fingertips with all of the ships daily events and activities conveniently available in your phone or other mobile device along with with free chat, menus, the ability to book things like shore excursions, specialty dining, or spa appointments. It’s also the portal to paid internet. 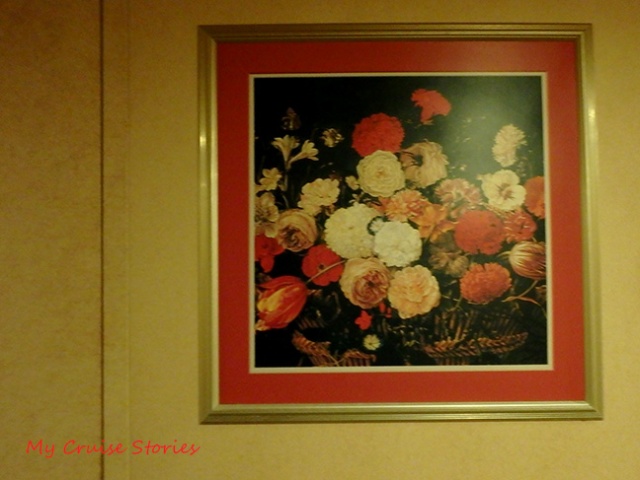 Refurbishments to the ship replaced anything that may have began to look worn keeping the ship from looking old. In spite of a major makeover they did keep some touches of the original décor like Dutch flower paintings and scenes of the old world.

Most cabins on the Westerdam have bathtubs rather than just a shower, which means even if you just use the shower you still get a longer clothesline. Inside cabins just have showers, but on a lot of ships only suites get tubs so a lot more people get them here.

this was one of my favorite meals on the Westerdam

For the most part the food on this cruise was very good.

There were lots of different options for daily activities including some itinerary related guest lecturers.

At the nighttime cabin cleaning the steward left chocolates and a towel animal. One morning the lido deck was covered in towel animals. 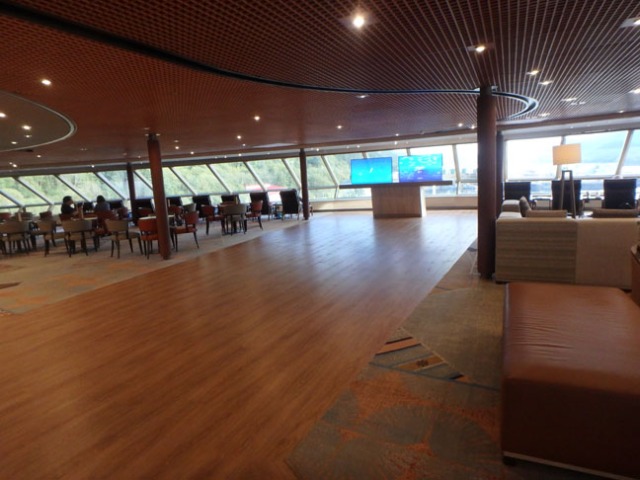 The bridge crew often made announcements of where to look when there was something worth seeing like whales off the starboard bow. There was also a great indoor viewing area in the crow’s nest lounge with floor to ceiling windows all across the front of the ship.

On the second half of a back-to-back cruise, which Holland America calls a Collector’s Voyage, they did not make the people who were already onboard attend the safety drill, just the ones who embarked that day. At the end of the first half they had a special luncheon that all the people staying for the next voyage were invited to, and the first night of the second half little plates of homemade chocolates were delivered to all the Collector’s Voyage people.

The ship has a sliding dome over the center portion of the Lido so on cold days or in bad weather the main pool and surrounding area can be indoors.

The new modern minimalist type décor replaced the beautiful old crystal sailing ship that used to hang in the atrium with an ugly swirly thing. The new décor makes the ship seem quite plain and far less grand than it was originally and a lot of the new furniture is very uncomfortable, including the seating in the theater.

the new theater furniture was quite uncomfortable

While the Navigator app is a great idea, and very useful when it functions properly, some parts of it didn’t work. The menus were always at least a day behind so we could only see what we had already eaten and not the current night’s dinner choices.

Older ships like the Westerdam tend to have continuous airflow into the cabins. You can adjust the temperature, but can’t turn it off. The ceiling vent is in the center of the cabin so continuous airflow means nonstop noise day and night. It’s not that noticable in the daytime, but definitely annoying when trying to sleep at night.

view of laundry lines from above

The ship has no self serve guest laundries. We were on a 28-day voyage and sending clothes out for the crew to wash is expensive. So that meant a lot of hand washing in the cabin’s bathroom sink. Good thing we had a bathtub because besides a longer built-in clothesline, that also means more space for tying up additional clotheslines.

While the main cabin has continuous airflow, there is none in the bathroom. Besides fogging the mirror and steaming up the room when anyone showers, if you handwash any clothes you have to keep the bathroom door open to get anything dry. Even if you don’t do laundry and just hang a swimming suit it dries a lot faster with the bathroom door open.

One of the heated ceramic chairs in the spa’s thermal suite did not work. This meant only 5 of everyone who bought the thermal package’s favorite loungers were available unless someone used the cold one – which defeats the purpose of having it heated. It was out of order for the entire cruise.

The paid internet did not always work. Holland America’s free onboard site is the only page it would open some days which does not help a bit for things like checking email – which is important for people like us who have someone at home running our business while we’re away who is not familiar with it and may have questions. Once we got out to sea even though there were less days left in the voyage the price for upgrading to their fastest internet went up. Their categories were one that allowed for social media sites only, one that would go to websites and emails and things and one that allowed streaming. Cruise ship internet is always notoriously slow, but I thought it rather dirty of them to jack up the upgrade price as soon as they got far enough out for it to slow down considerably, expecting people to pay a higher price for less days of coverage. Not a way to inspire satisfaction among their guests, that’s for sure. Then again since people we talked to who had the streaming upgrade said theirs didn’t work any better for emails or anything than ours did maybe it just saved us some money.

It was very very cold inside the ship. In warm climate cruises they always crank up the air conditioning so you need a sweater inside, but on this cold weather cruise when you would expect heat instead of air conditioning it was even colder than usual throughout most of the ship.

On the last evening after serving dinner, but before bringing out dessert they have a little presentation to acknowledge the behind-the-scenes people – which would be fine except that a bunch of the guests in the dining room take their dirty napkins and start swinging them around in the air flinging off whatever might be on them be that bits of food debris or germs. Considering that unsanitary behavior among passengers it would be best to do the introductions before serving any food while the napkins are still clean. (This cruise was taken pre-covid so that may have changed now that people are more conscious of trying not to spread disease among passengers. At least I hope so.)

MyCruiseStories blog tells stories about adventures in cruising on ships big and small. Things to do onboard and in port. Anything connected to cruising. Also food, travel, recipes, towel animals, and the occasional random blog.
View all posts by LBcruiseshipblogger →
This entry was posted in Holland America, Shipboard Life, Westerdam and tagged bad things, cruise, cruising, good things, Holland America, travel, Westerdam. Bookmark the permalink.

4 Responses to Westerdam Hits and Misses