Posted on October 22, 2021 by LBcruiseshipblogger

view of Shanghai from the Westerdam

Shanghai is China’s largest city as well as a global financial hub and the place where our 4-week Canada to China cruise came to an end. The city’s population exceeds 24 million. The Chinese characters that make up the city’s name together mean upon-the-sea. Shanghai has a 4-season climate with hot humid summers and cold damp winters, often with freezing temperatures at night and very little snow. Spring is often wet while fall is generally sunny and dry. Public transportation includes trains, busses, ferries, and taxis as well as the cruise port and an international airport.

ships disappearing into the smog near the port in Shanghai

Getting Shanghaied back in the 1800’s meant people might get knocked out (usually by alcohol or drugs) only to wake up and find themselves on a boat to China where they had been recruited as crew whether they liked it or not. Unlike today’s large cruise ships with stabilizers, those old wooden sailing vessels would pitch and roll in rough seas, often making seasickness a problem. Being a major shipping port, these unwilling sailors often ended up in Shanghai. Acupuncture has been practiced in China for centuries, and there is a pressure point on the ear that can ease seasickness, hence the penchant of pirates for earrings – often more than one since they may not have found the right spot on the first try. Currently the term Shanghaied means getting tricked into doing some sort of work for someone.

scooters in a narrow alleyway in Shanghai

Probably the most dangerous thing in modern day Shanghai aside from pollution is the crazy scooter drivers. They’re not only dangerous to pedestrians, but also to themselves. They ride in streets with the traffic, against the traffic, and often right through red lights and crowded crosswalks. They also ride on the sidewalks. The scooters are pretty quiet so you don’t always hear them coming up behind you. Scooter riders often neglect to turn their lights on when riding after dark to save the power lights take to run. People park their scooters everywhere. Sometimes the sidewalk is so thick with scooters that there is no room on the sidewalk for anyone to walk so the pedestrians end up in the street along with cars, scooters, and bikes. In spite of all that we did not see any accidents while walking around in Shanghai and we did a lot of walking in the several days we spent there.

Chinese people do have some disgusting habits. Some of them spit all over the sidewalks and even on the floors inside sometimes. Something to do with a belief that phlegm must be expelled immediately. They also let their young children pee anywhere. Not just on the sidewalks outside either. We were at a restaurant in a tourist area when a little boy had to go. Instead of taking him to the bathroom like normal people his parents had him pee in a garbage can right at their table in a room full of other people having lunch. In another tourist area, which had restrooms, we saw someone have a little girl go on an open riverbank next to the pathway rather than taking her to a nearby toilet.

night cruise from the Bund

Shanghai’s original cruise port located at the Bund, which in itself is a tourist destination, holds only smaller cruise ships, but the new port farther down the river about 15 miles north of the city holds larger ships. While visiting China normally requires a visa, those passing through Shanghai in 144 hours or less and not visiting anywhere else in China may not need one depending on where they are from. The new port can accommodate up to 3 large cruise ships at the same time. Taxis are readily available at the port. The advice to avoid over-priced unlicensed scam taxis by getting into the official taxi line for a registered taxi may or not work. We walked a long way to get to the official taxi line rather than taking the nearby unlicensed cabs and even there the driver did not turn the meter on and overcharged for the ride into town.

Disembarking from the Westerdam meant quite a long walk through the terminal, with frequent stops to wait in line for the next line. The official taxi stand was quite a distance from where our ship disembarked, though nearer to some of the other berths. We were approached several times along the way by someone asking where we were going in hopes of steering us to their scam taxi. The licensed ones won’t approach anyone, they just pull into the taxi line, though as we found out having a license doesn’t mean they won’t still scam you. The taxi line had people coming from two different directions because Quantum of the Seas was disembarking that day too with a much shorter walk to the taxi stand and port exit than we had. 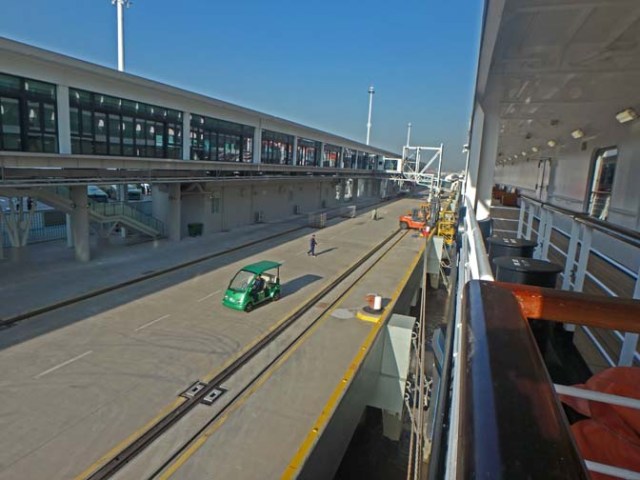 cruise port view from the ship in Shanghai

The port shuttle into town was only for people with no luggage (those staying onboard for the next cruise) and even they were recommended by the shore excursion staff to take a taxi because the drive to where it let people off was so far they figured it could take people an hour of wait time before boarding the shuttle since it would take the busses a long time to go to town and back. 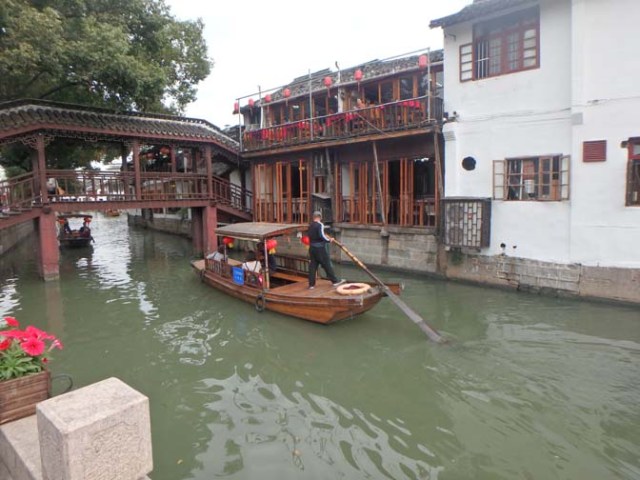 Things to do in Shanghai

Being a very large city, Shanghai has many options of things for tourists to do. It has museums, parks and gardens, temples, and towers.  There are a couple ancient cities turned tourist attractions somewhat near to Shanghai. One is called Zhujiajiao, which has canals with pole-boat rides somewhat like Venice, though neither the boats nor architecture is the same as that found in Italy. The World Financial Center building is one of the largest buildings in the world, but the Shanghai Tower is even bigger. Shanghai’s Pudong district has 3 tall towers with viewing areas for visitors.

You can ride the 270mph maglev train or go shopping. There are shows to see, food to eat, museums, tall buildings with observation areas on high floors, massages, and more. There are hop-on-hop-off buses from more than one company. The hotel gave us a map from the Bus B tours, which has 3 different routes included in one price, but we saw more busses from one called City Tours around town. We didn’t go on either, but the map was useful. 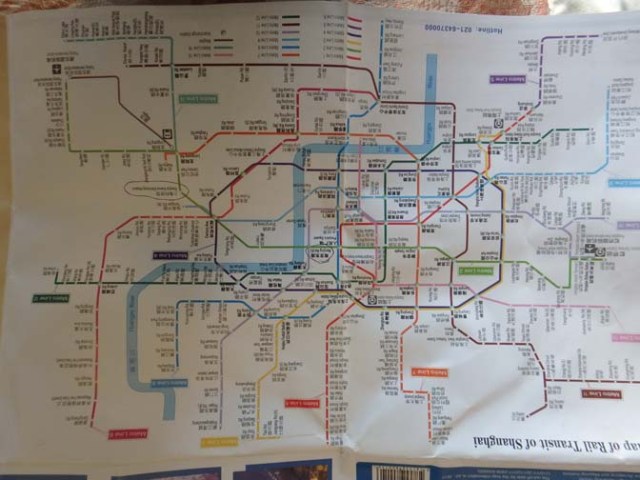 Subways are cheap and have stations listed in English as well as ticket machines where you can choose a language before purchasing the ticket so you know what you are getting. Some stations sell all day passes, but not all of them. You have to pay attention to where you enter the subway station if you want to find the same street on the way out. Most of the subway stations are huge, with multiple exits. A lot of them have shopping areas, some have entire malls.

sweets in a shop window

Street signs are also in English as well as Chinese. Massages are readily available and cheaper if you get them somewhere other than a hotel. Even less from a place not on a main tourist street than one in a prime location. They have everything from foot to whole body massages, and some will offer a variety of styles such as Swedish, Japanese, or Chinese.

night view from the Bund

The Bund has boat rides along the river, a ferry across, and a tourist ride that goes under the river. There are walkways along the riverside and eateries, and in the evening light shows on lots of the buildings. 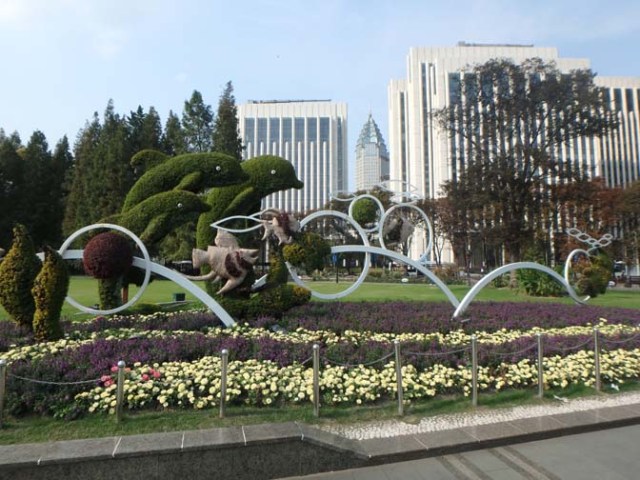 Gucheng Park near the Bund

There are a lot of things within walking distance of the Bund including several parks. 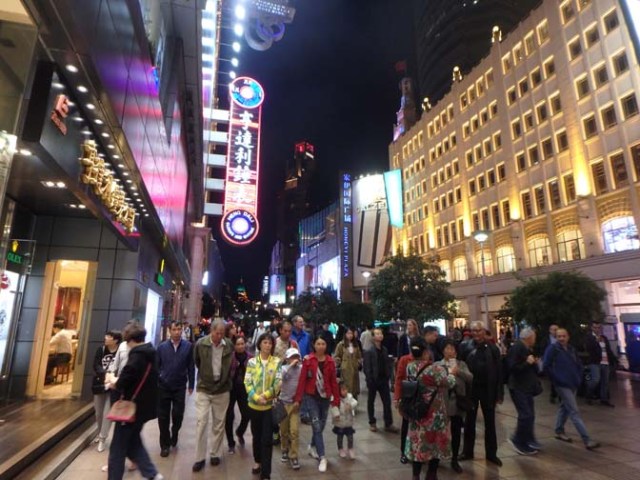 Nanjing Street is a famous tourist area with lots of shops and the world’s biggest Starbucks.

MyCruiseStories blog tells stories about adventures in cruising on ships big and small. Things to do onboard and in port. Anything connected to cruising. Also food, travel, recipes, towel animals, and the occasional random blog.
View all posts by LBcruiseshipblogger →
This entry was posted in China, Holland America, Port Cities, Ports of Call, Westerdam and tagged #shanghai, China, cruise, photos, Shanghai Cruise Ship Port, things to do in Shanghai, travel. Bookmark the permalink.