Posted on June 25, 2021 by LBcruiseshipblogger

We spent three days in Venice prior to boarding the MSC Lirica. We had enough time to wander around and see things, and to take a gondola ride. On our last full day in Venice we booked a 3 island tour through a local company called Alilaguna, which runs both public transport boats that use the vaporetto stops and booked tours that go to specific places with one group of people for the entire tour. Vaporetti are the Venice version of city busses, with stops along the grand canal and in some other places. The name means little steamer, coming from earlier steam powered versions of the public boats.

inside the Alilaguna tour boat

There’s more to Venice than just the main group of small islands connected by many bridges and Venice Mestre on the mainland which is connected to Venice proper by the bridge of Liberty. Within the lagoon where the main part of Venice sits there are numerous other more distant islands not connected by bridges to the main area of Venice. A long thin island called Lido where people go in the summer for its beaches may be the inspiration for the name Lido deck on many cruise ships, which is always the one with the pools. Many ships are built in Italy after all. While the lagoon looks like a wide open waterway, it is dotted with shallow areas where boats could easily run aground so the channels deep enough for safe travel are marked with rows of pilings like roads running through the sea. Knowing where the safe navigation areas were long before they were marked was what made Venice a safe haven for its early inhabitants as they could pass through, but even if would-be invaders had boats they could not. 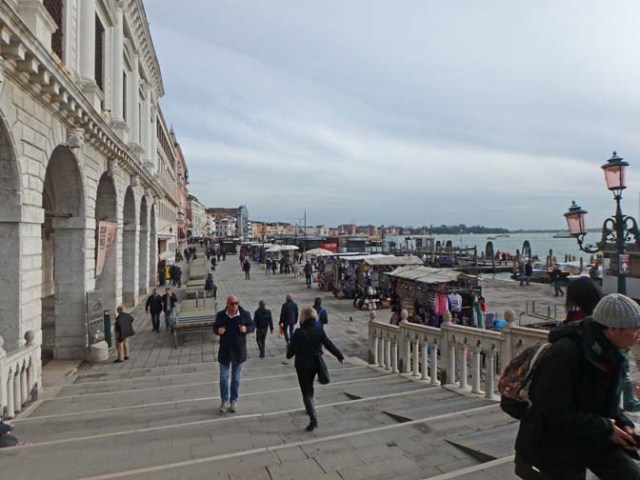 Besides many stops along the grand canal, the vaporetto public boats go out to some of the other islands. You can also get there by private boats or on a tour. Our 3 island tour with Alilaguna cost just 20 euros and lasted several hours with time to spend on each of the islands as well as traveling between them. The tour started from a far end of Piazza San Marco. There are boat docks all along the edge of the square for all sorts of different boats. Both Alilaguna and the vaporetti have docks in two different places at San Marco so we had to find the right one. It pays to get there early so you have time to find exactly where you need to be. The directions from the website where we booked the tour sent us to the wrong Alilaguna dock, but luckily one of their employees on a boat that came in there spoke English and was able to tell us where we needed to be.

The first time we went to Piazza San Marco (Saint Mark’s Square) it still had a lot of water remaining from a recent flood, enough that portable raised walkways were needed in parts of the square. The day we went for our boat tour the square was dry.

Once we found the right dock we had a short wait to board. There weren’t many people waiting when we first got there, but the crowd grew quickly so we got on the boat along with a bunch of other people. The boats don’t look all that big, but they hold a lot of people. The one we went on had quite a few empty seats left after a everyone boarded even though looking at the boat and crowd from the outside it seemed like there were more people there than could fit inside. Our first stop was Murano, an island famous for its glass. Apparently the glass blowers were all moved out there centuries ago to keep their skills secret so nobody else could rival their glass art, which is quite skillful. 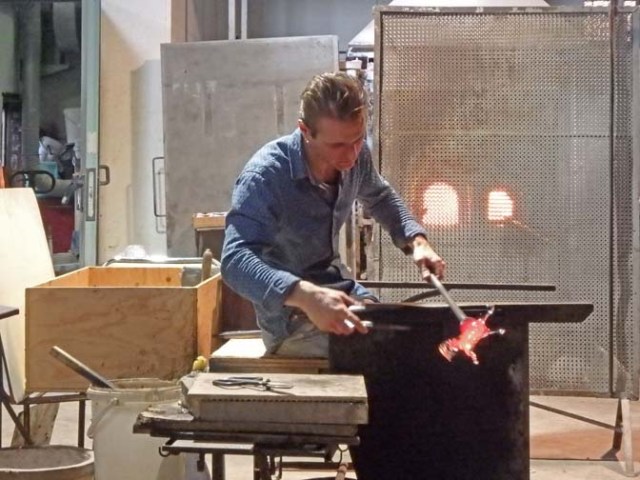 We went directly into a factory for a glass blowing demonstration. The artist had a long pole with a heated ball of glass on the end that he pulled and cut until it turned into a glass horse, but he never actually blew into the pole. It only took him a few minutes to turn a ball of molten glass into a little horse.

The glass factory had a shop that had all sorts of different glass figurines as well as jewelry. We had a bit of time to wander down the row of shops near to the factory, which also sold items made of glass. You would think prices would be cheapest at or near the factory, but we found a little shop on the rialto bridge that had some of the same things at about a third of the price.

Most places in Venice you have to pay to use a public toilet, but the glass factory had restrooms available for free. It was the only stop on this tour that did, the other two islands just having the pay-to-go WC (water closets).

The next island on our stop was Burano, famous for fishermen, colorful houses, and hand-made lace. This island was smaller and less populated than Murano, but the town was very cute with a canal lined with little fishing boats running alongside all the brightly colored buildings through the center of town, and little wooden bridges crossing over it. There was also a church with a leaning tower. Not nearly so big, tall, or angled as the famous tower in Pisa, but leaning nonetheless.

Since we were not spending time watching a demonstration on Burano we had more time to wander about and look at things. It was hard to get a picture that captured the lean of the church tower though.

lacey things in a shop on Burano Island

A lot Burano’s shops had intricately made lace items ranging from small decorations to clothing or tablecloths, and anything in between that could possibly be made out of lace. There were also restaurants and cafes, and places selling Murano glass.

The islands got smaller as we went. Our last stop on Torcello was the smallest and most sparsely populated of all. It had been an important religious area up until about the 14th century or so. That island’s claim to fame is the oldest church in Venice, built in the 7th century. It had a group of several ancient churches at the end of the walkway from the dock. It was probably somewhere around a kilometer from where the boat docked to anything, but it was quite a scenic walk along a canal.

there’s a few little shops and eateries along the walkway

Torcello is the farthest inhabited island from the main part of Venice, though it is barely inhabited with only about 10 permanent residents. Centuries ago there were thousands.

Walking in on a brick walkway from the dock on Torcello we passed by more greenery than we’d seen since coming to Venice, though the boat guide pointed out a different island in passing as being the one where most of their produce came from. Torcello had a few small shops and restaurants, and even a couple small hotels. It was a bit of a walk alongside (of course) a canal from the boat stop to the churches. 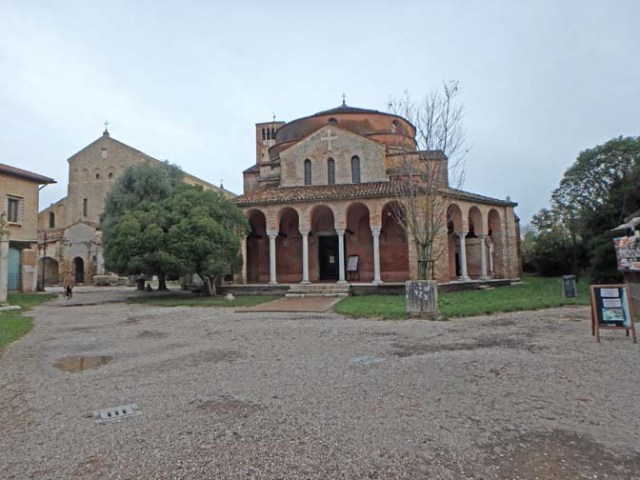 One of them was built in a different architectural style than what you usually see in Europe with the main part of the building round like a cake with ever smaller layers as it goes upward. That one was still functioning as a church, but people were allowed inside so long as there was not a service taking place. 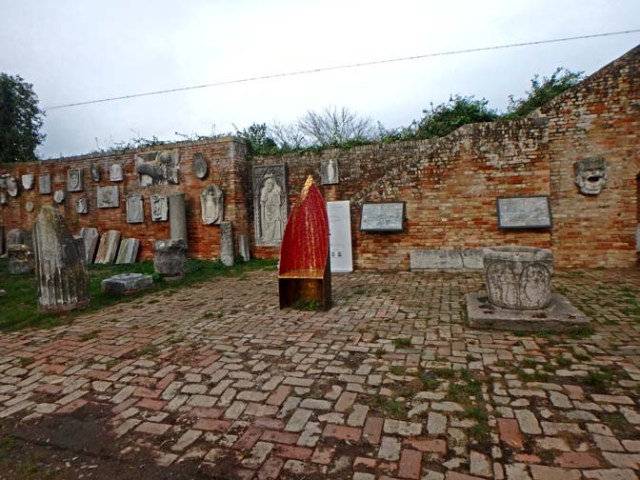 mosaic throne and other oddities

Another of the churches has been turned into a museum. There was a charge to go inside. A stone wall between two churches was covered with giant plaques. Stone monuments on and around it looked as if they could have come from a cemetery. Some were covered in mosaic patterns of shiny little tiles or stones, including a bright red one shaped like a throne. An old cemetery next to the church had many statue style monuments on the graves.

inside one of the old churches

Unlike the Swiss and Austrians who all spoke English quite well (especially the Swiss), not all the Italians do and the ones that can are often heavily accented. Even so, interestingly enough the boat tour was conducted in English, French, and Spanish – and NOT in Italian. 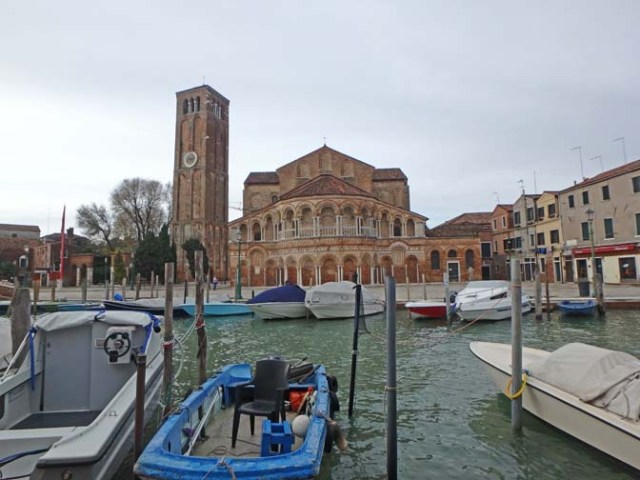 MyCruiseStories blog tells stories about adventures in cruising on ships big and small. Things to do onboard and in port. Anything connected to cruising. Also food, travel, recipes, towel animals, and the occasional random blog.
View all posts by LBcruiseshipblogger →
This entry was posted in Day Trips, Europe, Lirica, MSC, Port Cities and tagged Burano, glass blowing, Italy, Morano, photos, Torcello, travel, Venice. Bookmark the permalink.

5 Responses to 3 Island Tour in Venice