Posted on September 25, 2020 by LBcruiseshipblogger

Lirica through a mermaid sculpture on the seawall, and with the mermaid giving the ship a push

MSC Lirica docked in Heraklion on the island of Crete in Greece. Being a container port, passengers are not allowed to walk through the port area, but rather required to take a short bus ride to the cruise terminal. Following a painted yellow line on the sidewalk leads people past a marina to an old Venetian sea fort and seawall. From there it is not far to the downtown area where there are lots of shops and restaurants. 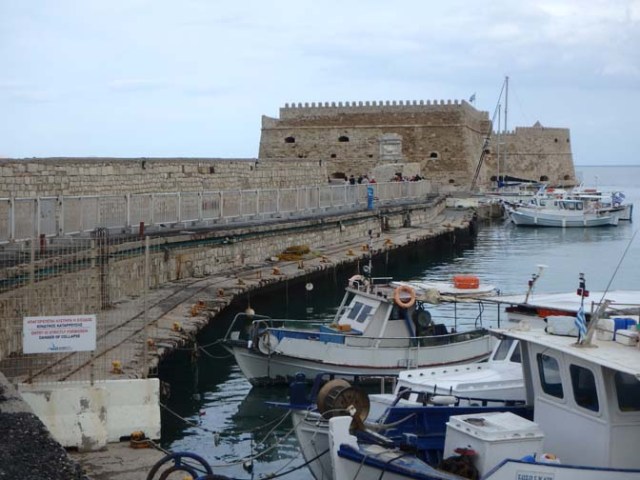 The fortress was built in the early 1500’s during the Venetian rule of Crete when the appearance of gunpowder in Europe made the previous tower guarding the harbor entrance obsolete. The original tower was demolished and boats full of rocks were sunk as landfill to form the platform on which the fort was built. Besides cannons, the 26-room fort had space for munitions storage, soldiers quarters, and accommodations for officers and the governor. It had its own mill and oven.

During the Turkish siege of the mid 1600’s the fort did not fare as well as the city walls. While the walls kept the Ottomans out for 20 years, the fort was neutralized early on giving the Turks control of the harbor. The Venetian Republic controlled Crete from 1205 after the dissolution of the Byzantine Empire until 1669 when the Ottoman Empire took control, finally victorious after their 20-year siege. Crete was called Candia during the period of Venetian rule.

viewport in the fort

It cost 2 euros to go inside this Venetion castle near the cruise port in Heraklion, usually called by its Turkish name of Koules Fortress, though during the Venetian period it was known as Castello a Mare or Rocca a Mare. For anyone without walking difficulties, it is within walking distance of the port. Just follow the well-marked yellow line along the pathway to the city center and you’ll be there. The distance from the cruise terminal to the fort is about a kilometer and a half.

artifacts in the fort

The castle (fort) dominates the view for the immediate area near the marina where it sits. Though not a large fort, the inside areas seem vast due to the very high ceilings. It is something of a museum with several rooms containing artifacts. One had a sign about a particular shipwreck near the end of the war just before the French ships left and Crete surrendered soon after.

Different rooms in the fort have different things. Some have old cannons and cannonballs. Some of the old cannons are quite ornate and one near the shipwreck sign had 1666 clearly carved into it. 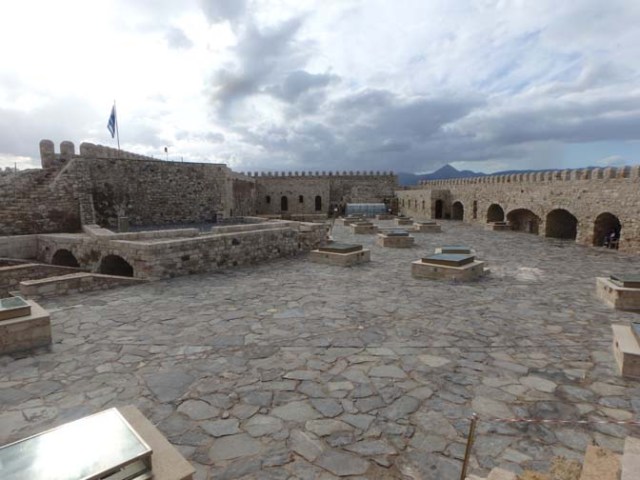 upper level of the fort 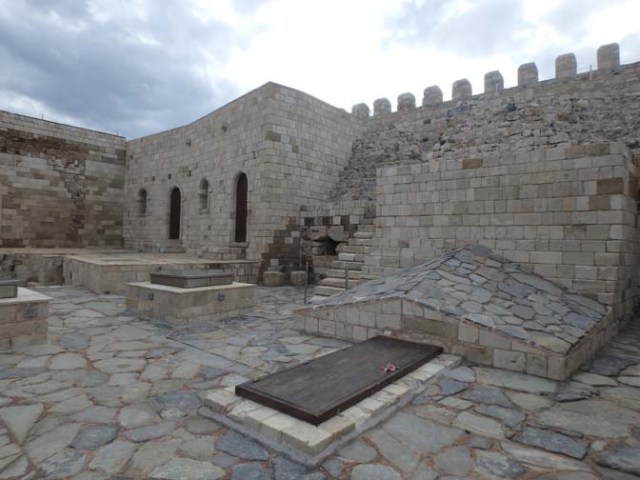 A stairway leads up to the roof of the fort, which has many raised glass squares that are all skylights letting in light to the chambers below.  There’s also something that looks like a door in the floor. It has knotched walls and some places where crumbling stairways are open allowing people to go higher.

upper level of the fort

Other stairways are closed to tourists. Windows to the sea would once have been used to aim weapons at approaching unfriendly ships. 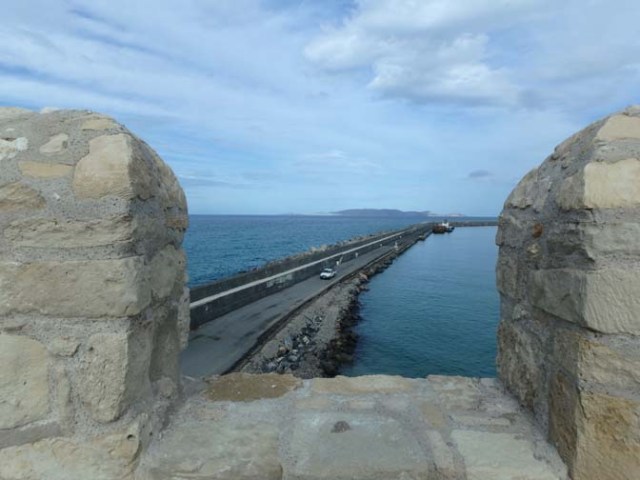 view of the seawall from the fort

Beyond the castle a seawall extends about a couple kilometers to a lighthouse. It’s a breakwater for the harbor, but also seemed to be a popular place for locals to jog or ride bikes. We even saw one guy fishing along the edge.

The inner side is open to the harbour, but the outer side has a wall much higher than the one with the main pathway, though there are a few stairways leading up to the top of the upper wall. There are also a couple small restrooms in the side of the wall along the pathway.

mural on the seawall

About halfway to the end there’s a row of artwork, some painted murals and some metal art sculptures. Most of the metal art is along the wall, but there’s a rusty mermaid out on a rounded-edged wide spot across from where our ship, the MSC Lirica docked. There’s a bench there where people can sit to rest or enjoy the view. 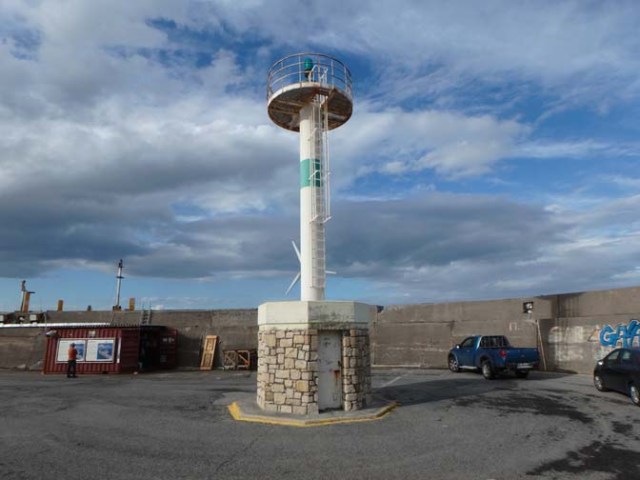 lighthouse out at the end of the seawall

Out at the end besides the lighthouse sitting at the center of another wide round area, there were some large metal pipes going up and down on the other side of the seawall. 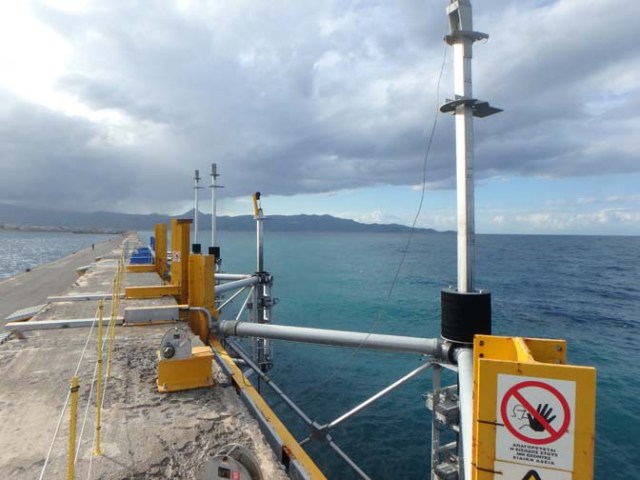 Climbing up to the top of the wall to look, they still just appear to be large metal pipes rising and falling with the waves – and a windmill, though when I was there the windmill was still.

one of the signs about the wave power project

Down on the main level, what looks like a dumpster on the end as you approach from the pathway has information on the longer front side explaining about the wave generation power project, which is what the moving metal pipes are so going to the end to see the lighthouse is rewarded by something else interesting and different. The power project is a prototype from a German company. 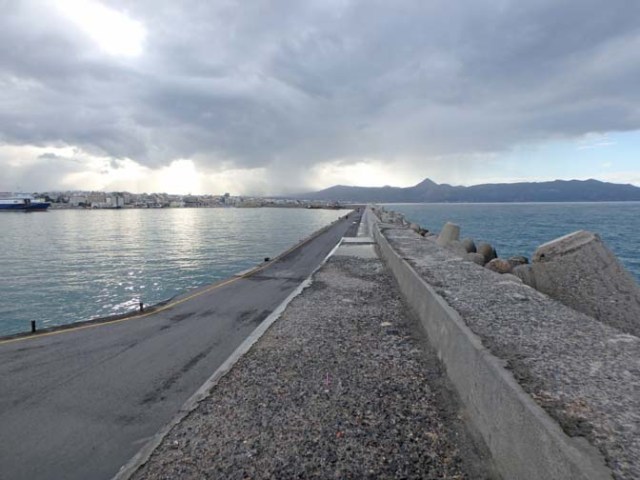 view from the top of the seawall