Posted on July 3, 2020 by LBcruiseshipblogger

In the crazily popular original baby shark video on youtube, baby shark is yellow so baby shark’s main body uses a yellow towel. If you just want a shark rather than a character from the video, use whatever color towels you like. Gray is perfect for any random ordinary shark or white for a great white.

For the underside of baby shark, fold the white hand towel in half across the short side. Roll the folded end over once, then roll in from the corners so that both sides roll as well as the folded end. Keep rolling until the towel is the right width for your shark’s underbody, then set that towel aside. 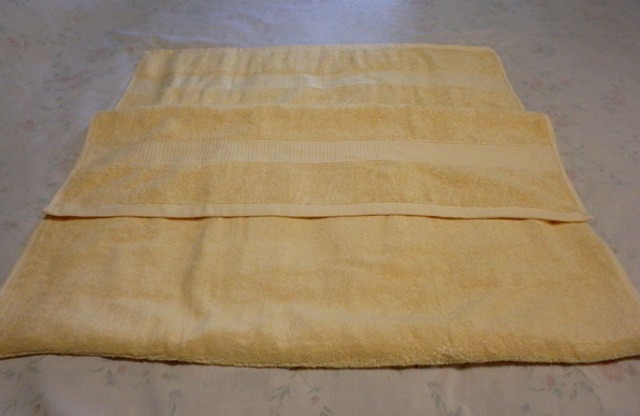 fold bath towel in half across the short side, then fold back the top end about halfway

For baby shark’s main body fold a yellow bath towel in half across the short side. Fold over the unfolded end of the top side about halfway up the towel.

with the towel turned over so the folded up edge is on the underside, roll all layers except the folded back end from the top and sides

Turn the towel over so the part you just folded is on the bottom and the unfolded end is on the top, Roll over the folded end and roll in from both sides just like with the underbody, except leave out the part that was folded over halfway up on the bottom for as long as you can. Eventually it will end up rolling with the towel as you finish rolling, but try to get as little as possible of that bit into the roll.

Adjust both towels as needed, rolling either one more or unrolling a bit if necessary to make them fit for top and bottom of the shark as desired. Then pull out any bits of the half of the layer that was folded over before rolling on the colored towel that got rolled in at the end. Gather enough of that part of the towel at the center and top over the rolled bit to make the shark’s top fin and form the fin as desired. You can simply pull both sides together in a triangular form, or fold in the center of that fold as you shape it, or fold that part of the towel over once more before forming the fin. Once you have the center fin made shape the excess that hangs over on each side into the shark’s side fins. There’s no right or wrong way to make any of these fins. Notice in the photos that the top and side fins do not look the same on all of the sharks. 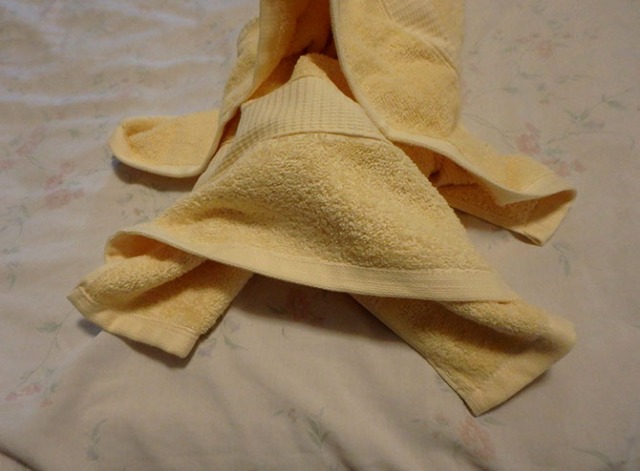 to make baby shark’s tail find both ends at the back of the body towel, and separate them,

Separate the back ends of the main body towel into two sides. Roll each side separately into a tail fin.

Odds are the two sides of the tailfin won’t come out in even lengths. Set the longer of the two on the top of the shorter one because shark tails go up and down, not side to side and the top part of their tailfin is often bigger than the bottom bit. 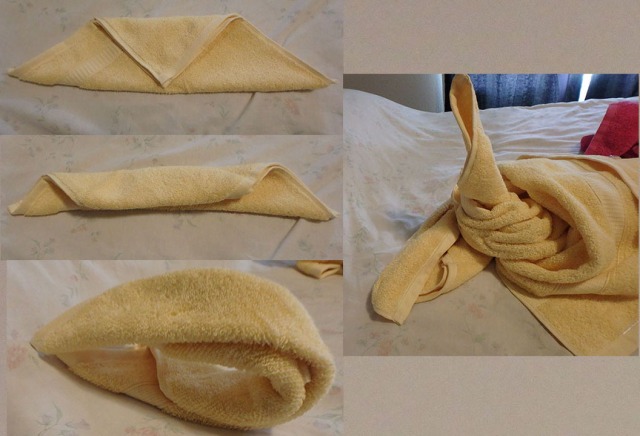 to make a washcloth tail fold washcloth in half diagonally, fold the point to the center of the long fold, and then fold over again. Fold the whole thing in half and then insert it into the back of the main body and either tuck the body towel ends around the tail or wrap the ends through the middle of the tail and tuck each one into the other side of the body

Alternatively you can make baby shark’s tail from a washcloth. For a washcloth tail, fold the washcloth in half diagonally, then fold the tip to the folded edge, and fold over once more. To turn it into a tail, fold the whole thing in half along the short side. Use the loose bits of towel at the back of the shark body to wrap around the middle of the tail from each side of the shark, which will both bring it all together and help hold the top part of the tail up. Tighten up the rolls as needed and re-shape the body as desired. Do final adjustments on the fins and tail. 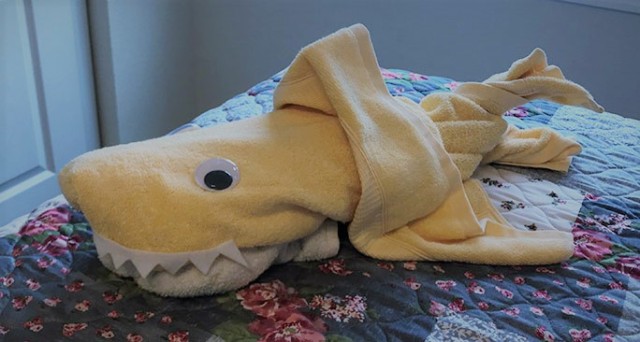 Decorate as desired. Use googly eyes if you have them or make eyes from paper or felt if you don’t. Teeth made of white felt or paper can be added if desired. Double stick tape is great for adding embellishments to towel animals.

Start the adult sharks the same way as baby shark with the white underside made from a hand towel and main body from a bath towel. For mommy shark use pink, daddy shark blue, grandma shark peach, and grandpa shark green. 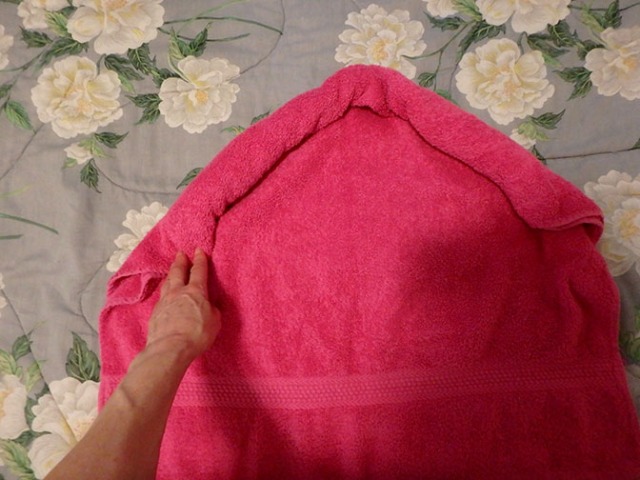 if it’s easier for you to just roll the entire towel without the extra fold at the back and then pull out the whole bit for the top and side fins after rolling that works too.

For any of the sharks including baby if you find it easier to just make the initial fold in the bath towel and then roll the whole thing without folding part of it over to leave out of the roll you can. You just need to pull all of the part for making fins out of the roll afterword rather than part of it, but it turns out the same in the end.

To make the adult sharks bigger than baby shark, use a hand towel to make the tail. First fold the towel over about 3/4 of the way along the short side so it becomes a square. Then fold the towel diagonally. You can fold this towel tail the rest of the way the same as the washcloth option was done for baby shark if you want. 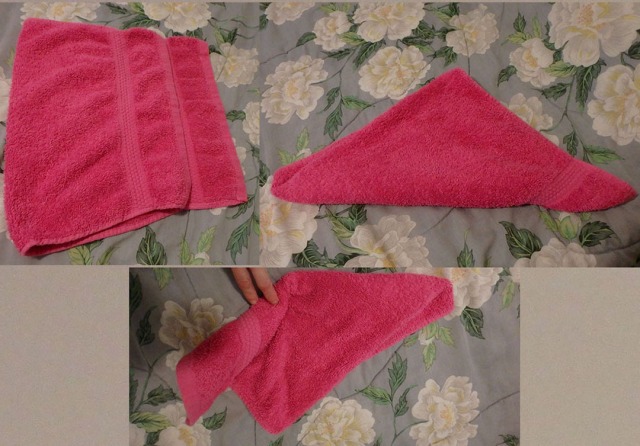 fold the hand towel over across the short side so that it becomes a square. Fold the square in half diagonally turning it into a triangle. With a finger holding down the center of the long side of the triangl, roll each end nearly to the middle.

For a sturdier tail that will stand up better put a finger at the center of the long fold of the triangle and then roll one side from that center point.

tuck the tail into the shark body and tuck any excess body towel underneath like on mommy shark or wrap the ends of the body towel around the middle of the tail as done with daddy shark.

You can make a longer body by just tucking the tail into the open end of the body towel and tucking any excess underneath like the gray shark or make the tail fin more prominent by wrapping the excess over the center of the tail as shown on daddy shark. 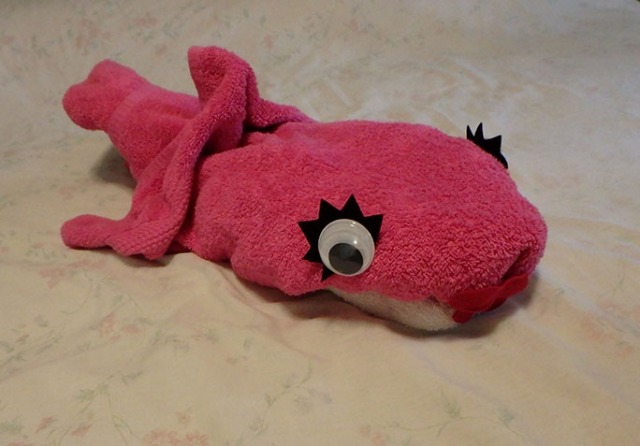 Decorate shark as desired. For mommy shark I made black felt eyelashes around googly eyes and felt lips.

Daddy shark has white felt teeth. Grandpa shark has white cotton eyebrows and mustache. I did not have the right color towel for Grandma shark so I didn’t make her, but if making grandma, she needs a pair of glasses. 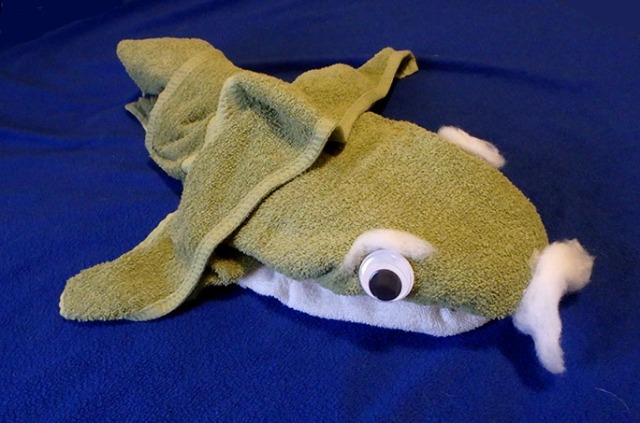 Neither grandma nor grandpa ever show any teeth in the original video, but the other three do at least sometimes with daddy showing teeth most and mommy just at the very end. 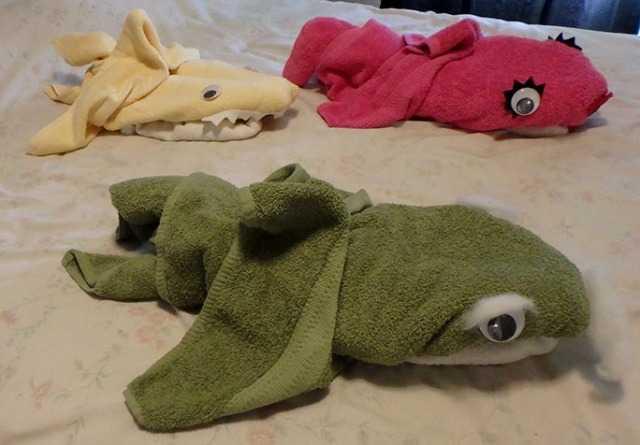 MyCruiseStories blog tells stories about adventures in cruising on ships big and small. Things to do onboard and in port. Anything connected to cruising. Also food, travel, recipes, towel animals, and the occasional random blog.
View all posts by LBcruiseshipblogger →
This entry was posted in Towel Animals and tagged baby shark, daddy shark, free towel shark folding instructions, grandpa shark, how to fold a towel shark, mommy shark, towel animals. Bookmark the permalink.