Posted on February 7, 2020 by LBcruiseshipblogger 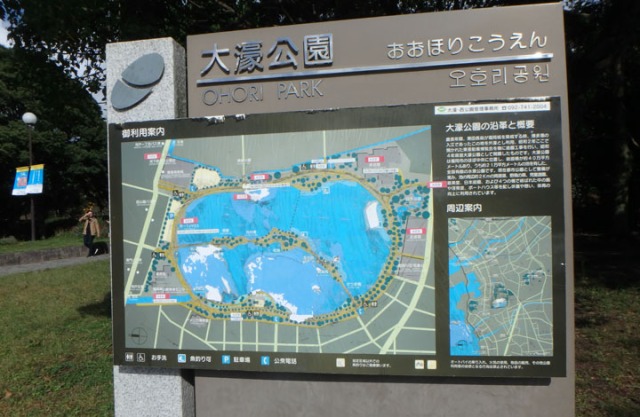 map of Ohori Park at the park

Holland America Westerdam docked at Chuo Wharf, Hakarta Cruise Port in Fukuoka, Japan on what started out as one of those if you don’t like the weather wait 5 minutes days. For the most part it was overcast, but there were sudden bursts of sunshine, occasional short downpours, and sometimes a pretty strong wind kicking up. Waves bounced around the wharf kicking up whitecaps.

pagoda on the island at Ohori Park

There’s nothing much near the port in Fukoaka/Hakarta, but they did have free wifi and information and maps in the terminal. The port provided free shuttle service to City Hall in town with busses running about 1 every 20 minutes. We decided to see Ohori Park, which is just a couple subway stops away from Tenjin Station near city hall. 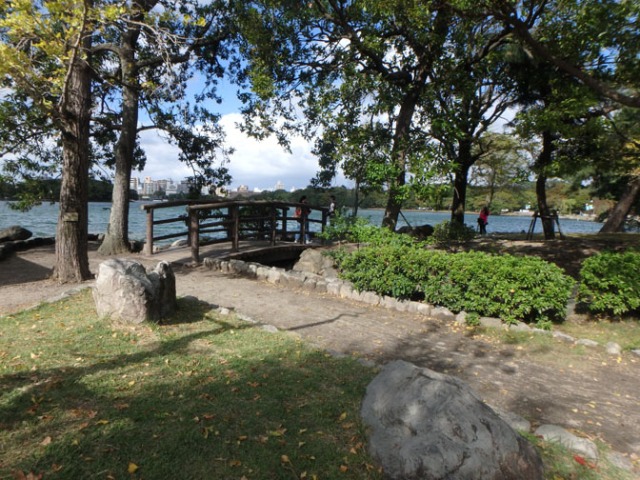 The subway station has multiple entrances and an underground shopping center so it’s important to note where you came in so you can leave the same way in order to know where you are when emerging on street level. The stairways into the subway area often look the same, but they are all numbered. Take note of what number you came in on so you can find the right one when you want to leave. It’s also important to make sure you know which platform to go to for the train line you want and the direction you need to go. Ohori Park is on the Kuko line 2 stops away from Tenjin with a station called Akasaka in between. Since it was painted on the wall which station the train was coming from and going to knowing that is quite helpful in insuring you are on the right platform. The park is at Ohorikoen Station – koen meaning park. This station also has multiple exits so check what goes where to find the right one. (Take exit 3 for Ohori Park, exit 6 for the elevator, or exit 5 for Maizuru Park and the castle ruins.)

sculpture on the side of the trail on the island

Upon surfacing to ground level from the subway we took a look around to make sure we’d recognize the area in order to find the station again. Which wasn’t hard as long as we left the park the way we came in since the park entrance was not far from the subway. Checking our surroundings we noted a playground near where we entered the park, useful for locating the correct exit to get us back to the subway station when it came time to leave. 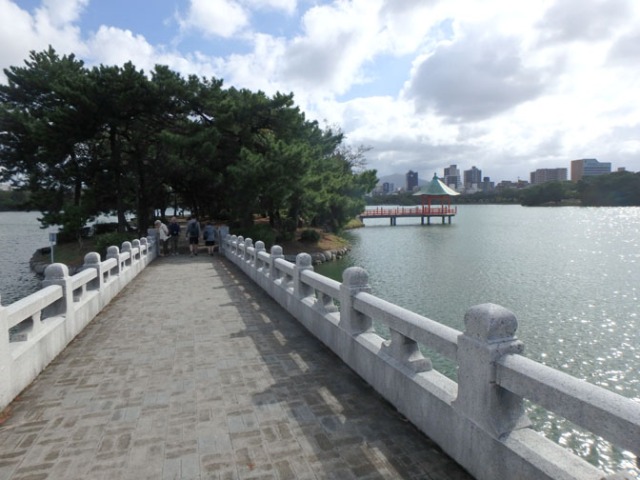 bridge across the center of the lake

Ohori Park has a trail around a lake that was once a moat to a castle. Bridges to an island in the center make a shortcut right through the lake as well as a pleasant path to walk on. There’s a bike trail and running path around the lake as well. Some pretty good-sized fish clustered around a no fishing sign next to the bridge. Soon a turtle and ducks swam out from under the bridge together. A little red pagoda juts out into the water on its own dock on one side of the island.

Trails off to the side of the lake lead into a Japanese garden near the far end of the bridge from the subway station. Near the playground more trails lead into the area noted as castle ruins, though other than one of what used to be many towers there didn’t seem to be much in the way of ruins there. It did have a section with many little cabanas, some with outdoor furniture and others with picnic tables, and lots of barbecues. Whether those are always there or were just there that day for a race people were in the process of setting up for I can’t say.

Off to the end of the field with the trail leading to the tower we saw what looked like a homeless camp with lots of cats. First sign of homelessness we’d seen in Japan, and we didn’t come across any anywhere else.

The lake had a cluster of swan boats and other little boats floating about, but it didn’t look like they were renting any out that day as nobody was using any of them. It may have been too windy for them to be used safely that day. 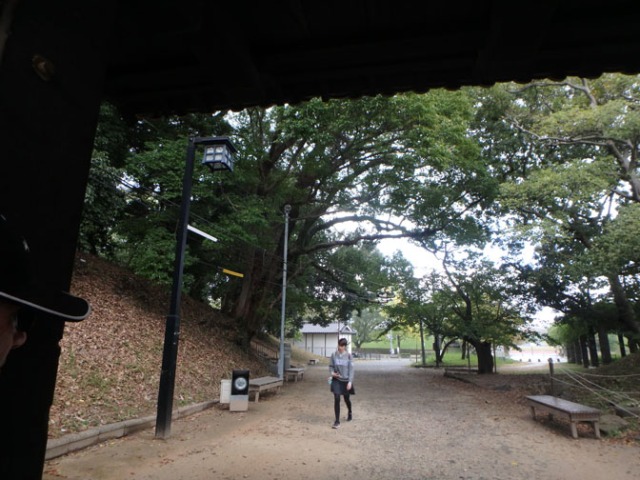 Fukuoka castle ruins sit fairly close to Ohori Park, but it started pouring down rain before we got through the park and this time the rain showed no sign of stopping so we didn’t go there. Instead we made our way back to the subway when we caught a brief break where the rain let up enough to emerge from the archway we hid under during the worst of the downpour. Since there is that one turret in the park we did at least see something from an old castle. 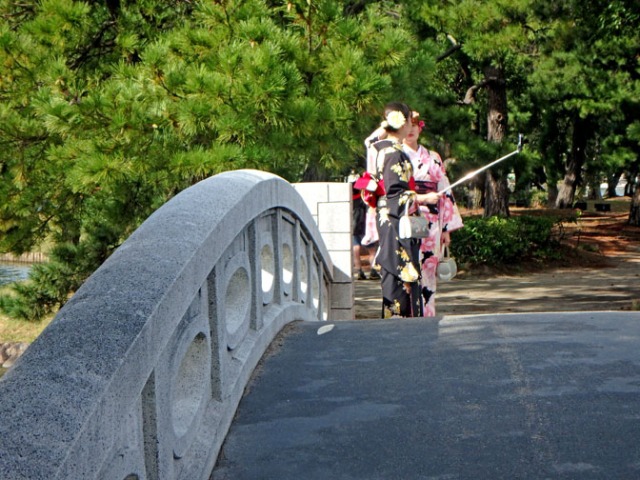 brides like to pose for pre-wedding photos in Ohori Park, in traditional or modern clothing

Overall Ohori Park is a pleasant place to spend a day, especially if the weather cooperates.

MyCruiseStories blog tells stories about adventures in cruising on ships big and small. Things to do onboard and in port. Anything connected to cruising. Also food, travel, recipes, towel animals, and the occasional random blog.
View all posts by LBcruiseshipblogger →
This entry was posted in Holland America, Japan, Ports of Call, Westerdam and tagged #fukuoka, #OhoriPark, cruise, Holland America, Japan, Ohori Park, photos, travel, Westerdam. Bookmark the permalink.