Posted on February 22, 2019 by LBcruiseshipblogger 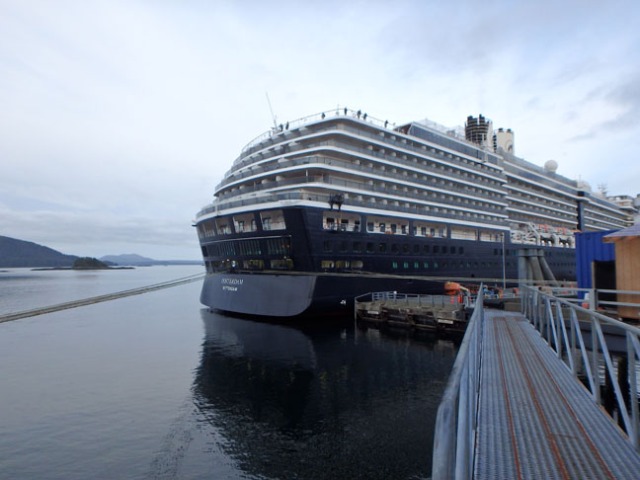 Every ship has things to like about it, and usually something not so great. Of course what people like or not is always a matter of opinion. One person’s absolute favorite thing about any particular ship could be the exact thing someone else hated most. That’s one reason it’s nice that ships have a variety of spaces and places so most everyone can find something to their liking. These are the things I did and didn’t like about Holland America Oosterdam.

I found a lot to like about the Oosterdam. The thermal suite is a definite hit. Holland America’s Vista class ships (and P&O’s Arcadia which is the same hull design) all have excellent thermal suites. This includes a large mineral pool with jets around the walls, a rack over jets to sit on, and an intensely jetted area inside a metal circle. Besides the pool, the thermal suite also includes heated ceramic chairs which may not sound comfortable, but are actually awesome. There’s also a sauna and aromatherapy steam rooms. It does cost extra to use the thermal suite, but worth the extra cost on these ships since it is so nice. 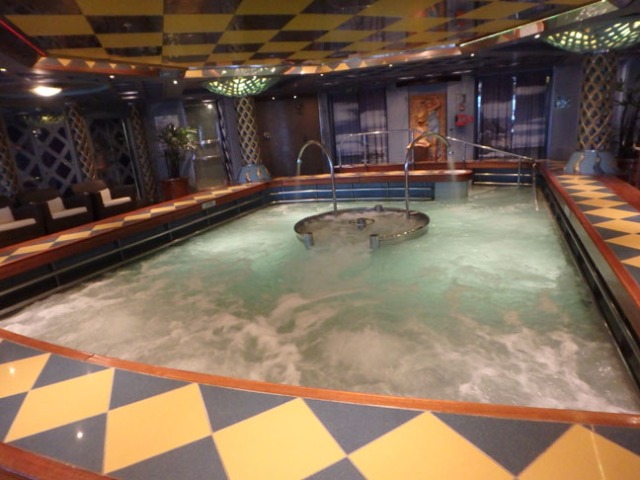 spa pool in the thermal suite

The Oosterdam had cloth hand towels in public restrooms, which is  touch of class that is far nicer than paper towels and miles above air blower hand dryers, both of which are found on some cruise ships.

Cruise ship cabins sometimes have just one outlet for the entire cabin. The Oosterdam had 2 outlets as well as 2 USB ports in our cabin, and we just had an inside room. Newer ships and those that have been recently renovated are far more likely to have extra outlets and/or USB ports while older non-renovated ships usually just have the one outlet and no USB port. It’s definitely a bonus to have more than one place to plug things in. 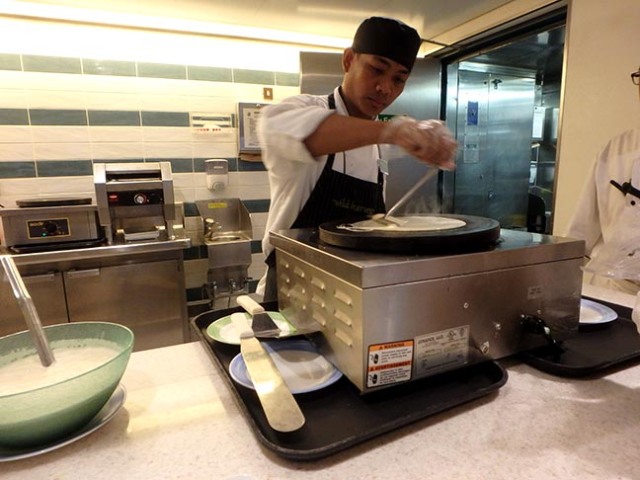 making fresh crepes at the buffet

Their buffet breakfast on the Lido deck includes a crepe station serving fresh made-to-order crepes and waffles. They also had daily specials there serving something different each day. That station also had some gluten free items. Another station served eggs Benedict made fresh to order rather than sitting out ready made under lights like at the buffet on some other ships. Surprisingly the eggs Benedict station never had a line. There’s also the always popular omlette station. Overall an above average cruise ship breakfast buffet.

pool with the dome closed

The Oosterdam has a retractable pool dome, which means on bad weather days or cruises to cold places the main pool area can be inside rather than outside which is definitely a plus on a cruise to Alaska.

Oosterdam had the best smoking policy of any ship we’ve ever been on from a non-smoker’s point of view. There’s no smoking on the promenade deck or anywhere inside the ship. Smoking was limited to just one area on one side of the Lido’s outside back deck only. They did have a cover over the seating in that area so people would not have to be out in the rain or anything. It’s the perfect location for a smoking area. It’s not on the way to anywhere so you don’t end up inadvertently walking through it, and at the back where the ship sails forward out of the smoke. There are two sets of doors between the elevators and that deck so less smoke gets inside. It is next to a pool and hot tub, but since it’s not the only pool or hot tub on the ship people have other options. Way to go Oosterdam! Being allergic to tobacco smoke I greatly appreciated the ease of avoiding it on this ship. Unfortunately that is not a standard smoking policy for all of Holland America as it varies from ship to ship. 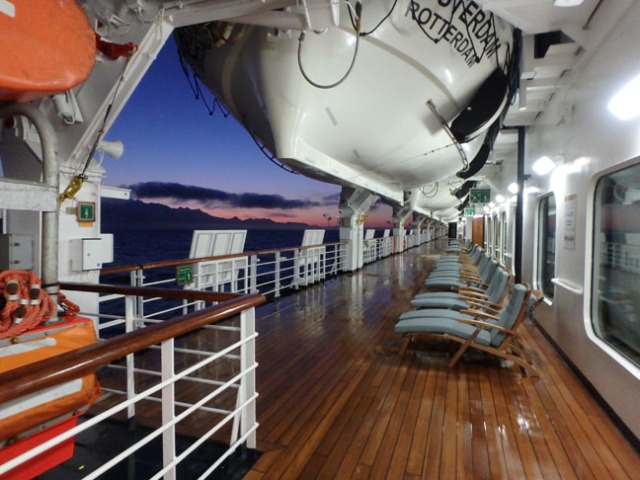 Lots of people exercise by walking or jogging around the Promenade deck on ships that have one encircling the entire ship, as the Oosterdam does. Besides being smoke-free, the outside area of the Promenade deck also had several drinking fountains making it a very exercise-friendly place to go.

TV in a cabin

Programming for the cabin TV’s included lots of free movies to choose from.

While most internet usage is an extra charge, it was free to use the internet for their onboard website. It had information about the cruise including daily menus and schedules of the onboard activities for the day. They did have a daily paper newsletter listing the activities as well.

towel elephant in our cabin

Each evening we came back to find a new towel animal in the room.

There’s always a few things on any ship not to like, or that could be improved.

Open times for the ship’s shops were not posted at the stores or in the When & Where daily newsletter.

The ship has no self-serve guest laundries.

Doors on the showers and dressing rooms in gym/spa changing area are see-through glass rather than anything offering privacy.

There’s no oatmeal in serve yourself areas of the Lido buffet at breakfast. If you want any you have to wait to be served and it’s located at the middle of the most crowded station so it’s a long line.

There’s constant air blowing inside the cabin. You can adjust the temperature, but can’t turn the airflow off which means the sound is there day and night. This is an issue on a lot of ships, particularly older ones. They seem to have solved that problem on the newest ships I’ve sailed on.

The food on our cruise was not on par with what we’ve come to expect from Holland America. Food does vary from ship to ship and even on the same ship over time. It’s not that the food was bad, just the last time I’d been on Holland America the food was the best I’d ever had on a cruise ship and in comparison the food on this ship was a disappointment. One 0f the items on their everyday dinner menu said steelhead salmon, but steelhead is a sea run trout. So is it steelhead or is it salmon? The chef knew that was wrong yet nobody had ever changed the menus and we were there at the end of the season.

the curtain over nothing but wall makes the room feel smaller

Inside cabins have a curtain over a wall at the back of the cabin, trying to give it the look of a window. What that curtain actually does is make the room seem smaller. Some ships have a mirror on the back wall of inside cabins, which make the room feel bigger.

Yes I realize most of the misses are minor and petty, but it’s a hits and misses blog so there have to be some misses.

MyCruiseStories blog tells stories about adventures in cruising on ships big and small. Things to do onboard and in port. Anything connected to cruising. Also food, travel, recipes, towel animals, and the occasional random blog.
View all posts by LBcruiseshipblogger →
This entry was posted in Holland America, Oosterdam and tagged bad things about Oosterdam, cruise ship, good things about Oosterdam, Holland America, Oosterdam, Oosterdam smoking. Bookmark the permalink.