Posted on December 25, 2018 by LBcruiseshipblogger

Nestled in Washington State’s Cascade Mountains near Stevens Pass sits a Bavarian-themed town called Leavenworth. It’s a great tourist destination year-round, but near Christmas the town really comes alive with a festival of lights. Strung with Christmas lights Bavarian style hotels light up the town for the holiday. A small park is the hub of activity with lights, carolers, free sledding with sleds provided, and a Christmas market.
On the outskirts there is more fun to be found in the form of sleigh rides or dogsledding, with sleigh rides the far more affordable option of the two. 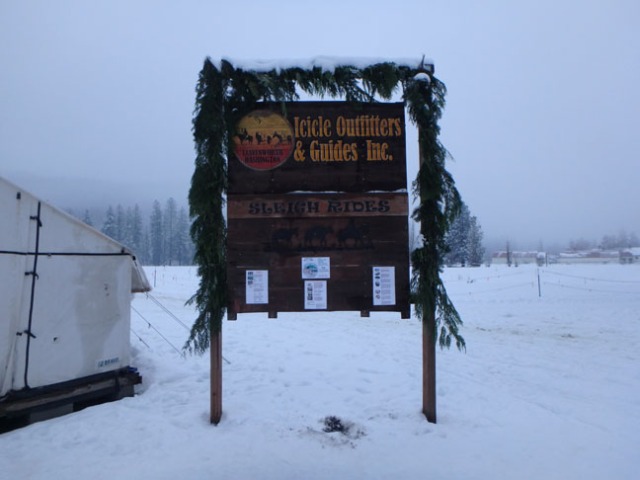 If you’re there without a car, Icicle Outfitters will pick you up in town and bring you to their sleigh ride venue near a fish hatchery outside of town. There’s also room to park for those who come by car. In the summertime Icicle Outfitters has trail rides and pack trips.

We pulled up to see a team of mules on one large sleigh, horses on another, and a smaller one-horse open sleigh. Actually they were all open sleighs, the ones with teams of 2 were just bigger. Since we came with a group of 10 we had a big sleigh just for our party. The price for the ride is quite reasonable. Most of our group came from Australia, so for them snow is a rarity.

riding in the 2-mule open sleigh

There’s often news about warming temperatures and diminishing ice in the Arctic and Antarctic, but global warming affects other places as well. The ski area at Stevens Pass opened very late due to lack of snow this year, and the day we went to Leavenworth it was actually raining – in December. They did have snow on the ground from previous snows, getting slushy from the rain, but still enough for a sleigh ride. Unfortunately rain on an open sleigh means you get wet. 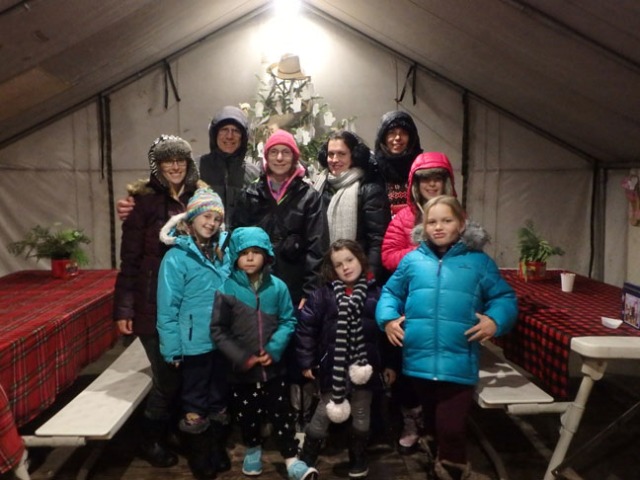 8 Aussies and 2 Americans warming up after a sleigh ride

There was a tarp over the sleigh before we got in, but being the last ride of the day the blankets both on the seats and for over our laps were already wet. This would definitely be a better activity for a day without rain, but we were just there for one day and we can’t control the weather so we went for a sleigh ride anyway.

It’s a pretty long ride mostly winding around through an open field, but a bit of it went on a trail between some trees. If the trees were too dense there wouldn’t be enough snow for a sleigh since they can only go where they have snow. We had the mule team pulling our sleigh. Mules have a horse mother, a donkey father, and much bigger ears than horses. At the start of our ride the driver sang some carols, and a few people sang along. During the course we saw a couple other sleighs out and about and once the mules even trotted a bit. Mostly they walked.

campfire between the tents

The starting and finishing area for the rides had two tent buildings with a campfire in between. One was for organizing and making payment at the start of the ride. The other we went into at the end of the ride. There everyone could warm up by the wood stove and have cookies with hot chocolate or cider. Some of the kids made ornaments to add to the tree at the far end of the tent.

Some of the Australian kids never had a chance to play in snow before so they braved the wet and cold for a snowball fight in the dark.

all the buildings in Leavenworth look Bavarian

While most people come to Leavenworth by car, anyone who doesn’t want to drive up a possibly snowy pass or over roads that may be icy to get there in winter can arrive by bus or train. The train station is not in town, but there is a shuttle that stops at some of the hotels to bring people to and from the station. It’s a very popular destination so it’s a good idea to book early. 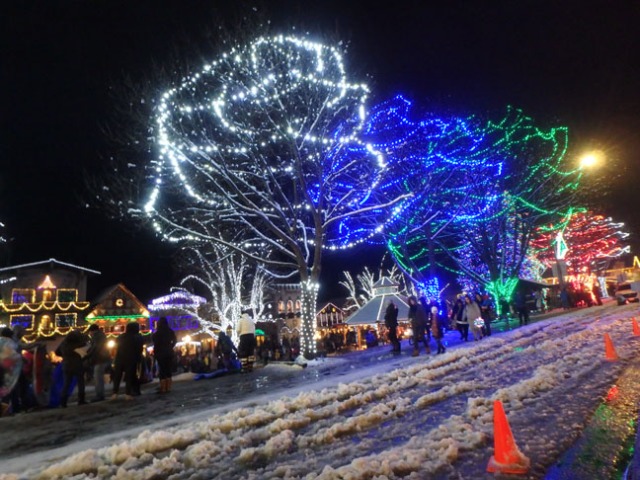 Leavenworth started out as an ordinary settlement with an economy depending on gold, furs, and logging. The town nearly died out when the railroad re-routed out of town until they had the idea to go Bavarian, throw in some festivals, and attract tourists to feed their lagging economy.

Leavenworth has lots of shops selling all sorts of unique things that make great gifts. There’s even a couple stores dedicated to Christmas all year long. Another store sells all manner of hot sauces and other items like honey and mustard. Clothes, shoes, hats, and knick knacks are plentiful, as is food in both the ready to eat and take home varieties. 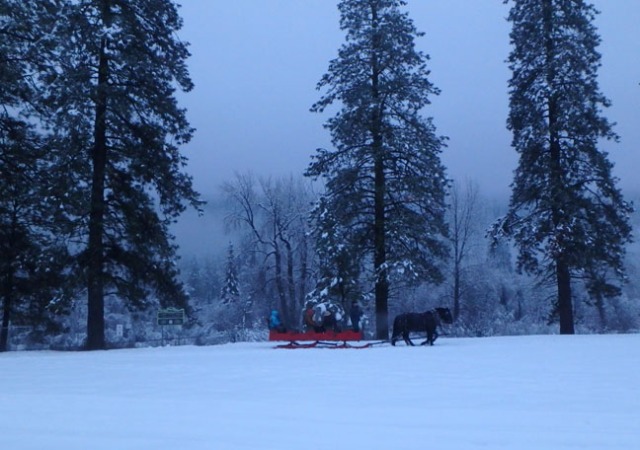 another sleigh we saw in passing

MyCruiseStories blog tells stories about adventures in cruising on ships big and small. Things to do onboard and in port. Anything connected to cruising. Also food, travel, recipes, towel animals, and the occasional random blog.
View all posts by LBcruiseshipblogger →
This entry was posted in USA, Washington and tagged Bavarian town in Washington, Cascade Mountains, Christmas, Leavenworth, sleigh ride, Washington State. Bookmark the permalink.

2 Responses to Leavenworth at Christmastime