Posted on November 9, 2018 by LBcruiseshipblogger 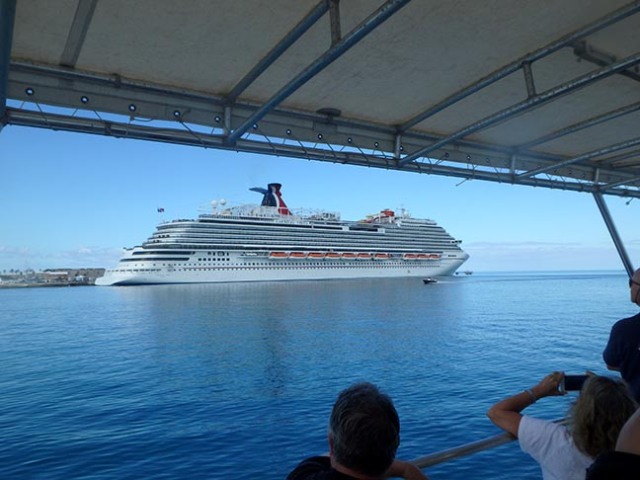 Carnival Vista from the snorkel boat

After crossing the Atlantic Ocean from a cruise starting in Barcelona, Carnival Vista stopped in Bermuda overnight before continuing on to the final destination of the cruise in New York. Cruises from mainland USA to Bermuda tend to stay a bit longer.

For the first day at this port stop we booked a snorkel tour in the Bermuda Triangle. The Bermuda Triangle is not just a triangle around Bermuda as the name would indicate. Bermuda is actually just one tip of a giant triangle with sides that extend to Puerto Rico and Florida covering an area of the Atlantic Ocean far larger than the tiny bit of space taken up by Bermuda.

We took off for our snorkel trip in a glass-bottomed boat captained by a local 5th generation Bermudian who provided a wealth of information about Bermudian life and history on the way to the site of the two shipwrecks in the Bermuda Triangle where we would stop for snorkeling. One was the Civil War era Montana which sank in 1863 and other the World War 2 Constellation that hit the same reef in 1943. Not much of the wooden Constellation still survives other than some cargo. The metal side-wheel steamer fared somewhat better, though not intact with ship parts and the paddle wheel scattered about and grown over with coral.

Bermuda has a land mass of just under 21 square miles, but the reefs encircling the land mass cover a much larger area. Large ships have to wind their way carefully through a channel of deeper water between tall reefs when entering or leaving Bermuda. Bermuda has no high ground and is over 600 miles from any other land so they have to be self-sufficient in surviving hurricanes. The closest land is Cape Hatteras in North Carolina’s outer banks.

Houses in Bermuda are very sturdy made from stone or cement and the roofs very heavy because their houses are the safest place they have to ride out a storm. 3 people died during one hurricane when one tried to cross a bridge and two cops went out to rescue him. The bridge went down taking all three people with it. They use their roofs to collect rainwater because Bermuda has no fresh water lakes or rivers and wells dug into its limestone ground would only find saltwater. Every home is built with a water tank.

shipwrecks make good structure for coral and other sealife

While coral reefs worldwide are dying off at alarming rates due to rising ocean temperatures and acidity, destructive fishing practices, pesticides, and other chemicals, and a number of other issues, Bermuda protects their reefs better than most. In some parts of the world overfishing strips the reef of fish that eat algae that suffocate corals when given a chance to grow, and fertilizer runoff feeds the algae helping it to grow faster than normal. 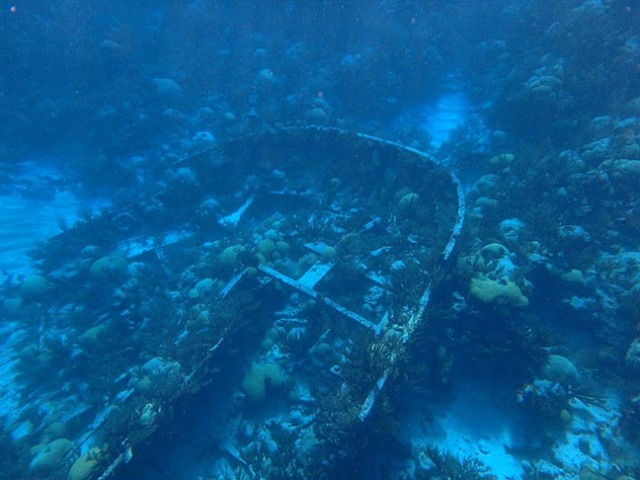 part of a sunken ship

Hurricanes are another threat to the world’s coral reefs. Pollution also harms coral, as does the chemicals and oils in the sunscreen washing off thousands of people swimming in the ocean wearing ordinary sunscreen instead of one that is coral safe. If your sunscreen doesn’t say biodegradable or reef safe on the package then it’s not.

fish near the snorkel boat

You can find coral safe sunscreens online or at the sort of stores that sell herbal supplements and remedies. An amount of sunscreen equivalent to one drop in an Olympic-sized swimming pool is all it takes to harm coral. Many tons of sunscreen wash off people each year. You don’t need to swim in the ocean for chemicals from your sunscreen to end up there either as they can pass through the sewer system. Mineral based sunscreens protect people better from skin cancer so while saving the coral you can also better protect yourself.

Bermuda is a series of islands connected by bridges

According to our guide on the snorkel trip, Bermuda has lost about 11% of their reefs over the last couple decades. Horrendous as that is, it is much better than some areas in the Caribbean that are up to an 80% loss. Bermuda’s coral is tougher than most as it has to withstand large temperature swings between winter and summer since Bermuda is not in the tropics. That’s not the only reason it has a better survival rate though. Bermuda has all sorts of protections in place for both the coral and the fish that clean algae from the reefs. Bermuda’s signature pink sand comes from dead shells of a tiny short-lived creature that lives on the underside of the reefs.

snorkel boat at the reef

When we got to the site of the wrecks the crew tied the boat to a bouy which both marks the location of one of the wrecks and serves as an anchor bouy so boats have somewhere to tie up to and don’t have to drop anchor and risk damaging anything. The sea was flat calm, which isn’t the norm for that spot as the guide said it usually has a current. Flotation devices were required, with the option of noodles or snorkel vests. Not wanting to wrestle a noodle or have to keep track of it, I went with the vest (with no air in it) as the slightly less annoying way of fulfilling that requirement. Warm salt water is very buoyant. It’s actually much easier to float on the surface than it is to dive under it even without the hindrance of floatation devices, but they have their requirements (probably for insurance purposes) and people have to follow them.

One wreck was just off the bow of the boat, the other off to one side. Coral reefs surrounded the boat and fish swam nearby. The largest concentration of fish were at the ship’s stern due to the fact that they threw food out for them there. In other areas the fish stayed mostly down near the coral, which was far enough under the surface in that area that nobody would accidentally touch it because touching it is against their protective rules. 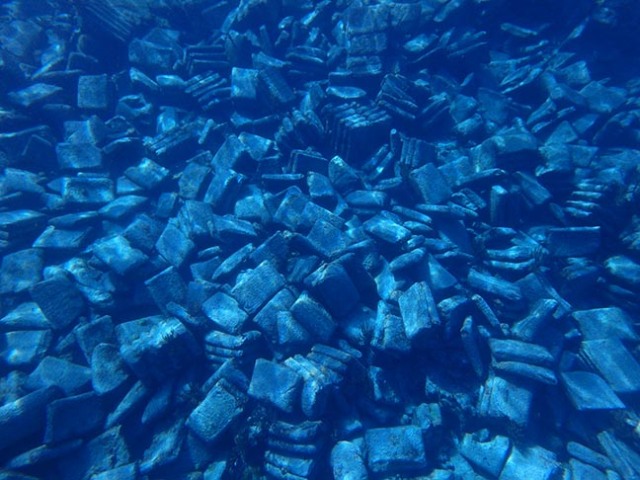 These wrecks have been under the sea for quite some time. Where the wooden ship sank the bags of concrete it carried have spread out looking like a large shelf of undersea pillows. The iron ship is scattered across the sea bottom in pieces. 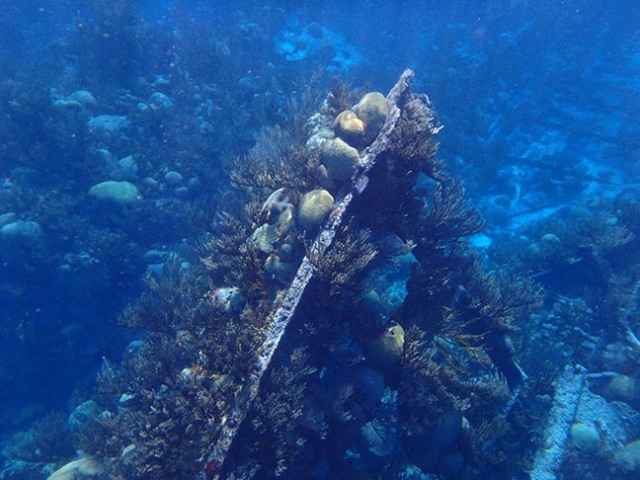 part of the Montana covered in sealife

On the way back to the dock we took a detour in the shallows where turtles sometimes hang out. Some of the reefs there come nearly to the surface so it takes careful navigation between them to avoid hitting any. We didn’t see any turtles that day, but if we had our guide said they would all be young turtles that breed elsewhere. Bermuda once had a breeding population of turtles, but back in the 1600’s in an attempt at conservation they ended up killing them off. They passed laws protecting the small turtles not realizing they were visitors form elsewhere and not local babies who would grow up to breed. The local turtles left for 25 years after hatching and came back to breed when they were large turtles of the size people were allowed to hunt and eat. They tried getting eggs from Costa Rica to re-establish their own breeding population, but even though those carefully tagged turtles hatched in Bermuda they went to Costa Rica when time came to breed – and they were all male because sand temperature around the egg determines a turtle’s sex. Males develop in colder sand, females in warmer sand and Bermuda is not as warm as Costa Rica. With rising ocean temperatures there are places currently having the opposite problem hatching almost nothing but female green sea turtles, which does not bode well for the species once the older generation of males die off since they need both sexes to reproduce.