Hits and Misses on P&O Arcadia

Posted on June 15, 2018 by LBcruiseshipblogger

Cruise ships have a lot of things in common with one another, but they have differences as well. Depending on what any individual person looks for in a cruise they are bound to find some ships more appealing than others – though it won’t always be the same ship since one person’s ideal ship is different from another’s. On the P&O Arcadia, we found a lot to like and not much to dislike.

It’s always a bonus when a ship has a self-serve guest laundry. Usually it costs something to use, but you can wash more clothes for less money than sending them out for the crew to wash for you. The Arcadia not only had guest laundries, but they were free to use, so twice as nice. It could get crowded with people waiting when all the machines are full, but the trick is to do your laundry at times not popular with other guests. 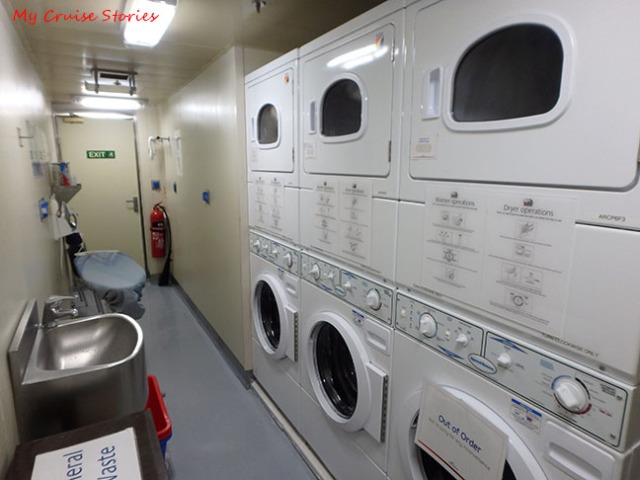 Being a British ship, the Arcadia had a very different menu than what we find on American ships. We quite enjoyed trying a variety of different foods – some of which we had never heard of like Bubble and Squeak or Syllabub. The English couple at our dinner table sometimes had to explain to us and the Australian couple what some menu items were. Dinners also included little extras like the plate of sweet tidbits set out after the regular dessert. I kept hoping to see Harry Potter’s favorite treacle tart on the menu so I could give that a try, but it never showed up. Can’t have everything I guess.

Dinners weren’t the only time food had a starring role on the Arcadia. The British love their tea. Tea time wasn’t just a few tables in the dining room for whomever might attend. Tea time on the Arcadia expanded to the Lido deck as well. People could either go to the dining room and have afternoon tea served to them, or chose the Lido buffet for self-service tea. The Lido’s tea included almost everything served in the dining room plus some other afternoon snacks. The dining room did have crumpets though, which the Lido did not. In both places they served tea cakes, delightful treats I had never seen or even heard of before. They weren’t really cakes, closer to a roll, yet not exactly one of those either. A light and airy bread delicious with cream and jam. Of course the Arcadia always has a good selection of tea flavors as well.

The cabins have an electric teapot and a wooden box with tea bags, instant coffee, milk and biscuits (which in the USA would be called cookies)

Tea was not confined just to public decks on the Arcadia. Each passenger cabin came equipped with an electric tea pot, and a little wooden box with tea, coffee, biscuits (cookies), and milk – which they use in their tea. Rooms other than suites weren’t stocked with flavored teas, but a trip to the Lido easily cured that – and late in the evening packets of hot chocolate were available there as well, which could be taken to the room for future use just as easily as your favorite flavored teas.

We found a new game we’d never heard of on the Arcadia. Every day they held deck quoits competitions. Deck quoits involves throwing little rope donuts at a target on the deck. In the daily tournaments partners were assigned randomly so there were never any specific pairs of people who could win every time. I went from having no clue how to play or score the game at the start of the cruise to actually winning a match near the end. I got lucky on that one both with a skilled partner and an unusual streak of precision in my own throws. We also enjoyed the wii bowling held in a pub each afternoon. Ships always provide some sort of fun and games, but these were things we hadn’t seen on other vessels.

heated ceramic chairs in the spa

I definitely enjoyed being able to wander freely about the inside of the ship without ever running into any smoky areas because the ship had no indoor smoking. We also had a muster station that was uniquely the best of both worlds in a lounge with doors exiting directly to the deck under the lifeboats. Muster drills may have been more miserable back in the days of always being held at the lifeboat stations, but in the event of an actual emergency going to a meeting place in the bowels of the ship where some ships have their muster stations now seems contrary to executing a timely evacuation. So having a comfortable lounge with doors that open directly to the lifeboat stations is the ultimate in good choices for a muster station. In case anyone reading this doesn’t cruise, muster stations are where passengers go in the event of an emergency and every cruise starts with a muster drill so people know how to find their assigned muster station should an emergency situation ever arise.

pool in the thermal suite

We quite enjoyed the thermal suite on the Arcadia. It does cost extra, but we splurged for the full cruise pass – which did not cost anywhere near as much as what some of the other lines charge for it. The ship had no spa cabins so the thermal area was rarely ever crowded and often we had it to ourselves. (Some ships have spa cabins that come with use of the thermal suite.) Originally destined for Holland America, the Arcadia has the same hydro pool and ceramic chairs as Holland America’s directionally named ships (Westerdam, Noordam, etc.)

The Arcadia had tasteful decor throughout, and one especially fun to read and interesting bit – a mural depicting the history of P&O and its ships. Lots of ships have movies, but the Arcadia had a dedicated area for a little movie theater with several rows of comfortable chairs of the sort you might find in a fancy home theater of a house with a room dedicated for just that purpose. It didn’t hold a lot of people at the same time, but many showtimes throughout the day meant that a lot of people could get in to see that day’s movie. People could sign up for in advance for a reserved seat. Each day had a different movie with no repeats.

Really the only major miss I found on the Arcadia is the same miss on almost every cruise ship with an outside promenade deck, particularly one that goes all the way around. That miss is having a smoking area on one side of the promenade deck. A lot of people walk and jog around the promenade deck. It’s a great place to go for exercise. There’s shade, shelter, a continuous pathway, and a great view. If just one person comes out to use the smoking area, then every single person out walking or jogging has to pass through that smoke on each and every lap – not very conducive to good health. Placing the smoking section somewhere in an area where nobody needs to pass through would be a much better idea.

promenade deck on the Arcadia

The only other miss I can think of for the Arcadia is a lack of good breakfast options, but we always managed to find something to eat. The Lido buffet had a lot of stations all serving a full English breakfast. Anything else was pretty scarce, but it is a British ship so maybe that is what they all want. They did have oatmeal, but no fresh fruit or berries or anything to put on it. The waffle station rarely ever had anyone working there. If you did find someone they tried to pull an old cold waffle out from under a counter rather than making a fresh new one – which in itself explains why the waffle station was not very popular. The dining room had a bit more choice, but a revolving menu meant some common breakfast items were only available once a week. At lunchtime where there’s usually a good salad bar at the buffet on American ships the Arcadia had a selection of cold cuts instead, but they did have a lot of other lunchtime options including bowls of salad somewhere in the buffet.

Overall we really enjoyed the Arcadia. If P&O was based somewhere more convenient for us than England we would definitely sail with them again. Perhaps we’ll find another opportunity sometime. A bonus of sailing with P&O is that time spent there counts as loyalty points with Princess.

MyCruiseStories blog tells stories about adventures in cruising on ships big and small. Things to do onboard and in port. Anything connected to cruising. Also food, travel, recipes, towel animals, and the occasional random blog.
View all posts by LBcruiseshipblogger →
This entry was posted in Arcadia, P&O and tagged Arcadia, cruise ship, good things about cruise ships, P&O. Bookmark the permalink.

4 Responses to Hits and Misses on P&O Arcadia