Explorer of the Seas

Posted on November 24, 2017 by LBcruiseshipblogger 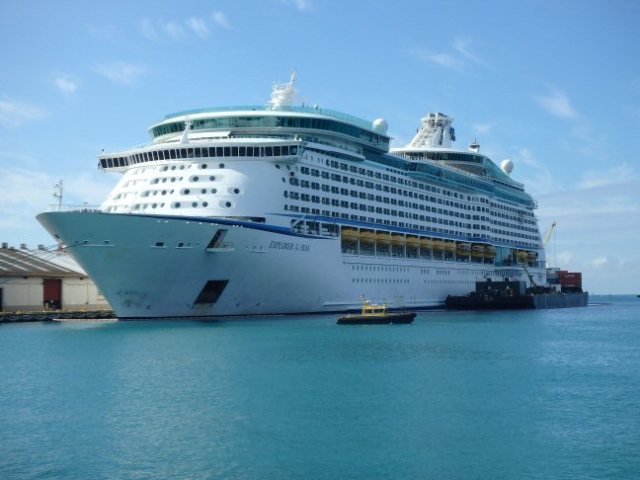 Explorer Of The Seas in Honolulu

Royal Caribbean’s Explorer of the Seas launched in 2000 and had dry-dock upgrades in 2015. The ship carries registry from the Bahamas. Though not one of Royal Caribbean’s biggest ships, at 1020 feet in length, 161 feet in width, and with a capacity of over 4000 passengers and 1000 crew it is still a very large cruise ship. For the first couple years after launching it was the biggest passenger ship in the world, but that destination was soon taken over by new cruise ships of ever increasing size. It’s currently number 26, with 10 of the bigger ones belonging to Royal Caribbean including the top 3 as well as 7 of the top 10.

Flowrider on Explorer Of the Seas

There’s lots to do onboard. Besides the usual cruise ship pastimes of shows, movies, and games, this ship has a rock climbing wall, ice skating rink, flowrider, and mini golf. In addition to a pool deck with two pools and several hot tubs, it also has a solarium with 2 covered hot tubs as well as an outdoor pool. They showed nightly outdoor movies on the pool deck as well as a couple daily movies on the cabin TV and sometimes a matinee in the main theater. Of course the ship has a casino too. 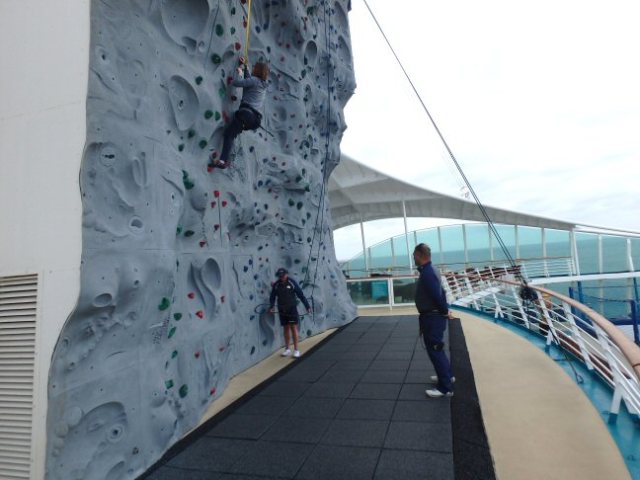 rock climbing wall on Explorer Of The Seas

The rock climbing wall had open times scheduled daily and the flowrider had daily times for stand-up surfing and times for boogie boarding.

ice show in the skating rink

Throughout the cruise the ice arena had several open sessions for passengers as well as an ice show. The main theater had a different show each night. In addition to several production shows with the onboard cast they had a variety of guest performers ranging from singers or musicians to comedians to magicians and even a juggler.

Jaffa Cake – one of the dining room’s tastiest desserts

Explorer of the Seas has many food options. Besides the Sapphire Dining Room and Windjammer Marketplace buffet it has a 24-hour café, several premium restaurants, and quite a few bars. The specialty restaurants on this ship are Giovanni’s Table (Italian), Chops Grille (steakhouse), Izumi (Asian Cuisine), and Johnny Rockets (burgers). 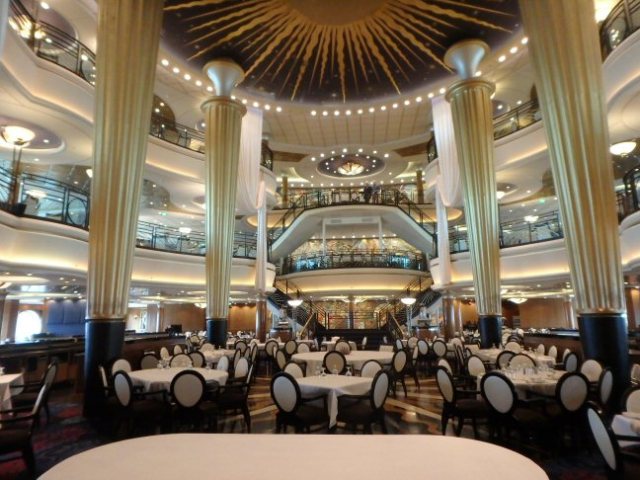 When you’re onboard, the right look will vary by venue. But here are a few types of suggested attire you’ll see, grouped by item.
Casual: You’re on vacation – relax! Jeans, polos, sundresses and blouses are all the right amount of laid back. Please keep swimwear to the Pool Deck. Shorts are welcomed for breakfast and lunch.

Formal: Make it a night out in your best black-tie look – suits and ties, tuxedos, cocktail dresses or evening gowns. There can be 1-3 formal nights during a sailing and is at the ship’s discretion.

Please note that bare feet are not allowed at any time in any venue and tank tops are not permitted in the Main Dining Room or Specialty Dining venues for dinner.

Royal Caribbean Casual Nights by Venue – not all venues are available on all ships. 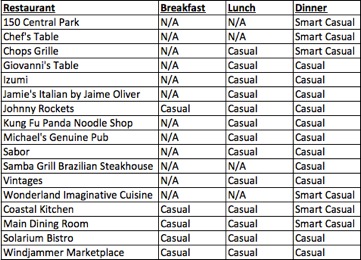 Dress codes on our cruise on the Explorer were worded in their daily newsletter (called the Cruise Compass) as tonight’s dinner dress suggestion, followed by formal or casual so dressing up for formal nights was not actually required. Most people did wear nicer clothes than on casual nights, but nothing too fancy.

one of Explorer’s two atriums

This was our first cruise on Royal Caribbean and the ship had quite a different design than any we’ve been on previously. Rather than just one atrium area it had two. Both stairway and elevator sections had a set of glass elevators and an open area nearly to the top of the ship. Each deck had a few seats with views into the atrium/centrum areas. Some had little balconies near the elevators. In between the two atriums on decks 4 and 5 it had their Centrum central area with a variety of public places like shops, bars, and eateries.

overlooking the Royal Promenade from the front end of the ship

Other than the front desk and shore excursions desk, most of that central area on deck 5 held the Royal Promenade. This part looked something like a city street complete with shops on that level and apartments rising above on both sides. What looks like apartment buildings is actually windows to interior cabins with a view of the promenade.

Johnny Rockets burger place up on an outside deck

Besides shops and a pub, deck 5 had a 24 hour café with free food and basic drinks and an extra cost for specialty coffee or Ben & Jerry’s ice cream. At lunchtime there was always some sort of food served in the street area near the café, which varied daily from things like tacos or pulled pork (or chicken) sandwiches.  Deck 4 had a pub, the casino, and Giovanni’s Italian Restaurant.

café on the Royal Promenade 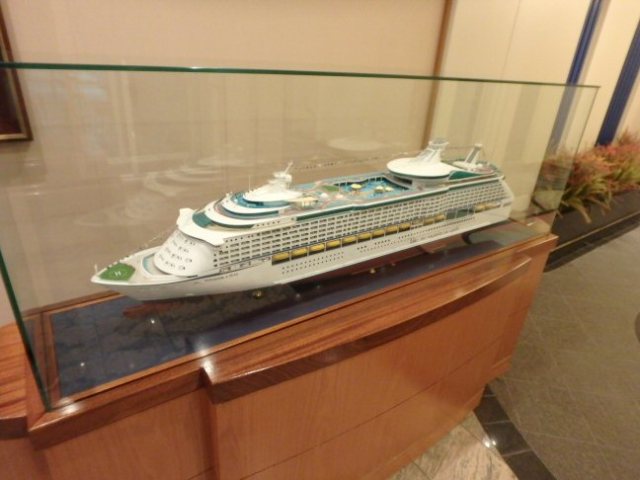 Carpets could help a bit finding your way around the ship in that they have a tendency to change to a different color in the hallways of the guest cabin areas when coming to a place where you can turn and either find an exit or go across the width of the ship at least for a bit rather than just going down the length.

The ship has 2 main stairways with a different style of art on each. Artwork on the front stairway is either of or by famous people. Just because they are famous for whatever reason doesn’t mean their art is any good, but it is displayed there anyway. Artwork on the back stairway is more of an abstract thing. Much of it is representations of tides or nature – of which you have to read the plaque to know that because it isn’t obvious in most of the art. Not having sailed with Royal Caribbean before, I found the models of their various ships in glass cases placed around the ship to be one of their most interesting types of art.

find anything on board

Carpet colors and art styles weren’t needed on this ship as a means of finding your way around. Near each stairway and elevator area on each deck it had electronic touch-screen wayfinders. Besides your current location these handy digital devices could also tell you at a touch everything from the menu at different eateries to what was happening where and when. If you found somewhere you’d like to be it could also give you directions on how to get there from wherever you were at the time.

There is no indoor smoking which is nice. Outdoors not so much. One side of the main pool area had smoking allowed as well as a smoking area on a platform in front of a bar at the center of the deck above, which made the pool deck area pretty smoky. The solarium was non-smoking, but since the door on one side opened directly into the smoking area of the pool deck really only one side of it was useable for anyone not wanting to breathe cigarette smoke.

solarium pool is open to outside, but hot tubs and the most popular deck chairs are covered

Luckily the gym opened at 6am rather than the 8am opening time of a lot of ships. Most ships have somewhere to walk or run outside, but on the Explorer one side of the open area of deck 4 had smoking allowed and the track ran just above the smoky pool deck area as well as right past the bar with the smoking platform. This left no good outside places for people to walk or run while breathing clean air. Probably why the treadmills were always full just a few minutes after the gym opened.

sculpture on the top deck

This ship has no guest laundries and sending laundry out for the crew was quite expensive so people were pretty creative with handwashing clothes in their rooms on our 22 day cruise. It did have magnetic walls in the cabin, which always helps to keep paperwork organized if you bring magnets. Magnets are also useful for people who like to decorate their cabin door.

We quite enjoyed Royal Caribbean and would be happy to sail with them again. One of their megaships with Central Park on the inside and waterslides snaking all the way down the back has been on my bucket list for awhile.