Posted on October 20, 2017 by LBcruiseshipblogger

Usually cruise ships tie up to a dock on port stops, but sometimes they anchor offshore. When the ship anchors it is called a tender port because people move from ship to shore in smaller boats called tenders. Each ship carries several life boats different from the rest that they can drop to use as tenders. Tender boats are taller than the standard life boats and have double catamaran style hulls and two propellers. Ordinary life boats have a single V-style hull and one propeller.

ready to lower the tenders into the water

Some frequently visited ports send out their own larger island tenders, but at ports like Bay of Islands in New Zealand the ship uses their own. On most of the ships we’ve sailed on the tender just pulls up alongside the ship, but the P&O Arcadia had little docks that folded down from the side of the ship to tie the tenders to. Quite clever actually.

The tenders let passengers off at a yacht club between the town of Paihia and the Waitangi Treaty Grounds. A scenic walk along the shoreline led to the treaty grounds, which had an admission charge to go inside.

From outside the fence you could see a shed with large canoes and a café. The entrance was in a building that looked like a museum. The treaty grounds is the place where the Maori signed a peace treaty with Great Britain in 1840.

A free shuttle took passengers from the yacht club to nearby Paihai. This historic town has plenty of shops and restaurants for tourists. It also has lots of different places offering tours of all sorts. People can go fishing, parasailing, dolphin watching, take a helicopter or bus tour, take a day cruise, visit caves, or at times go snorkeling or diving. Bus tours around the area start at $20, but some of the other things can get pricey – especially the helicopter.

coming into Russell on the ferry

A ferry runs to Russell for $12 round trip for adults. Russell was once called Kororareka, an early whaling settlement. It is one of the oldest towns in New Zealand and has the oldest hotel. It was once a wild place full of sailors, whalers, and escaped convicts from Australia.

Russell also has shops, restaurants, and places to book tours of all sorts. It has a couple museums too. We took a short bus tour. The driver said the permanent population there is quite small with most of the homes being holiday houses for people who just spend a few months there each year. We passed a hotel in the distance where the rich and famous stay in rooms costing up to $19,000 per night.

We got out on Flagstaff  Hill, which would have had great views had it not been a cloudy, misty day with rain off and on. One path led to an oversized mosaic sundial. The other path led to a flagpole that had a history of Maori’s knocking it down and English putting it back up.

Things to do in the Bay of Islands

Bay of Islands is a maritime park with 144 islands and lots of beaches, bays, and sea life. Shore excursions from our ship included Waitangi and Countryside, Cape Brett Cruise, Rural Drive and Waipoua Forest and The Maori Experience. We saw some passengers on the Maori Experience heading off from the yacht club in a couple of double canoes. An older Maori guide on one of the canoes wore a loincloth and nothing else but tattoos. The rest of the guides wore just a bit more clothing.

Cruising to Bay of Islands –  Things to Do On Your Own 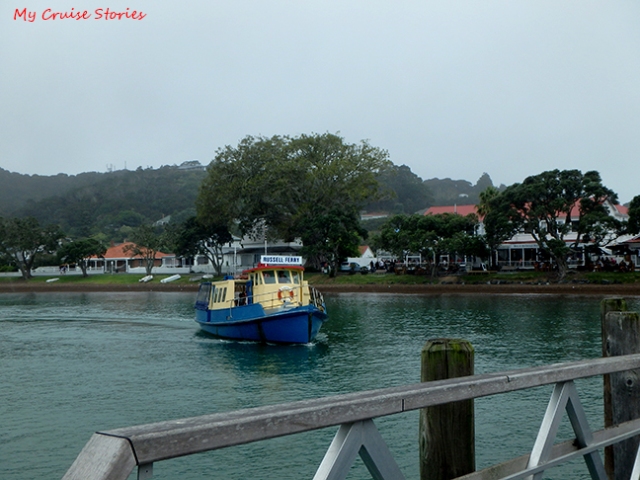 ferry from Paihia to Russell

People who come to Bay of Islands without prior plans will have no problem finding something to do. They can stay at Waitangi and visit the treaty grounds or make their way to either Paihai or Russel and choose from the plethora of tours offered at either town or just explore on their own.

MyCruiseStories blog tells stories about adventures in cruising on ships big and small. Things to do onboard and in port. Anything connected to cruising. Also food, travel, recipes, towel animals, and the occasional random blog.
View all posts by LBcruiseshipblogger →
This entry was posted in Arcadia, New Zealand, P&O, Ports of Call and tagged Arcadia, Bay of Islands, New Zealand, P&O, Paihai, photos, Russell, travel, vacation. Bookmark the permalink.