Posted on August 18, 2017 by LBcruiseshipblogger

The mostly rural country of New Zealand has a big bustling city in Auckland. P&O Arcadia made a port stop there on one leg of a world cruise, docking at Queens Wharf where some passengers disembarked, others embarked, and the rest just enjoyed a day in port.

Devonport is just a ferry ride away from Auckland

We hadn’t made any plans in Auckland, knowing we would find something to do when we got off the ship. People from the hop on hop off bus tour handed out maps to passengers on their way to the port exit. Of course they hoped people would take their tour, but when asked they gave out information on other local things like the nearby ferries which go to a number of different places.

While on our way to the ferry dock we passed a stand with some brochures. Mostly for the hop on hop off bus, but mixed in there we found one for Kelly Tarlton’s Sea Life Aquarium. The brochure had a picture of a shark bus, which it said was a free shuttle that would take people there. We decided to go after we got back from Devenport, a short ferry ride away. The ferry cost $12 per person, New Zealand Dollars.

Crossing the water to Devonport we sat in the outside seats at the back of the ferry and got some photos of the ship. Devonport is a charming little town with a beachfront walkway and lots of older buildings with shops and restaurants. Across the street from the beach we found a park with some giant trees. One had roots growing down from some of its branches that were bigger than the trunks of some ordinary trees, but nowhere near the massive size of the tree’s main trunk. The other had giant roots protruding from the ground like tall thin snakes. The sounds of fun and laughter came from mothers and small children at the playground there.

We bypassed the port building on the way out, but walked through on the way back to the ferry. It had quite a few shops and a segway rental booth. Once we returned to Auckland and disembarked the ferry we walked up to the main road (Quay) and happened to be near the corner with Queens Street thinking we should try and figure out where the shark bus stopped when it suddenly appeared across the street.

Luckily the light turned green for pedestrians and we made it across while other people were still boarding. From the ship if you dock at Queen’s Wharf, take a right when you get to the road (which is Quay) and cross at Queen’s Street. The shuttle stops hourly across from the ferry building, just a short distance from the corner at Queen’s Street. If you have New Zealand cash you can also get to the Aquarium and back by public bus, which stops at the corner on Queen Street. The Aquarium cost $39 NZD per adult. The shuttle left the Aquarium for the return trip at 20 minutes past the hour every hour, but I’m not sure what time the pick-up was. It’s about a 10 – 15 minute drive. It holds 21 people and was not full either direction when we took it, but the driver did say if more people than that wanted on the best bet for anyone beyond the 21 would be the public bus. 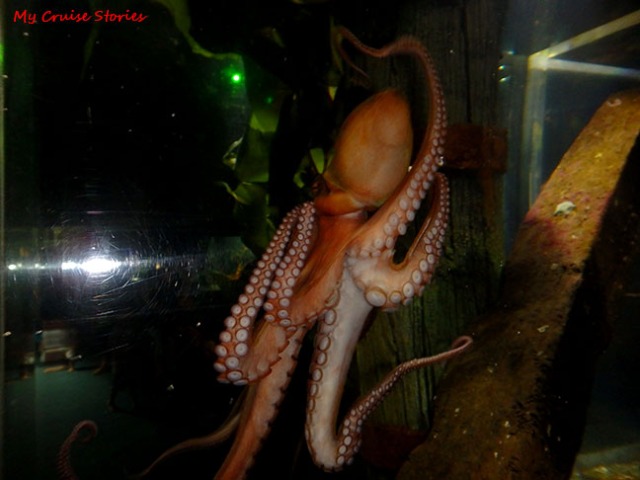 octopus at the aquarium

The shuttle stopped by the entrance, which looked more like a bus stop than an entrance. He did say that they could exchange US dollars for NZ dollars inside if we needed bus fare for the return trip. Good to know if we had not found space on the shuttle.

penguins had water and ice in their habitat at the aquarium

The first exhibit was about early Antarctic explores, which led into the penguin habitat. First we had view windows into their swimming area, full of lively black and white penguins. Beyond that many penguins hung around the icy shore. They had large King Penguins decked out with orangy gold highlights to their black and white tuxedos. Most of those stood regally or slept with their heads tucked down. The smaller, less colorful Gentoo penguins slipped in and out of the water and wandered quickly about the ice.

conveyor through the sharks and other big fish

The other highlight of this aquarium besides the penguins came in the form of a conveyor belt through clear tunnels which had all manner of sea life swimming on either side and sometimes over the top. It was the first aquarium to use curved acrylics in their tank construction. One area held sharks, another large fish and even larger stingrays. We even saw a turtle swim overhead in one of the tanks. Some held lobsters big or small. You can ride the conveyor belt around as many times as you like, or step off of it onto the solid path, which you can also walk on if you prefer. The shark tank had lots of divers in among the sharks when we went by. 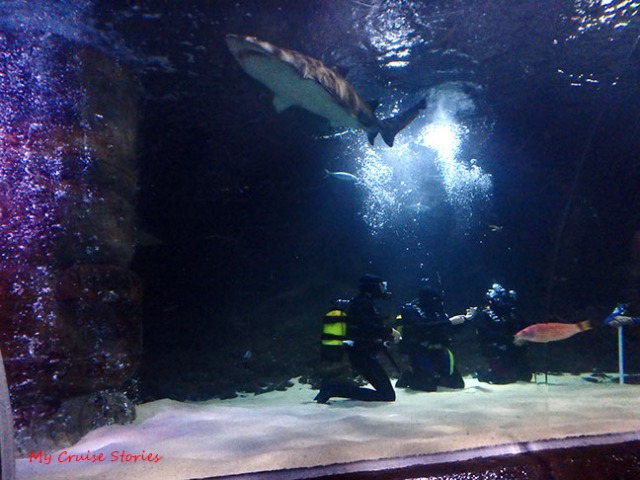 divers in the shark tank

There are tanks of different types of jellyfish, sea horses, and some sea dragons which resemble a sea horse without the curled tail. A small coral tank had brightly colored fish including ones that looked like Dory and Nemo. You can get underwater photos of all sorts of sea creatures without getting wet – although they do offer a shark cage snorkel or cage free shark dive for an extra charge (dive training and equipment provided.) They recommend booking that online in advance.

window to the sea in the Aquarium cafe

The aquarium also had a café, which had windows out to the bay of which the lower edge sat below the waterline. At the end (of course) it exits through a gift shop. 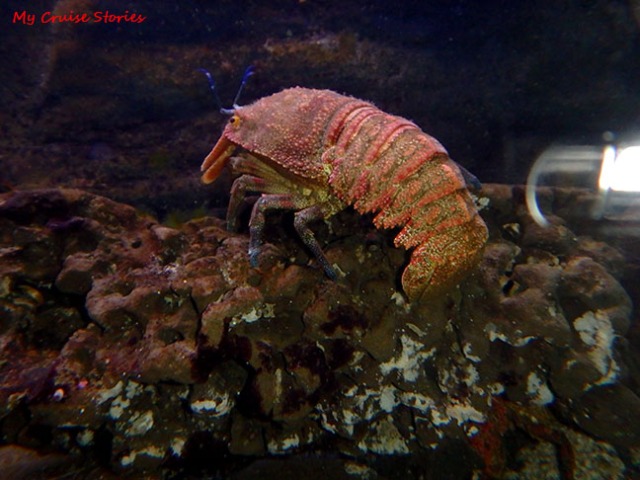 lobster at the aquarium

The aquarium opened in 1985 after 10 months of construction and used abandoned sewage tanks buried along the waterfront that hadn’t been used since the 1960’s as a base for their tanks, to which they added the acrylic panels for viewing.

Things to Do in Auckland

Auckland skyline from the ship on approach to the dock

Exploring Auckland On Your Own From A Cruise Ship

Besides the ferries, aquarium, and hop on hop off bus mentioned earlier, there are lots of other things people can do on their own in Auckland. There are plenty of shops and restaurants near the ship. The Sky City Tower is within walking distance. Ride up to the top for a view or a meal, and for the really adventurous, bungee jumping. You can also find an art gallery and a museum relatively close to the ship. If you haven’t had enough of being on a ship, harbor tours are another option and come in quite a variety of choices.