Posted on February 17, 2017 by LBcruiseshipblogger 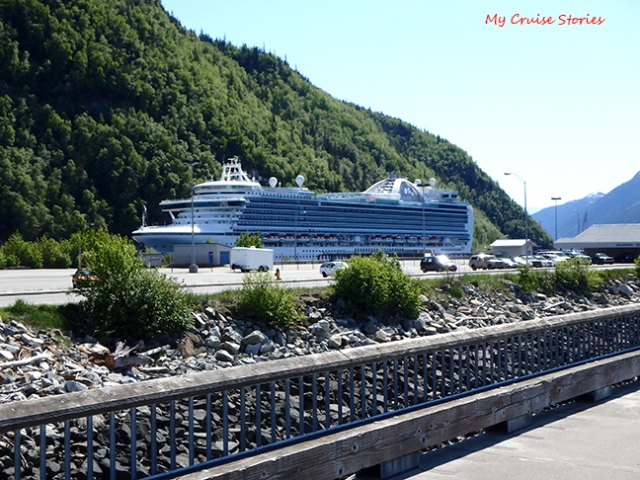 Ruby Princess docked at the Railway Dock on the opposite end of the harbor from where the Norwegian Sun was at the Ore Dock on my last visit to Skagway. In between those two docks sits the Broadway Dock. The Railway Dock holds two ships so 4 cruise ships can dock in Skagway at the same time. We were the only ship in town that day on the first cruise of the season in early May. All the docks are just a short walk from town. There’s a park and public boat launch between the ship and town from the Railway Dock.

If your ship leaves from Seattle a visit to the free Gold Rush Museum in Pioneer Square before you board makes a great start for an Alaska cruise. Skagway bound ships left from Seattle during the gold rush era. People stocked up their supplies there. The museum has a lot of  the history and some artifacts from that era and it all ties in with things in Skagway. When I went there they had a wheel of odds you could spin that showed what a very small percentage of people actually got rich from the Alaska gold rush, and of those an even smaller amount managed to hold on to their money. More people made money selling things to the miners than from mining and not many of the few who did strike it rich spent wisely and stayed rich to the end of their days. All the good claims went to locals before the first ship of gold hit Seattle so most of the gold rushers from other places were doomed before they started. 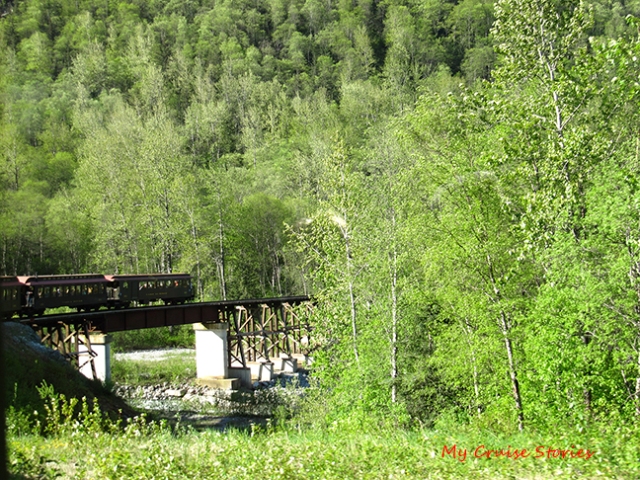 the tail end of the train crossing over a bridge

The most popular excursion in Skagway is the White Pass Train, which would have saved the miners a lot of grief and many horses their lives had it been built before the gold rush started rather than because of it. They had to get to Canada to get to the gold, but weren’t allowed to cross the border without 2000 pounds of goods, which they had to take up the mountain to reach the border. 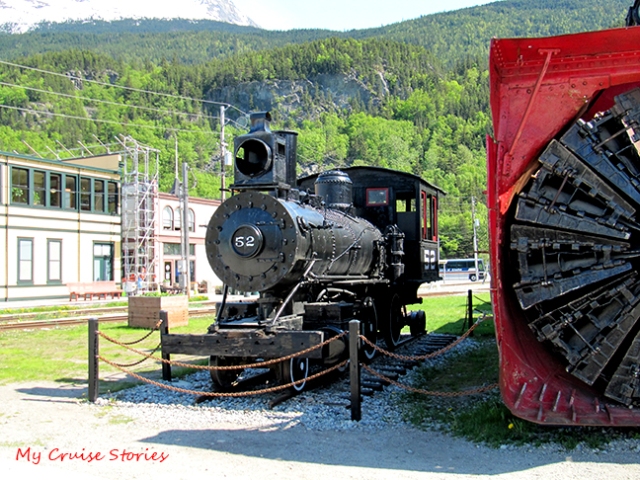 steam engines like this one one pulled the trains

Miners started out either from Skagway over White Pass or nearby Dyea over Chilkoot Pass. The two towns competed for gold rushers. Many crossed each pass until an avalanche killed 63 people near the summit of Chilkoot Pass. That and the completion of the railway in Skagway eventually left Dyea abandoned. The townsite now lies within the boundaries of the Klondike Gold Rush National Historic Park, but little remains of the town beyond some foundations, a few ruins, and 3 cemeteries, one of which holds mainly victims of the avalanche who all died the same day.

The gold rush ended shortly after the completion of the railway, but it was used to haul freight and passengers until1982 when the railway shut down. It reopened as a tourist attraction in 1989 and remains the most popular shore excursion in Skagway. 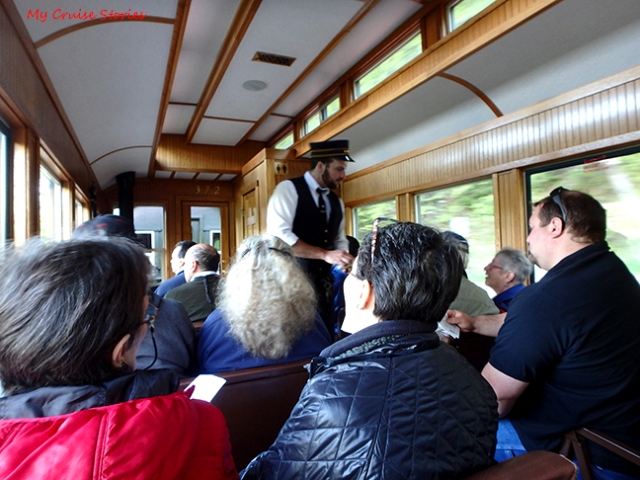 inside the White Pass & Yukon Railway – with conductor

People can take a train one way and a bus the other and go farther up into Canada and actually get off the train, but the most popular excursion goes up the mountain just across the border and then back down. The train picks passengers who booked through the cruise line up right at their ships regardless of which dock they are on. One car on the train had a wheelchair lift making this excursion accessible to all. If there is more than one ship in town they each have separate trains. The railway also has a station in town where other tourists board a train that leaves from there. Cruise ship passengers can disembark either at the depot in town or back at their ship. Passenger cars are either restored originals or replicas, but the engines are diesel powered rather than the original steam engines. 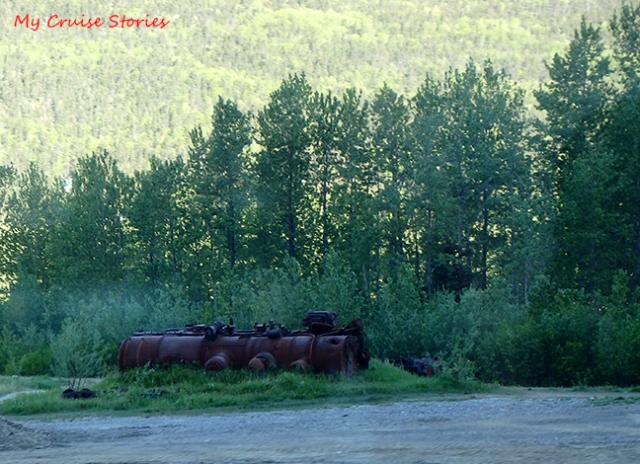 old rusty engine lying on its side at the train yard

The train ride starts on level ground through the edge of town and past the train yard before heading up the mountain. When we took this journey about 7 years ago my grandson (who was 6 at the time) thought an old rusting derailed steam engine lying next to the tracks shortly out of town was the most interesting part of the whole trip. We saw an old rusting steam engine lying on its side at the train yard this time and did not find the one lying by the tracks. We speculated that it could be the same one and after all the time it spent lying next to the tracks after derailing someone finally removed it. It could have been considered an environmental hazard, or perhaps the nearby river has changed course and someone worried it might end up in the water. Or maybe they decided to rescue and restore it. Could be we just looked away at the wrong moment and missed the derailed train and the one in the yard came from somewhere else too.

The first sight on the train tour is the old graveyard where the town’s notorious character Soapy Smith and Frank H. Reid who both died in the same duel after shooting each other are buried. Someone looking for a good hike could walk to the cemetery on the trail adjacent to the tracks. 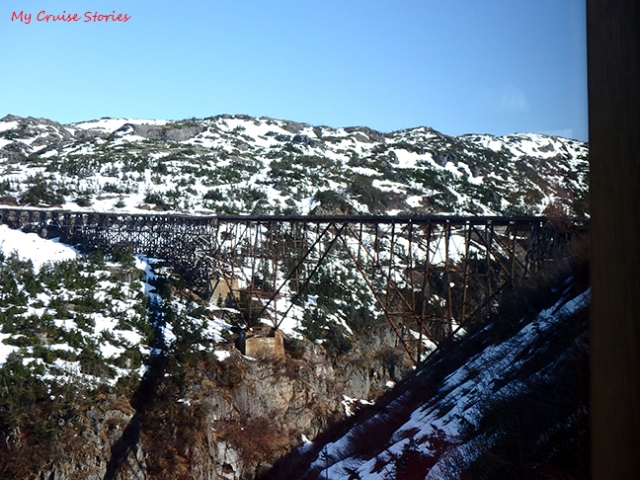 The current track bypasses this old bridge. Once an engineering marvel, now a deteriorating wreck.

Other sites along the way include remnants of a toll road which predated the train and the black cross on a boulder that killed two railroad workers and their pack mules after a dynamite blast went awry during track building. The enormous chunk of rock unexpectedly flew through the air, landing on them and crushing them instantly. The bodies are still there, under a rock so big it would just blend in as part of the natural landscape were it not for the black cross on top. 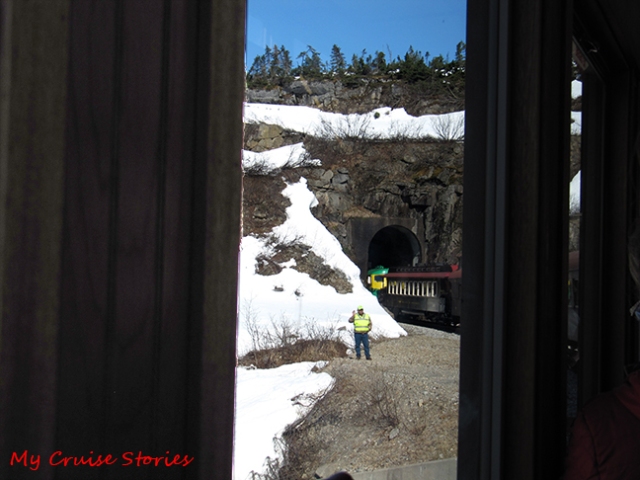 the train enters a tunnel

The train passes through a couple tunnels and over several bridges, but not the old wooden trestle bridge which was once an engineering marvel. That immense bridge now sits deteriorating alongside the current track which bypasses the original, replaced by a tunnel and a much smaller bridge in a far narrower crossing nearby. 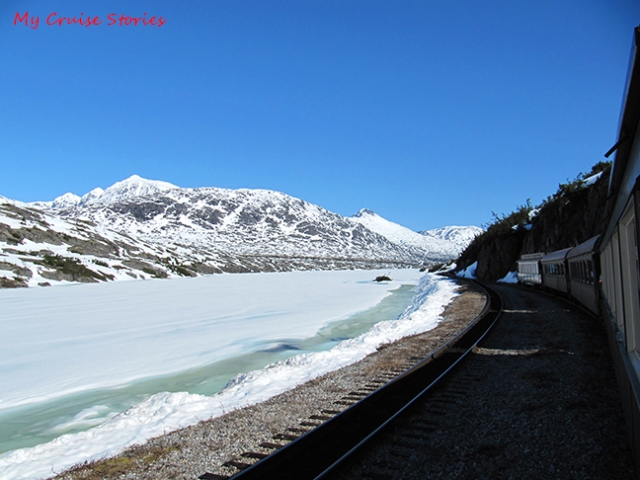 there was still snow at the top of the mountain

At one area they explain why White Pass was often called the dead horse trail as it was once lined with the overworked and underfed horses who often fell 500 feet to their death there. These horses were worked to death by would-be miners who used them to pack the required supplies up the mountain, then sold them to the next guy when they got done. Over 3000 horses and mules died there. The bones of many still remain where they fell in Dead Horse Gulch.

Near the top of the mountain a portion of the actual trail used by gold rushers parallels the tracks for a stretch, marked by a lone small sign. 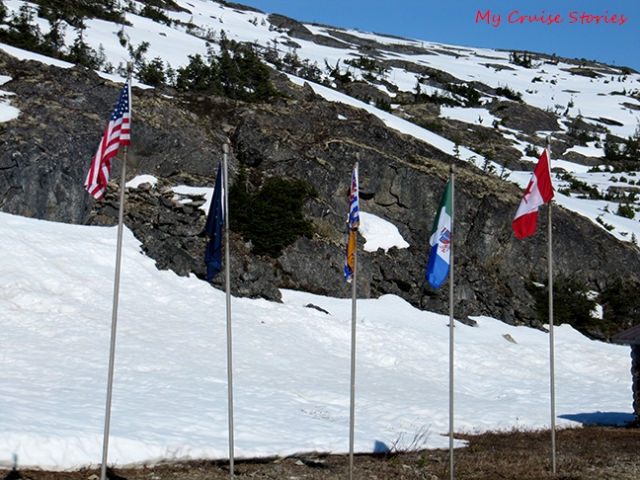 there’s nothing much at the Canadian border besides these flags

At the top the train stops and waits for any other ascending trains to arrive so all can descend the single track without running into any trains moving in the opposite direction. The engineer unhitches the engines and moves them to the opposite end of the train on a parallel track and the passengers flip the seat backs to the opposite side of the seats so the back becomes the front and they can face forward on the way down. Passengers are also asked to switch sides so those on the mountain side can see the valley views on the way back down.  (The left side of the train on the way up which becomes the right side on the way down has the best view in both directions.) The train cars that started out at the front end up at the back on the way back down. 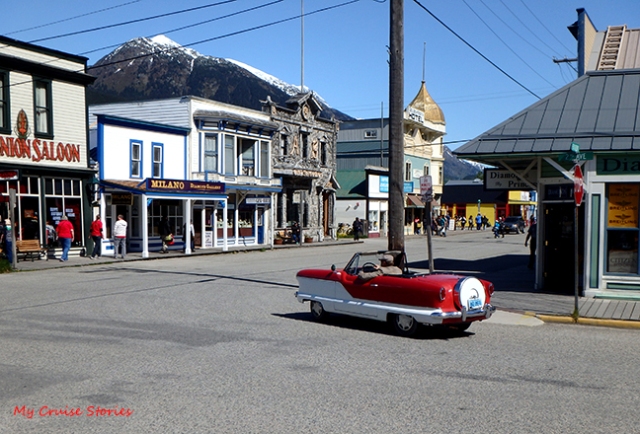 Skagway shops near the cruise docks

Skagway is not a big town, but it has shops and restaurants, a playground or two, and  a few museums. A lot of work was going on to restore some old buildings and a park so it looks like more may come for the future.

For those who didn’t book anything on the ship and would like to do something besides wander about town There’s also a trail and several shops offering a variety of tours. I did not see any of the signs about town offering last minute tours we had seen there before, but we were also the first ship of the season. 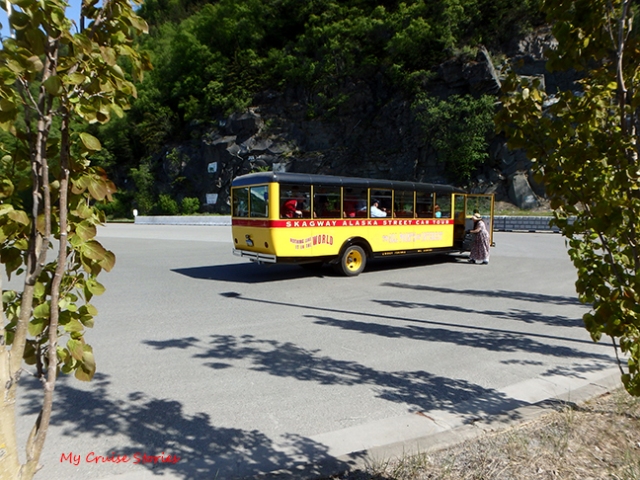 If you don’t want to ride the train, or have already done it, other things to do in Skagway include a city tour, trips up the mountain by road with different activities depending on which one you pick, salmon bake, gold panning, suspension bridge, sled dogs, native culture and bald eagles, jeep adventure, bicycling, hiking, kayak, helicopter, fishing and glassblowing. 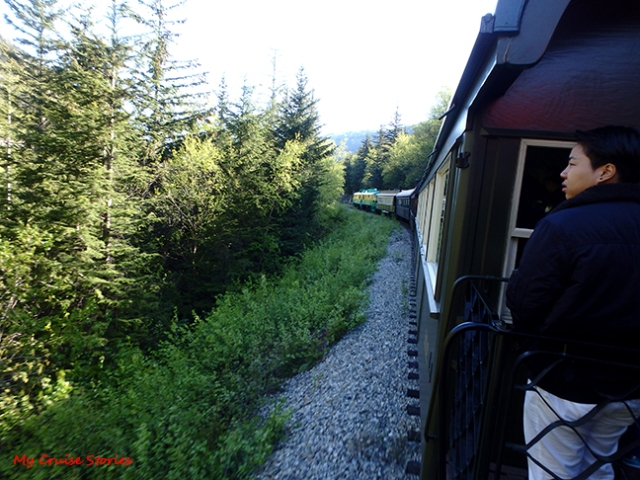 MyCruiseStories blog tells stories about adventures in cruising on ships big and small. Things to do onboard and in port. Anything connected to cruising. Also food, travel, recipes, towel animals, and the occasional random blog.
View all posts by LBcruiseshipblogger →
This entry was posted in Alaska, Ports of Call, Princess, Ruby Princess, Shore Excursions and tagged Alaska, cruise, historic train, narrow gauge railway, photos, Princess, Skagway, travel. Bookmark the permalink.