Posted on August 17, 2016 by LBcruiseshipblogger

view from the Promenade deck

Although we’ve always enjoyed the company of the friends we’ve met at the table on set time dining, when cruising with my husband we usually opt for the anytime, your time, freedom, or whatever a particular cruise line calls their dining program where you can show up anytime within the given hours for dinner. On the Ruby Princess my sisters and I opted for the Anytime Dining program there too. One of the dining rooms served anytime dining through the whole dinner period and another served early seating first and then opened for anytime later while the third dining room did just set time dining with an early and a late seating. Not having the same table or waiters never matters when cruising with my husband, but neither of us has any special dietary needs.

On the first night on the Ruby Princess my sisters and I went to the dining room that opened first for anytime dining, but not right at opening time. When we got there we found out that the wait there was longer than the time until the other dining room upstairs opened for anytime dining so we went there instead, planning to go back to the other one at an earlier time the next day. Since both my sisters are gluten free they asked the waiter what was safe for them to eat. They had a gluten free chicken dinner on the every day side of the menu that is always available, so they both ordered that for the first night. 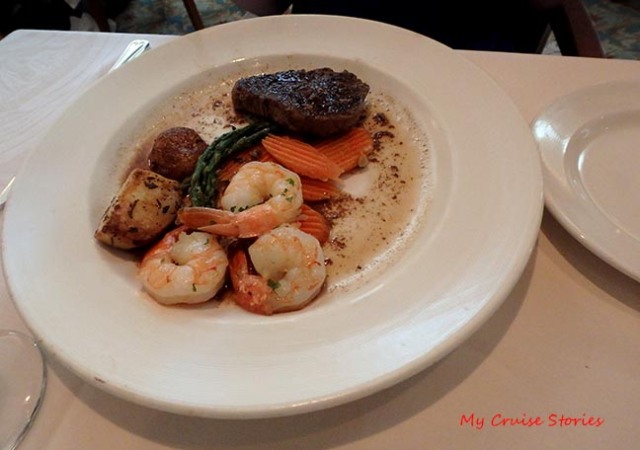 my sisters ate well with meals like surf & turf

The head waiter came by later with menus for them to choose something for the next night that would then be made gluten free. He said to come back there, but we said we really wanted to eat earlier so had planned on going to the other dining room. He said to come to his dining room 25 minutes after the early seating started and he would take care of us. He meant the time exactly too because when we came a bit earlier just to check in with him he seemed a bit flabbergasted, probably thinking we expected him to seat us right then. We left for a few minutes and came back at the proper time, making sure to always show up at exactly the specified time from then on.

Although the ship offered options for the anytime dining, for people on special diets that order their dinner the day ahead the wait crew need to keep track of who orders what and when and where to serve it to them. Because of that, set time dining is a better option for anyone on gluten free or other special needs diets since you have an assigned table there.

one day both sisters tries the escargot

The head waiter took good care of them. He brought the menus around each night and took their orders, then sat us somewhere within the same waiter’s section each night. The timing on when he wanted us to come was because he had to wait until the time passed for the people on set time to arrive if they were coming and then he’d put us at a table where they didn’t show. We had the same table all but one night, so its assigned occupants must have chosen to eat either at the buffet, the 24-hour cafe, or at one of the premium restaurants most nights. It worked out well for us. The start time was good for us and we always got right in at a time when there was never a line since early seating had already started and anytime at that restaurant was still a long way off. 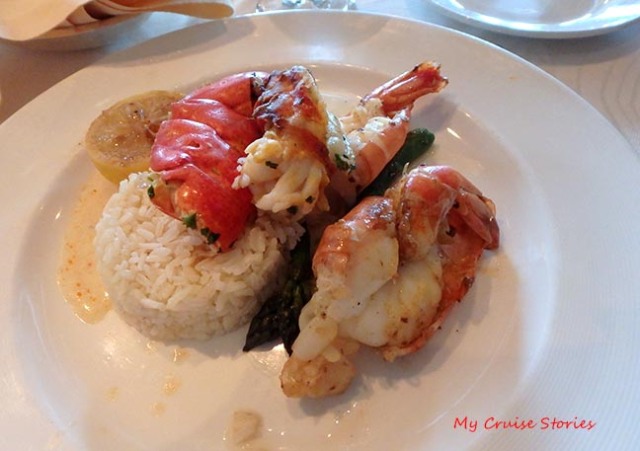 lobster was on the menu one night

On the last night we told the head waiter we planned to go to the afternoon tea and skip dinner as the ship stopped in Victoria that night and dinner would run too late. He didn’t seem to want us to go to tea rather than dinner and produced a menu too good to pass up on. He said they were starting dinner early that day since a lot of people would want to get off the ship. He gave us an earlier start time, which was about 15 minutes before the dining room was scheduled to open. Since they had made all dining rooms anytime dining for that night when we got there quite a line had already formed. We worked our way up near the front of the line. Amazingly enough we went quite a ways through the line before anybody already standing there said anything. One of my sisters said we had an appointment and kind of quickly explained on the run about gluten free diets. We got near the front of the line, but had not quite gotten to the check in point yet when the whole line suddenly started pouring in through the door. They must have let in another special needs party and gotten mobbed by an impatient crowd they weren’t ready for following them in because as we got to the door the host told us to run to our usual table before someone else snagged it. We made it to the table and were rewarded with steak dinners for my sisters, turkey for me, and baked Alaska for everyone for dessert because they had made a special gluten free one. We quite enjoyed the food on the Ruby Princess, it was very good.

on the last night they had steak

One day we did go to the tea, but did not make any special arrangements in advance for my sisters. They had just planned to pick whatever they could eat off of what was served and not trouble anyone for special food. The head waiter spotted them there and panicked about them having a reaction if they did that. He said that would never do and had something special brought up from the galley for them. Some people with gluten issues like celiacs are sensitive enough that they will have a reaction if their food touched anything with gluten in it, but while gluten will make my sisters ill, they are not celiacs.

We had breakfast at the buffet most days and they had no trouble finding food they could eat. The one day we had breakfast in the dining room they discovered gluten free pancakes on the standard menu, which one sister ordered and liked quite well.

My older sister discovered a gluten free dessert at the buffet’s late night selection one day early on in the cruise, which she quite enjoyed. After that though we were far from needing anything else to eat, we went up to the late night buffet for 2nd dessert so they could try another new gluten free option since it changed to something different each day.

It’s not possible for any cruise ship to come up with an alternative menu that would serve the needs of everyone with special diets since what a given person can or can’t eat varies so much from one to another. Instead they have the passengers with special needs diets view the next day’s menu each night at dinner and the chef alters the selected meal to fit within that person’s diet. They did this with all the dinner courses, but my sisters never knew what they would get for dessert. They always got something. It was never the same as what the late night buffet had, but was always a version of one of the dining room desserts on the menu that evening. Princess has great food and even people on special diets can eat well onboard. They do ask about that in the registration process so they know before you arrive that you will have special needs.