How to Win a Ship on a Stick

Posted on June 3, 2016 by LBcruiseshipblogger

Love them or hate them, the prize for many of the games on Carnival’s ships consists of a plastic ship trophy with the ship’s name on the base, commonly called a ship on a stick. The people who covet these trinkets seem to far outnumber those who wish for a “better” prize. Some passengers go to great lengths to acquire one.

I can’t remember what they called this game of trying to throw very small discs into a little can in a box. We did not win at it, but the more things you try the better chance of winning something.

Many passengers play the shipboard games for fun, without that much concern over whether they win or lose. Some play for something to do. Others walk by and see a game in progress and decide to give it a go. Rumor has it a hardcore crowd exists that will go so far as to cheat in trivia games to gain possession of the much sought after ship on a stick.

John won a medal in Ladder Golf on the Legend

For the most part my husband and I can entertain ourselves. When cruising alone we never tend to join into any activities likely to offer the prized ship on a stick. Sometimes when we have other relatives along we join into the games. We’re not geniuses, nor do we have any real athletic talent. We’re not cheaters either. Yet we have managed to come home with a ship on a stick and some medals from each of the Carnival cruises we took with other family members on the Splendor and the Legend and other than that we’ve never tried.

On the Splendor group games tended to have mostly medals with one ship on a stick for the winning team. Individual games often just had the ship trophy for the winner. We even played a super duper trivia game that had two sessions with accumulated points and gave out bottles of champagne and other liquor as well as a ship on a stick and maybe medals too. They gave all the loot to the first place team and it wasn’t us so I’m not sure what all they actually got or how they divided it up.

Sheri with her basketball medal

On the Australian cruise each game had medals for prizes and people had to win two medals to trade in for a ship on a stick. This due to the crew having difficulty getting enough ship trophies sent to them in Australia so they had to use them sparingly.

The more games you go to the better chance you have to win, but you can up the odds by going to things you are good at or things not likely to have a big attendance.

Ship on a Stick

On the Splendor we tried a scavenger hunt and a group trivia game where none of us got a ship on a stick. Then one day I spotted Harry Potter trivia in the Fun Times and figured I’d have a pretty good chance at that. I talked my grandson Justin into coming with me even though he’s never read the books or seen the movies. I thought I’d get all the questions right, but the mind kind of goes blank when faced with a very short time to come up with the answer to obscure questions like “What is Mad Eye Moody’s first name?” (I’ll probably never forget that it is Alastor again.) The important thing is that I got more answers right than anyone else and won a ship on a stick.

On the Legend we tried an assortment of games from bean bag toss to ladder golf. Both my husband and daughter managed to win medals in a free throw basketball contest even though we all suck at basketball. The basketball court is far from where the crowds hang out. Unlike other games on the Legend that usually started with just a few players and more saw it and joined in, up at the basketball court anyone who didn’t go specifically for that game probably didn’t even know it was going on. So that’s a great way to win – play something nobody else is likely to go to in a location where they won’t see the game in action.

These games often occurred on port days at a time when not everyone was on board, making it even easier to have no competition. Which brings up another suggestion – if you happen to be on board while any games take place when the ship is in port the competition gets greatly reduced. 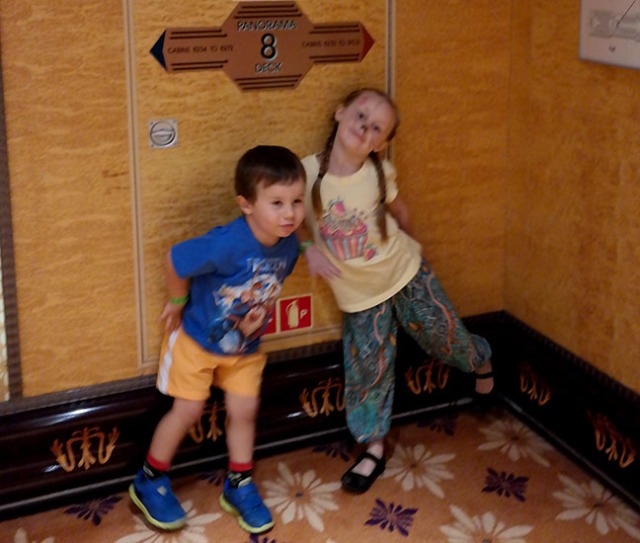 For one item on the list in the digital scavenger hunt the kids had to have a photo of them on each deck. We started at the bottom so by deck 8 they were a bit bored with posing by the deck numbers.

Camp Carnival (or Ocean now on some ships) has all sorts of activities only those passengers with kids enrolled know about. Some of these activities involve competitions of one sort or another, and a chance for the kids to win prizes which may include a ship on a stick. That’s how we got one on the Legend. The kids won it for coming back first with all the required photos in a digital scavenger hunt. John could have traded his two medals for one as well, but chose to give them to the kids instead because they liked the metal ones adults get much better than the plastic ones they got from Camp Carnival. 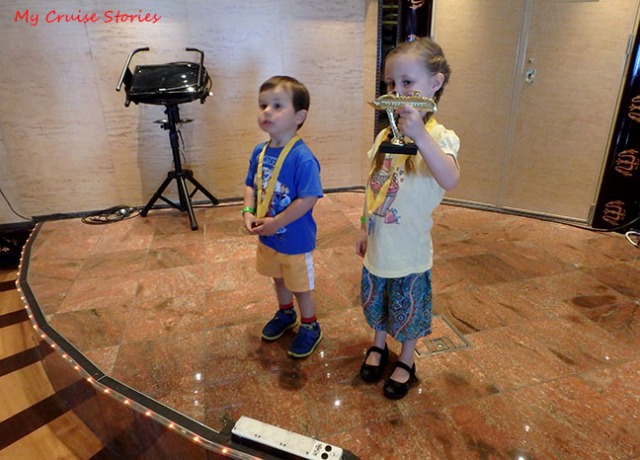 If you want to win a ship on a stick of your own the keys to winning are persistence, trying new games, finding games that suit your knowledge or skills, and taking advantage of opportunities that give you better odds like games that take place in obscure locations or when some of the competition has left the ship. Practice helps too. 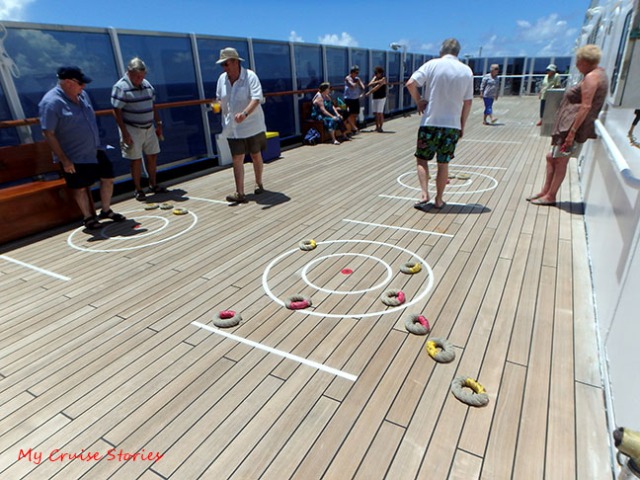 These tactics also apply to other cruiselines and whatever prizes they hand out for their games. Persistence and practice paid off playing deck quoits on P&O Arcadia, a game we never knew existed before that cruise. We went to the competition every day and I did finally win one, although we were just playing for fun and never expected to win. The prize there is a gold sticker which you collect until the end of the voyage and then trade in for merchandise. Just one sticker was good for a nice pen set. More stickers meant options for other prizes.

MyCruiseStories blog tells stories about adventures in cruising on ships big and small. Things to do onboard and in port. Anything connected to cruising. Also food, travel, recipes, towel animals, and the occasional random blog.
View all posts by LBcruiseshipblogger →
This entry was posted in Australia, Carnival, Legend, Shipboard Life, Splendor and tagged Carnival, cruise, cruise ship, games, photos, prizes, ship on a stick, trophy. Bookmark the permalink.

3 Responses to How to Win a Ship on a Stick