Posted on May 6, 2016 by LBcruiseshipblogger

Miami Through the Ecstasy’s Porthole

Porthole cabins are one of the best bargains on Carnival ships because they book as inside cabins, yet you have a view. Some other cruiselines book their porthole cabins as oceanview so they are not as good of a deal there.

We choose cabin R4 on the Ecstasy because the deck plan showed it as larger than the average oceanview cabin. The portholes are not just a small round window in this room, but genuine functional portholes that have covers which they close in stormy weather. They were closed from the previous cruise when we first arrived, but with hurricane danger over by the time our cruise started the steward opened them for us. 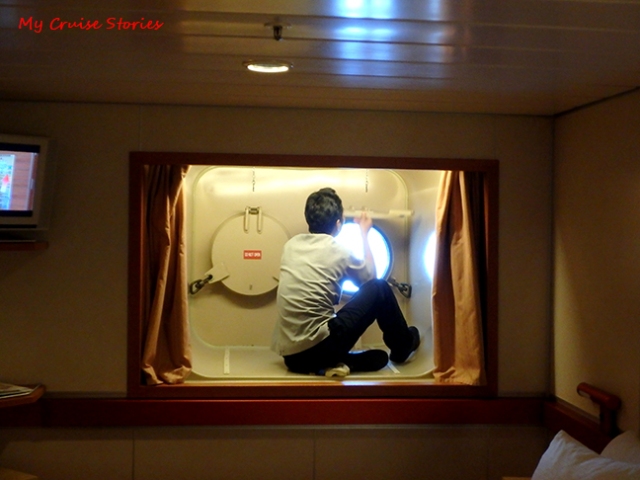 The portholes are kind of like a pair of eyes looking through binoculars. The ship wall is quite thick so it is a long way from the window to the outside edge of the vessel. The window area is big enough a child could sleep there if it had a mattress. 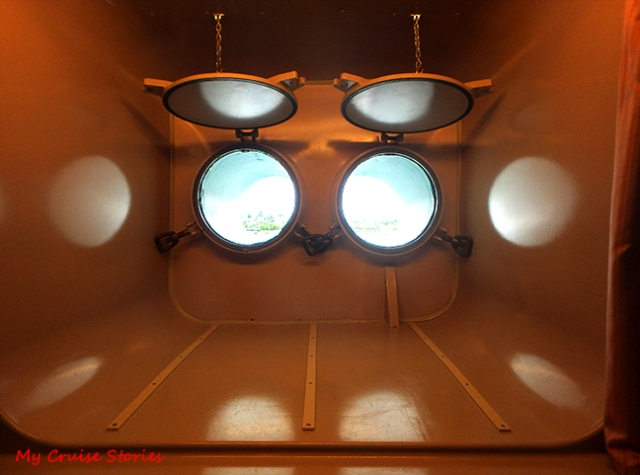 Portholes open upward over big ledge on the Ecstasy

My Australian grandkids would have loved it as a play area. They played on the windowsill of an oceanview cabin and that was not nearly as big as the space in front of the portholes. The area could also work as a place to store things or a cozy nook to sit in if you added pillows.

This cabin had more floorspace than any cabin we’ve had previously, but that was probably partly due to the fact that it just had one small chair and no couch or table as well as to being a bigger room. It had plenty of room to add couch or another chair and a table and still have more floorspace than the average cruise ship cabin.

I loved having the portholes. It’s not as good of a view as a window, but you can still see out. Plus they make for a real authentic on a ship feeling. After the Ecstasy I thought about trying to book a porthole on every cruise. On ships like the Ecstasy that have a lot of porthole cabins they are easy to get, but the newer ships have very few and they book quickly so getting one there is not as likely. 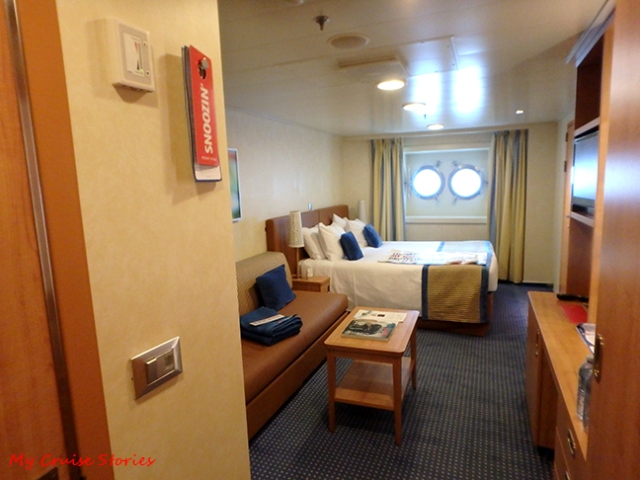 Porthole Cabin on the Breeze is Spacious

We also had a porthole cabin on the Breeze, several cabins back from the most forward one rather than just one back as on the Ecstasy. The ship wall with the portholes in it was not as thick on this one and the shelf not nearly as wide, though still at least double the width of the windowsill to an oceanview cabin. These portholes closed from the sides rather than from the top. The covers are not as heavy as the ones on the Ecstasy, but were still fully functional portholes and not just round windows. This room was also large, but contained a full size couch and a table so it had less open floorspace.

Whether due to calmer seas or the design of the ship I couldn’t say, but we did not feel or hear the sea much on the Ecstasy, but on the Breeze we could often both hear and feel the waves. The Breeze sometimes pounded the waves with both the sound and feel of hitting logs. On a day when the waves were especially big they sometimes sent splashes high enough we could see nothing but the white of spray passing by the porthole while on decks higher up in the same waves we didn’t really notice the sea at all.

The ledge on the Breeze held two weeks of towel animals

When the ship rocks side to side rather then hitting the waves head on it is the opposite. Then you feel the motion more the higher up you go as there is more ship above the water to exaggerate the motion. Up there though you don’t really hear anything unless the walls creak. Even though we had a bouncy night or two sailing through rough seas on the Breeze I would still book a porthole cabin again in the future if I got the chance because a rough night or two are worth having some sort of view and a bigger room at inside room prices.

I would not recommend these rooms to anyone who needs quiet to sleep and can’t function if they don’t get a good night’s sleep every night because good weather and calm seas are never guaranteed on any cruise. If you either sleep through anything or don’t sleep that well anyway so are not bothered by the possibility of a restless night then porthole rooms are a great deal when you can get them.

For more blogs about cabins on a variety of ships see My Cruise Stories Ships and Cabins page.