Posted on March 25, 2016 by LBcruiseshipblogger

Key West is the only US island in the Caribbean and the only completely frost free place in mainland USA. The Old town part of the island formed naturally from a coral reef. The new town is man-made with landfill that doubled the size of the island. A series of Bridges through the keys link mainland Florida to Key West. Former industries include cigar manufacture, salt mining, and shipwrecking. Island residents did not actually wreck ships, they just did not mark a reef that did the job for them. Some island residents grew rich salvaging shipwrecks on the reef until it got marked. The island alternately went from rich to poor as industries built up and then got wiped out at one time or another by hurricanes or their great fire. Tourism eventually revived the economy at a time of downturn and is now the island’s main source of income.

Cruise ships visit Key West as a port stop. Carnival Ecstasy visits once per week, something we felt quite happy about as we had not seen Key West before. The Florida Reef around the keys is the third largest coral barrier reef in the world after Australia’s Great Barrier Reef and the Meso American Reef running from Cozumel to Honduras. Florida Reef is the only living coral reef in the continental USA. This reef has inner and outer ridges of reefs and a total of over 6000 individual reefs within the system. Diving and snorkeling are popular activities in the Florida Keys. Cruise ship passengers can schedule excursions from the ship, book them in advance from an outside source, or check around town to see if any of the little shops offering excursions have something that fits within the time frame they have to spend on shore. 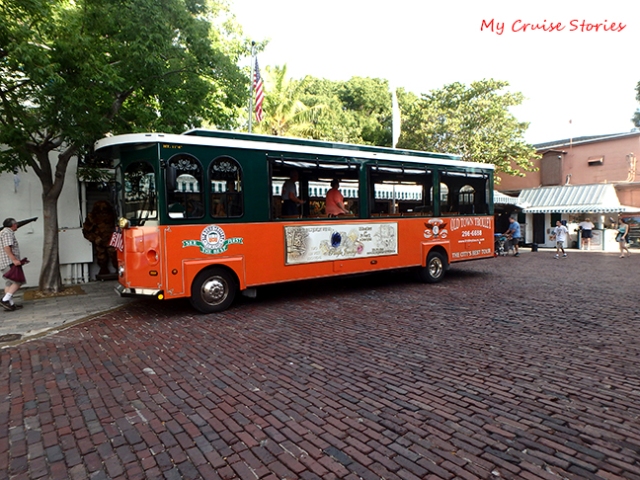 Since we had never been to Key West before we decided to take a tour around the island and see more of it than we could walk to from the cruise ship dock.  We took the old town trolley tour that goes around the whole island. Tickets to this hop on, hop off tour were available for just under $20 each on the ship, a bit of a discount from buying them in town. From the port we walked to stop 1 to board the trolley near the sponge market. At one time Key West had a sponge-harvesting industry. A statue made of sponges stands in front of the market which mainly houses tourist shops. 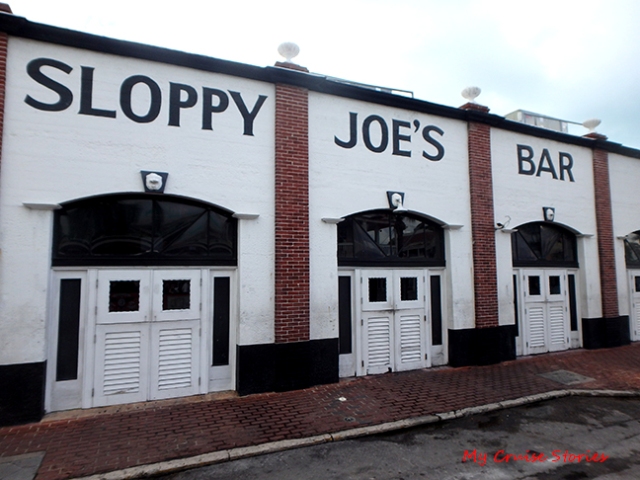 From there the trolley meandered on a narrated journey through the touristy areas of old town, much of which was within easy walking distance of the ship. Besides a lot of old Victorian buildings, old town has several historic bars and plenty of shopping. Several stops gave people options to get out and explore if they so desired. Moving along the trolley came to a lighthouse which is now a museum and Ernest Hemingway’s house which is home to many cats with extra toes, descendants of his pet cat Snow White. The house is a museum and open 365 days a year.

Inside one of Key West’s Historic Bars

After stopping at an old fort the trolley moved on toward the southernmost point of the USA. Riding bikes there from town is popular among visitors to the island and some people get there on their own two feet.

We got out near the southernmost point, which is a big tourist attraction in spite of the fact that it is just a land-based cement buoy with writing painted on it. People can also walk to a butterfly conservatory from that stop. 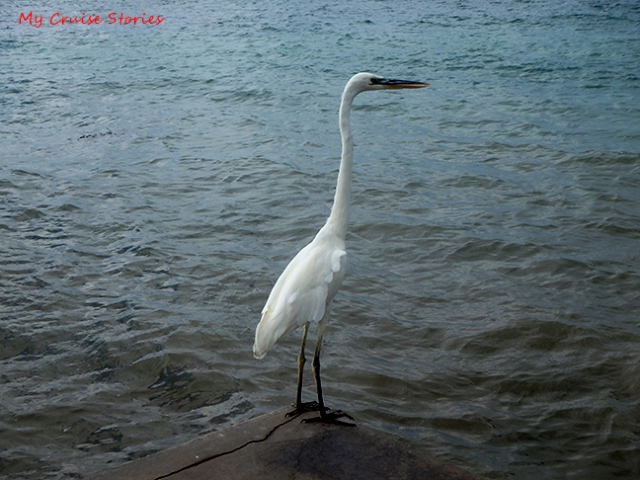 On the way back to the trolley stop we walked out on a pier and found a giant egret willing to pose for pictures. Or at least unwilling to leave its post on a dock behind a fisherman, obviously hoping for a handout. 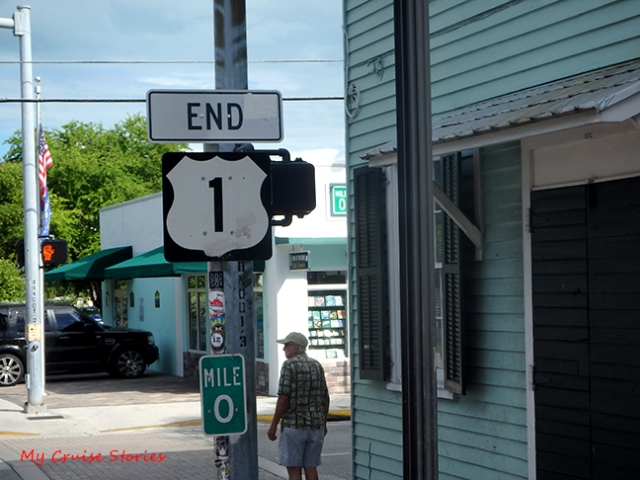 End of the Road

On the way back the trolley made a stop on the outskirts of the touristy area and another one near the lighthouse and Hemingway museums. It also passed by the end (or beginning) of highway 1 and milepost 0.

Cruise ship passengers could find plenty to do right near the ship. There’s lots of shopping and of course plenty of places to have key lime pie in the keys. An aquarium and shipwreck museum sit near the trolley stop at the sponge market and the area has other museums as well. The railroad museum and Ripley’s Believe it or Not aren’t far. There’s lots of old buildings and statues. Conch train tours and trolley tours are available in town for anyone who didn’t get their tickets on the ship. Some little storefronts offer other tours as well including things like snorkeling, parasailing, or glass bottom boat rides. You can find a snorkel tours for under $50 from the local vendors.

manatee mailbox near the southernmost point

When shopping, watch out for the everything is $5 store. They have t-shirts marked as costing $5, but when you go to pay for it they may charge you $5 for the shirt and $5 for the decal so you end up spending twice what you intended. 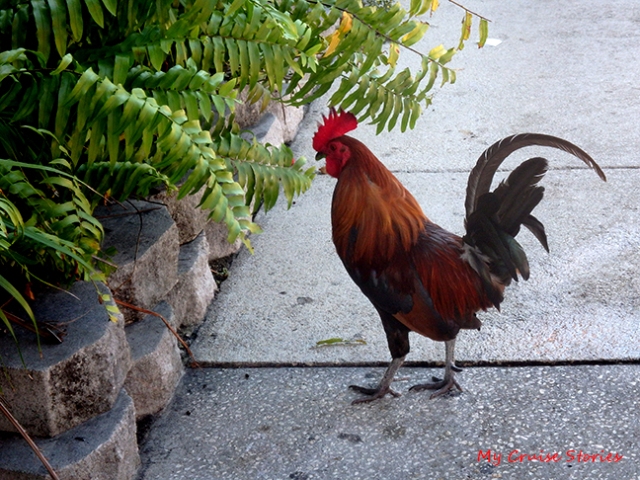 Rooster wandering down the sidewalk

Feral chickens run free on Key West, descendants of chickens owned by early residents. Their population tends to expand beyond what the island can support so the wildlife center re-homes hundreds of them, often to organic farmers who use them for bug control. You don’t have to look hard to find them, just walk around anywhere. 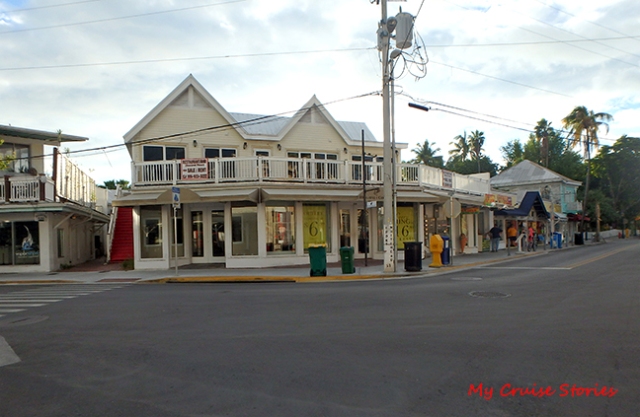 We enjoyed our visit to Key West. I’d love to go back sometime and check out the snorkeling.

MyCruiseStories blog tells stories about adventures in cruising on ships big and small. Things to do onboard and in port. Anything connected to cruising. Also food, travel, recipes, towel animals, and the occasional random blog.
View all posts by LBcruiseshipblogger →
This entry was posted in Carnival, Ecstasy, Ports of Call, Shore Excursions, USA and tagged cruise, Florida Keys, hop on hop off bus, island, Key West, port, southernmost point, things to do in Key West, tourist attractions, travel, Trolley Tour. Bookmark the permalink.