Posted on October 9, 2015 by LBcruiseshipblogger 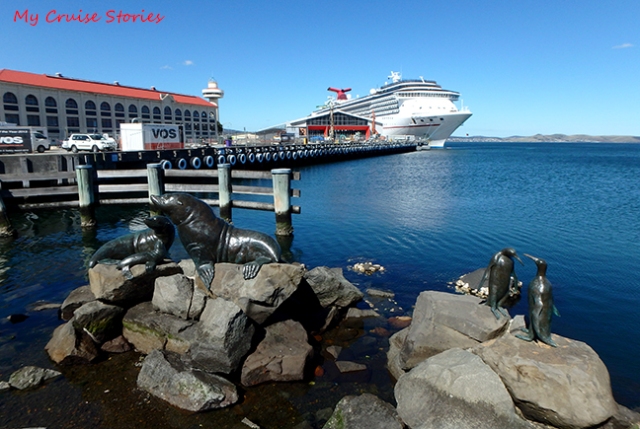 Carnival has programs for kids from ages 2 through 17.  Older teens go to Club O2 where they can socialize with other kids their age and attend planned activities like dances or scavenger hunts.  Tweens and younger teens hang out at Circle C where they can play computer games or participate in group activities. The younger set go to Camp Carnival (which is morphing into Camp Ocean on some ships now).

My Australian grandkids were quite happy to find out they could attend the same group in Camp Carnival with 3-year-old Daniel and 5-year-old Hannah both falling into the same age category.  On boarding day we toured the Camp Carnival room.  The kids wanted to stay and play.  They were sad to find out it was only open for tours that day.  One of the camp counselors showed people around the room, but never mentioned a thing about pre-registering the kids. 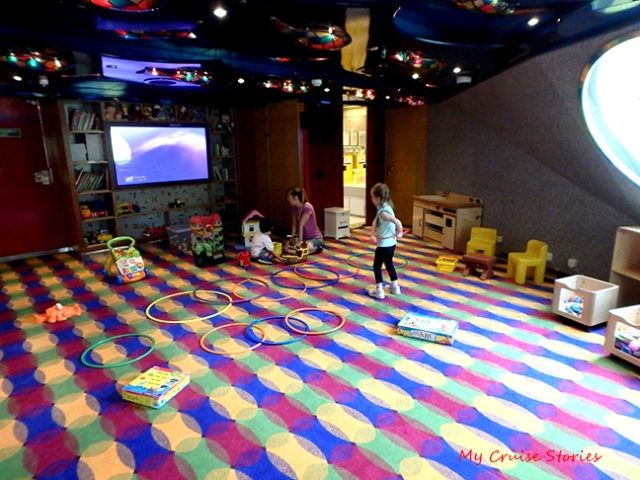 The next day the kids were anxious to go play at Camp Carnival.  After waiting through a long line to drop them off we found out they had to be registered first.  Someone behind us in line said he’d randomly come across the registration somewhere else the day before while wandering about the ship.  We had to go to the next room and wait in another line to register the kids.  Luckily this was a one time thing and through the rest of the cruise it didn’t take long to drop the kids off.  It definitely would have been helpful if on embarkation day they had offered pre-registration in the Camp Carnival room or at least told every person who came in where to find it.

Upon registration each child got a tag with their name and age to wear while at Camp Carnival.  When they checked out their tag went on a board in front of the door where it would be handy the next time they checked in.  Camp Carnival had specific hours when kids could be dropped there randomly to play. They couldn’t just stay all day.  Certain times throughout the day they had family activities or specific projects and only those involved with those activities could attend so others had to be picked up before the activity started.  I don’t know if it is always like that or if this was an Australia thing because that is the only time I have cruised with kids of Camp Carnival age. 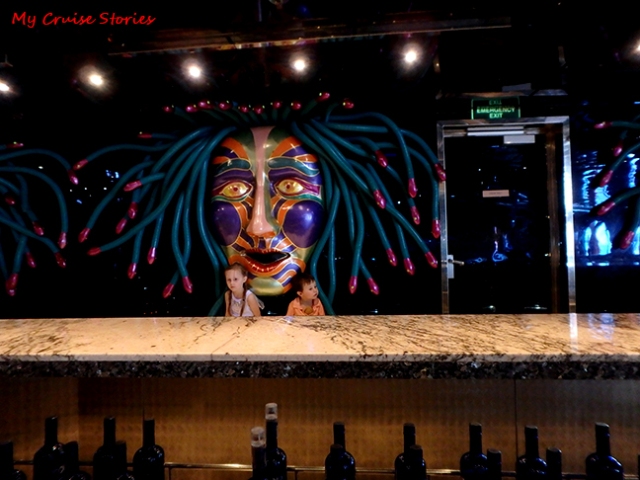 Sometimes Camp Carnival had activities outside of their designated room. They gave the parents of enrolled kids a schedule of what took place and when and these activities were not listed in the daily Fun Times given to all passengers on the ship.  The grandkids didn’t go to any of their kid’s dinners on the Lido, but they did join in a couple of Camp Carnival’s other outside activities.  One day they had a digital scavenger hunt.  The kids met up at Medusa’s Lair Lounge and then went off with their families to gather all the pictures on the list they were given, or at least as many as they could get in the 45 minute time period given. 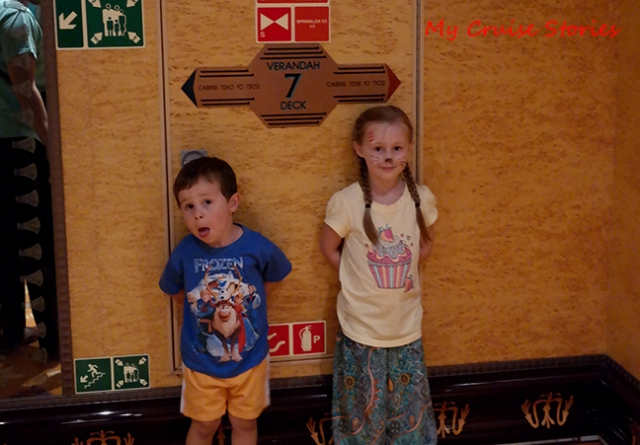 They ran up the stairs all the way from the bottom to top of the ship, stopping for a photo at each floor

We started with the pictures of the kids on each deck, of which they were not allowed to use elevators while taking.  It didn’t take too long to run up a floor of stairs and then stop by the elevators to take a picture of the kids at the floor level number, which gave definite proof of them on that deck. 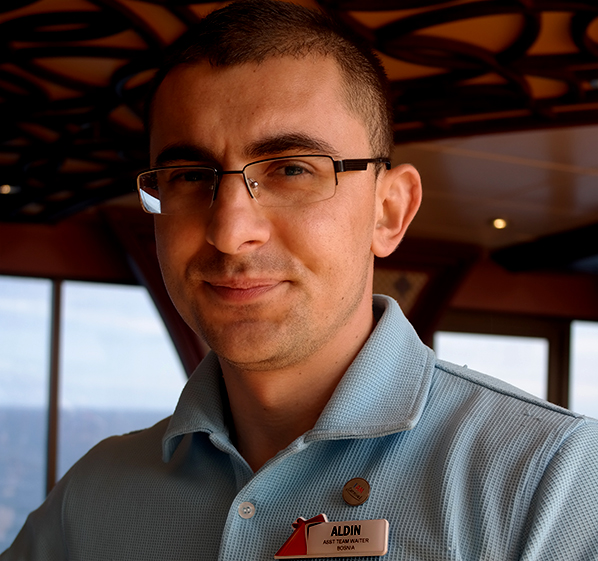 A family member with ice cream on their face was easily handled at the ice cream machine on the Lido – hand a small kid an ice cream cone and it doesn’t take long before they have ice cream all over their face.  Name tags of ten different crew members from ten different countries proved a bit more challenging as many of them come from either Indonesia or the Philippines. Crew members we couldn’t use as we already had that country were quick to point out any other crew member in the area from somewhere else though, and we ended up with a bonus 11th country in the end. 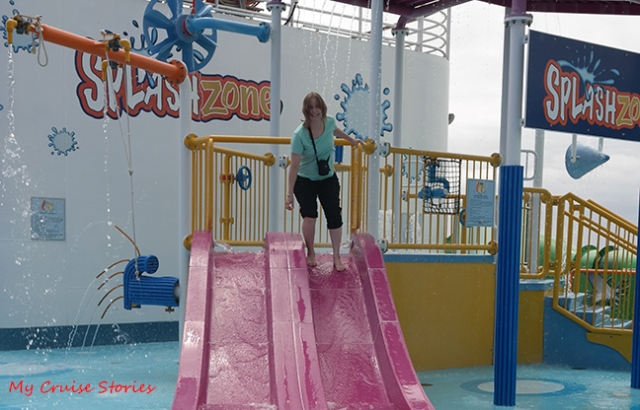 helping the kids out with their Camp Carnival photo scavenger hunt

It was a bit of a cold day for a family member on a waterslide and we really didn’t have time to change into suits, but I took off my shoes, rolled up my jeans and went to the kiddie slide only to find out you have to go through sprays of water to get there. Oh well, got the photo. A smiley face drawn on Daniel’s forehead, Hannah and I in the shallow bit of the pool and doing the funky chicken, and random people gathered into a conga line on the lido later and we finished our list and headed back to the Medusa’s Lair Lounge. 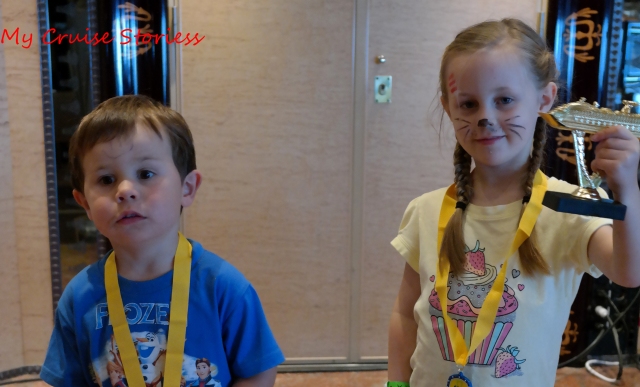 The kids show off their scavenger hunt winnings

Everyone who participated in the Camp Carnival photo scavenger hunt got a medal.  Plastic Camp Carnival medals for the kids and the real ship medals like they hand out for the adult games for the adults. We got back first and they gave the kids a ship-on-a-stick trophy along with their medals.  A ship on a stick was a major prize on that cruise, for the adults anyway.  It took adults winning two medals to trade for a ship on a stick to get the trophy in the regular games.  They told us the kids got the trophy for being first, but since they took it out of a box full of trophies I have to wonder if they actually gave every group one or just happened to have the whole box there because they had ran out and had to get a new supply for Camp Carnival activities.  They had to cut open the previously unopened box to get one out for the kids so it was definitely a new box.  We didn’t stick around to find out if any later arriving kids got a trophy though.

One night John and I went to a magic show in the main theater.  The cruise director  kept making announcements that day about the costumes in this show not being appropriate for kids to see.  Sheri and the kids did not go due to his warnings.  Lo and behold just before the show started, who should file into an entire balcony section but the camp carnival kids.  I can only imagine what all the parents who had sent their kids to Camp Carnival so the parent could attend the “inappropriate” show child-free thought then.  The show was excellent and while the costumes did resemble lingerie, kids see far more revealing outfits at the beach or pool and anyone old enough to know what lingerie is would be too old for it to be inappropriate.

We wondered how many kids missed a great show because of the cruise director’s announcements.  If the Camp Carnival kids are attending a show they should be confident that show is appropriate for children and not warn parents against bringing their kids to see it.  If they are going to make warnings against children seeing a particular show then the Camp Carnival kids should not be there. 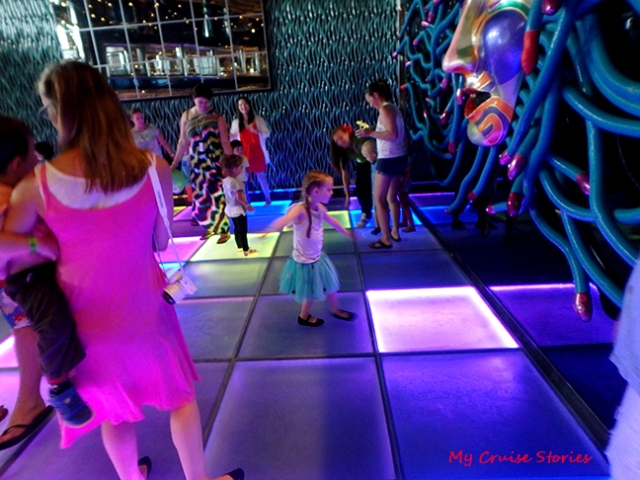 On the last sea day Camp Carnival had a good-bye party at the Medusa Lounge where the kids had lots of fun dancing and batting balloons around. They had some free dance time and a lot of little games and even a contest in the dances to keep it fun and interesting for small children.  Both of them really enjoyed Camp Carnival. 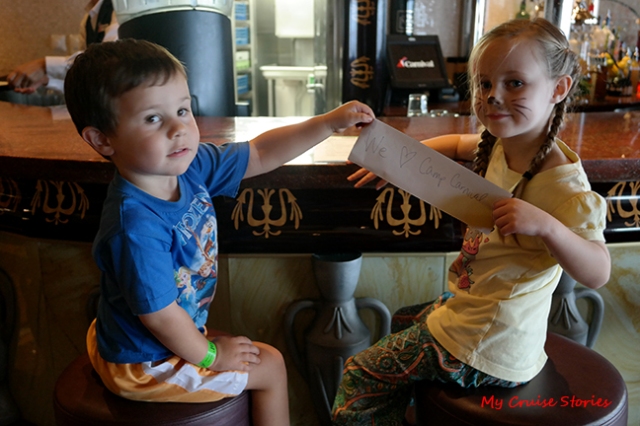 MyCruiseStories blog tells stories about adventures in cruising on ships big and small. Things to do onboard and in port. Anything connected to cruising. Also food, travel, recipes, towel animals, and the occasional random blog.
View all posts by LBcruiseshipblogger →
This entry was posted in Australia, Carnival, Legend, Shipboard Life and tagged Camp Carnival, Carnival, cruise, cruising with kids, fun for kids. Bookmark the permalink.