Posted on October 17, 2014 by LBcruiseshipblogger

How To Fold a Towel Monkey

How to Fold a Hanging Towel Monkey Body

The hanging towel monkey uses the standard towel animal body.  Lay bath towel flat and roll both ends to the center from the short sides.

roll the other end to the center for two equal rolls

Fold rolled towel in half with the rolls to the outside.  Pull the tip out of the center of each roll.

If you lack the hand strength to pull the whole thing at once, pull as much as you can to get it started and then use one hand on each end of the same roll to pull one side at a time.

To hang the monkey, either use two clothespins to pin the arms to a hanger, or tie a string around the ends of both arms and hang it over a curtain rod, hook, or whatever is available to tie it to. 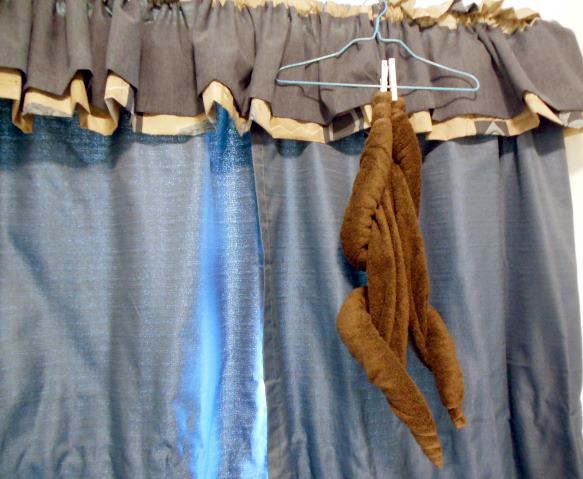 How To Fold An Open-Mouthed Monkey Head

Fold a towel in half across the short side.

Fold the hand towel in half across the short side.

Fold in half again.  You have several options depending on how you want the finished monkey head to look.  The open edges on the short end will always be where you fold your triangle points.  If they are on the top side of the towel, they will be the top lips on the finished head.  If they are on the bottom side of the towel, they will end up as the bottom lips.  Then you can decide if you want to open the mouth between the two open edges so that the towel hem makes a lip, or for a wider open mouth you can leave those edges together and open between folds so one lip is both open ends together and the other is a folded edge .

The open edges are folded across the towel in this triangle.  Because they were on top before folding the triangles, they will end up as upper lips when this head is done.

Fold one side over from center to form a triangle.

The open edges now face each other in the center.  They are now under folded edges and will come out as upper lips.

Here the open edges started out on the underside of the towel so are now on top. They will end up as lower lips.

Fold the other side over from center to form a second triangle.

fold the top triangles to the back, away from each other so the open edges that were at the center are on the outside once the two smaller triangles are folded together

Folded into a small triangle with open edges on the outside.  This one will have the open edges as lower lips.

Fold the two triangles into one with the back sides together and the open ends on the outside of the center fold.

Fold down the corners of the loose ends of both sides of the triangle so there are no points sticking up. 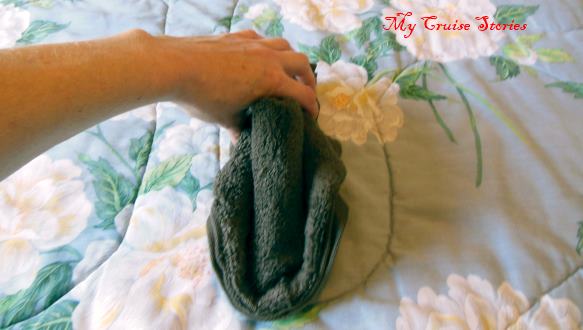 the head does not hold its shape on its own, but the monkey’s arms will hold it together once it gets tucked between them

Fold down corners on both sides of triangle.

mouth opened between the open ends 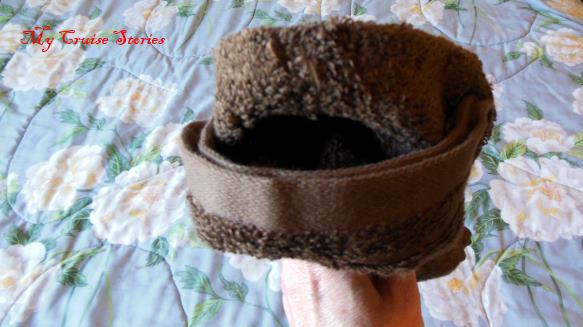 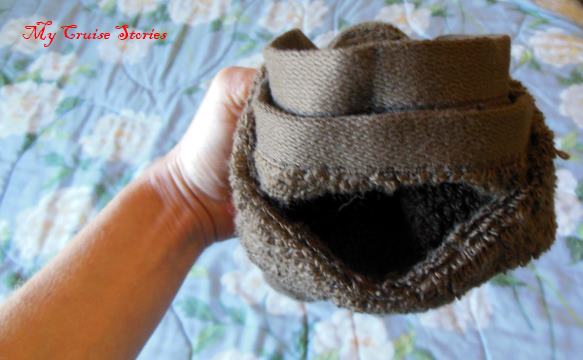 mouth with open edges as upper lips, but opened between the layers on the open end

Use felt or red paper to make a tongue that highlights the open mouth.

head tucked into the arms

Tuck head between raised arms of hanging body.   Add eyes (googly eyes, or eyes made of paper or felt) or sunglasses.  Add any other decorations desired, such as the pom pom nose on this monkey.  Adjust body and legs to keep center as closed as possible. 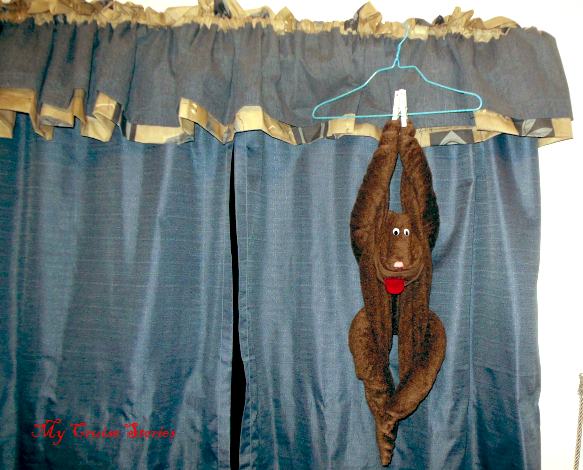 For a completely different option on how to make the head for an open-mouthed towel monkey, check out this video with Bagus from MSC Divina, who has his own way to make a towel monkey with an open mouth.

For instructions on how to fold all sorts of other towel animals, please visit My Cruise Stories Towel Animal Page.

MyCruiseStories blog tells stories about adventures in cruising on ships big and small. Things to do onboard and in port. Anything connected to cruising. Also food, travel, recipes, towel animals, and the occasional random blog.
View all posts by LBcruiseshipblogger →
This entry was posted in Towel Animals and tagged different ways to make towel monkey head, how to fold towel monkey, monkey with open mouth, towel animal folding photos, towel animal instructions, towel animals, towel monkey. Bookmark the permalink.