How To Fold a Towel Penguin

Posted on March 2, 2013 by LBcruiseshipblogger 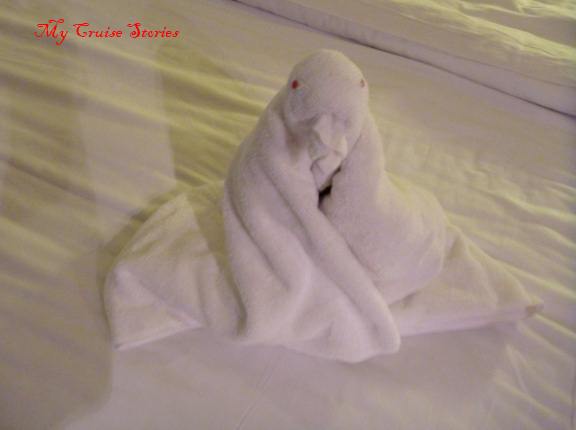 How to Make a Towel Penguin

On a recent cruise on the Norwegian Pearl, our cabin steward Rosario made the towel penguin pictured above for us one day.  I had not seen a towel penguin before, but thought that with the right colors and a few embellishments it could really come to life.  This is a very easy animal to make and one of the cutest so it’s a good starter animal for inexperienced towel animal folders.

If you’re a Lilla Rose fan, watch for the Princess Tiara Dangle flexi clip in the video

How To Fold a Towel Penguin Head

lay the black washcloth out flat

fold washcloth in half diagonally

fold over the long edge of the washcloth

fold washcloth in half with the long folds on the outside

fold long ends all the way together and set head aside

How To Fold an Easy Towel Penguin Body

Lay the bath towel out flat

fold towel in half crosswise 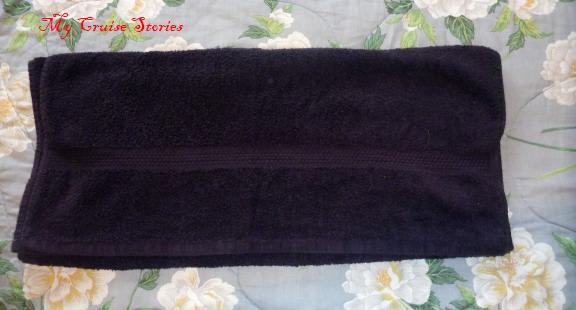 fold towel in half crosswise again

fold corner down from not quite the center so that the fold comes near the edge, but not all the way to it

fold over the other corner

How To Assemble the Towel Penguin 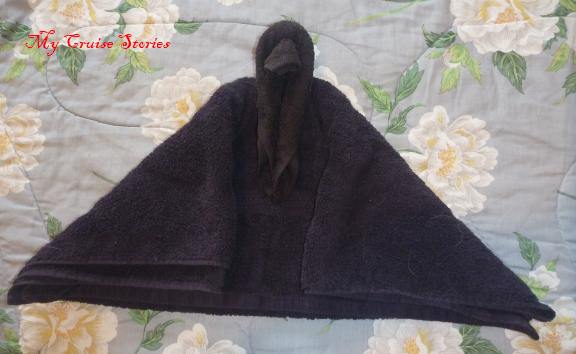 Place the head between the folds on the body so that the long parts are within the body and only the round head bit sticks above it. You can stand the penguin up at this point and decorate it if you want a one-color penguin.

For optional white belly, lay the white washcloth out flat 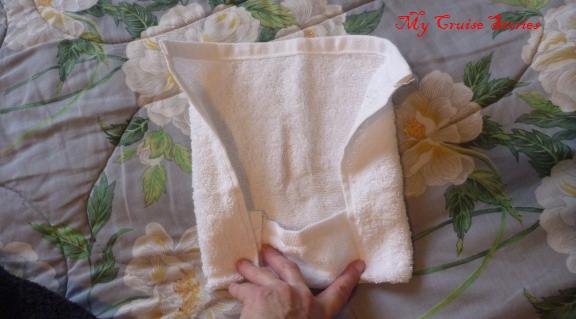 Lay the white washcloth onto the black penguin body with the folded edge at the top. Adjust the folds so it sits from the bottom edge of the corner folds of the black towels to an inch or so under the rounded part and beak. 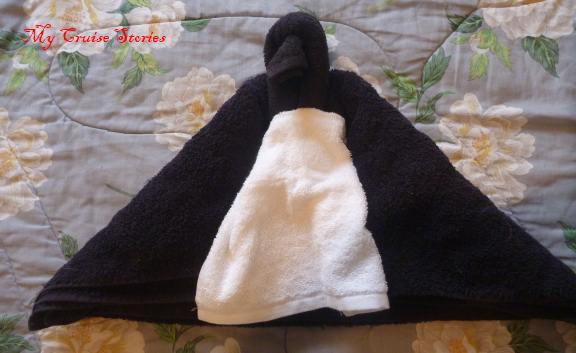 fold both sides of the black towel to the center, making sure it is tight just below the head and stand the penguin up

After standing the penguin up, adjust the head, wings and belly as desired until it looks like a penguin

penguin feet made by folding a pipe cleaner into three sections

For instructions on how to fold a whole bunch of other towel animals click here or here or visit the towel animal page.

Coming up next in towel animal folding:  Towel Pigeon

MyCruiseStories blog tells stories about adventures in cruising on ships big and small. Things to do onboard and in port. Anything connected to cruising. Also food, travel, recipes, towel animals, and the occasional random blog.
View all posts by LBcruiseshipblogger →
This entry was posted in Pearl, Towel Animals and tagged cruise, cruise ship towel animals, easy towel animals, how to, penguin, photos, towel animals, towel bird, towel penguin, video. Bookmark the permalink.

10 Responses to How To Fold a Towel Penguin