Posted on June 17, 2014 by LBcruiseshipblogger 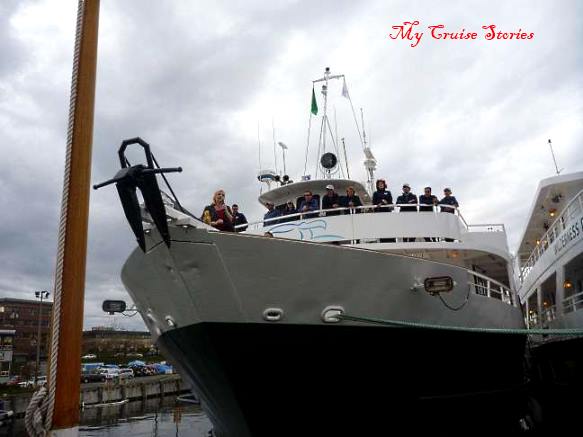 I visited the Wilderness Adventurer again the next spring at their home port in Seattle’s Fishermen’s Terminal for a double ship christening after the renovations were finished.  They had a nice ceremony with a different person giving a speech and breaking the christening bottle of champagne on each ship.

Four years later the company has grown quite a lot. They have more ships, more itineraries, and have united American Safari and InnerSea Discoveries together under the name Un-Cruise Adventures.   It’s called an un-cruise because unlike the big ships that can only go to big ports, these smaller vessels visit quaint small towns and anchor in uninhabited coves.  Off-ship activities like hiking, kayaking, paddle boarding and skiff tours don’t cost extra on these small-ship cruises.

Passengers on a skiff from the Wilderness Adventurer

The ship is small enough that at least some of the crew remembers your name.  Other passengers often seem like old friends even if they just met when they came on board.  Daily activities follow a flexible schedule depending on weather, wildlife sightings, and which activities passengers prefer.

A smaller ship does mean smaller cabins, but since the ship mainly travels at night and guests spend time daily on shore or enjoying water activities the cabins are mainly just for sleeping in.  All guest cabins on the Wilderness Adventurer have view windows.

Wilderness Adventurer holds 60 guests in 30 cabins.    Hooks outside the rooms make a place to keep things like coats or rain gear handy and out of the way though the rooms do have quite a lot of storage space for people’s things.

Following dinner,Captain Ron talked about weather and the next day’s activities

Twenty-five crew members  work a variety of positions from captain and bridge officers to deckhands and expedition guides to galley crew and stewards.

The ship is 160 feet long and 39 feet wide.  Next to a big cruise ship it would seem small, but docked in a small-town marina it looks huge.  Wilderness Adventurer cruises at a speed of 9.5 knots.  It was built by Blount Boats in 1984 and renovated for the current owner in 2011.  Renovations included an underwater bow cam so guests can see what’s under the sea on the flat-screen TV’s in the lounge or in their cabins.

All cabins have a flat screen TV

Once again we had an excellent adventure testing the first run of a new itinerary – this time locally around the Olympic Peninsula and San Juan Islands. In spite of a rainy start at our first stop everyone had a wonderful time.  This beer-themed cruise included tours of craft breweries and onboard tastings of local craft beers which all the beer-loving passengers enjoyed immensely. 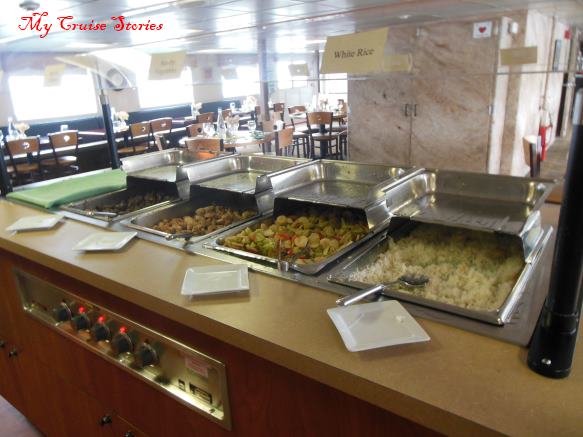 During our cruise, breakfast and lunch were served buffet style and dinner usually in sit down and order fashion, though ordering half and half of a couple of the offered choices was quite popular among guests.  The tasty food served at each meal changed daily.

The kayak launching dock on the back of the Wilderness Adventurer allows guests to get in and out of the kayaks in a dry area, making it quite easy for first time kayakers and a breeze for experienced paddlers as well.

Some passengers had done the Alaska trip on this ship previously and had such a wonderful time they returned specifically because the same ship had a new itinerary. She’s back to Alaska for the summer where other guests can visit glaciers, hike or kayak in the wilderness, and look for wildlife including whales and bears .   Come fall or next spring the Wilderness Adventurer will run the Coastal Washington itinerary again so it’s not too early to plan ahead and book this great adventure.   If you like beer, all the beer-themed activities are an added bonus on this cruise.