How to Fold a Towel Squid

Posted on June 9, 2014 by LBcruiseshipblogger

When I posted the blog about how to fold a towel pigeon, I got a comment from my son (the very same person who had said my towel crab needed more legs) saying one of the partially folded photos looked like a squid and that I should do a blog on how to make a towel squid.  So here it is, from pigeon to squid.

3. Eyes and any other desired embellishments

Instructions for Folding a Towel Squid

Find the center of one long edge of the hand towel.  Hang it on a hook on the wall, or if no hook is available or you just prefer to do it that way, tuck it under your chin. 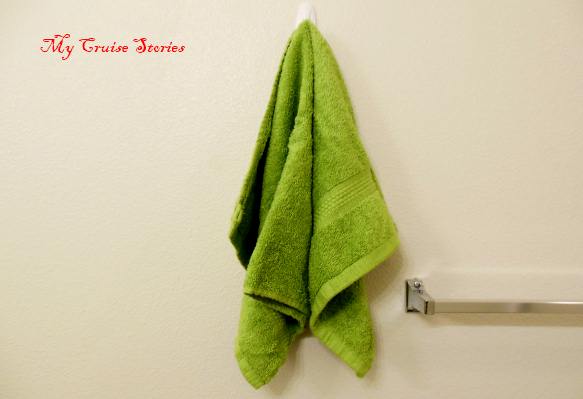 whether you hang the towel from a hook or tuck it under your chin, the key is to get the ends rolled tightly

Tightly roll both edges to the center.  While you want your hands near the top pointy end for birds to get that end good and tight, for the squid it is better to hold the bottom end.  You need the bottom end tight for it to hold its shape, and you don’t want the top end to curl, as it does when very tight (which is desirable for birds, but not squids.)

Set the rolled towel down with the rolls underneath the towel.  Fold the bottom edge up just a bit to help it hold its shape and to make the legs a tad longer.

both sides of towel rolled together, this side with the rolls goes underneath

Lay the washcloth out flat.  Start from one corner and roll until you reach the opposite corner. 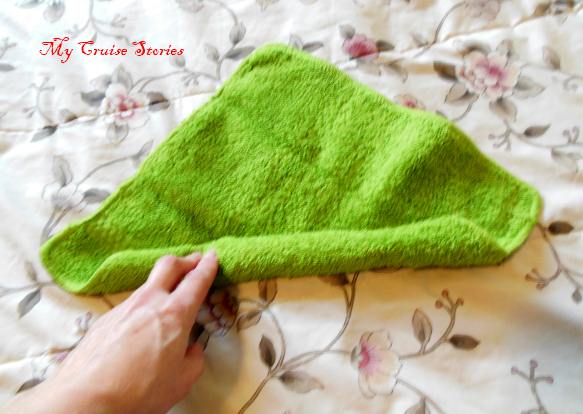 roll the washcloth from corner to corner

Bend washcloth into a U shape and insert bent side under the folded edge of the squid body between the other two legs.

Now it has 4 legs instead of 2, which is still not as many as a real squid, but since this squid lies flat we will just imagine the other legs are hidden underneath where we can’t see them.  Or roll two more wash cloths and add more legs.

Decorate squid as desired.  I tried humanizing it by adding a nose and mouth as well as eyes, but since real squids do not have that sort of face I liked mine better with just the eyes. 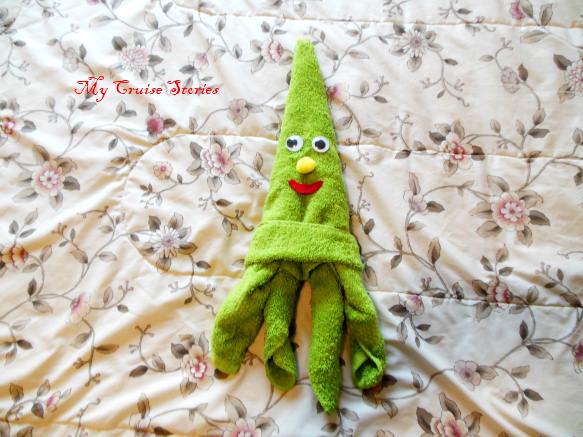 My Cruise Stories has a whole series on towel animal folding with instructions for making all sorts of other towel animals.

MyCruiseStories blog tells stories about adventures in cruising on ships big and small. Things to do onboard and in port. Anything connected to cruising. Also food, travel, recipes, towel animals, and the occasional random blog.
View all posts by LBcruiseshipblogger →
This entry was posted in Towel Animals and tagged crafts, fun, photos, squid, towel animal, towel art, towel folding, towel origami, towel squid. Bookmark the permalink.

4 Responses to How to Fold a Towel Squid