Posted on October 19, 2013 by LBcruiseshipblogger

I used to wonder why anyone would pay for food on a cruise ship when you can get all the food you want and then some at no extra charge.  The dining room serves multi-course meals and there’s always a buffet.  Cruise ships also offer room service, often for free.  But they also all have at least one eatery that has a surcharge, often more than one.

The waiter brought us each an extra appetizer before the ones we ordered.

On my most recent cruise on Holland America’s Westerdam, I had the opportunity to experience the regular dinner service at the Pinnacle Grill, their fancy restaurant.  The dinner there is definitely worth the extra charge, but those wishing to spend less money to try the food there can make reservations for lunch instead.  It is a different menu for lunch than for dinner though. 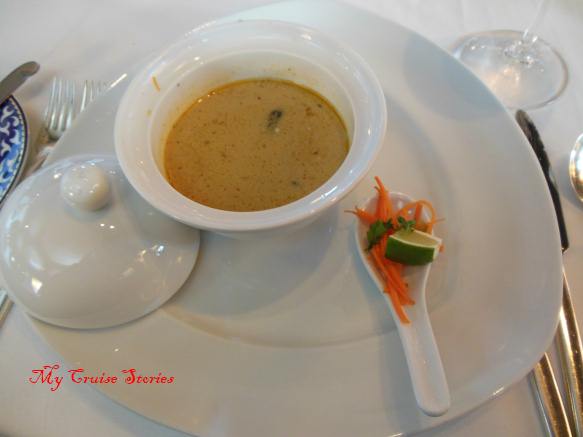 Pinnacle Grill has some tasty soup

We had great service with two waiters for our party of five.  The menu had lobster available in several dishes, including lobster macaroni & cheese.  The first course had a variety of soup and salad options for the appetizer.  We all chose something different and everyone liked what they got.  Certain menu items include some tableside preparation.

For the main course, my sister ordered the lamb kabob.  This the waiters brought to the table with a cart where they flambéd it tableside before moving the food from the skewer to a plate and serving it.  My father’s baked Alaska came to the table in a similar manner.  It kind of provides a bit of a show with the meal when they do that.

A delay in dessert service brought us these awesome truffles

Our dessert had a bit of a delay, so in the meantime they served a dish of homemade truffles in several varieties, all very rich and delicious.  The dish of truffles alone would have made an excellent dessert, and had more than enough for everyone. 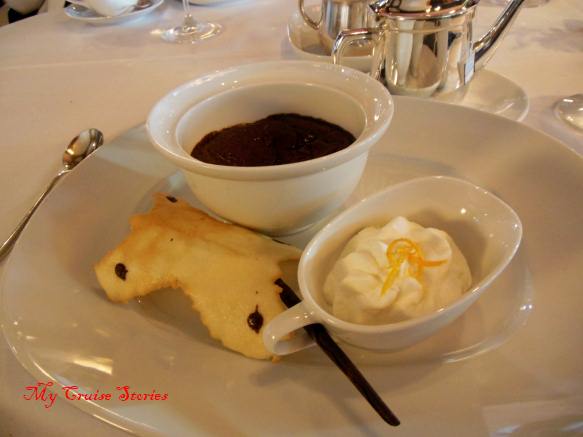 too much good stuff

I expected a small cake with a molten center when I ordered the chocolate lava volcano, but instead got a large pot of melty chocolate goodness.  More than I could eat following such an excellent meal.

I ordered soup for my starter, and a stuffed chicken breast for the main course.  They also added a small bowl of the lobster macaroni since I had inquired about that, as lobster and macaroni and cheese aren’t normally things people put together.  They worked well together though, it tasted quite good.  My dad tried the broiled lobster tail, which he liked quite well.  I probably would have ordered the lobster too except we had just had lobster the night before at the formal night dinner in the dining room.  They cook it differently at the Pinnacle Grill though. 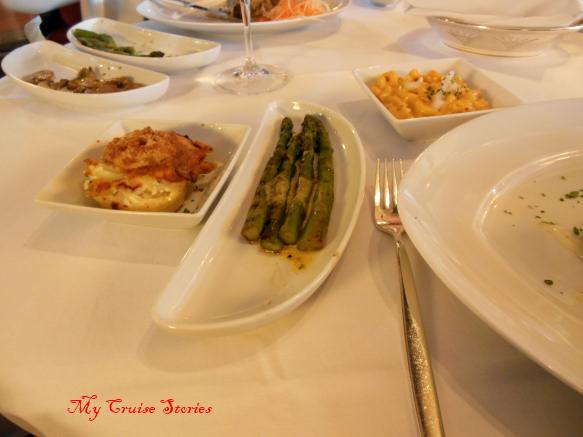 side dishes of potatoes, asparagus, and lobster macaroni & cheese

I also enjoyed my chicken and had more than enough to eat before dessert came, but it’s a cruise so people live it up and I’m no exception.   Besides the chicken I had the regular sides of asparagus and potatoes plus they’d brought me the lobster macaroni as well.  There’s a reason everyone says people gain weight on a cruise!  (We do try to curb the weight gain by avoiding elevators and always taking the stairs.)

It’s not just the food at the pay-extra eateries that make for a special dinner, it’s the service and the extra little things included with the delivery and the whole ambiance of the venue that make the experience worth the extra charge. 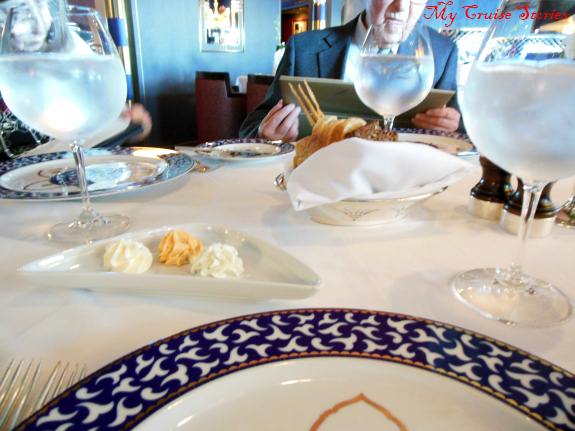 pre-meal bread came with a dish of fancy butters

MyCruiseStories blog tells stories about adventures in cruising on ships big and small. Things to do onboard and in port. Anything connected to cruising. Also food, travel, recipes, towel animals, and the occasional random blog.
View all posts by LBcruiseshipblogger →
This entry was posted in Cruise Food, Shipboard Life, Westerdam and tagged cruise food, Holland America, photos, Pinnacle Grill, travel, Westerdam. Bookmark the permalink.