Posted on October 8, 2011 by LBcruiseshipblogger 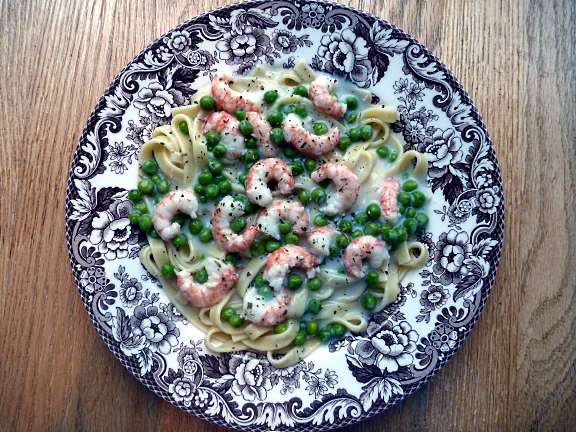 shrimp in the shell

Sometimes my husband likes to throw down a shrimp pot when he goes fishing.  Since he uses underwater lights on his shrimp pots, he catches a lot of them.  Of course, that means finding new ways to cook them.  I also discovered lavender pepper at a lavender farm in Sequim, and like to find new uses  for that as well.  So I thought I would combine the two and try a new pasta recipe.  It turned out quite well.  It is also quick and easy to make.  Except peeling the shells off the shrimp.  That takes a long time, but starting with already peeled shrimp would solve that problem.

shrimp out of the shell

With shrimp in the shell, start with about double the intended end weight.  Mine weighed over 10oz in the shell and nearly 6 without shells.

One word of warning on the lavender pepper though.  It tastes really good, but a little bit goes a long way, so careful not to overdo.

1/8 teaspoon salt, or salt to taste

Mix butter, milk, salt, lavender pepper, and cornstarch in a pan and cook stirring frequently until sauce boils and thickens.  Stir in shrimp and peas and keep stirring until shrimp heats through.  Serve over cooked pasta.  I used fettuccine, but any pasta would work.  Garnish with a sprinkle of lavender pepper if desired.  Serves 2.

MyCruiseStories blog tells stories about adventures in cruising on ships big and small. Things to do onboard and in port. Anything connected to cruising. Also food, travel, recipes, towel animals, and the occasional random blog.
View all posts by LBcruiseshipblogger →
This entry was posted in recipes and tagged cooking, easy meals, food, lavender pepper, pasta, recipe, shrimp. Bookmark the permalink.